The Oppo Reno Ace is equipped with a 6.5-inch display with a 1080x2400px resolution in a 20:9 aspect - that would be a 405ppi density. It's an HDR-capable AMOLED panel that supports a 90Hz refresh rate. A reasonable assumption would be that the display is shared between several models in the BBK portfolio of sister brands like the Realme X2 Pro and OnePlus 7T, even though the 7T lists it as 6.55 inches in diagonal. 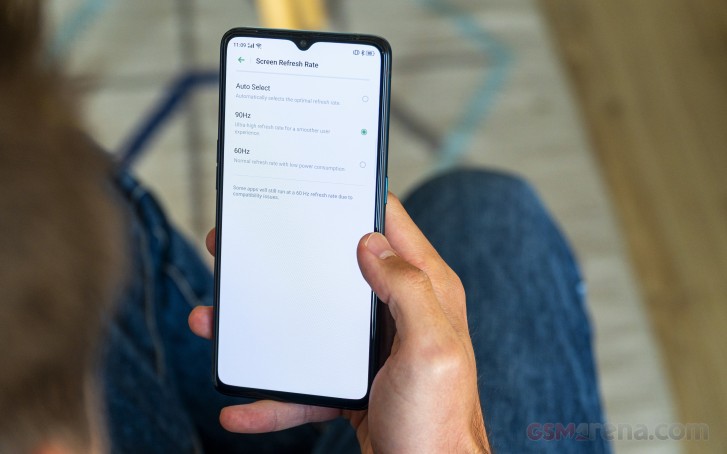 The maximum brightness we measured on the Oppo Reno Ace was 717 nits when exposing the phone to direct light with the auto-brightness toggle engaged. The reading was 511nits when adjusting the slider manually. The numbers are relatively similar to the ones we got out of the other two phones we mentioned above, further reinforcing our suspicions it's the same exact panel. Regardless of that, the results are really great.

We're not quite as excited about the color accuracy, though it's not strictly bad. The Reno Ace has two separate controls that affect that - a Color Temperature Adjustment slider that goes from Cooler to Warmer with Default in the middle, and a Color Mode setting that can be either Vivid (targeting the DCI-P3 color space) or Gentle (for sRGB content).

Out of the box, the Reno Ace comes with Default on the slider and Vivid on the color mode. In that state, we got a 3.9 average deltaE with a 9.5 maximum when examining color swatches against their DCI-P3 targets. In Default/Gentle mode we were looking at a 3.7 average deltaE and the same 9.5 maximum, only for sRGB targets.

The main issue in both cases is the strong shift to blue in the white swatch (that 9.5 maximum) and the grayscale (generally around 8). The Warmest setting on the slider does alleviate that, reigning in the whites to a deltaE around 5 and a very good average of 2.8 - both for the Vivid mode and P3 targets, and the Gentle mode and sRGB targets.

The Reno Ace's display is HDR capable, and we did watch a bunch of HDR videos on YouTube on in. Much like the vivo NEX 3 5G, however, the Reno Ace didn't trigger Netflix to run in HDR. Oh, well.

The Oppo Reno Ace has a 4,000mAh battery at its disposal, pretty much a standard capacity for this combination of display size and chipset. The Realme X2 Pro has the same capacity, while the OnePlus 7T's cell is a bit smaller at 3,800mAh. The Xiaomi Mi 9 Pro, which looks like a solid competitor, but we haven't seen yet in person, has the same 4,000mAh capacity too. Meanwhile, the Galaxy S10+ has 100mAh on top of the Ace's capacity, and the Huawei Mate 30 Pro is the most loaded at 4,500mAh.

The Reno Ace, um... aced our battery tests, posting a particularly impressive endurance in video playback, to the tune of 21 full hours. That's better than the OnePlus 7T's 18 hours and the Realme X2 Pro's 17:23h result - the Reno Ace apparently has further optimizations not available to these other two? Anyway, the S10+'s otherwise not-too-shabby 14:53h result pales in comparison.

At a little over 30 hours of call time, the Reno Ace outlasts all of these - an hour more than the 7T, 3 hours more than the X2 Pro, and 6+ hours on top of the Galaxy. For anyone still concerned about voice call longevity, that is.

In the end, the Reno Ace gets an overall Endurance rating of 99 hours - we'd call that excellent. We tested it at 90Hz only (the forced always-on 90Hz, as opposed to the auto mode) since we figured the minor differences we observed on the 7T between 90Hz and 60Hz modes weren't enough to warrant two tests yet again. 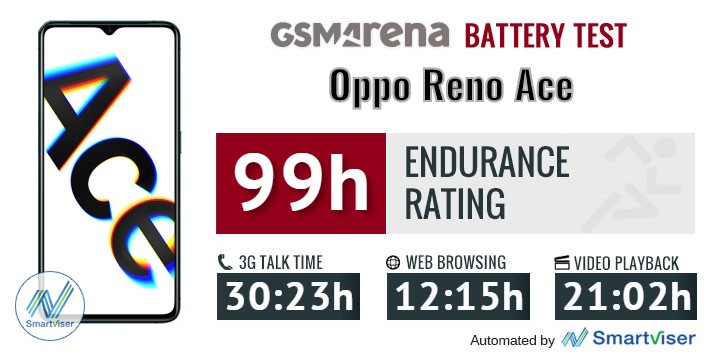 Our battery tests were automated thanks to SmartViser, using its viSer App. The endurance rating above denotes how long a single battery charge will last you if you use the Oppo Reno Ace for an hour each of telephony, web browsing, and video playback daily. We've established this usage pattern so that our battery results are comparable across devices in the most common day-to-day tasks. The battery testing procedure is described in detail in case you're interested in the nitty-gritty. You can check out our complete battery test table, where you can see how all of the smartphones we've tested will compare under your own typical use.

One of the best bits about the Oppo Reno Ace is its charging speed. The bundled 65-watt adapter got us to a full charge from flat in just 28 minutes. That's 2 minutes faster than what Oppo promise, and a 2-minute advantage over the 50W unit supplied with the Realme X2 Pro, which also over-delivered. Those 2 minutes are mostly meaningless, admittedly, but who's got the fastest charging? The Reno Ace does. 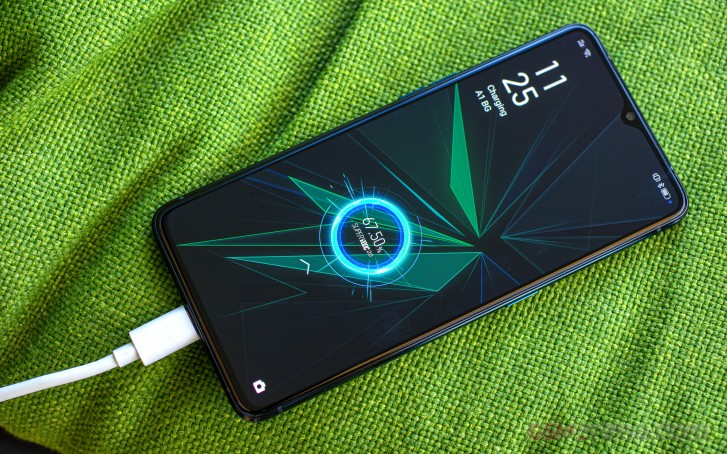 As for heat, the phone does warm up in the process, and the battery temperature goes as high as around 39C degrees. This isn't a low temperature by any means, but it's cooler than the levels the phone would get to under heavy load - like continuous gaming for example, when it goes past 46C degrees.

The Oppo Reno Ace has a stereo speaker configuration - a rather common one where there's a main, more powerful primary speaker ported on the bottom with the earpiece acting as the other channel in the stereo pair. The bottom one handles the low end of the spectrum for both channels, while each end gets the respective mids and highs. When the phone's in portrait, the earpiece defaults to the left channel, but it switches to match the landscape orientation you're holding the device in. 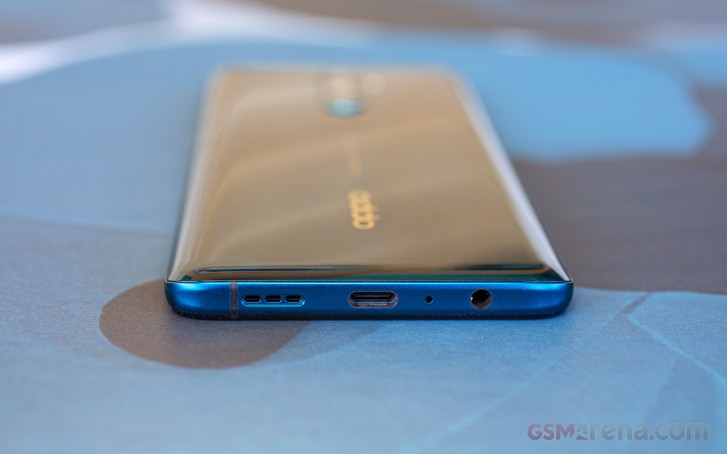 The Reno Ace is among the louder devices we've tested, easily placing in the 'Excellent' category in our three-pronged test. It sounds clean at full volume and has nicely balanced output across the frequency range - overall, a great showing.

Headphones took their toll on stereo separation and added some intermodulation distortion, plus they dropped the volume to below average. Not a bad performance overall, but certainly not one worth writing home about.

It will not launch in India

Hey guys.This phone comes with ads like the xiaomi phones or not?

what is the launched of oppo reno ace launch in India? please