Google is pushing the Pixel phones much harder than it did any Nexus before it. According to data by Appboy, it’s working.

The Pixel XL took a week to reach a market share comparable to the Nexus 6P two weeks after launch. And this is with some stock shortages at both Google and Verizon stores.

The smaller Pixel is showing some amazing growth too. A week after launch day, its numbers were 274% up. Similarly, the Pixel XL more than doubled its launch day numbers after a week of sales (up 158%).

Compare that to the established Galaxy brand - the S7 doubled its numbers a week later, growing slower than its predecessor, the Galaxy S6, which grew 171% in a week. 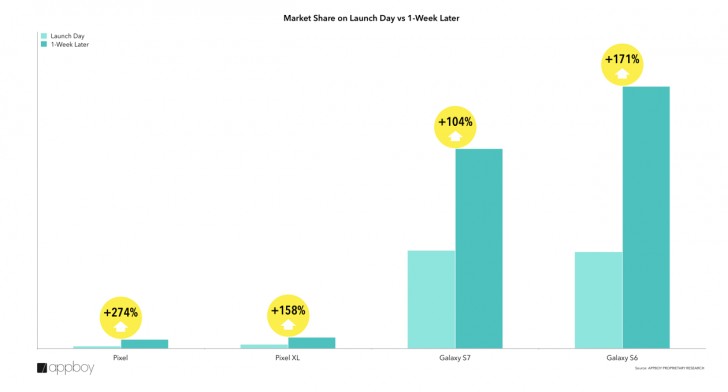 Of course, the chart makes it clear that while the Pixels are winning in terms of relative numbers, the absolute number of Galaxy S phones sold in the first week far outweighs the Pixels. Still, not a bad showing for a new brand and it’s clearly going better than the last round of Nexus phones.

But not the best battery life, not even close in fact.