The Poco F3 looks a lot like the Mi 11 - Xiaomi's current flagship - and that's great. The new F3 has two Gorilla Glass 5 panels on both sides, while the plastic frame, curved and glossy, is shaped after the one on the Mi 11. 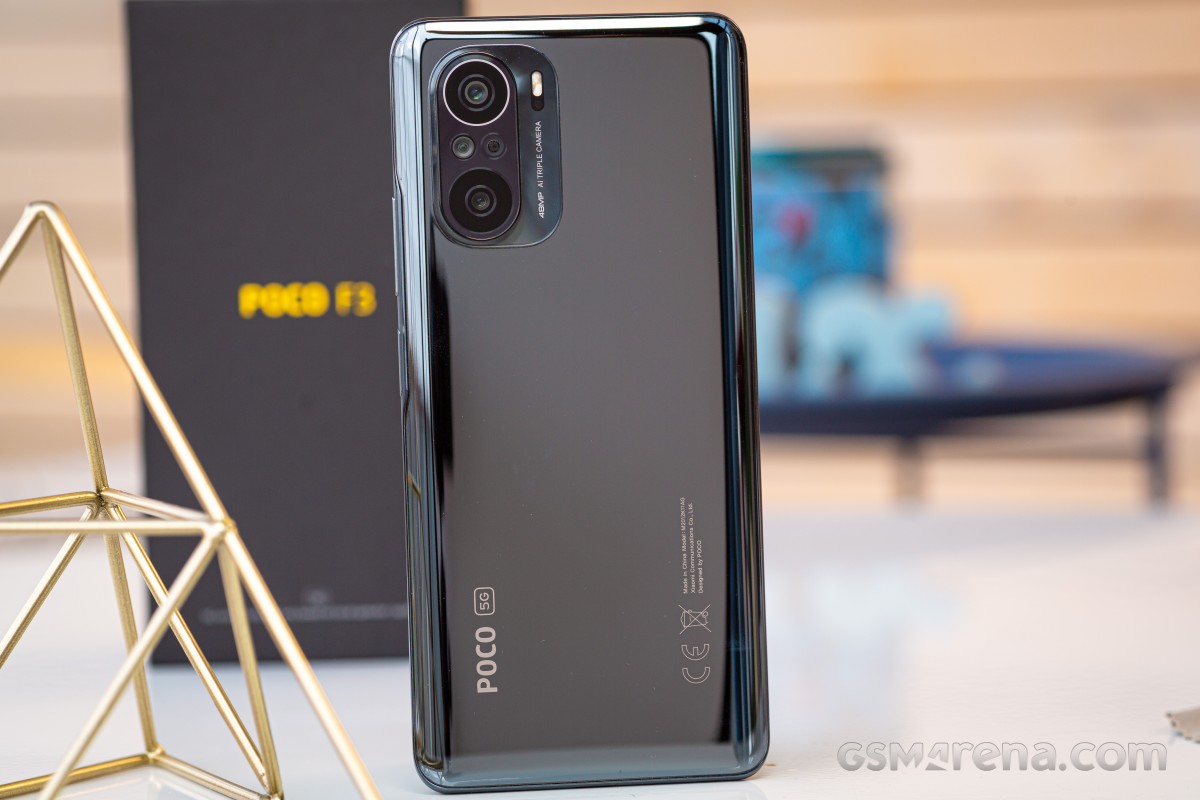 The camera setup on the back also takes after the Mi 11's, and that's good - the design is somewhat different from what we've used to see lately, and it allows all recent Xiaomi phones to stand out.

There is no mention of IP53 rating or water-repellent coating with the F3 - like it was the case with the Poco X3 and X3 Pro. Maybe the F3 omits one, maybe Xiaomi needs more time to confirm it. We can say two things for sure - the Poco F3 has fewer ports than the X3 Pro - hence fewer potential water entries - and it seems the F3 has similar SIM and USB port insulations as the ones on the Poco X3 Pro. Long story short - we do believe the F3 is protected against splashes, but for some reason, the maker isn't advertising it as such. 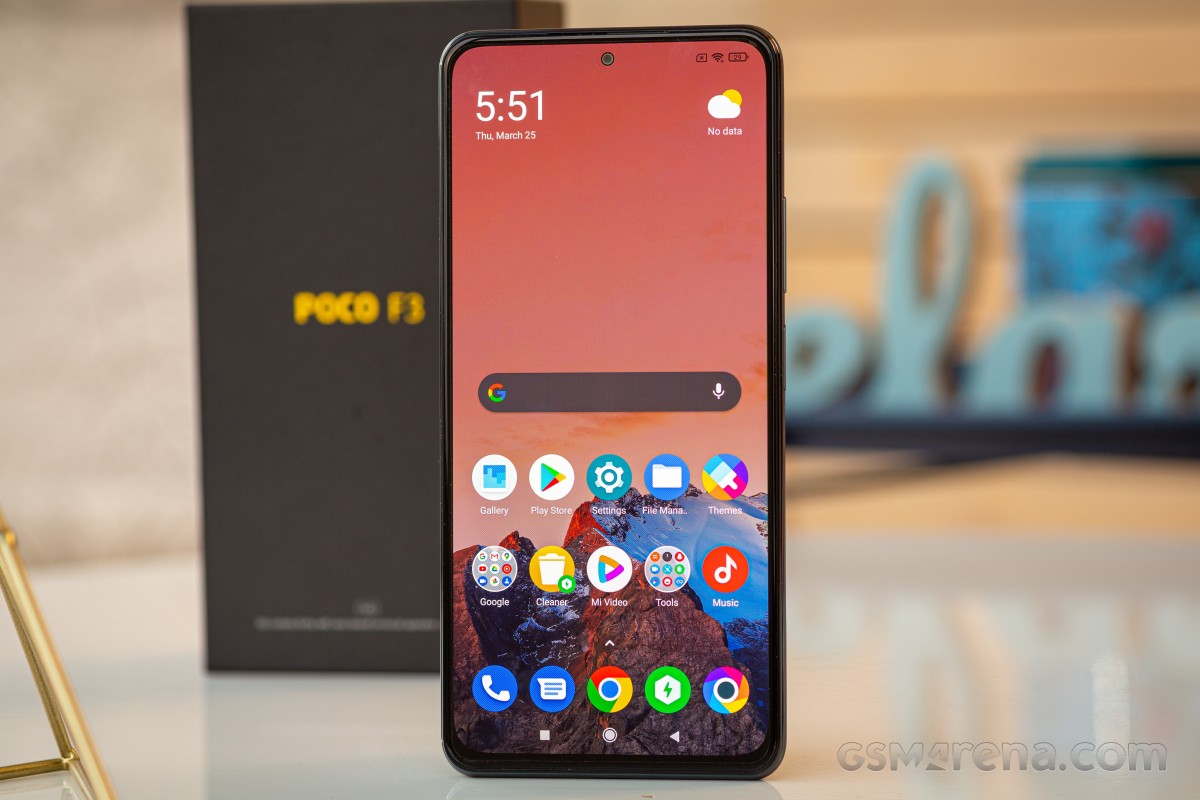 Anyway, we don't really expect a €300 or so phone to be water-resistant, but since many of its Xiaomi-made peers are IP53-rated, we decided to dig a little bit into the subject.

The Poco F3 is available in three different colors - Arctic White, Night Black (ours), and Deep Ocean Blue. The black and white hues are all-glossy and mirror-like, but there are no gradients or weird reflections. This super glossiness eventually turns into a smudge fest and if that's not your cup of tea, maybe you should consider the blue version - it divides the back into three different zones, each with its own finish.

We like our black version; it somehow reminds us of ceramic, but as we said - it gets smudged up in mere minutes, and the occasional wiping is a must.

Let's take a step back from the design and look at the front. Most of it is taken by the 6.67-inch AMOLED screen of 1080p resolution and 120Hz refresh rate. It's a nice upgrade over the Poco F2 and probably a similar panel to what we saw on the Redmi Note 10 Pro.

The screen bezels seem reasonably thin, as is the punch-hole - one of the tiniest we've seen. The selfie camera is properly centered inside the cutout, something that was an issue on the Redmi Note 10 Pro. 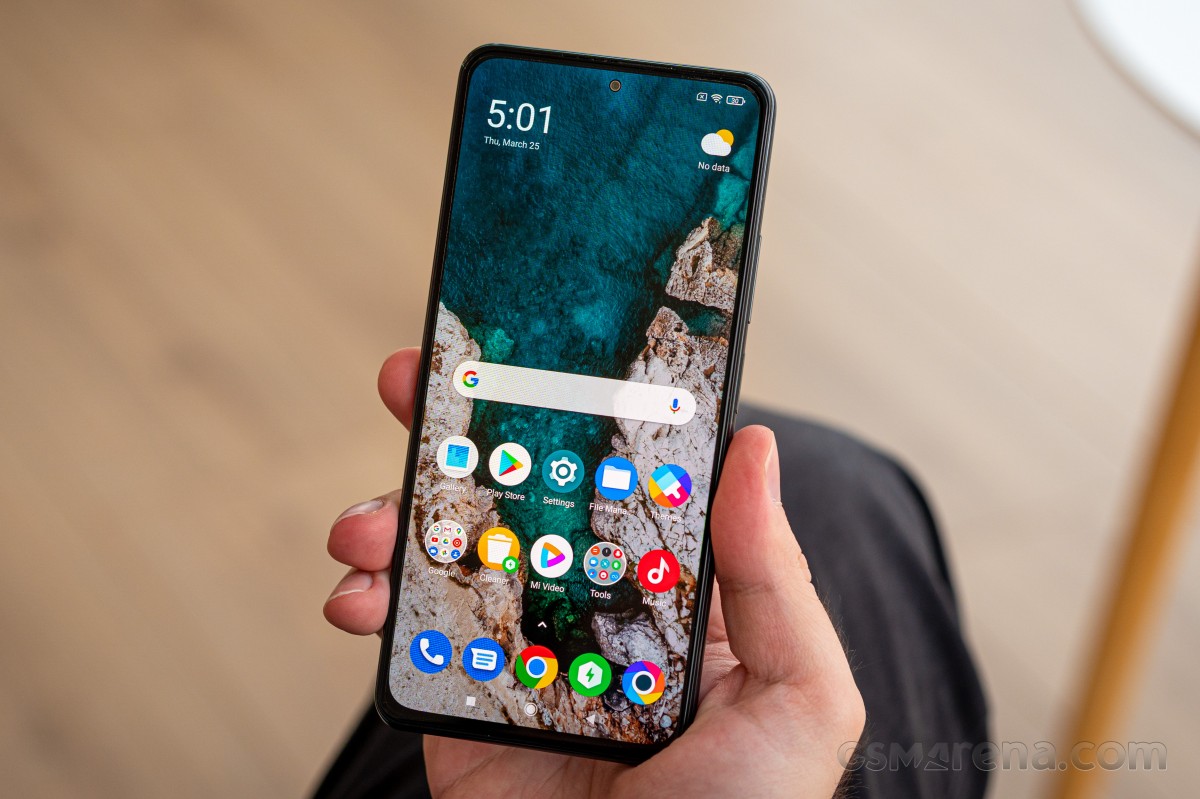 There is no under-screen fingerprint - it's placed on the frame instead. But under the thin grille above the screen is one of the stereo speakers, and it's nicely loud and clean. It also doubles as an earpiece, of course. 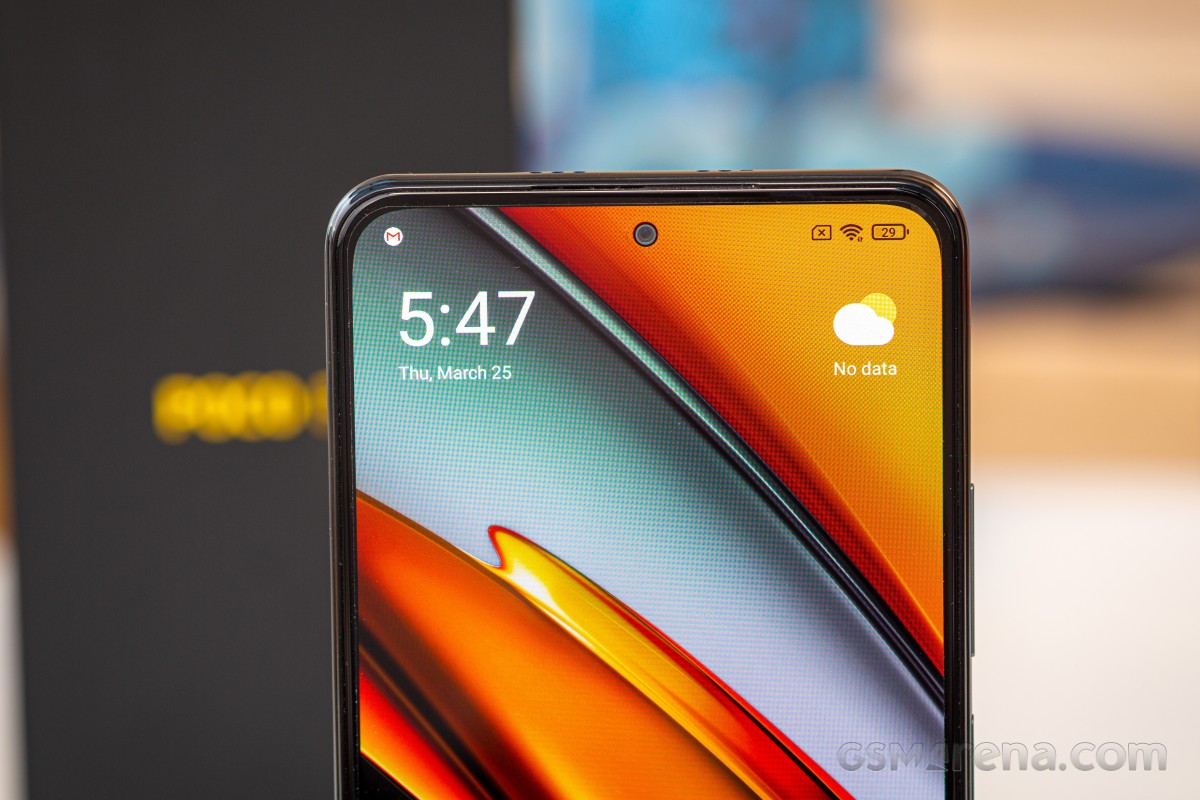 There is no notification LED on the Poco F3, but you can opt for screen breathing lights even if you've disabled Always-on screen, which is a good enough alternative.

The glossy back of the Poco F3 looks magnificent when it's clean. It contains the two-step camera setup - the first floor contains the LED flash and the 360-degree ambient light sensor. The second glass is jutting out of the first and has the three snappers - 48MP main + 8MP wide + 5MP macro - and a microphone. Both glass pieces seem to be surrounded by thin metal bands. 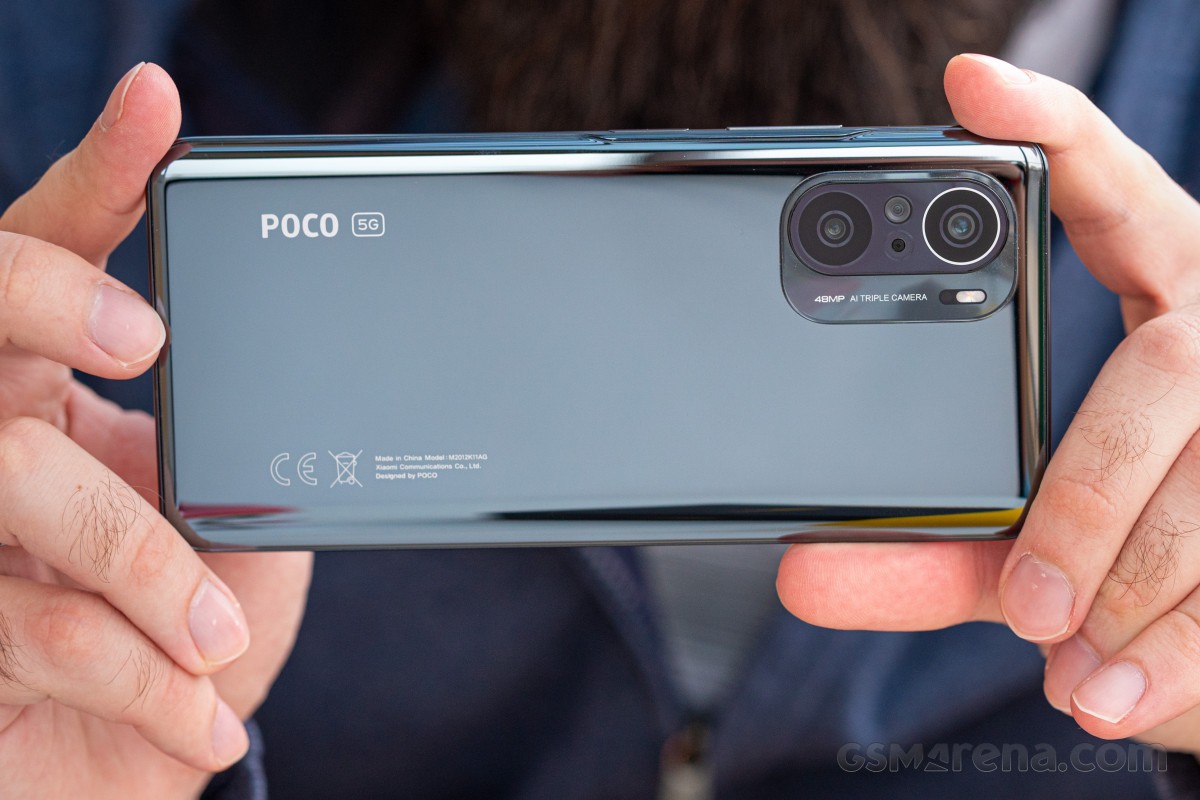 Now, let's take a close look at the sides of the Poco F3. The left side is bare, while on the right-hand side you can find the volume rocker and the power/lock key as usual. 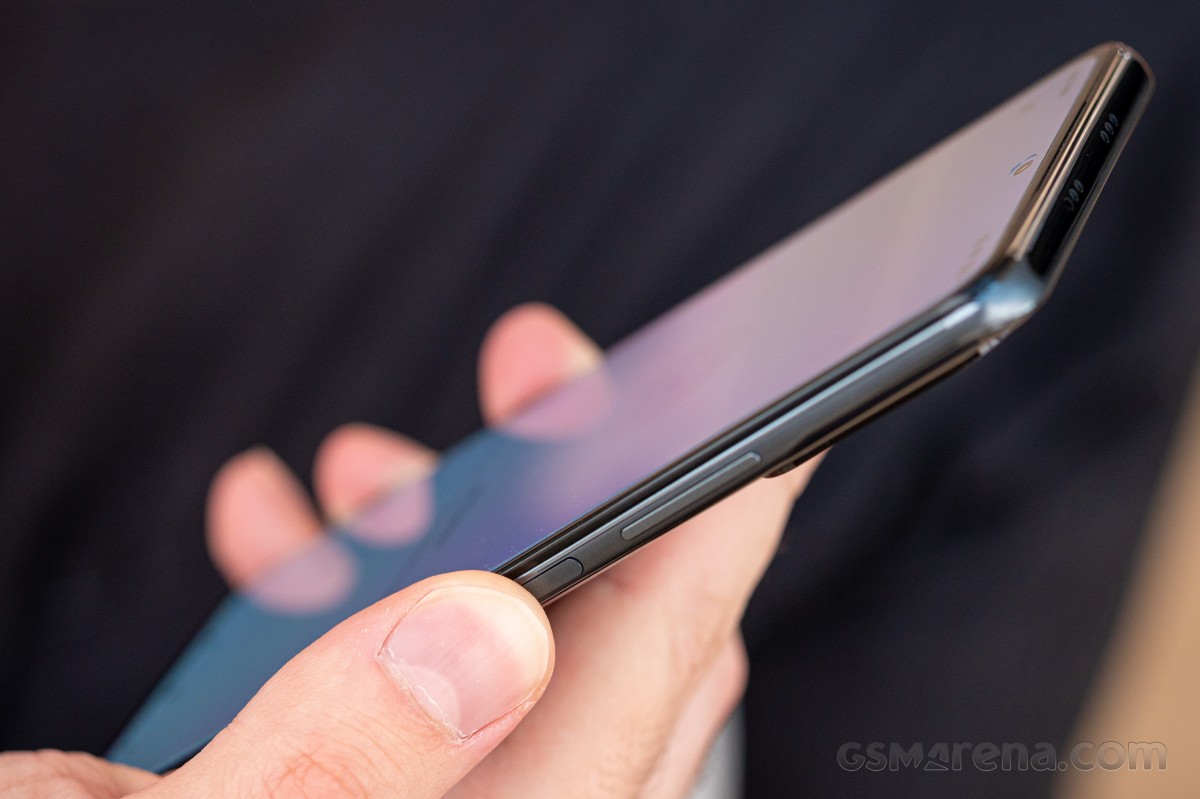 The power key's surface also doubles as an always-on and speedy fingerprint reader. It never failed us, and the speed and accuracy are just phenomenal. 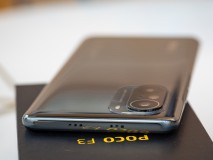 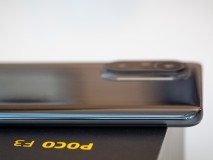 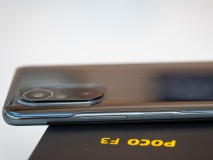 The sides of Poco F3

The top of the Poco F3 houses two grilles - the first one is for the top speaker, while the second one hides another microphone and the IR blaster. 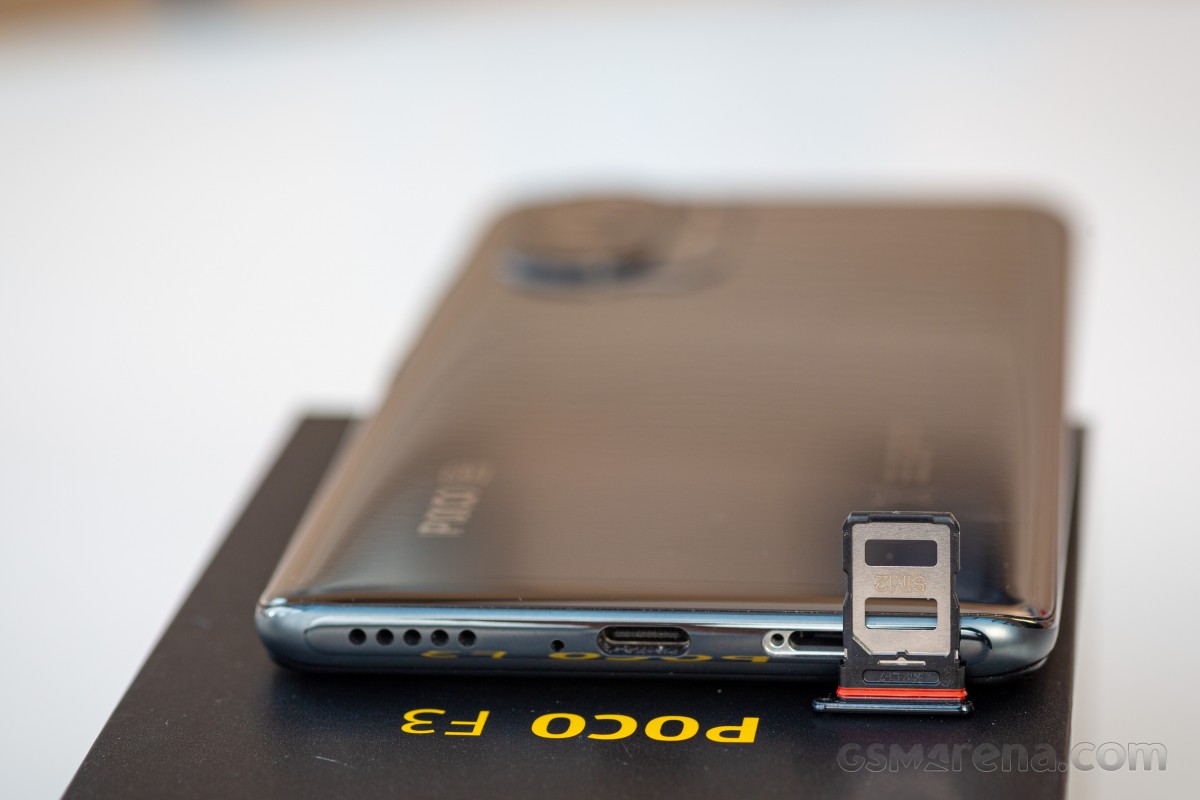 The other stereo speaker, the USB-C port, the dual-SIM tray, and the primary microphone (the mouthpiece) are all at the bottom.

The Poco F3 may have a glossy and curved back, as well as a curved frame, but it somehow ended up with a shape that provides an acceptable grip. The phone has a plastic frame, sprayed with some grippy paint. And it turns out that's enough for an overall pleasurable and safe handling experience. 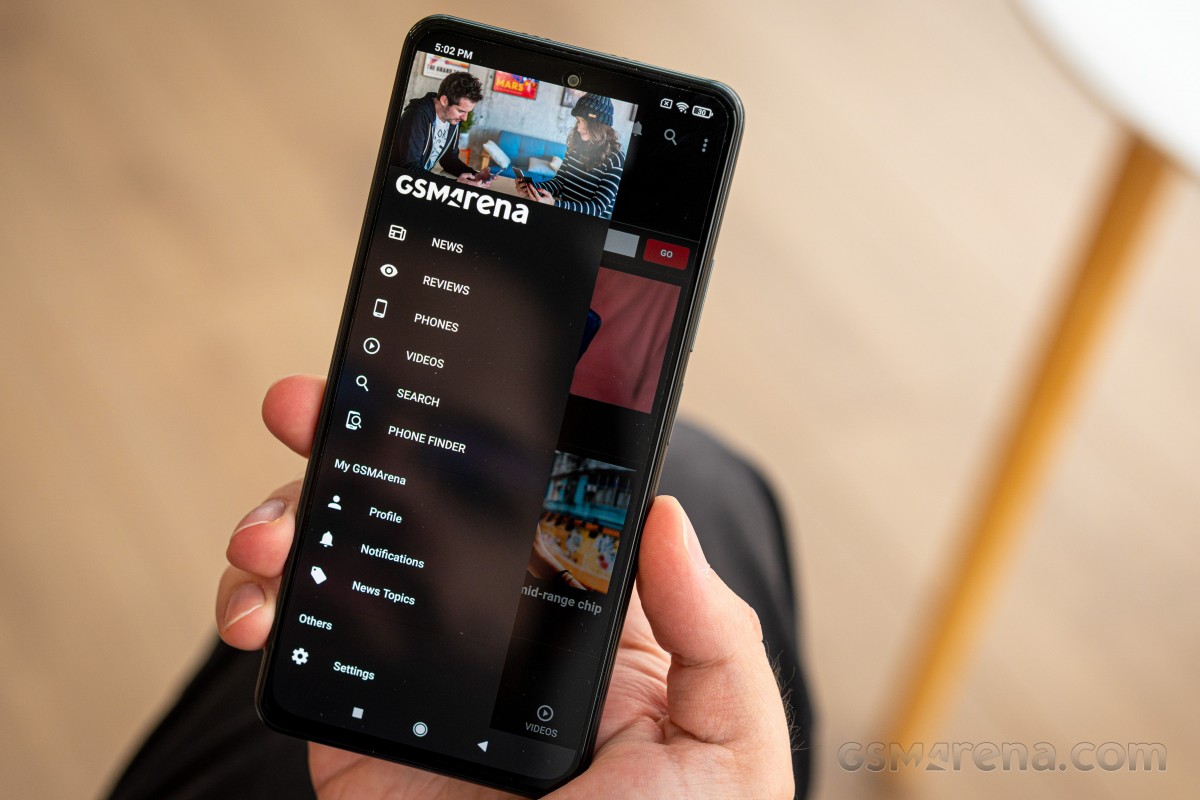 The Poco F3 is a good-looking phone with a premium build for this mid-range class, and we like how the phone has turned out. We would have loved it even better with an official IP53 rating, but if it meant a higher price, then maybe it was the right decision to skip it. After all, unlike Realme 8 Pro, Poco has put rubber gaskets everywhere it matters.

Yeah pretty insane deal! Nothing else even comes close for the price.

From Xiaomi official store during their festival sales event in early April, wanted the white but it sold out within the morning on the first day. :( You can see the proof here: https://imgur.com/a/955Z2nC