Amidst the Pocophone F1 light bleeding debacle, Poco India released a statement explaining how it will help solve the issue and what's causing it.

There's a number of users complaining about a backlight bleeding issue on their handsets. It also appears to be pretty widespread and hence the statement below. 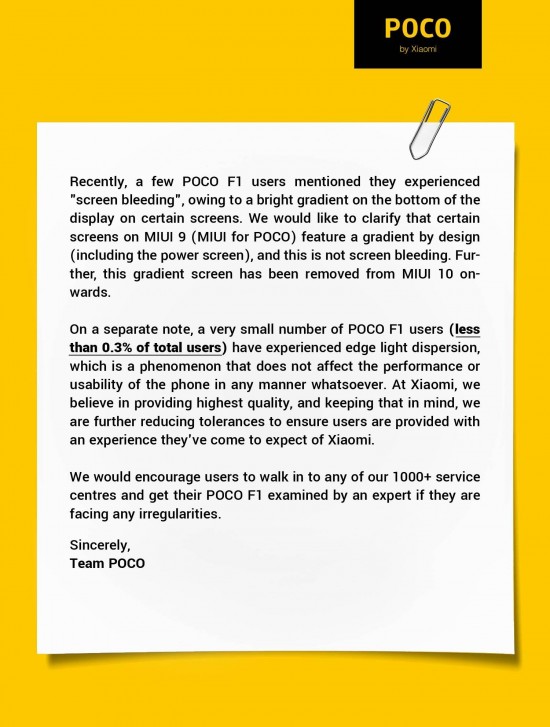 So according to the read above, just 0.3% of the units are affected by the light bleed and Poco India is encouraging its customers to visit their nearest service center. As for the rest of the handsets, Poco claims it's a software issue - a gradient color that may look like uneven backlighting. The company promised to remove the gradient in the upcoming MIUI 10 update since people didn't like it.

Important update: At POCO, we always strive to bring the best for our customers.

Few of you sought clarification regarding edge light dispersion on your #POCOF1. Here is our statement on the same.

Yet a current Pocophone F1 user says he's been on the latest MIUI 10 Global Beta version for the phone and the so-called gradient is still present. It could either be that his is one of the affected units or that the issue has nothing to do with the software and all Poco is going to do is try and mask it.

Blaming a HARDWARE fault on the software? Seriously guys? I used the Miui 10 beta on my device that I eventually had to return for bleeding.. NOTHING CHANGED! MAN up a little and accept the blunder you made.. And this attempt of yours to convince us otherwise is rather lame..

Only time will tell and we'll make sure to keep you updated on how this develops.

Plastic can be durable - Pocophone F1 torture test confirms it

this problem can't be fixed via software update. DRM security encryption is hardware backed, so complete motherboard have to be replaced to fix that. Most chinese companies use low cost motherboards that include lower security of DRM as well. ...

If it were software related, they'd have to push an update and it would be fixed. Instead they ask their customers to take their phone to one of their service centers. I'd say that's pretty self explanatory.

Many people here were ranting and complaining all the time, while in fact they didn't even have the chance to lay their hands on the unit.