If you've seen the Poco X3 NFC, then you already know everything about the X3 Pro - those are visually identical. The Poco X3 NFC was the one to break the mold and show the first original Poco design, and that's the one you'll get with its Pro upgrade, too. 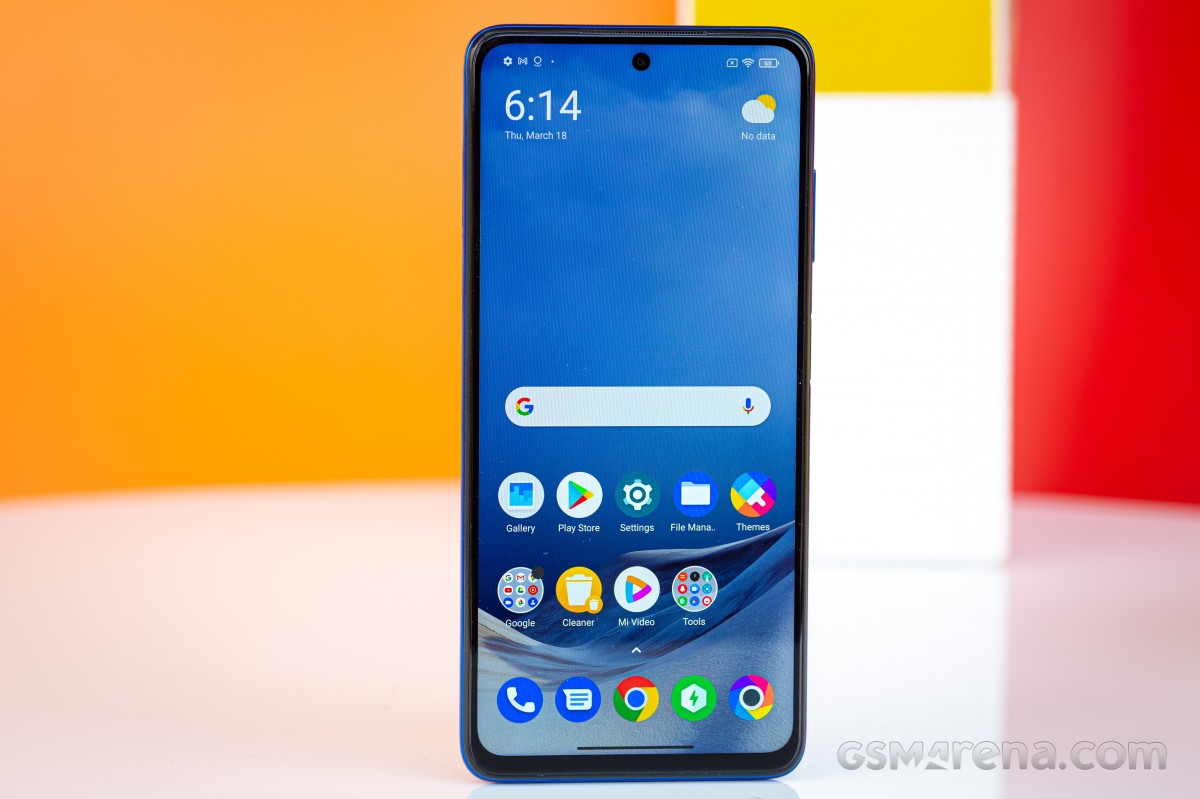 The phone's build is business as usual - a large Gorilla Glass is keeping the screen safe, the rear panel is made of plastic and beautifully painted, and the glossy frame seems to be plastic, too. The whole thing has an official IP53 rating for dust and splash resistance. Do not mistake this with waterproofing; the Poco X3 Pro will probably not withstand a submersion.

The back panel with the camera arrangement is what made the Poco X3 differ from the Redmi phones - it was the first uniquely designed hardware making the Pocophone instantly recognizable among its peers. Just look at it! The company opted for a somewhat flashy design, but it wanted it to be seen, and seen it shall be. The curved plastic has three distinct stripes - two matte and one glossy in-between. The shiny part is as wide as the camera setup and has this cool striped pattern, which in addition to housing the huge POCO logo, also reflects light in a cool way. The back is indeed unique, and while it can't be everyone's cup of tea, we believe some of the skeptics could grow to like it over a few weeks.

The camera setup is also peculiar - its island has the shape of a rectangle with curved sides. Then the whole thing sits within a dark gray circle - an odd, yet again likable accent. The setup is thick, and if the Poco X3 Pro is carried case-free, it will wobble on your desk or table.

Enough with the design, let's take a closer peek around the sides of the phone now.

The 6.67" IPS LCD screen is the most interesting thing at the front. It's one of those premium panels with 120Hz refresh rate, a small cutout and the usual 1080+ resolution. That's the same screen we've seen on the Poco X3 NFC. 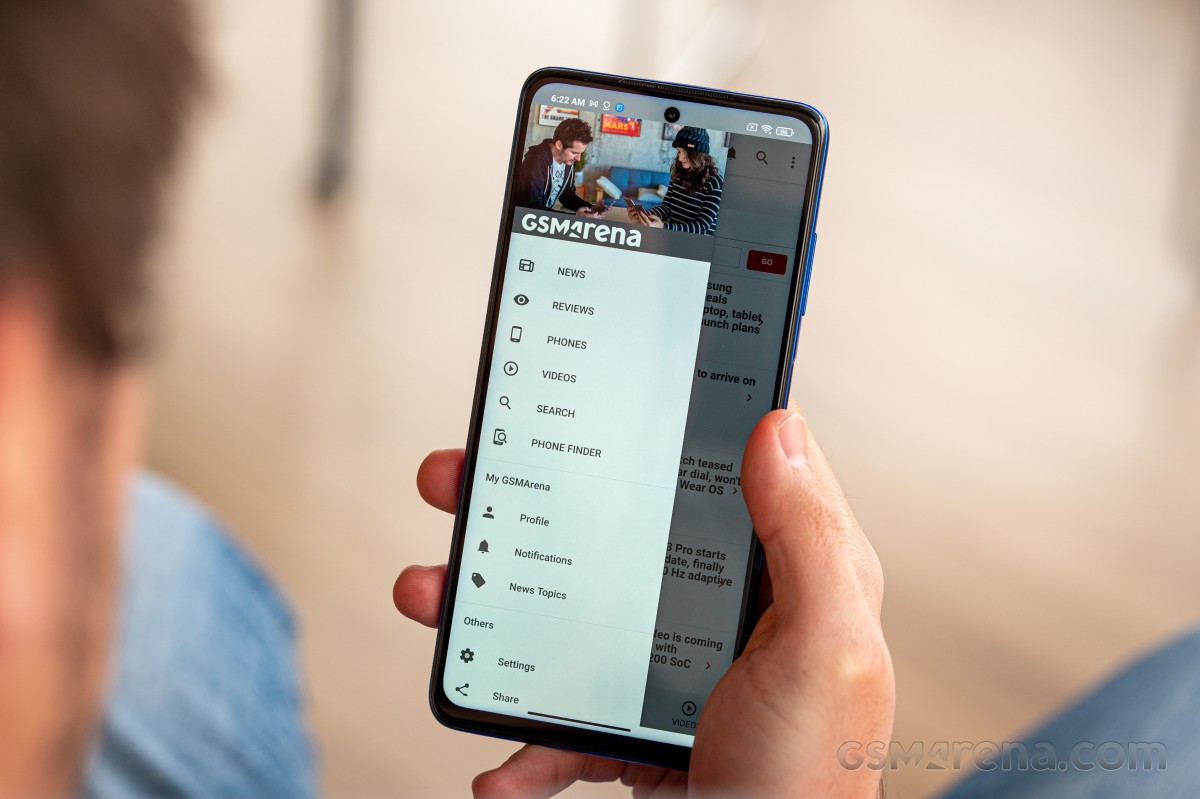 There is a flat Gorilla Glass 6 shielding the screen, which is one of the few upgrades over the Poco X3 NFC - the previous model relied on a Gorilla Glass 5 piece.

The bottom screen bezel is a bit larger than the rest, but we can't really hold it against the Poco X3 Pro, given its affordable pricing. Plus, above the screen, you'll find one thin grille hiding the earpiece/stereo speaker and a tiny white-only notification LED. The speaker seems to be as loud as the bottom one, which is nice. 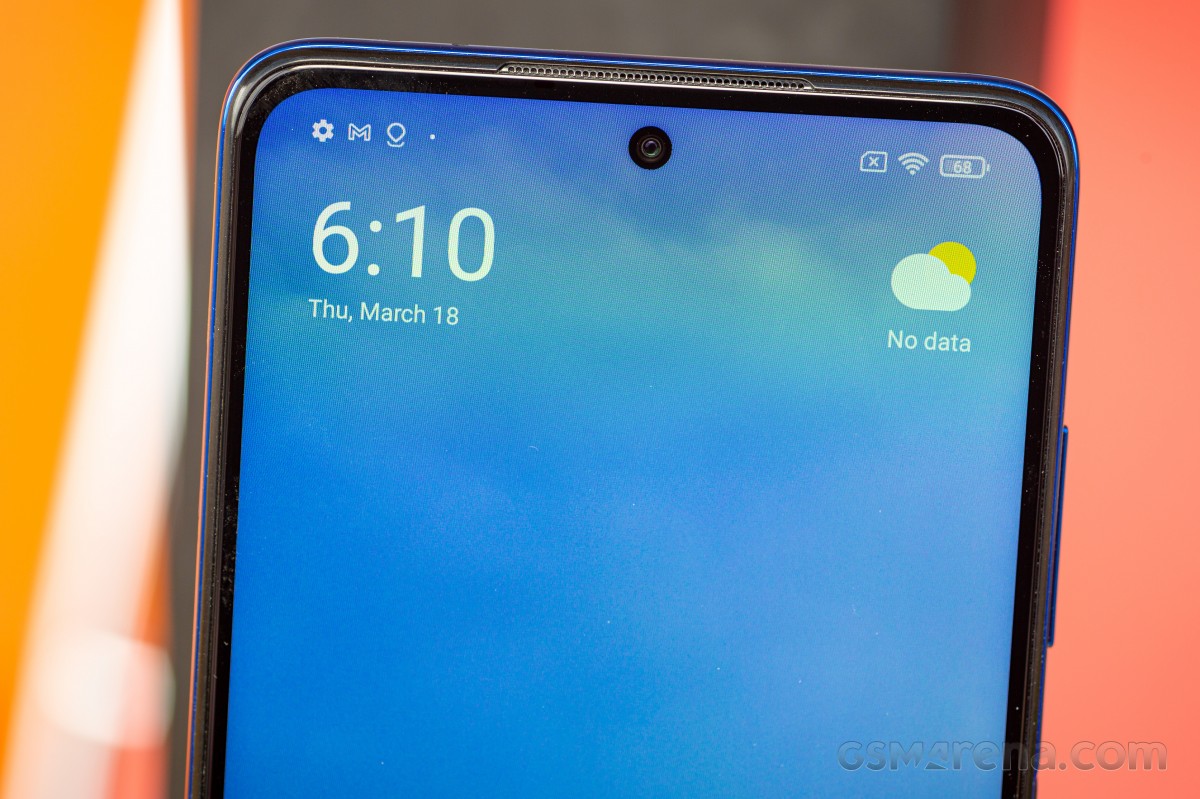 There is no in-screen fingerprint scanner as the panel is not an OLED but LCD. The Poco X3 Pro has its reader put on the right side, mounted on the power key's surface and ideally sitting underneath your thumb. This placement could be an issue for some, as you may get misreads while pulling the phone out of your pocket. We suggest changing the scanning trigger from Touch to Press in Settings, and all issues will be immediately resolved.

The right side also has the volume keys. The lone card tray is on the left, and it's of the hybrid kind - you can replace one of the SIMs with a microSD card. 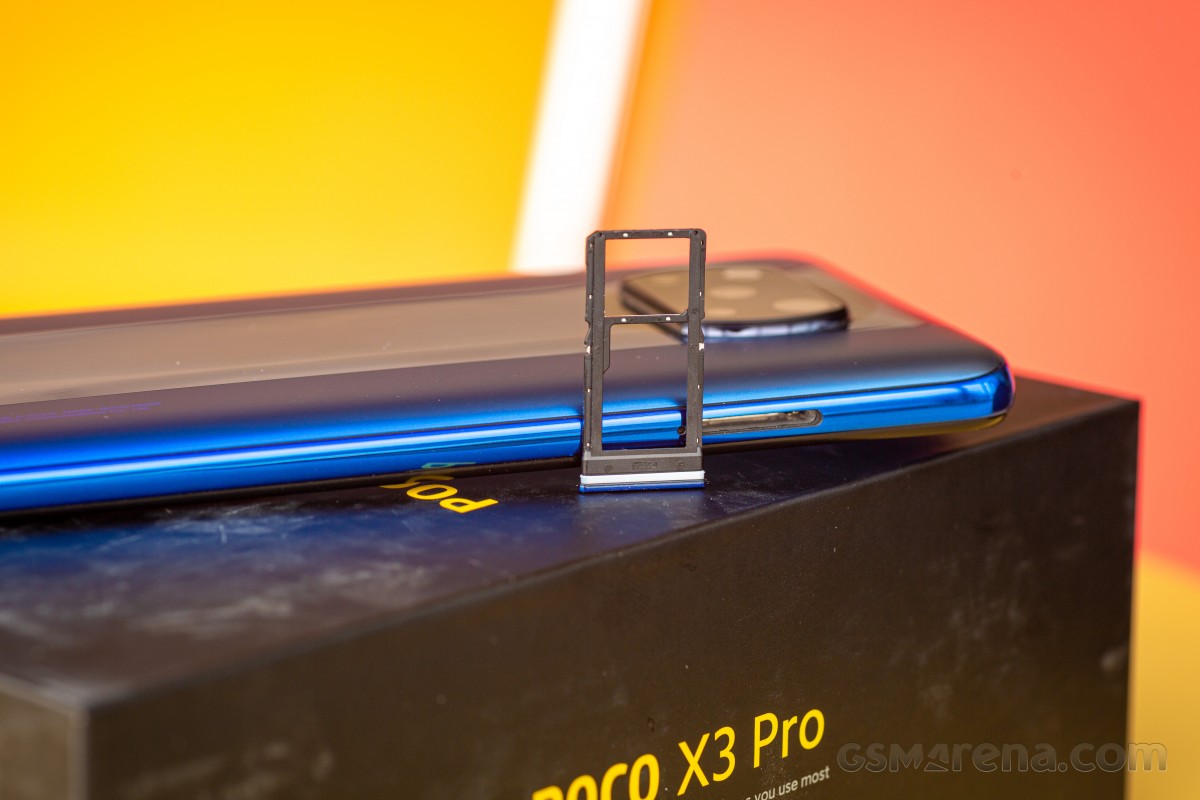 The top of the Poco X3 Pro has the IR blaster, one of the mics, and an additional hole for the top speaker. This way, you get louder sound with better quality.

Finally, the bottom packs the 3.5mm jack, the USB-C port, the mouthpiece, and the second stereo speaker.

The sides of the Poco X3 Pro

We've already mentioned the unique back and its camera setup. The sensor logic there is the same as on the Poco X3 NFC, but the two important cameras feature lower-res sensors now. The primary snapper is a 48MP one instead of 64MP, the ultrawide uses an 8MP eye instead of 13MP, while the depth sensor and the macro cam are unchanged - they are both 2MP. A single LED flash sits in the fifth and final cutout. The X3 Pro isn't that elegant, nor is lightweight - the phone feels solid and well-built, with a good grip thanks to its plastic frame, even if it is glossy. Fingerprints and smudges are an issue for the frame and the back, so if you like to carry your phone without a case and care for its looks, we can see you cleaning it a couple of times every day. 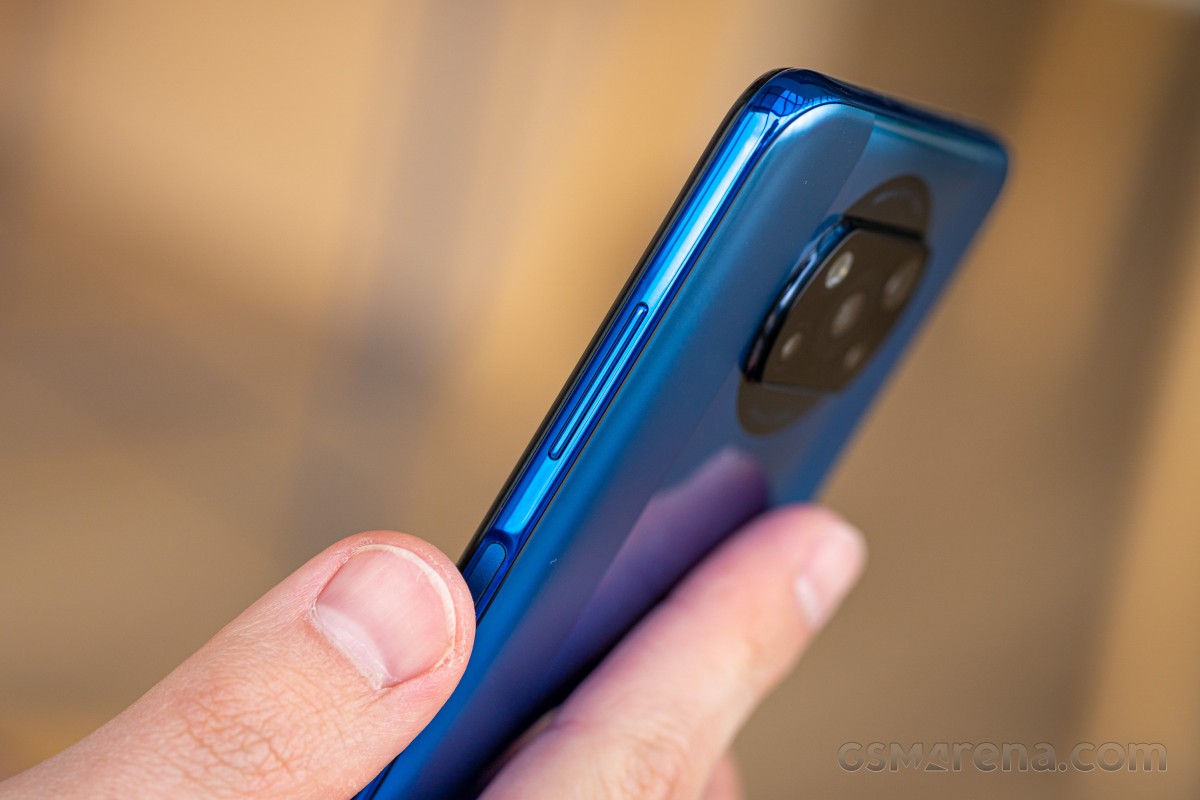 The Poco X3 Pro is a pretty phone, and we appreciate the added ingress protection. It fits well in hand and in most pockets, but as we said - it isn't the slimmest nor the most lightweight offer. But it can't have flagship specs and such a larger battery and be as thin as a sheet, can it?

My budget is the same as this Poco X3 Pro, so I'm planning to buy this phone soon, does it have any problems so far? Since I'm a gamer and really priority for the performance first and don't really care about the camera. Usually for se...

I’d want to buy resin, but since they were out of stock, pocox3 was next best thing