Poco has been going a little mad lately and the teaser for its next release is anything but straightforward. Instead, it focuses on what the brand does best – communication with the fans. Here's a letter for the Poco family.

The letter itself is interesting, talking about why no other phone has managed to reach the insane value-for-money levels of the Poco F1 – costs and taxes have gone up, so INR 21,000 phones can’t get flagship Snapdragon chips.

But note that bits of the text are in bold. If we’re reading this right, the Poco X3 Pro is coming on March 30. The phone recently bagged multiple certifications, so it’s not surprising that its launch is close at hand. 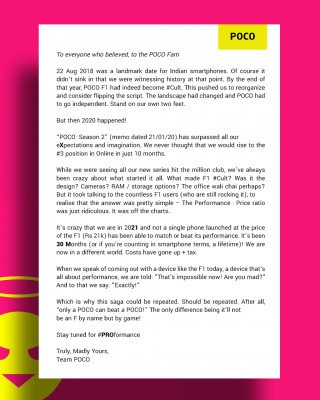 What will the phone be like? It’s difficult to say without entering a complex maze of conspiracy theories. We know that the Redmi K40 will be renamed Poco F3 for the global market, while in India it will be known as the Mi 11X instead (and the K40 Pro will be Mi 11X Pro). Will the Poco X3 Pro be a rebranded Xiaomi/Redmi phone?

Perhaps, but not one we’ve seen yet. Unofficial info claims that the phone will be powered by the Snapdragon 860 chipset, which Qualcomm has not quite unveiled yet. And that mention of the price may not be coincidental – Poco could deliver a INR 21,000 with a Snapdragon 800-series chip after all.

Additional rumored specs of the Poco X3 Pro include 6/128 GB and 8/256 GB memory configurations, a 120 Hz display and 5,200 mAh battery with fast charging. Note that this will be a 4G phone (based on the certifications it received), which implies that the Snapdragon 860 is a 4G chipset – a revamped 855, perhaps, similar to the Snapdragon 865/870.

Realme X7 Pro to have a Special Version with Snapdragon 860

Everyone: you want to revive the spirit of F1 no its not possible Poco: its necessary

Not for everyone though. Where I live 5g is a distant thing. 4g speeds are fine and a lot of people use primarily wifi. I can achieve 50mbps on 4g in a lot of areas I frequent. So if dispensing with 5g means a much better price, a lot of people will ...