While Sony has already published a list of devices that it says will be updated to Android Nougat, there has been no information on when the update will start arriving. That was, however, until now, as Sony Slovakia - during a presentation - has leaked the company's Nougat update roadmap. 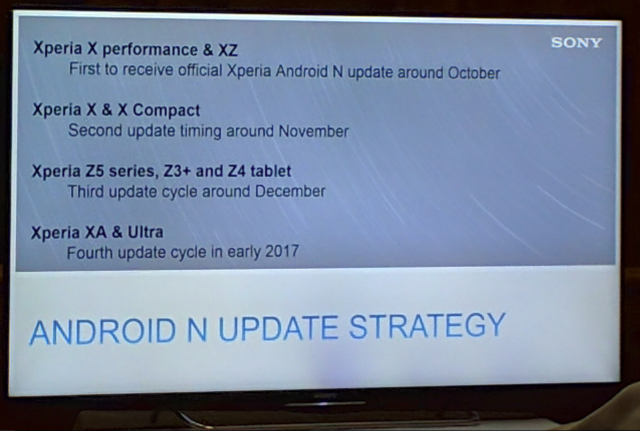 The slide in question reveals that the Sony Xperia X Performance and Xperia XZ will be the first two devices to receive the update, something which will happen "around October." They'll be followed by the Xperia X and X Compact that will get the update "around November."

Then December will see the Xperia Z5 series, the Xperia Z3+, and the Z4 tablet getting the update. And finally, the Xperia XA and XA Ultra will receive the update "in early 2017" time-frame.

why you still didnt tell me wich phones under 200$ are better then xz? maybe they dont exist?

why your comments with words like dumb are not deleted????? btw if im not wrong its not just problem with 32 and 64 bit,for exampe for s801 qualcomm dont want to make drivers i think? android n was avalibe for z3,but in beta program