The Snapdragon 865 may have stolen the show at Qualcomm's annual event that's currently going on in Hawaii, but the flagship chipset interestingly isn't the company's first to boast an integrated 5G modem. That honor goes to the also just announced Snapdragon 765.

This is the successor to the Snapdragon 730, and is Qualcomm's new premium level offering (that sits right under the 865 in its roster). The 765's Adreno 620 GPU has 20% better performance than the Adreno 618 in the 730, while the 765G sees a 38% improvement in graphics performance. 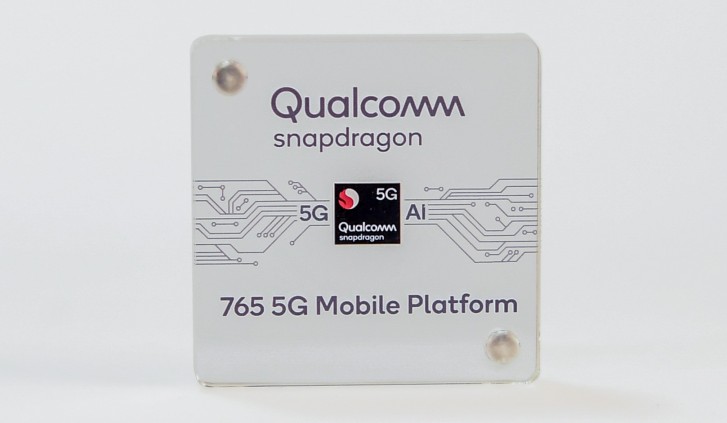 The CPU structure has been changed, although the 765 still uses Cortex-A76 performance cores (no move to A77 here, as in the 865). There still are two of these, but they're clocked differently. There's a Prime core that goes up to 2.3 GHz in the 765 and 2.4 GHz in the 765G, and another performance core that reaches 2.2 GHz on both bins (that's the same top frequency in the two performance cores of the 730). The six Cortex-A55 based efficiency cores still go to 1.8 GHz.

The integrated X52 modem enables theoretical maximum download speeds of 1.2Gbps on 4G, and 3.7Gbps on 5G, with uplinks going to 210Mbps and 1.6Gbps, respectively. It supports both sub-6 GHz and mmWave 5G networks.

The Snapdragon 765 is manufactured on Samsung's 7nm EUV process. The first devices powered by it will show up in the first quarter of next year, and this has the potential to unleash a barrage of more affordable 5G smartphones.

Mediatek is back in game with demensity 1000l. CPU and GPU is going toe to toe with SD 765G, even outperforming SD765G in GPU sometimes which is surprising given Adreno reputation

Integrated 5G with those specs and on 7nm EUV? Forget the 865, THIS is the chip to watch in 2020 IMO, as it could be the "powerful enough" battery life champion of this generation.