The Realme 10 is a pleasantly pocketable smartphone that weighs 179 g and has one eye-catchy design with a grippy shape. Realme has been known for its unique paint jobs, and the Rush Black and Clash White colors of the Realme 10 are quite interesting. 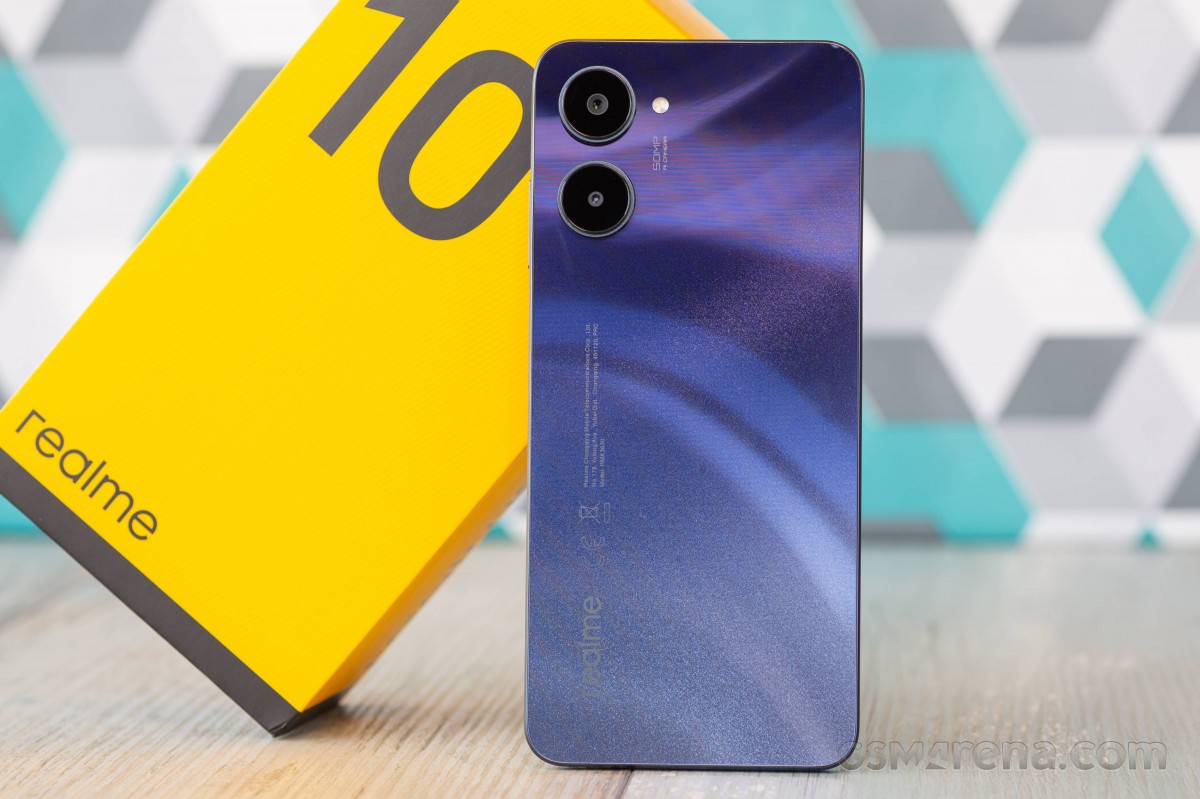 We have the Rush Black version, which is dark blue with a gradient toward black and sprinkled with thousands of glittering particles. While this combination does sound flashy, it is not; in fact, if you want a more mainstream and discrete color, this is the one to go for.

The Realme 10 has a flat Gorilla Glass 5 sheet on top of its display, a flat piece of multi-layered plastic on the back, and a flat frame with a matt finish. The frame also has these barely noticeable chamfers on both ends, which improve the overall grip. 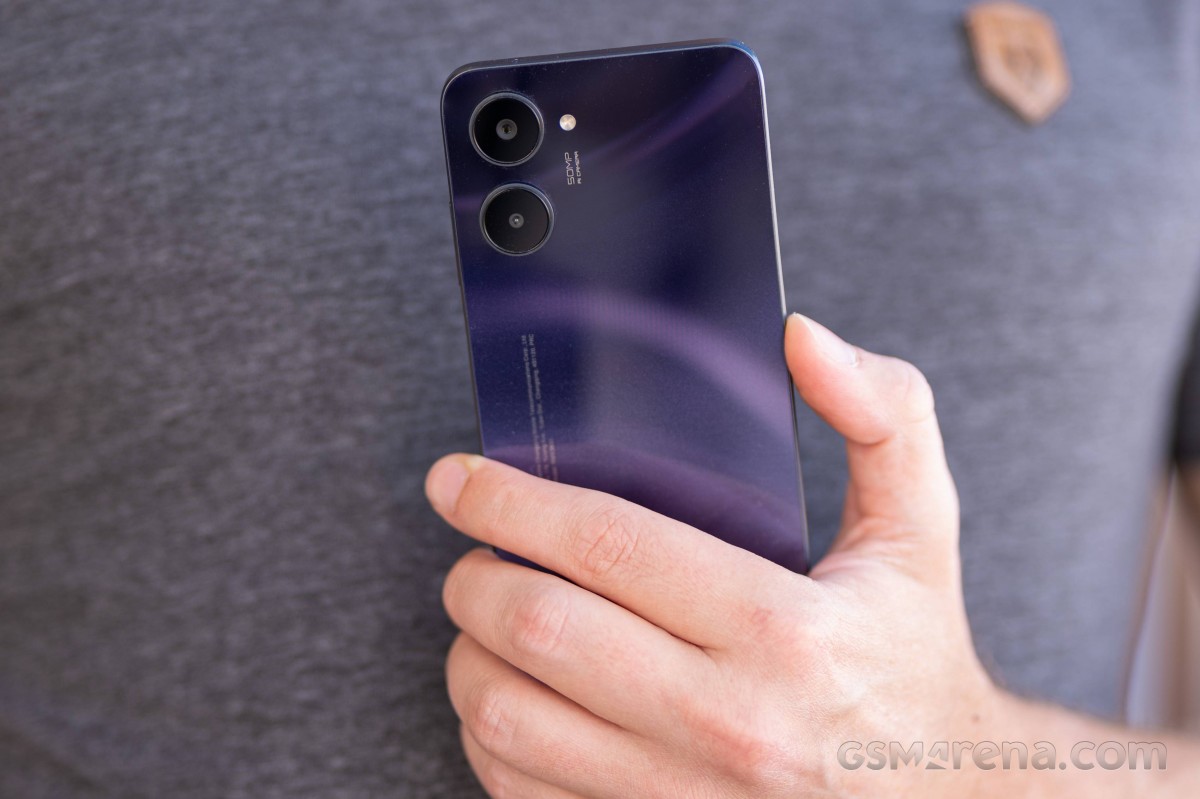 The Realme 10 has no official ingress protection rating, meaning it is completely naked to the elements as far as official specs and ratings are concerned. The phone seems to be sealed well and has some basic insulation around the slots, so we believe Realme has put some effort into moisture resistance, even if it didn't mention it specifically.

The 6.4-inch AMOLED occupies most of the front, and it looks bright and colorful. The panel supports a 90Hz refresh rate, 360Hz touch response, and DCI-P3 color gamut. There is a tiny perforation around its top left corner; there, you can spot the small 16MP sensor for the selfie camera. 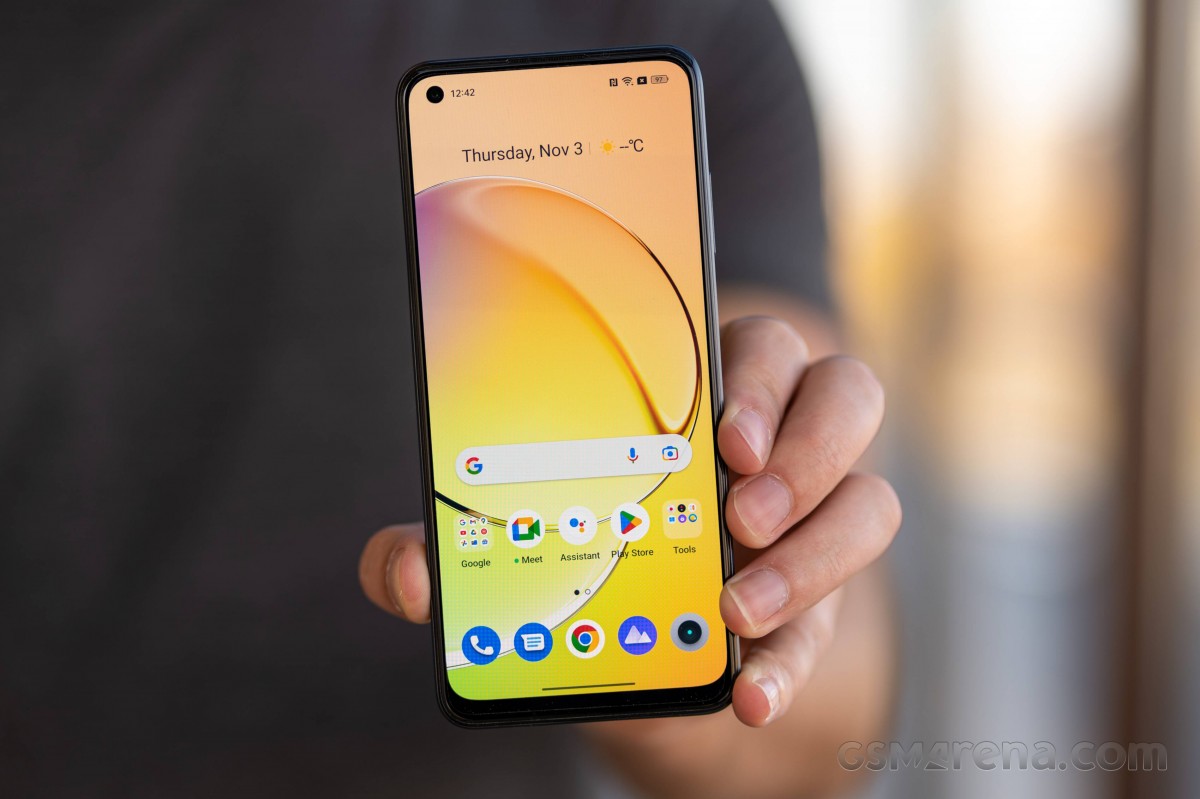 The earpiece grille is above the screen. 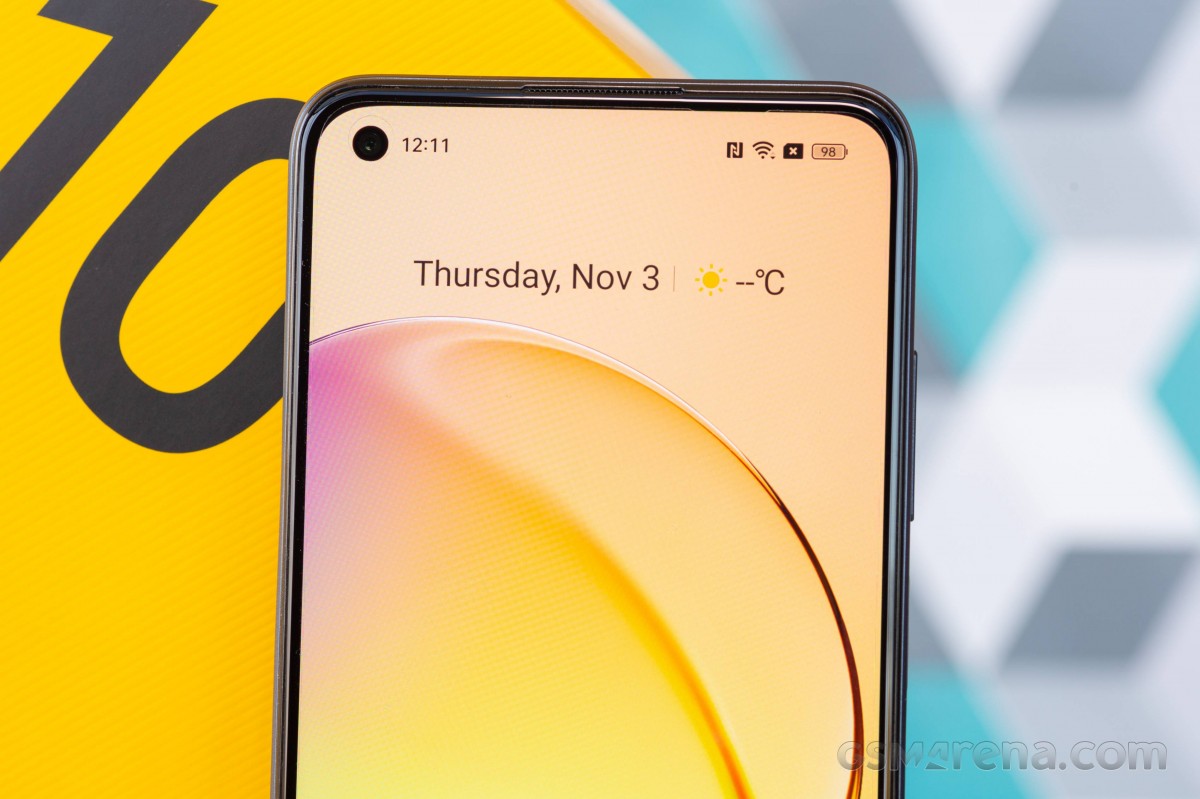 While the Realme 9 had an under-display fingerprint scanner, the Realme has now integrated the sensor into Realme 10's power button instead. While this is surely a cost-driven decision, there is nothing faster and more accurate than a conventional fingerprint reader, so this switch has its perks. 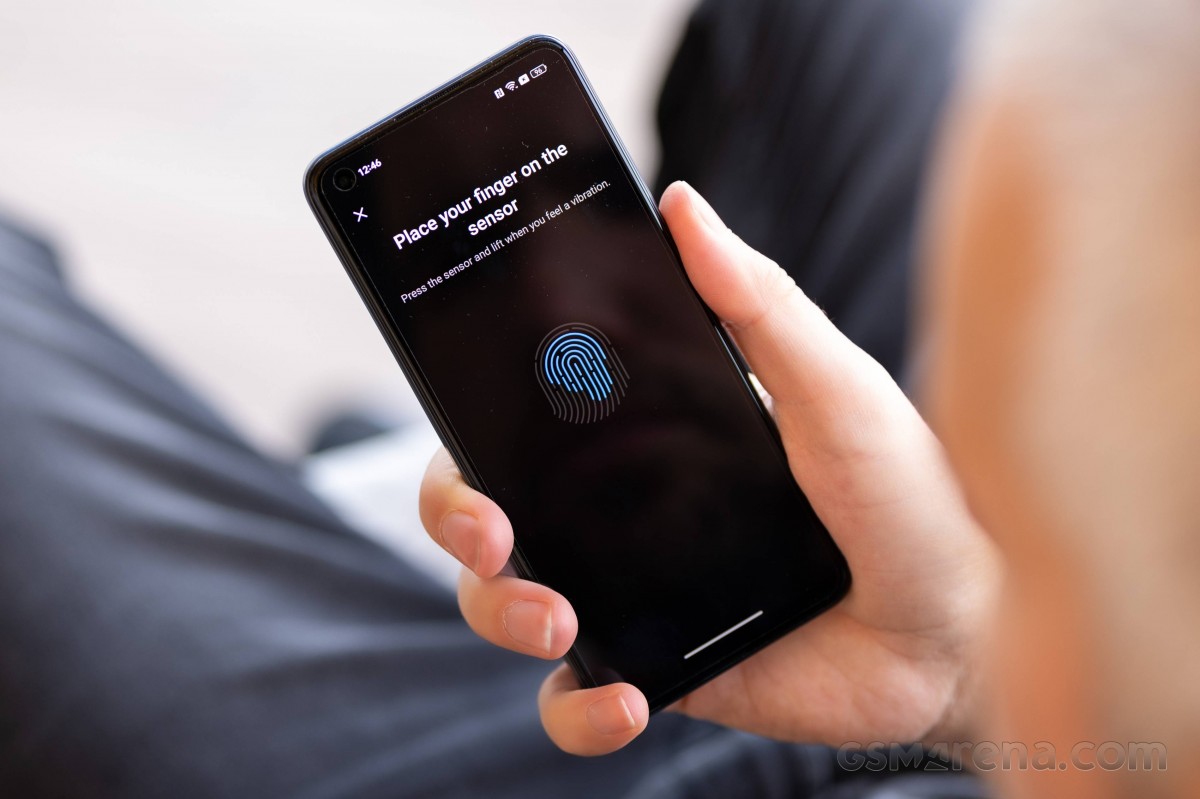 The screen bezels are rather thin across all sides except the chin. Still, since this is an affordable phone, we can cut it some slack.

The back is a real beauty, though. It has two cameras sitting inside plastic rings - the 50MP primary one and the 2MP monochrome depth sensor. The LED flash is also around. 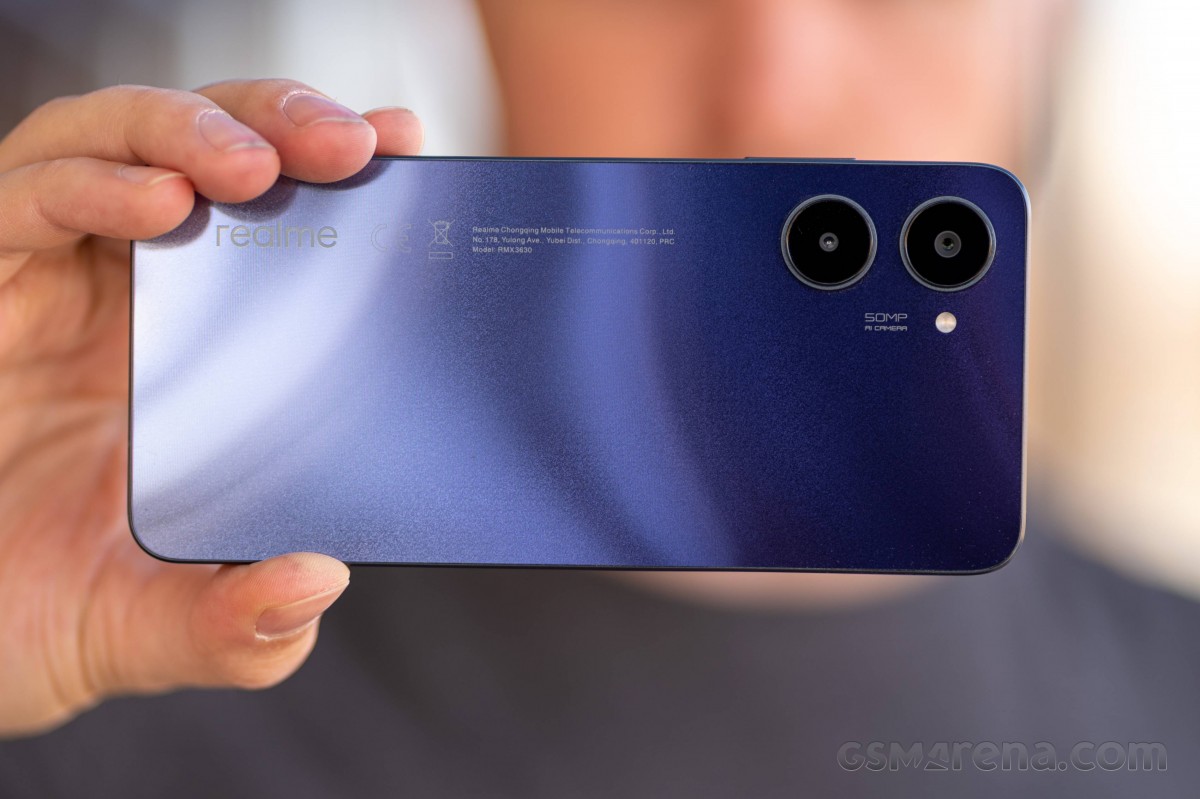 The Realme 10 wobbles when used naked on a desk because of the protruding cameras. If this bothers you, we suggest putting the protective case on, the one that ships with the phone.

While we understand that the 50MP needed more space, the second jutting-out ring is overkill for the secondary 2MP sensor.

The frame is grippy enough, and this helps the overall handling. It has one microphone at the top. 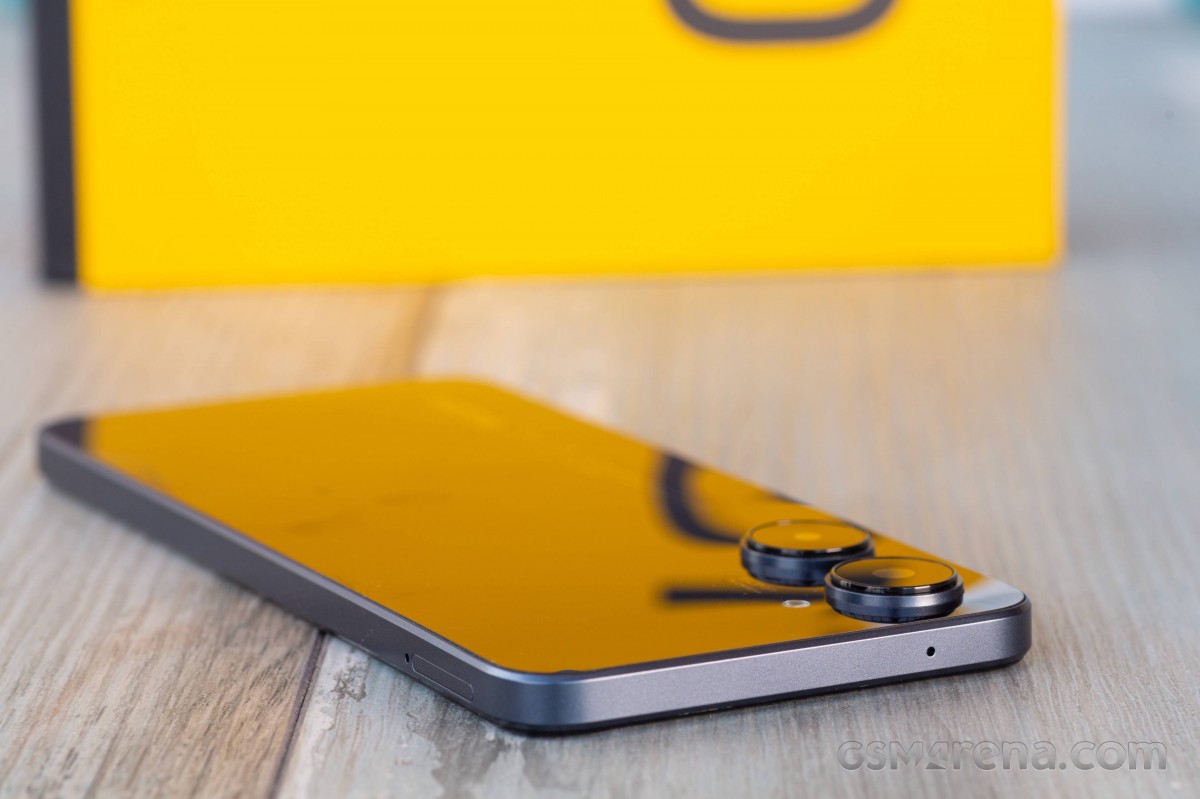 The primary mic is at the bottom, along with the speaker, the 3.5mm jack, and the USB-C port. 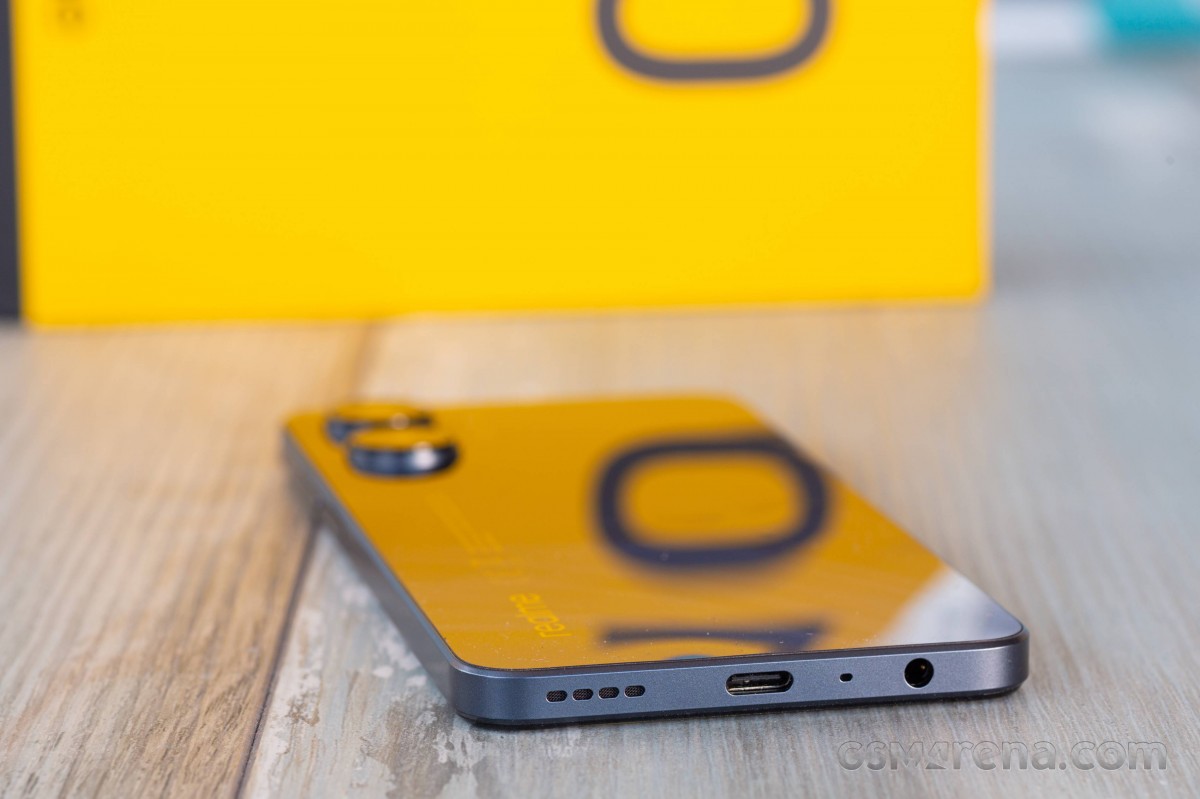 The tri-card slot is alone on the left, and it accommodates two nano-SIMs and a microSD card (up to 1TB). 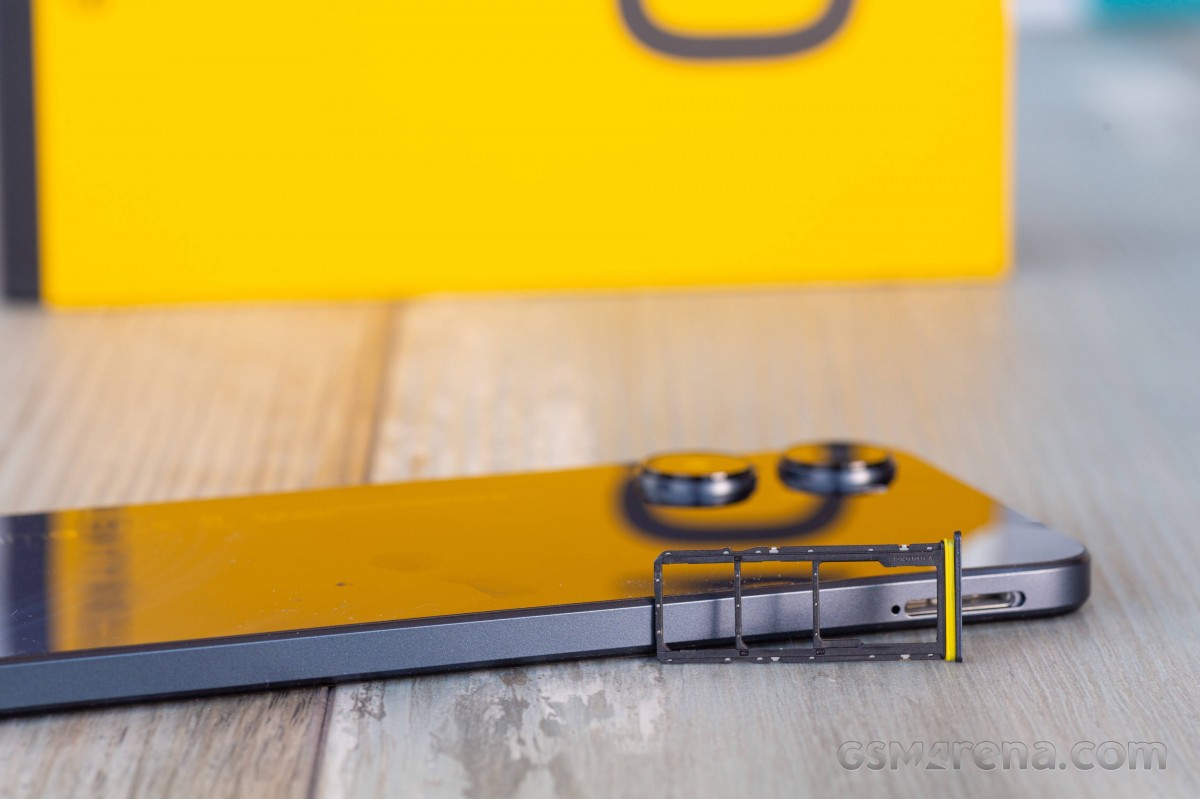 The volume and power/lock key are on the right. The surface of the lock key also has the always-on fingerprint scanner. 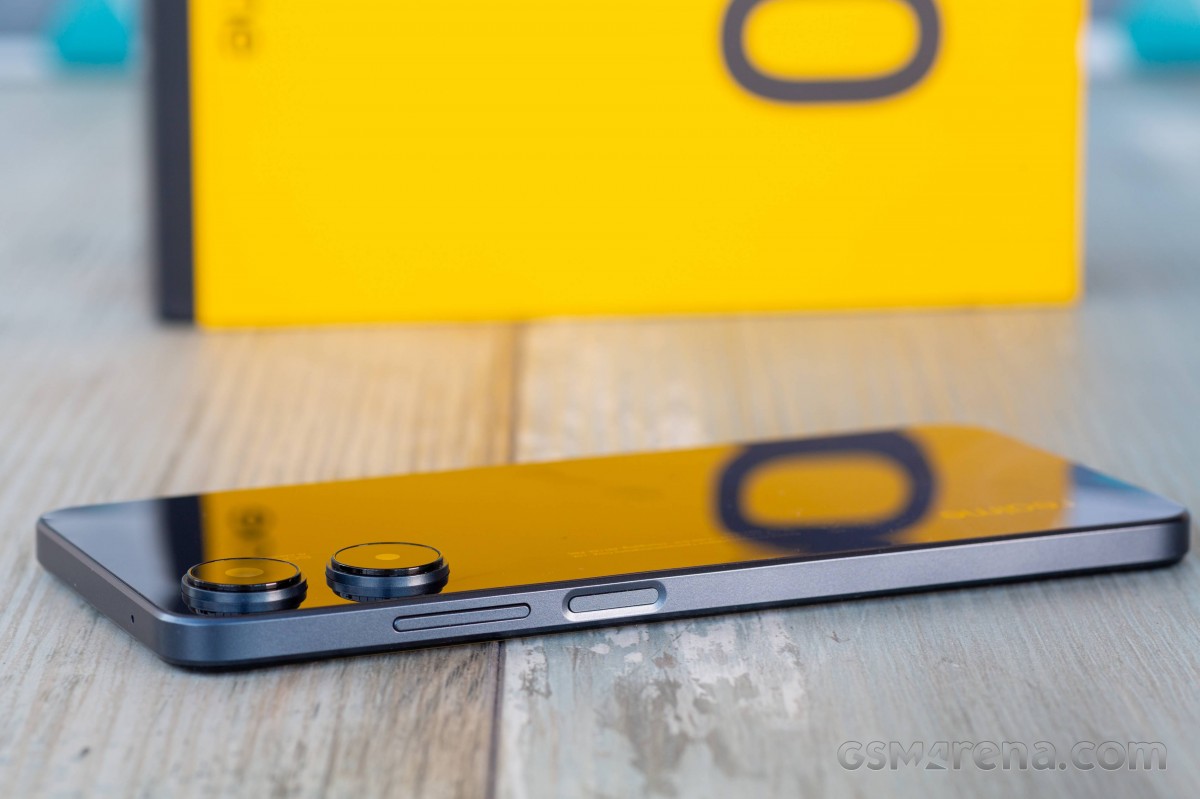 The Realme 10 is a good-looking phone with a solid build and a secure enough grip. Its size and weight are just right to be considered a pocket-friendly device - the 6.4-inchers have lately become a middle ground on the market - pocketable, not too bulky and yet with reasonably sized screens. 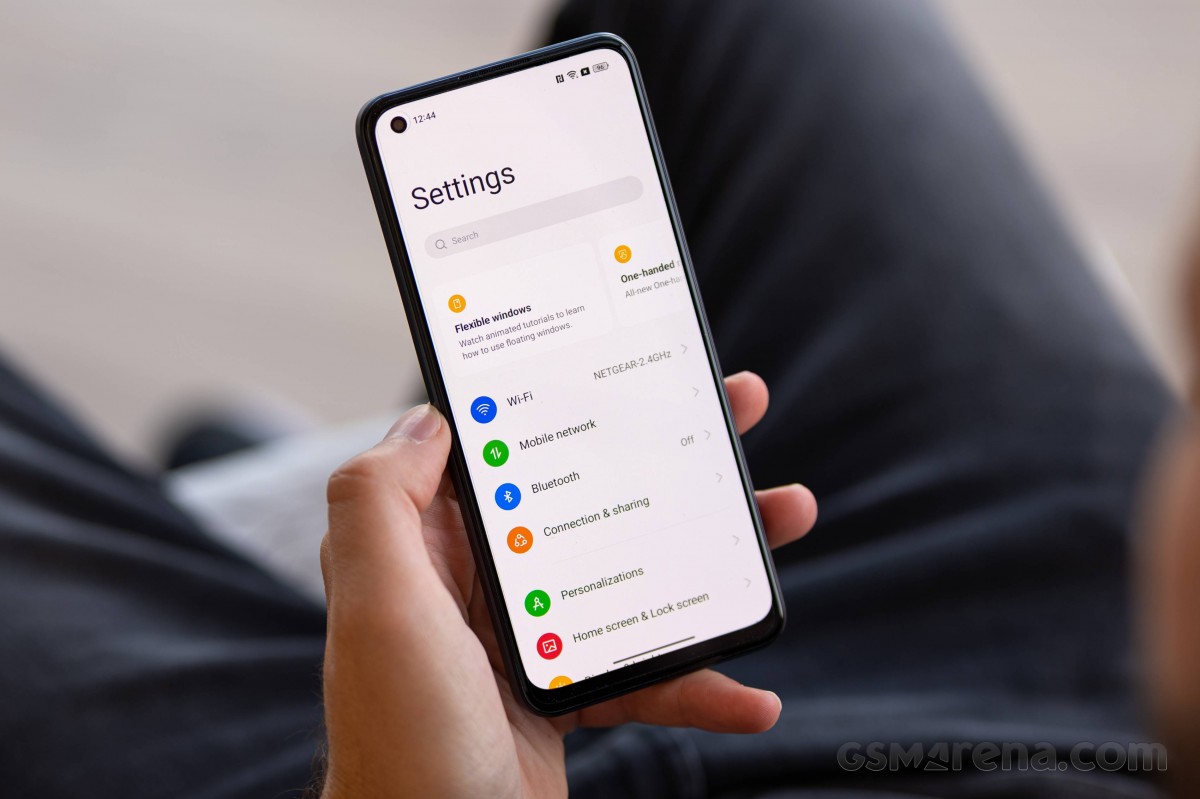 We like the design and build of the Realme 10, and we feel the only place with room for improvement is the ingress protection - a basic splash resistance rating would have given the users some peace of mind.

What about the haptic feedback in the device?, Is it decent one and solid while writing or scrolling through the UI or they used an old one which is used in the entry level devices? Can anyone confirm?

Yes Realme phones nowadays is very disappointing in terms of the Camera Set up they've been offering to the Consumers. Im planning for an upgrade but after seeing this phones isn't worth upgrading right now. My Realme 5 that I bought 3yrs a...

When hype meets reality then it becomes Realme 10.