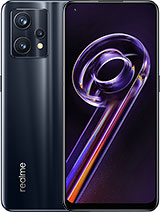 Xkira, 18 Jan 2022Why is realme downgrade the processor to 600 series from 70... more695 is a bit better than 720G. You can check here:
https://nanoreview.net/en/soc-compare/qualcomm-snapdragon-720g-vs-qualcomm-snapdragon-695
But in all fairness, they could have easily put a 778G

cah nglayab, 17 Jan 2022confuse if this a downgrade or upgrade. but seeing that sna... moreIt's an upgrade. Not by much though...

Realme really, REALLY loves their GT 2 series design. They're using it in all their phones for 2022 😂 which is actually bad for the flagship because it won't stand out anymore. No one is going to be able to tell if you're using the GT 2 Pro or the 9 series unless they get to feel the paper-back design of the flagship. That probably won't happen because we usually use back covers, and the one they provide with GT 2 series completely alters the phone's signature design.

They could have added a slightly curved screen like in last year's GT Master Explorer Edition, but nope.. flat screen on the GT 2 Pro. I guess we'll just have to let people know ourselves about which phone we're using

I like this one, big screen (Super AMOLED) and battery. microSDXC (dedicated slot) is a plus for me. 3.5mm jack

I hope will coming with Fast Charge 65watt or more 🤣🤣🤣

I will wait for this phone if it will come with a double camera in the front, real camera would be Sony sensor and screen display fingerprint.

Why is realme downgrade the processor to 600 series from 700 series..

jman0, 17 Jan 2022Unless they fix the problems with the proximity sensor in t... moreThey have addressed this issue and supposedly a different company makes the sensors now or something like that.

Norlanzt, 14 Jan 2022I'd buy this over Redmi Note 11 Pro anytimeUnless they fix the problems with the proximity sensor in the mid range phones, any Xiaomi, Redmi or poco phone in that range is pretty useless and fairly annoying, too. And you can't solve it by installing another rom, rooting or whatever. Xiaomi screwed it big time with that software-based proximity shit.

Again depends on region and preference...

Anonymous, 16 Jan 2022Considering A52s has a significantly higher price, I wouldn... moreHow dare you compare a super high tier midrange to these clearly just midrange phones?
These two doesn't even match against M52.

confuse if this a downgrade or upgrade. but seeing that snapdragon...