The Realme 9 Pro+ easily stands out with its photochromic design, fluid AMOLED screen, flagship-grade camera, and incredibly fast charging. Realme's specialty is offering powerful phones at bargain prices, and the Realme 9 Pro+ is indeed shaping as one of the best offers in the mid-range bracket right now.

The Realme 9 duo launches nearly one year after the Realme 8 series kicked off, and that's odd. The company had an established six-month release pattern up until now. Another different thing is the model naming - the Realme 9 Pro+ is a sequel to the Realme 8 Pro, while the 9 Pro seems to be taking a different spin on the Realme 8.

The timing and naming aside, the Realme 9 Pro+ seems like a worthy upgrade over the Realme 8 Pro, and it has enough to make quite a few people switch even before they read the reviews. The Realme 9 Pro+ is basically what the Realme 8 Pro should have been from the start - a proper continuation of the Realme 7 Pro with an HRR display, more powerful hardware, a better camera, and stereo speakers.

Indeed, the Realme 9 Pro+ now offers a 6.4-inch Super AMOLED screen with an extended 1080p resolution, 90Hz refresh rate and HDR10 support. It also comes with an improved 360Hz touch sampling rate. Then there is the Sunrise version that features a photochromic glass panel on the back, which shifts from blue to pink-orange when exposed to sunlight. Gaming performance is getting a major update with the MediaTek's Dimensity 920 5G chip. It has a more powerful processor and graphics than the dated Snapdragon 720G chipset used within the previous models and offers modern connectivity options like 5G and Wi-Fi 6. There were no promises for HRR gaming, though, so don't hold your breaths for that.

The rear camera gets an improved primary eye with a large 50MP Sony IMX766 sensor with an OIS lens. High-quality zoom, like the one on the Realme 8 Pro, should be possible, too. The 8MP ultrawide camera seems to be the same as on the previous phones, there is also a 2MP macro shooter. The depth sensor is gone, though.

The stereo speakers return on the Realme 9 Pro+ - one of the most notable omissions on the Realme 8 Pro. The fast charging is now 60W, up from 50W on the 8 Pro, while the battery stays the same - 4,500mAh.

Okay, enough with the teasing, here is the complete specs sheet.

Realme 9 Pro+ specs at a glance:

The Realme 9 Pro+ seems like a mighty sequel to the Realme 8 Pro, and we can't wait to put it through its paces. But before we do that, we want to mention the two apparent omissions on the Realme 9 Pro+. The first feature is the microSD slot, which was present on the previous models.

The other thing that's obviously missing on this Realme, as on the ones to come before it, is some sort of water protection, however basic. Most, if not all Xiaomi phones within the same price range are IP53-rated, and Realme should get up to speed sooner rather than later.

The Realme 9 Pro+ ships within Realme's signature yellow boxes with black labels. Inside, you will find a 65W SuperDart charger and a 6.5A-rated USB-C-to-A cable. You need to use both if you want to use the fastest possible charging, which is 60W in the case of the Realme 9 Pro+. 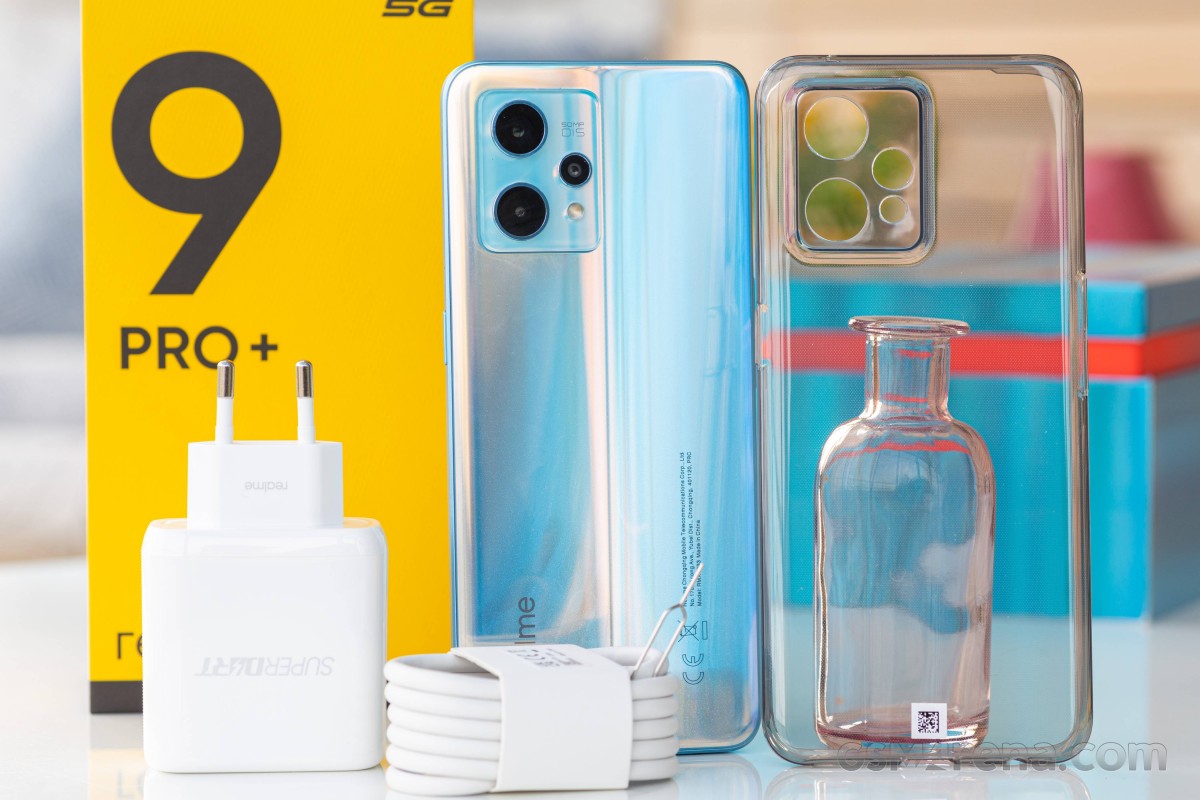 There is more, of course. Inside the yellow paper compartment, you will find a soft transparent case. It won't interfere with the color-changing nature of the photochromic rear panel, which is nice.

The battery Life of this Phone is really strong, more tham 6 houres of Screen on time( realisticly by normal to heavy usage) Those comments who said that the battery is bad are Fake, i use the Phone 3 monthts now. Don't believe those Fak...

What's the point in having ultra fast charging when it discharges just as fast? Battery drain is so fast on this phone it's ridiculous and realme won't even acknowledge

Is bascially the same.