Aside from the slightly differentiating dimensions and weight, the Realme GT2 and GT2 Pro share almost identical chassis. The GT2 Paper-like options are 5 grams heavier than their GT2 Pro counterparts, while the smaller display has resulted in a slightly shorter GT2 as well. Interestingly, it's 0.4mm thicker than the Pro and is also almost a millimeter wider, probably due to the bezels.

Speaking of, the GT2 carries visibly thicker bezels all around. It's particularly noticeable in the bottom and side parts of the frame. The punch-holes for the selfie cameras appear to be identical. 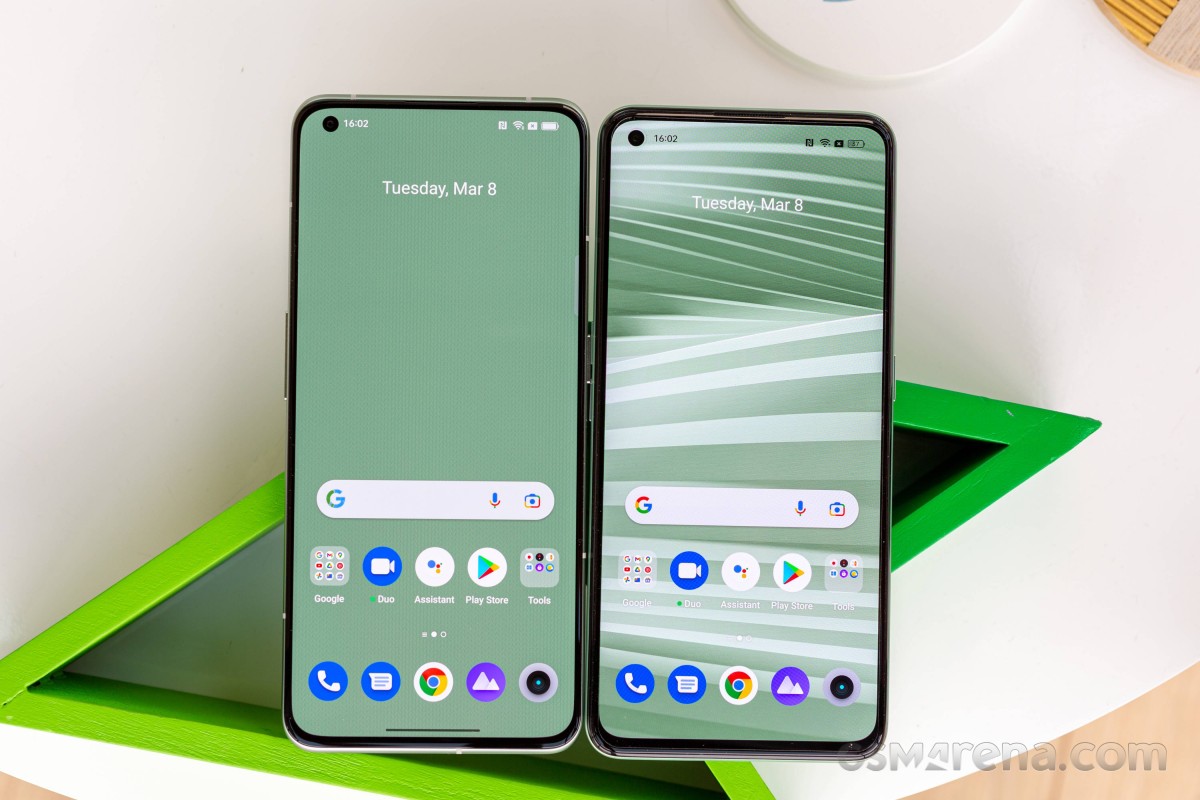 There are some small differences in the camera island as well. The vanilla GT2 has a narrower camera piece and the 50MP OIS inscription placed between the main and the ultrawide lenses. The two-tone LED flashes are replaced with a cool and a warm LEDs. 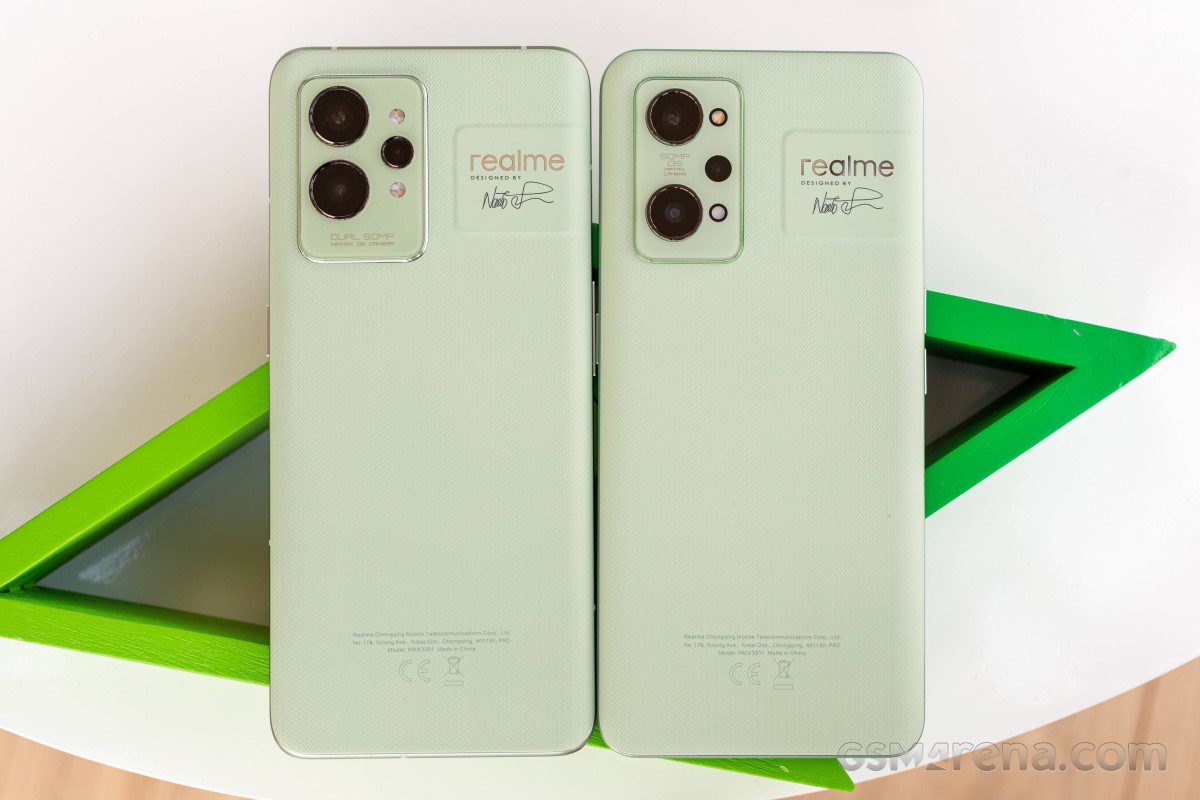 This time around, we got the Paper Green color, which isn't limited to just one or two memory configurations. It's available in all flavors as opposed to the previous Realme GT 5G, which had the vegan leather edition reserved for the higher tiers. The Paper White and Paper Green phones are made of bio-based polymer, leaving 35.5% less carbon footprint, but Realme doesn't specify compared to what. Perhaps the OEM refers to the standard materials used for smartphones, such as plastic and glass. 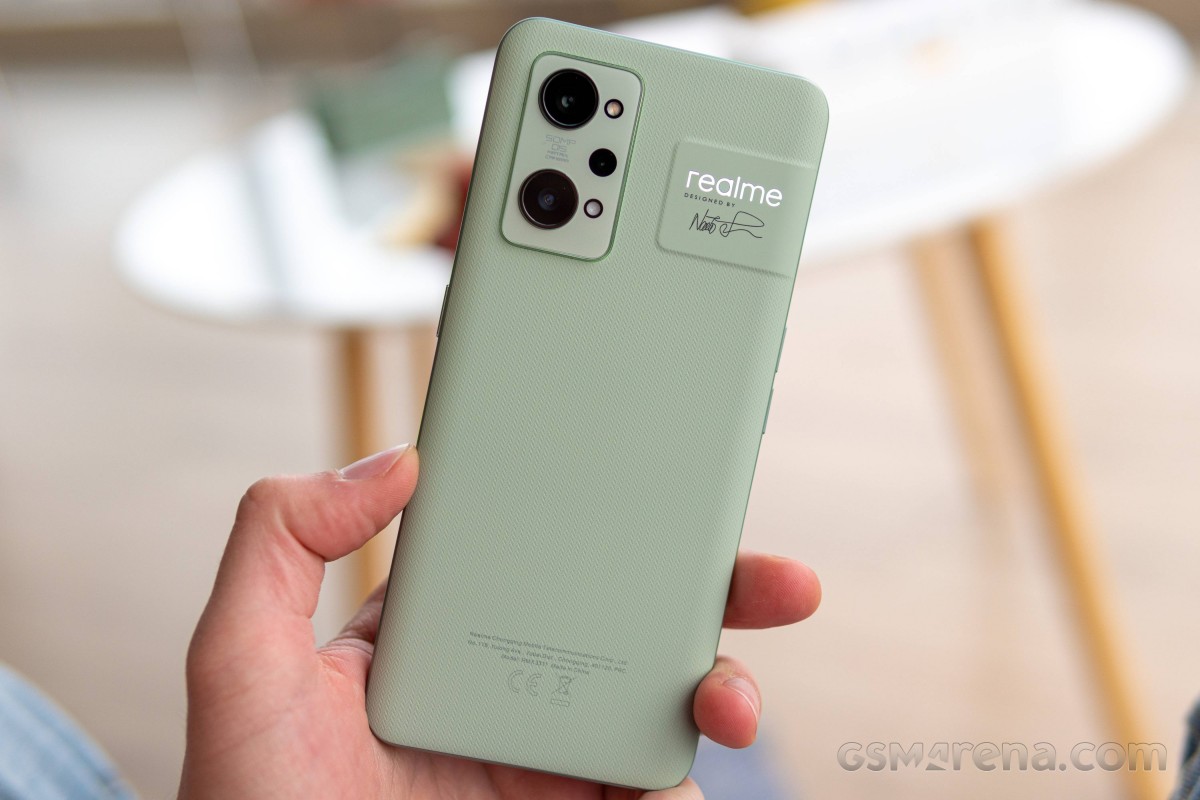 The company has worked with the Saudi Arabian firm Sabic to come up with a paper-like texture, hence the color names. Realme once again worked with Naoto Fukusawa, the designer who helped make the GT Master series last year. That's why you get the laser-engraved signature of the designer. 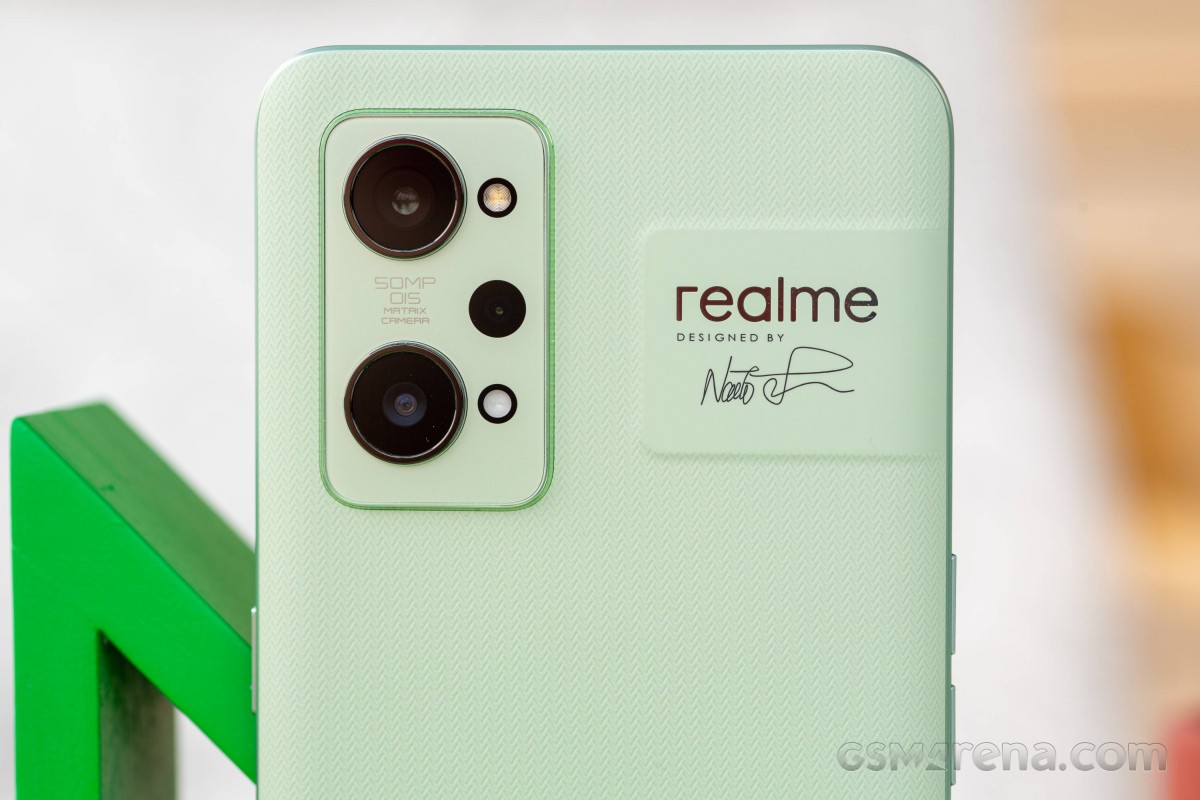 The surface itself indeed feels like paper, but we couldn't get over the notion of plastic. It's definitely lighter than glass and takes away that premium feel you usually get from a proper flagship phone. However, there are some upsides to this. In case you are not a fan of it, Realme also offers the Steel Black iteration with frosted AG glass with a smooth finish. 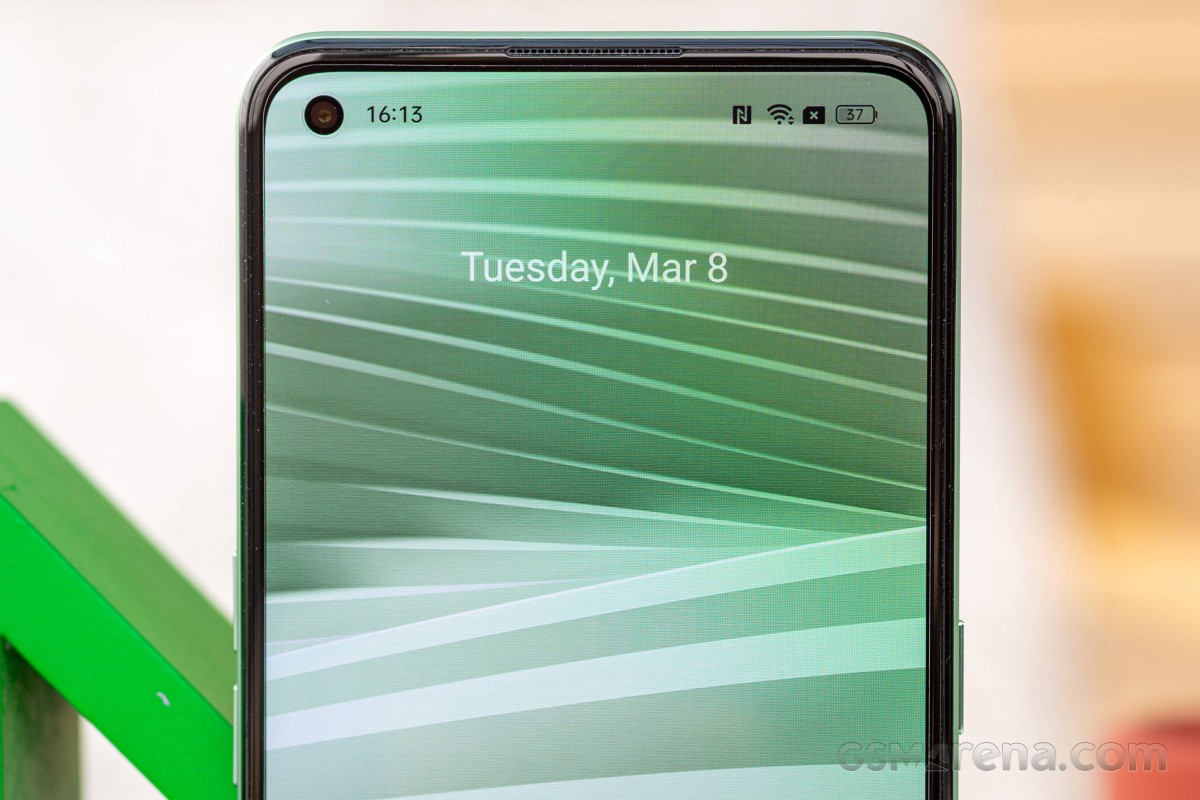 First, scratches would be less noticeable on a non-shiny surface. Secondly, the material provides a superior grip compared to glass and smooth plastic. And thirdly, the fingerprints and smudges are no longer an issue here. So for some, the not-so-premium-feel could be a reasonable trade-off given the advantages of the polymer. The non-designer Steel Black and the Titanium Blue variants retain the smooth AG glass build if you prefer how it feels to touch. 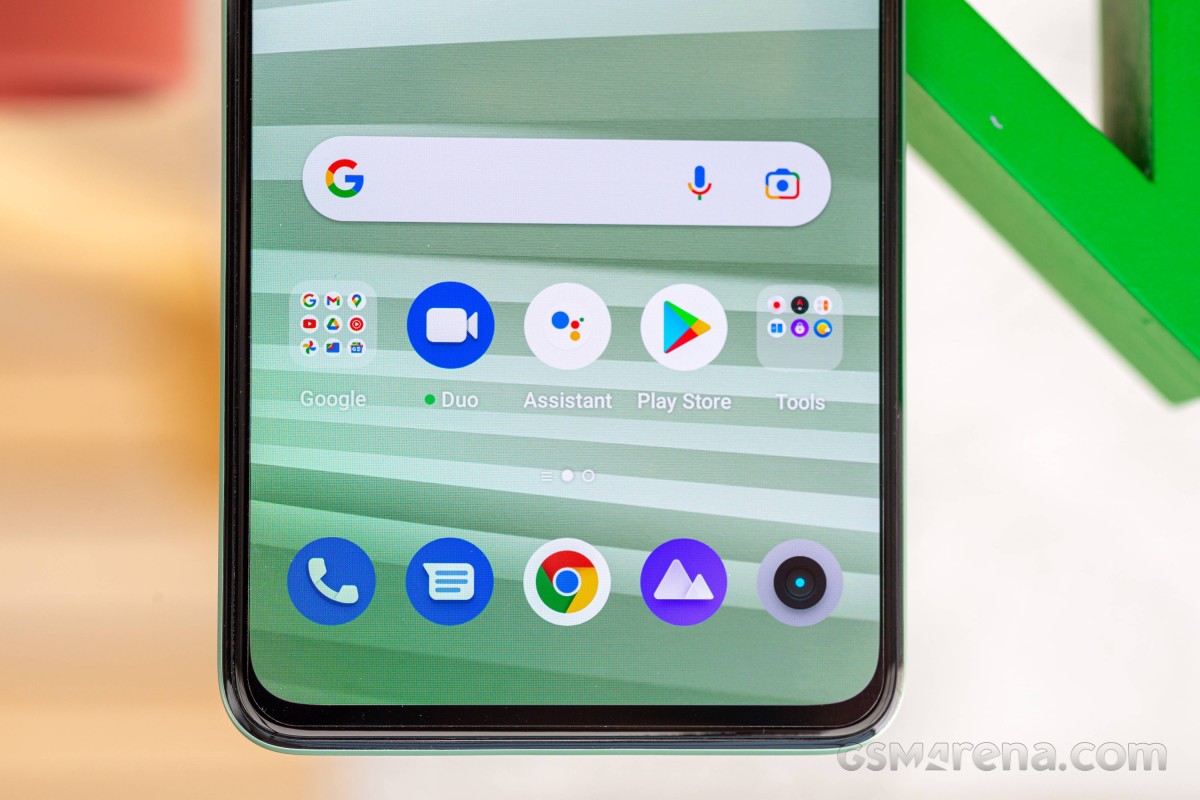 Going around the sides, we see the plastic frame, and the back plate seamlessly transitions into the oval side frame with no protrusions or ridges. The glass panel's transition on the front isn't as smooth as on the Pro model, though.

You can easily see the antenna cutouts all around the frame, as the phone incorporates a 360-degree antenna design, which Realme is really proud of. But instead of calling it an Antenna Array Matrix System like on the GT2 Pro, Realme calls it HyperSmart Antenna Switching here. Which is essentially the same thing in our book - a smart software dynamically switches between the 11 antennas placed around the device.

Unfortunately, the WiFi and 360-degree NFC features aren't available on the GT2. We found the latter to be particularly useful.

Realme went for two separate volume buttons instead as opposed to the volume rocker on the Pro for some reason. Aside from that, there's nothing else out of the ordinary around the frame. We have the power button on the right, which is a tad higher but still within thumb's reach. The bottom houses a dual SIM card slot, the USB-C connector and the bottom-firing speaker.

And while we are on the topic of positioning, we can't get over the fact that Realme messed up the fingerprint reader placement this time around. The GT2 Pro had it right, whereas the vanilla has it too close to the bottom edge requiring some awkward finger gymnastics. Especially if you have a bit longer fingers, or thumbs, for that matter. It could be due to the different display, or it could be some other limitation. Still rather strange to see the huge difference in placement on both handsets. 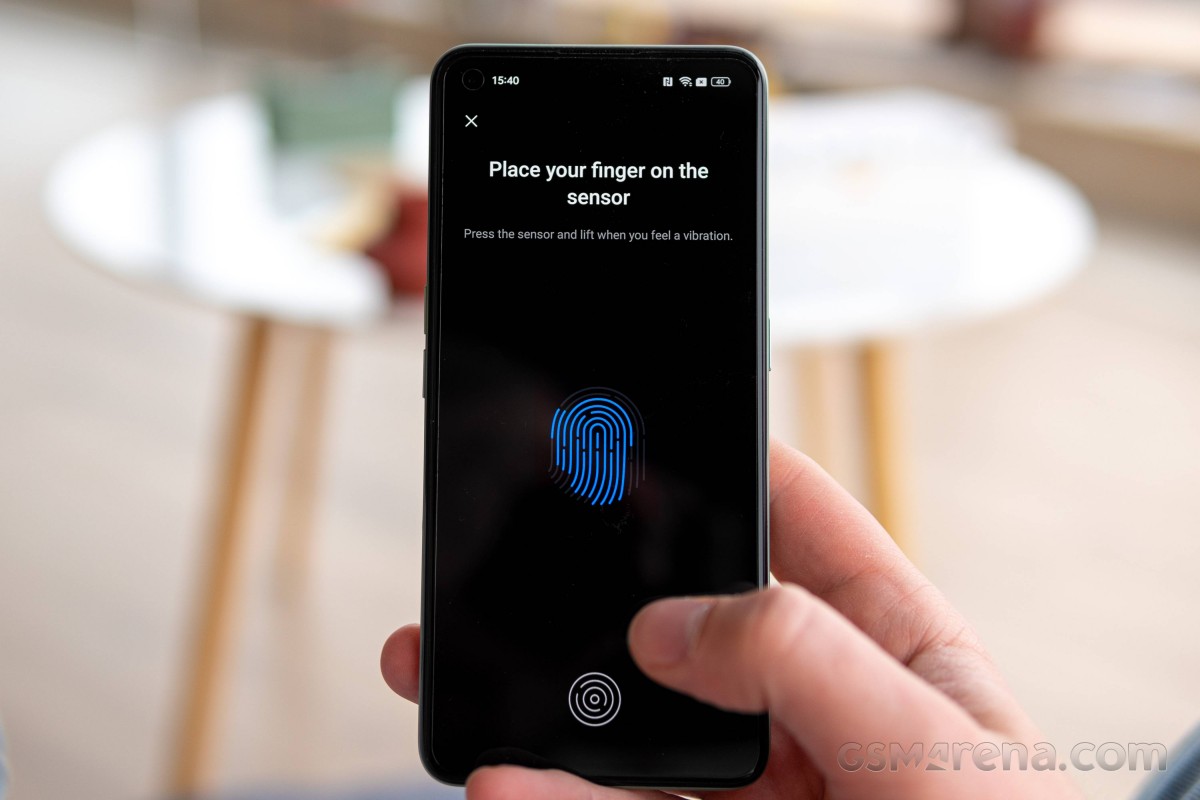 Thanks to its lightweight back, the Paper White and the Paper Green variants weigh in at just 194 grams (add 5g for the glass options), and thickness is just 8.2mm. All that camera hardware gives the handset that distinct top-heavy feel, yet the GT2 Pro doesn't feel hefty at all. It's not too shabby for a 6.62-inch device.

Overall, we liked the design, and we applaud Realme's effort of offering something different in the sea of glass sandwiches. Although the sub-premium feel of the texture may not be to everyone's taste, it does have its positive traits. And one could argue that it's more suitable for the €550 GT2 than the pricier €750 GT2 Pro.

How is this a tablet?