Earlier today Realme founder and CEO Sky Li confirmed the brand’s upcoming flagship will be called GT 2 Pro. The device is described as Realme’s most premium flagship to date and will be available worldwide.

GT 2 Pro - that’s how we are going to name our first and most premium flagship phone. Always feel great to deliver something new and exciting to users worldwide. #realmeGT2Pro pic.twitter.com/ngX5VI409S

In related news OnLeaks (via 91mobiles) provided our first look at the GT 2 Pro. The design is a big departure from the Realme GT and GT Neo2 with a Nexus 6P style camera visor spanning across the top part of the back. There are three visible camera modules housed in the contraption with two 50MP shooters alongside an 8MP snapper. It’s also said that all three modules will offer GR lenses developed by Ricoh which specialize in reducing ghosting and backlight resistance. 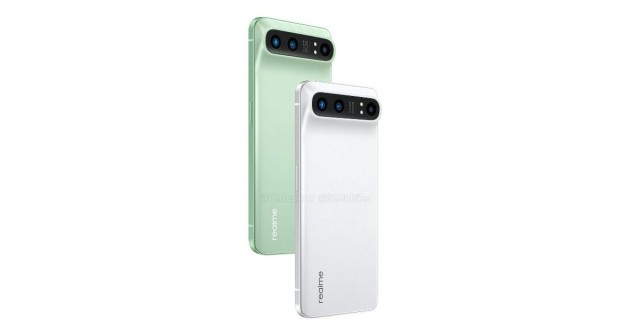 Realme GT 2 Pro also has flat metal sides and is expected to utilize Qualcomm’s upcoming Snapdragon 8 Gen1. The phone recently appeared with the flagship chip in an AnTuTu listing where it managed to record over 1 million points. The phone is also rumored to bring a 6.51-inch FHD+ AMOLED screen with 120Hz refresh rate, LPDDR5 RAM and UFS 3.1 storage, 125W UltraDart charging and Realme UI 3.0 based on Android 12 out the box.

Well I guess you must be happy now, considering they went with a regular camera island instead.

This back design looks horribly awful! 🤢🤮🤧

NO!! I didn't talk about innovations being brought on the table and ..i talked about being copycat and its not just on tech but marketing and profit too,apple launched their self repair program and within a week xiaomi copies it...plain ridicul...