Realme is experienced in making good-looking phones, and the premium Realme GT 5G is a real showoff. It's an all-glossy smartphone with a traditional dual-glass build and a plastic frame in-between. 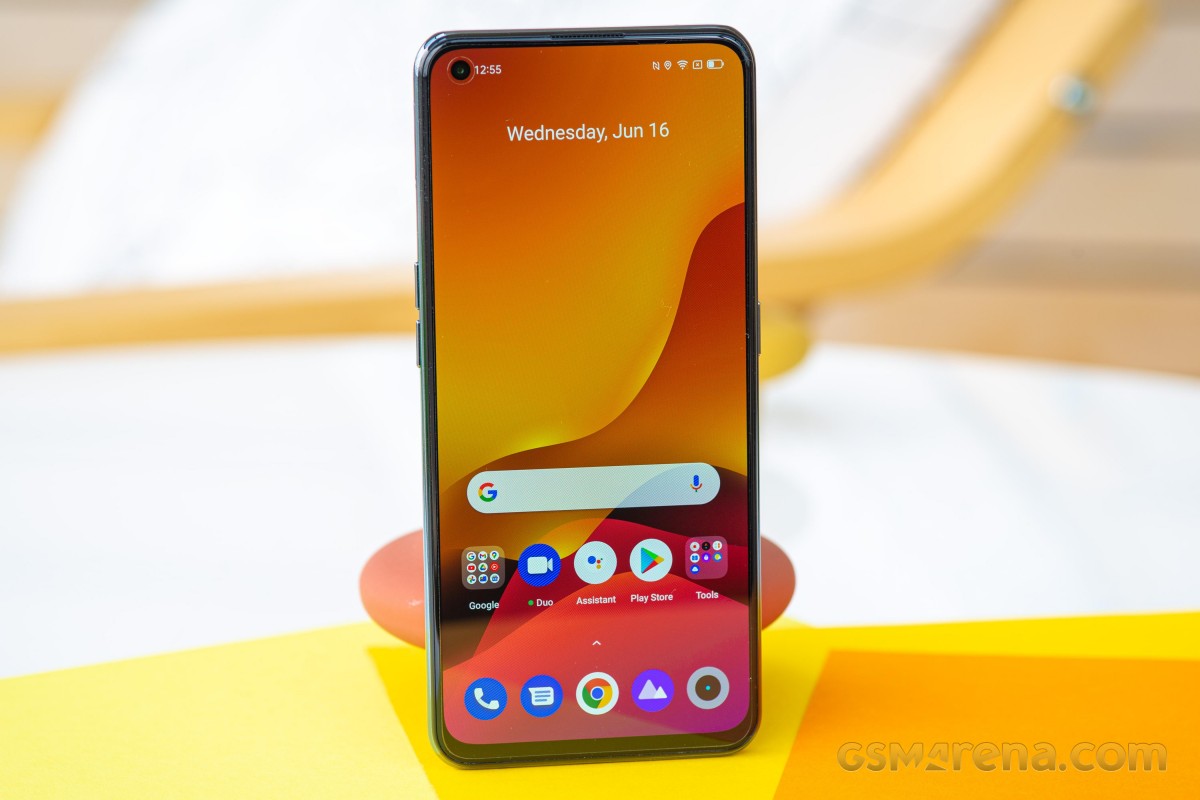 The front glass is flat, while the back panel is curved towards the sides. It's what Realme calls a 3D curve - a fancy name for something we've seen a thousand times. There is no official word on who the glass maker may be.

As you can imagine that these two glass pieces are giant smudge magnets, but that's often the tradeoff for looking pretty.

Realme is offering the GT in Dashing Blue (ours), and Dashing Silver, both featuring Accelerated Track Pattern as the maker calls it. The Blue one has this dark blue patch in the middle that slowly transitions into black towards the side. There is also a subtle V-shaped texture embedded under the glass. 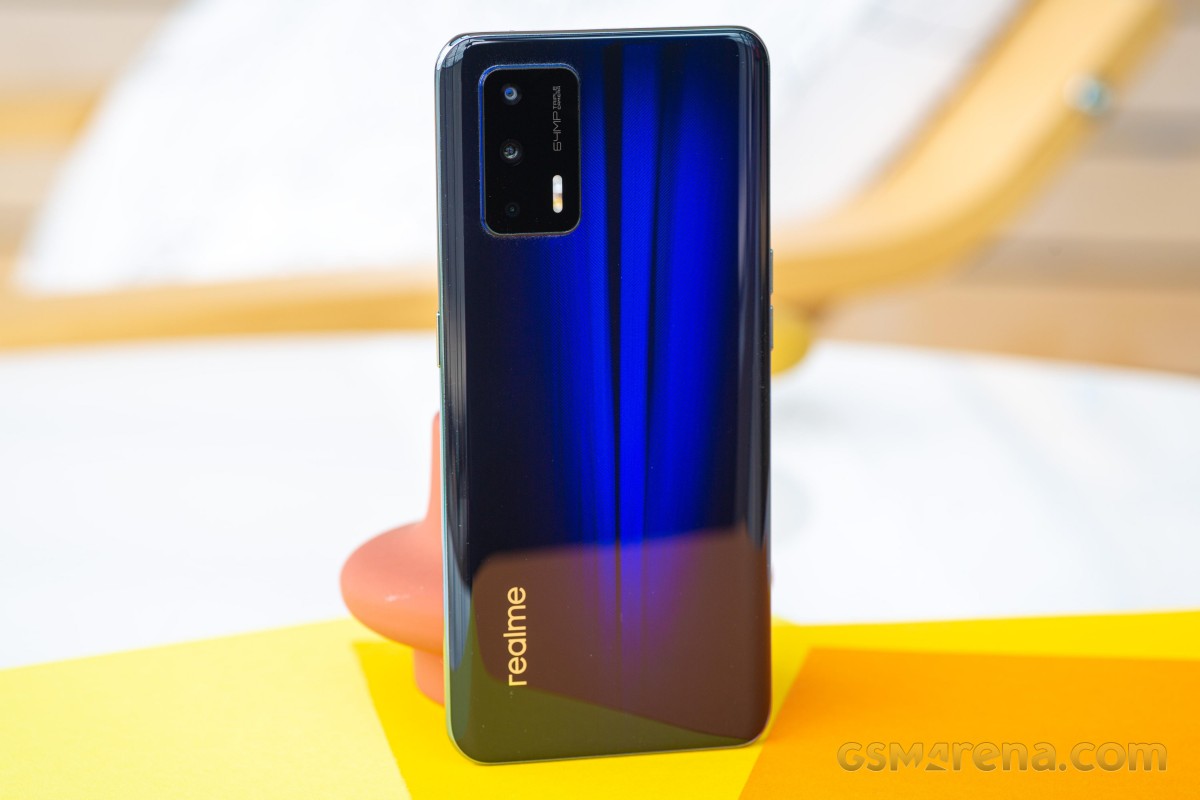 The Silver model transitions from silver towards blue, and the effect is equally, well, dashing. 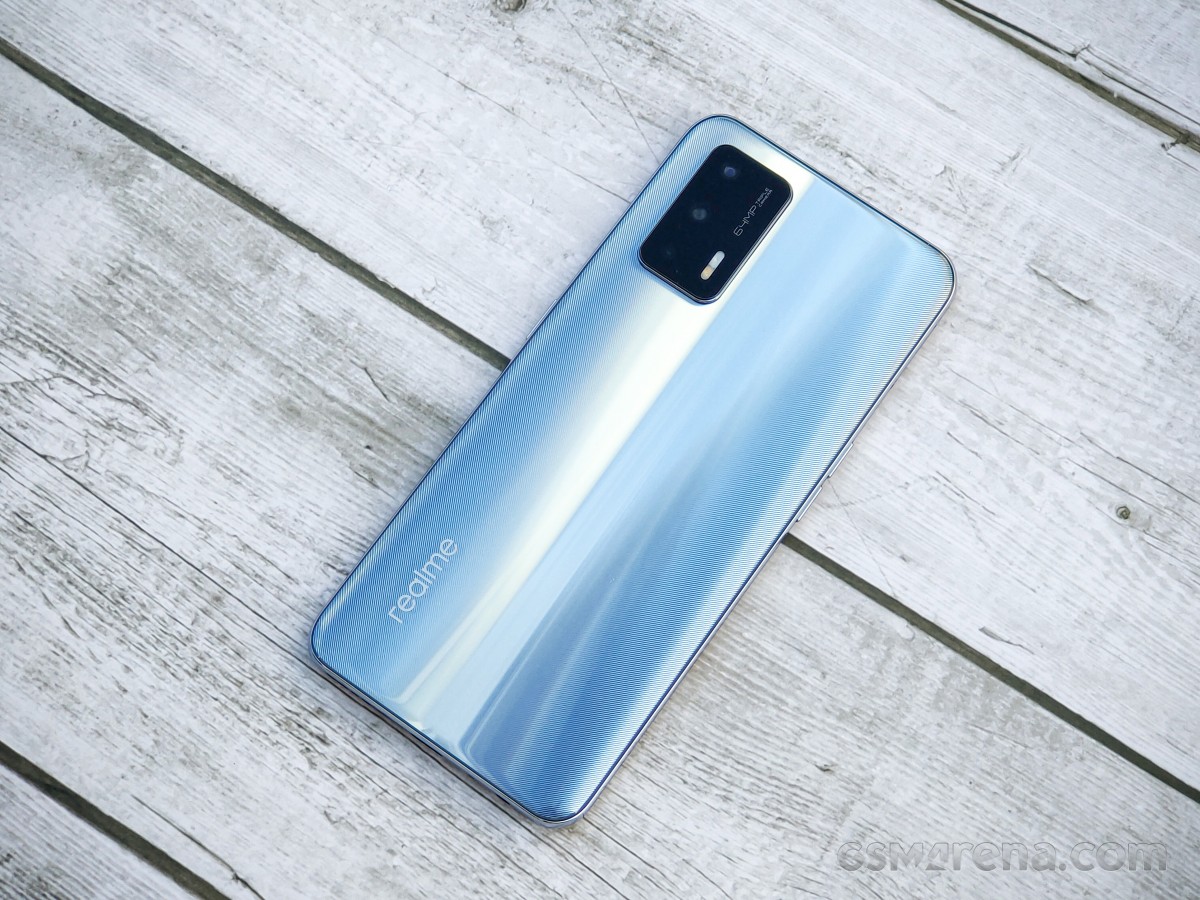 There is also a Racing Yellow option, available only with the top-tier memory configuration. It has Dual-Tone Vegan Leather back - most of it is yellow with a black stripe that's as wide as the camera glass. Realme says the leather is wear- and tear-resistant and is treated to be odorless. 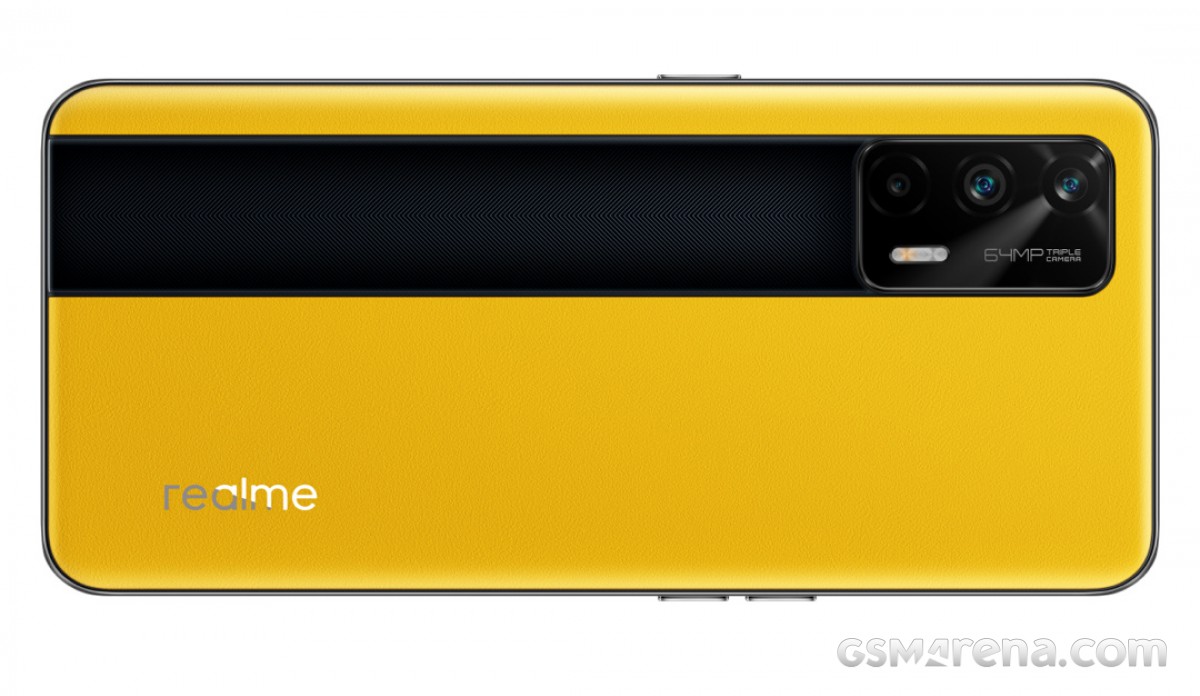 The 6.43" Super AMOLED screen is one of the Realme GT's highlights, with the other one being the most current flagship Snapdragon chip. The display is of 1080p resolution and 20:9 aspect, but it impresses with 120Hz refresh rate and 360Hz touch sampling rate. 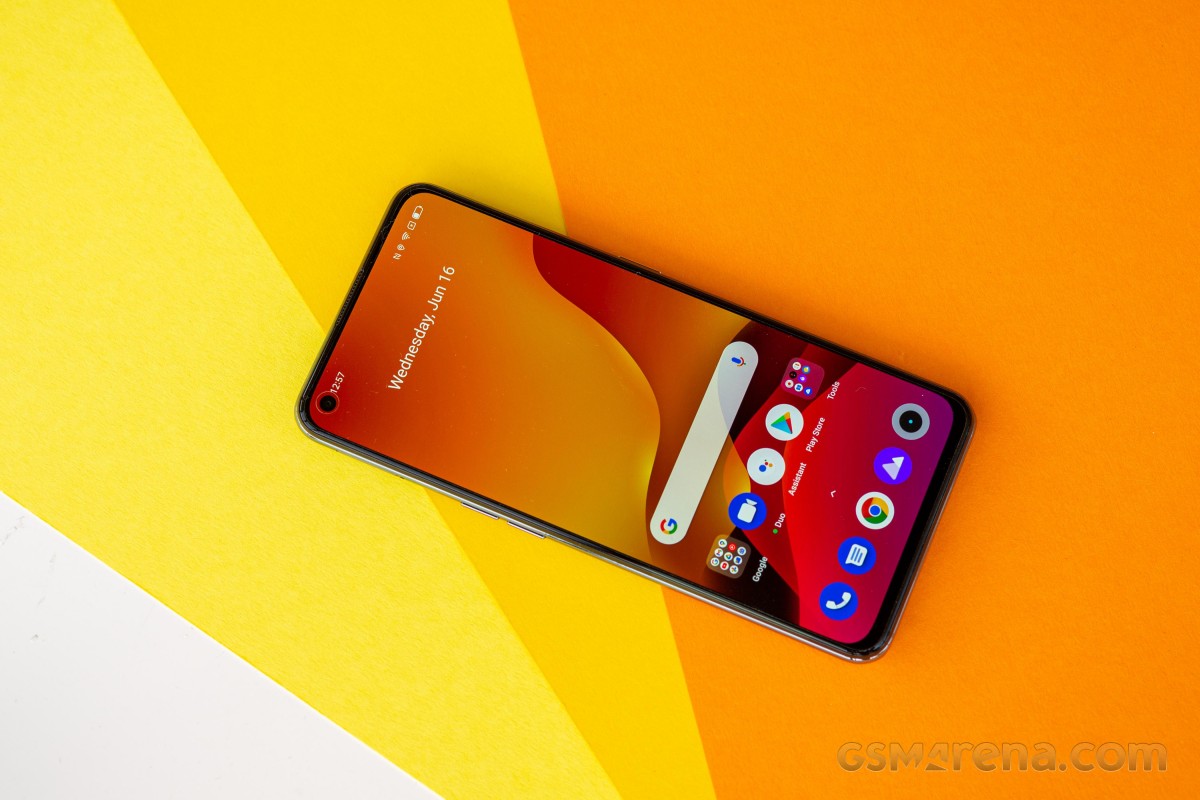 There is a small punch-hole around the top left corner for the 16MP selfie camera. It's not the smallest we've seen, but not the largest eyesore either.

Above the screen, within its frame, is the earpiece behind a thin grille. This earpiece also acts as one of the speakers, and our initial impressions are good, though far from the best we've experienced. 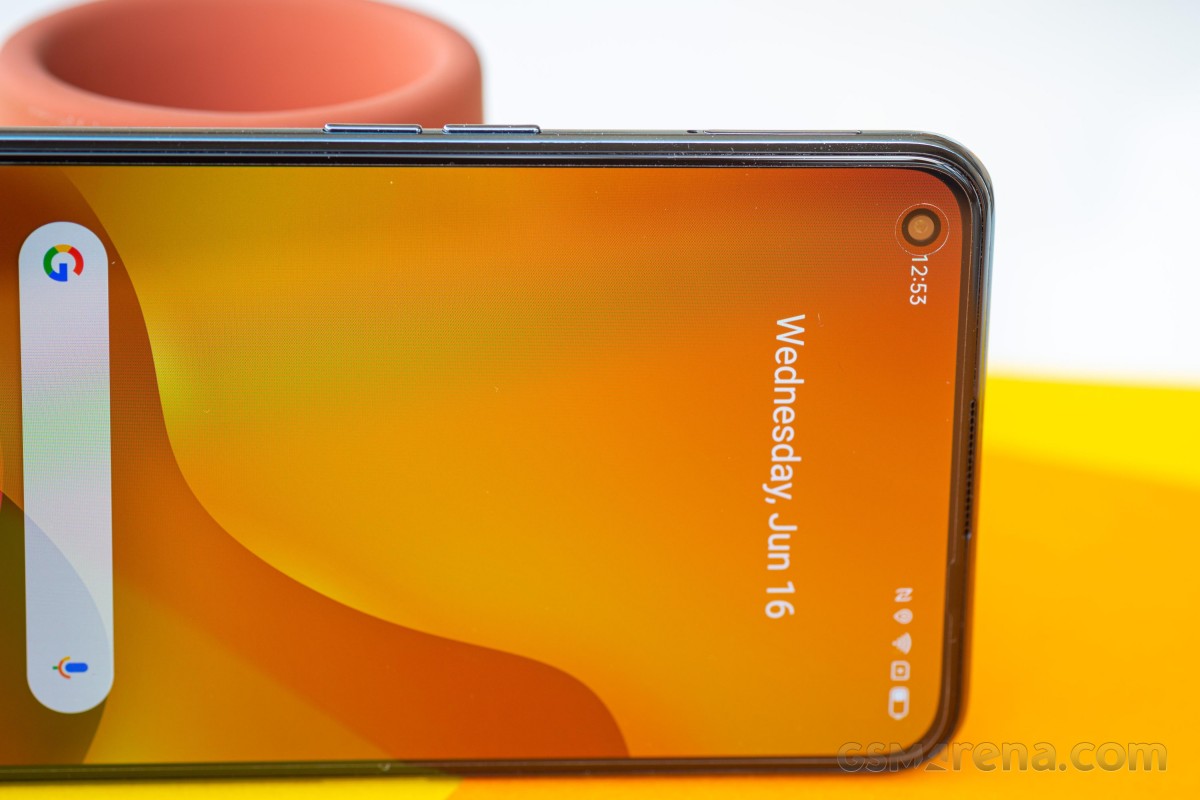 There is also an under-display fingerprint scanner - it's the latest optical solution and works great. The sensor is fast and responsive, with excellent accuracy. 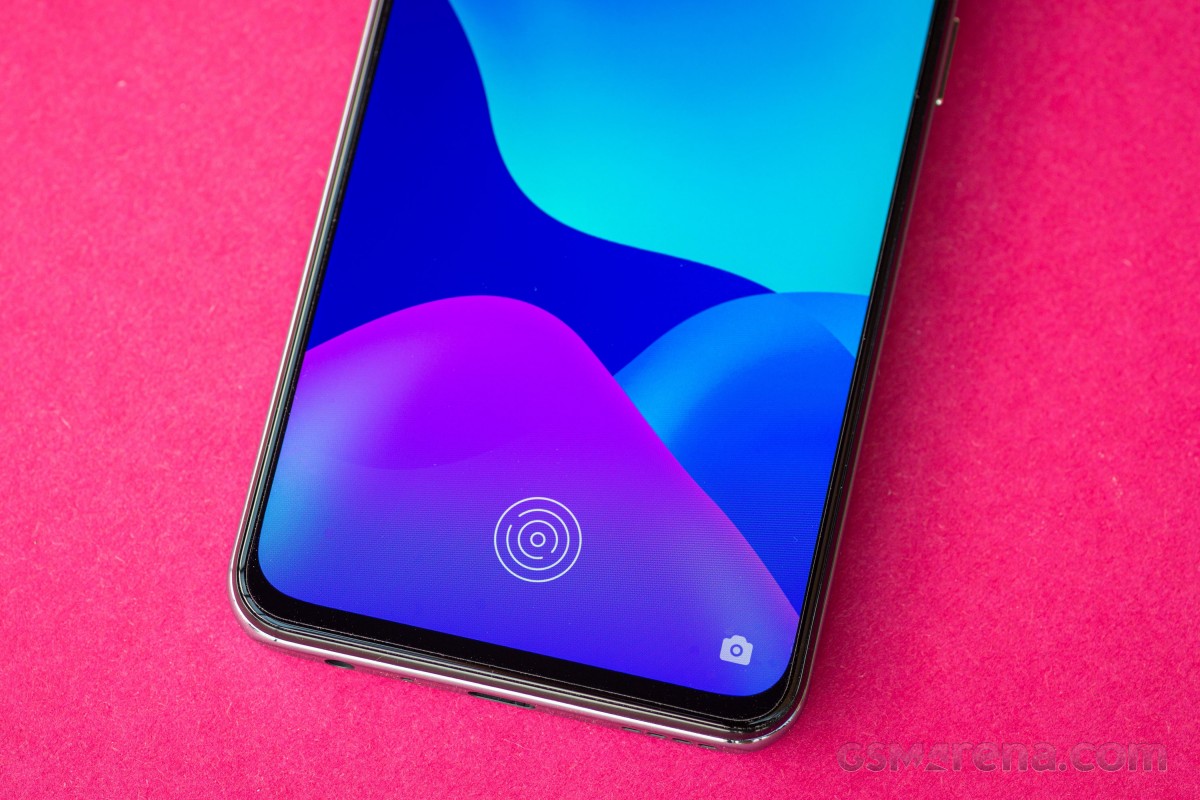 Finally, looking at the OLED bezels, we've certainly seen thinner, but for this size, feature set and price, we'd say they are perfectly fine.

The rear glass has fancy 3D curves, more prominent on the longer sides. Our Dashing Blue version is captivating - all these subtle effects make for one really cool and unique look. The camera glass is jutting out and contains three snappers - a 64MP primary, an 8MP ultrawide and a 2MP macro. A dual-LED dual-tone flash is the last thing of interest here. The Realme GT 5G wobbles on a desk just as any other recent flagship or mid-ranger. 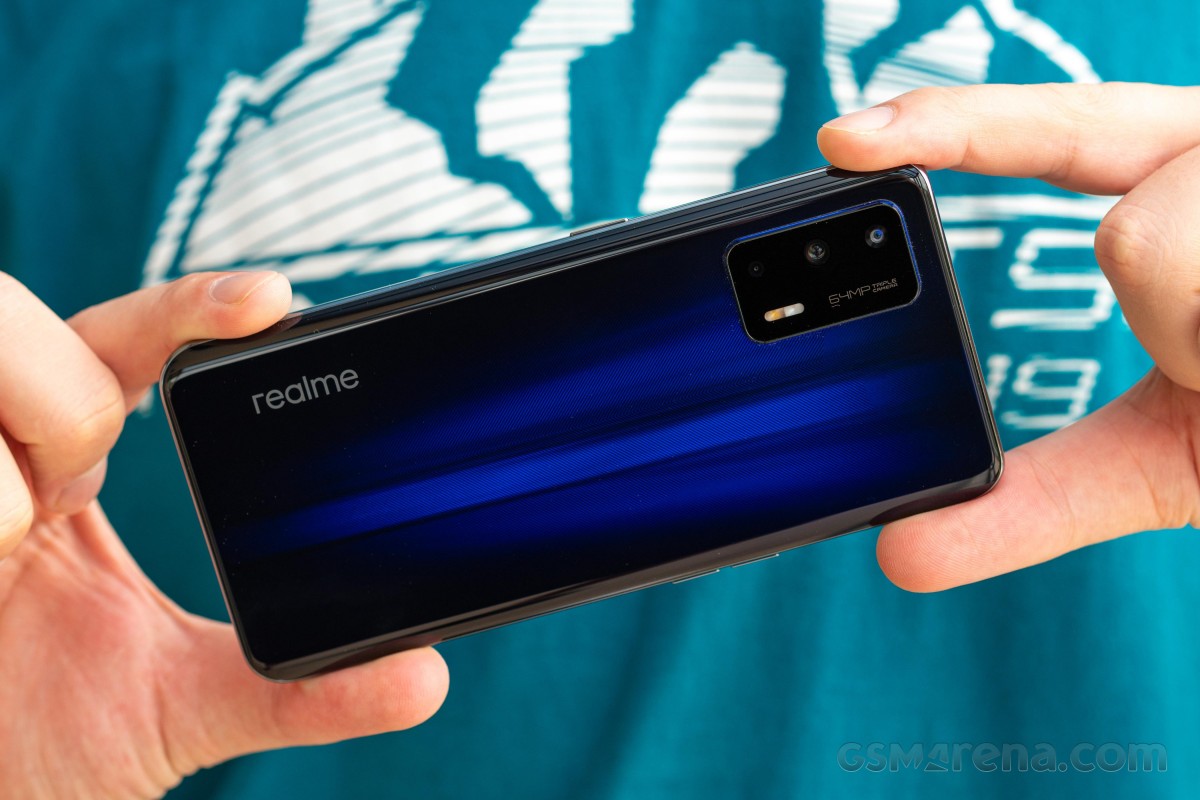 There is an instant tell-tale sign that's it's not a full-blown flagship, and that's the plastic frame. The frame has mostly flat top and bottom and slightly curved sides. Ours is painted in dark silver, and while glossy, it is not that smudge-friendly. 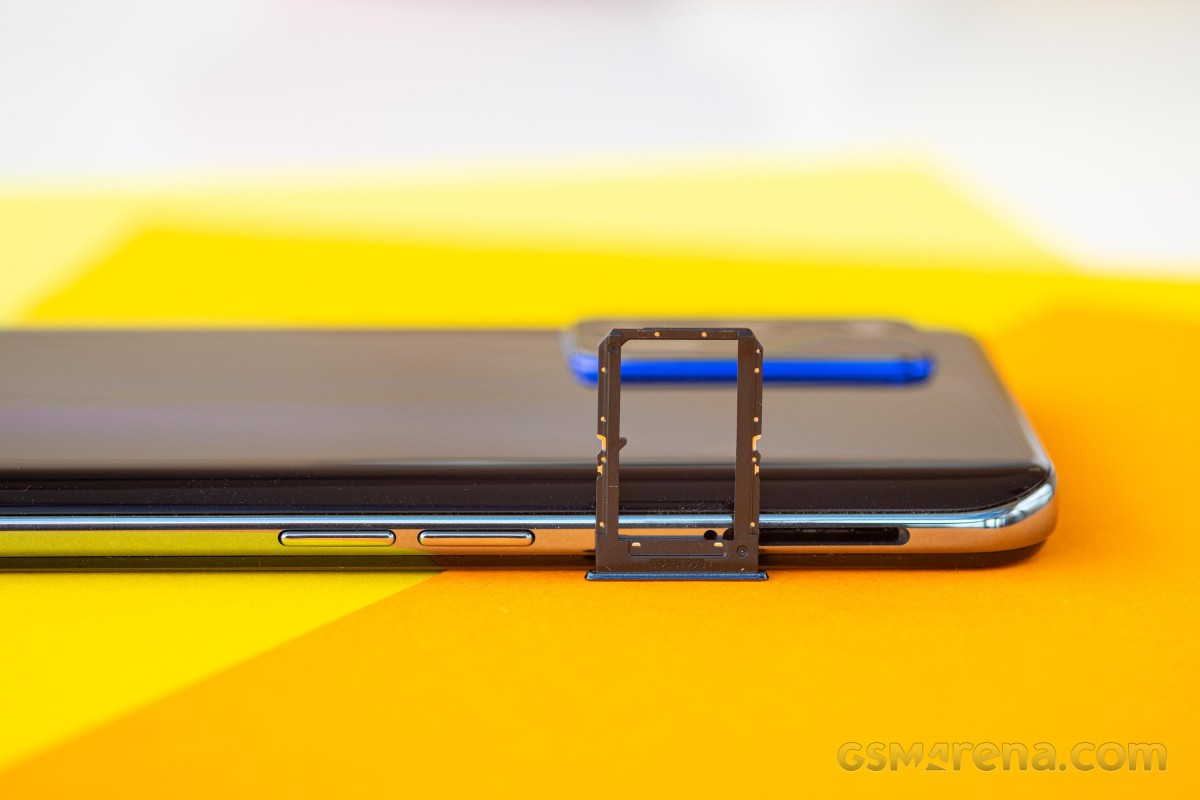 The dual-SIM tray and volume keys are on the right, while the power/lock button is on the left side of that frame. 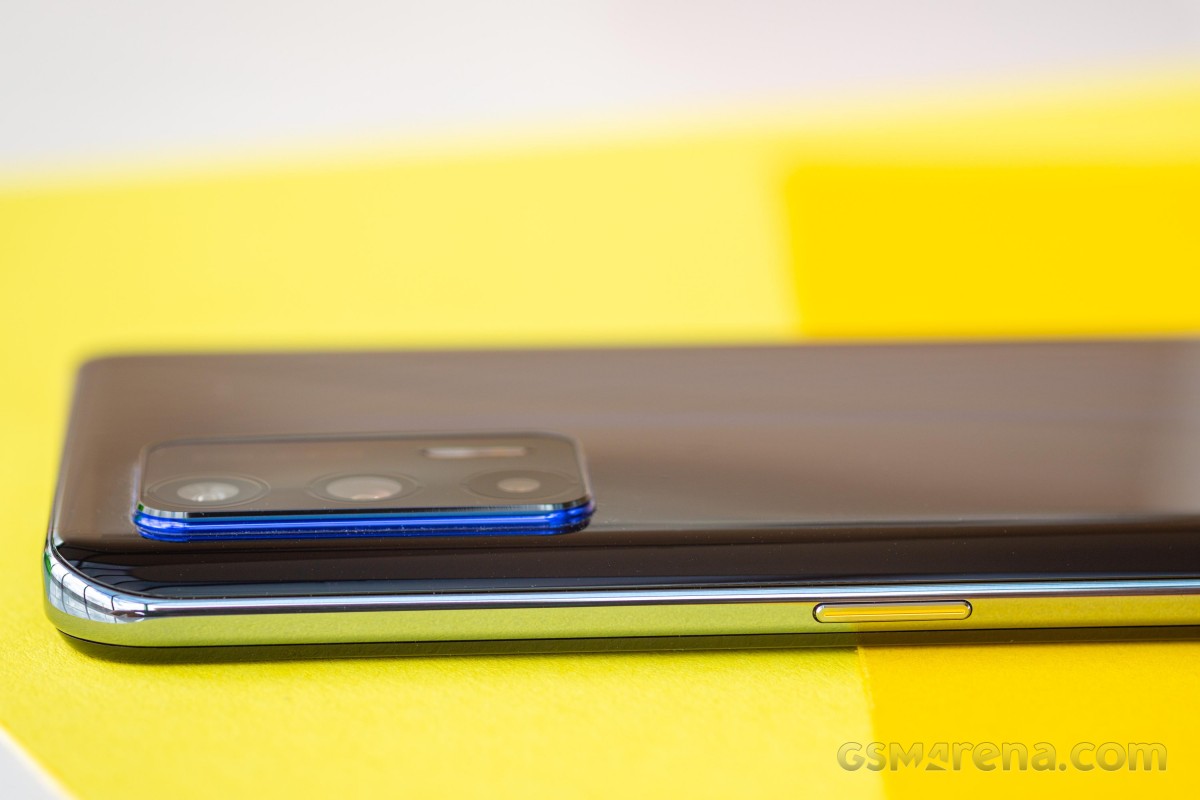 The top houses a lone microphone for stereo audio capturing during video recording. 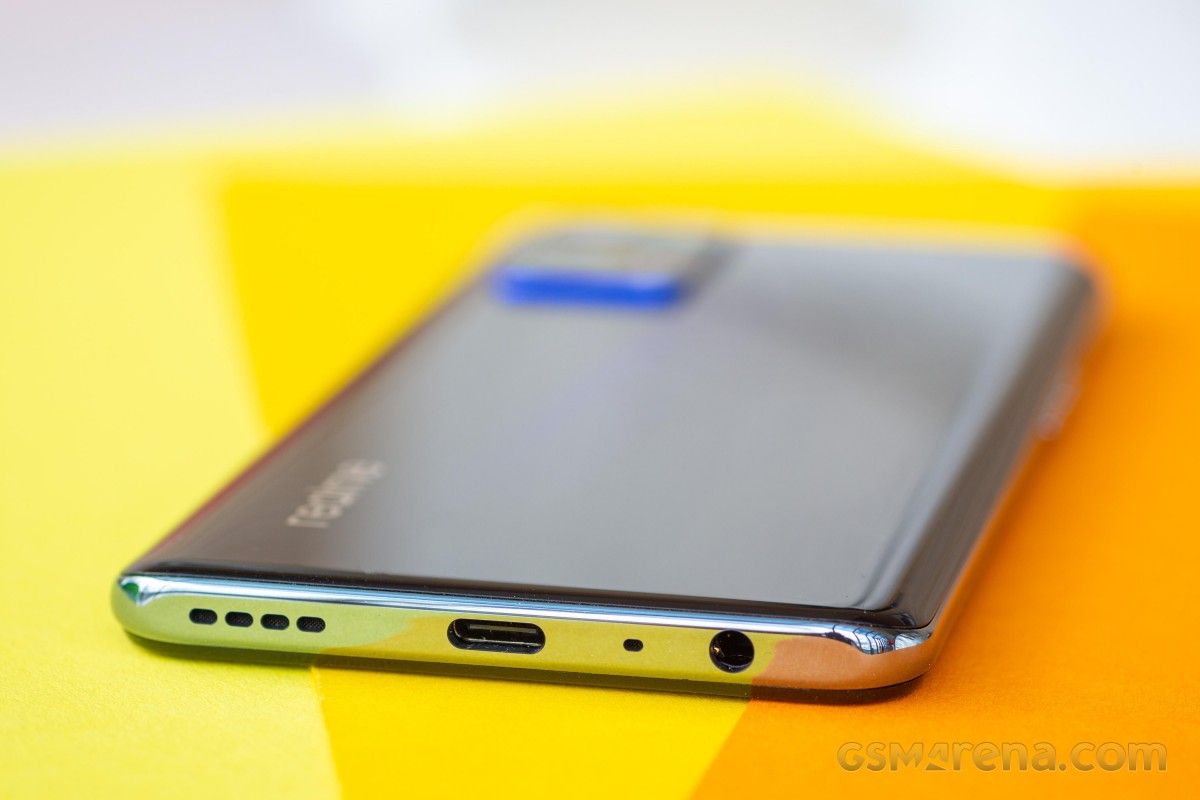 The bottom has the USB-C port, the 3.5mm jack, the mouthpiece, and the second speaker.

The Realme GT measures 158.5 x 73.3 x 8.4 mm and weighs 186 grams - meaning it is a bit more compact than most of the recently released high-tier mid-rangers and flagships. But despite being smaller than usual, the phone manages to fit a great screen, chip and one particularly large 4,500mAh battery. 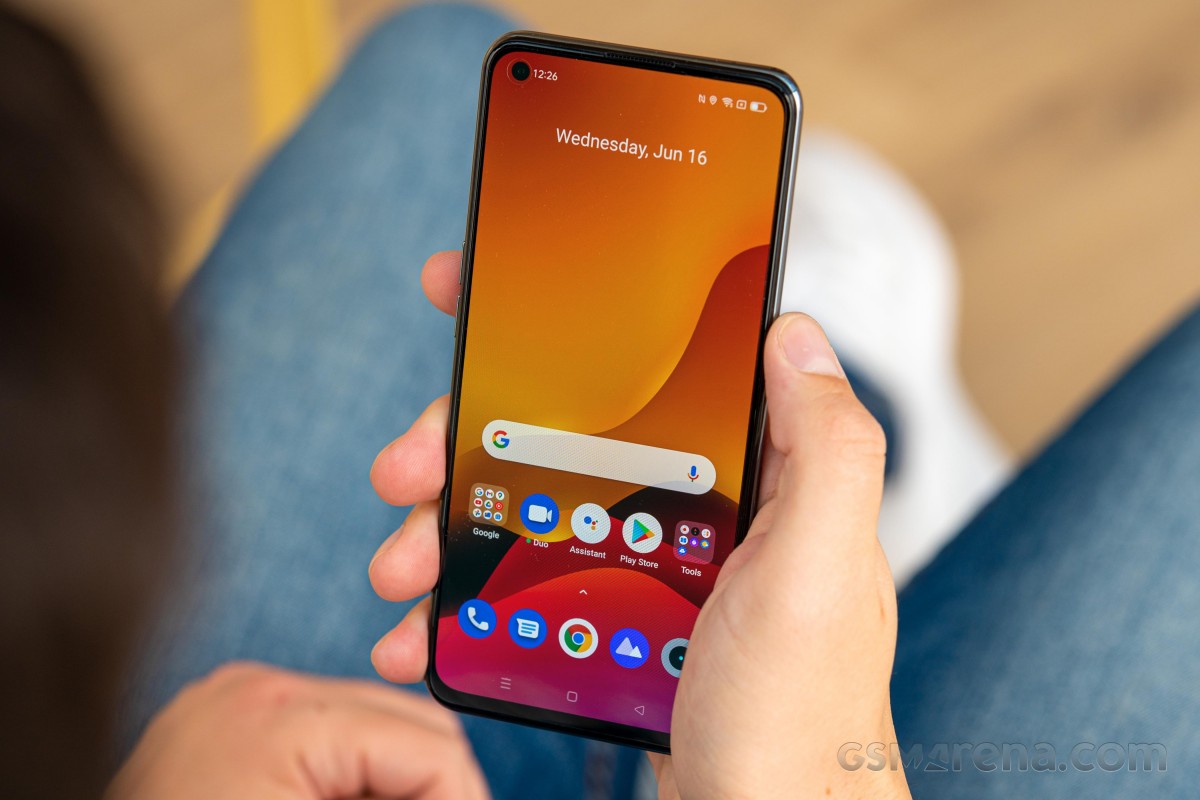 Handling a glossy phone is not an ideal experience, no two words about that. Yet, the Realme GT provides some grip thanks to its frame - it's not as slippery as the panels, on the contrary. And with the smaller than average body, the GT makes for a good user experience and handling. If you are going to shoot a lot of pictures or switch the phone's orientation often on the go, we'd advise using the bundled protective case - it won't take away a whole lot from the looks but will make handling the phone feel much safer.

Does the Realme GT now support High Refresh Rate Gaming? Also it's not mentioned here so I ask, what is this "GT Mode" being advertised? This seems like a good option in my country because we don't have any other alternatives...

there is, while i ran dedicated benchmarks, heavy heat and theottling, but thats no use case for daily normal work