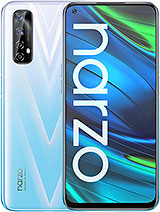 Is 65w dart adapter available in the box??

domoon, 23 Sep 2020i want realme 7 pro, but at the price of realme 5i Well only in your dreams, because that will be impossible

All phones nowadays look exactly the same, an almost 7 inch display, no chin or forehead and no sometimes no brand logo. They have no character nor cause any impact.

Noice, 22 Sep 2020Ever heard of smart fast charging Mr? If you were living in... morealso they won't risk lawsuits if it did literally blew up LMFAO

Azam, 22 Sep 2020This is a stupid concept from real me it used a very big ch... moreEver heard of smart fast charging Mr? If you were living in the past then yeah battery capacity and voltage would matter so your phone won't blow up. But with the current technology where people can push the limits while keeping the device safe, you can't say that the company is making a fool out of their customers just to reel them in and buy their products.

The strong RAM as well as the integration of the new gaming processor from Mediatek will make this a pretty decent option for interested mobile gamers.

Does this have radio, infrared, autocall recording, nfc (but not really a necessary), USB-C compatible, expandable memory card?

so the difference with Realme 7 is in lower camera, lower battery mAH but higher Wattage charging? i think they could've nerf the camera further to lower the price but with the megapixel war, guess it won't fly lol (despite iPhone sporting only 12MP camera)

This is a stupid concept from real me it used a very big charger small battery i thing it used a 65 watt charger for real me Narzo 20 model (6000 mah battery) 4500 mah battery can not take 65 watt power from adapter it take maximum 8 volt 4.5 amp which is equal to about 40 to 45 watt why real me make a fool to people

Anonymous, 21 Sep 2020It's disgusting, it is almost same as realme 7, same p... moreIf you dislike this device so much, you can lose yourself from here, the door is big

It's disgusting, it is almost same as realme 7, same processor, same display(ips), same front camera, it's pathetic. Atleast if they gave a samoled display, it could have been acceptable. But is it is trash. Realme launchs 5 phones in a month with almost same specs and soon it wouldn't be able to provide updates for it as it is outdated