The Narzo 30 5G features a couple of bold design strokes, even for the not overly restrained in terms of looks Realme. Placed side by side with the 8 5G, the Narzo does look more exciting, with the arrows in the racing stripe appearing to move as light changes angles. It's not that the 8 5G looks bad, but we'd say the Narzo has more personality. 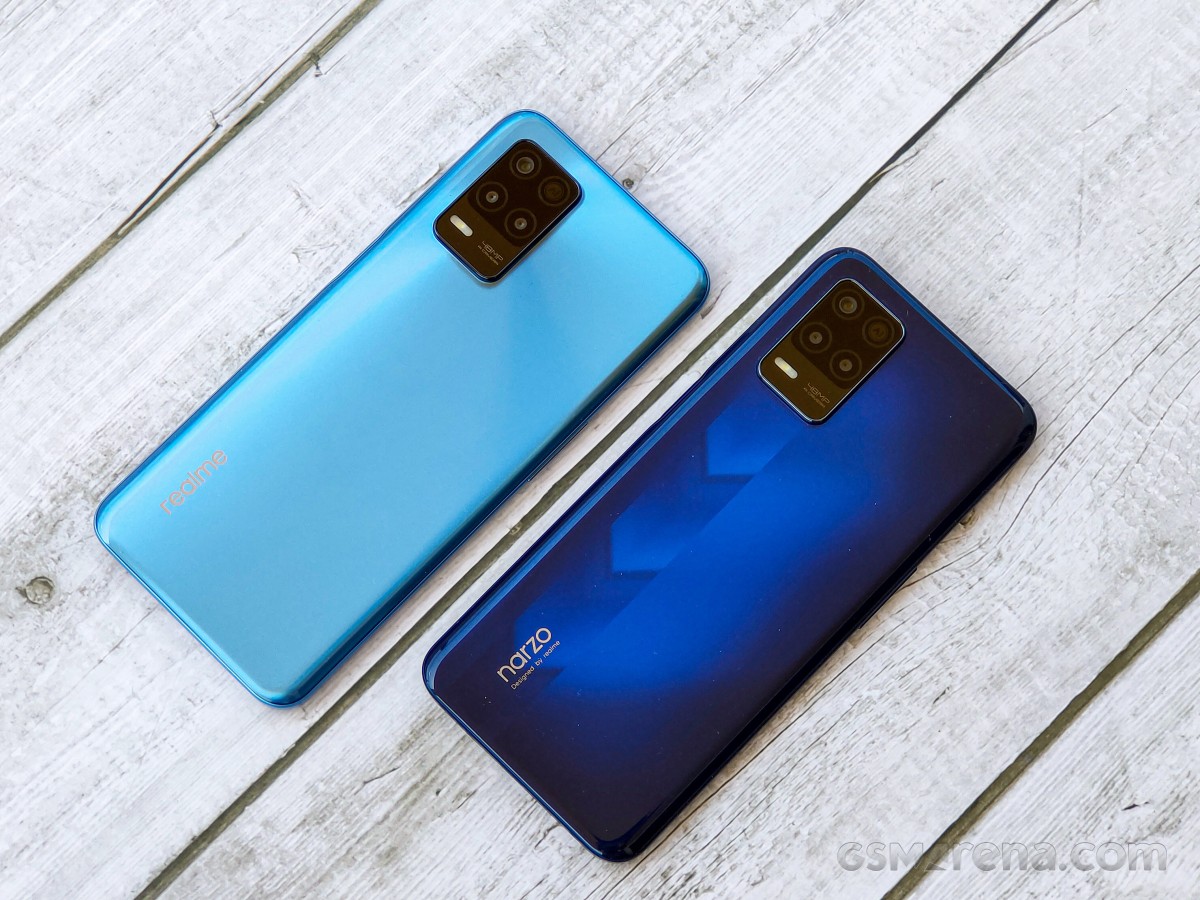 The arrows lead you from the camera island into the Narzo logo, which is in a contrasting shiny font on our Racing Blue variant. The logo is less prominent and a bit more stylish, we'd say, on the Racing Silver colorway.

The back panel is plastic, and it has a glossy finish, but it somehow wasn't quite as prone to accumulating smudges as other similar designs. 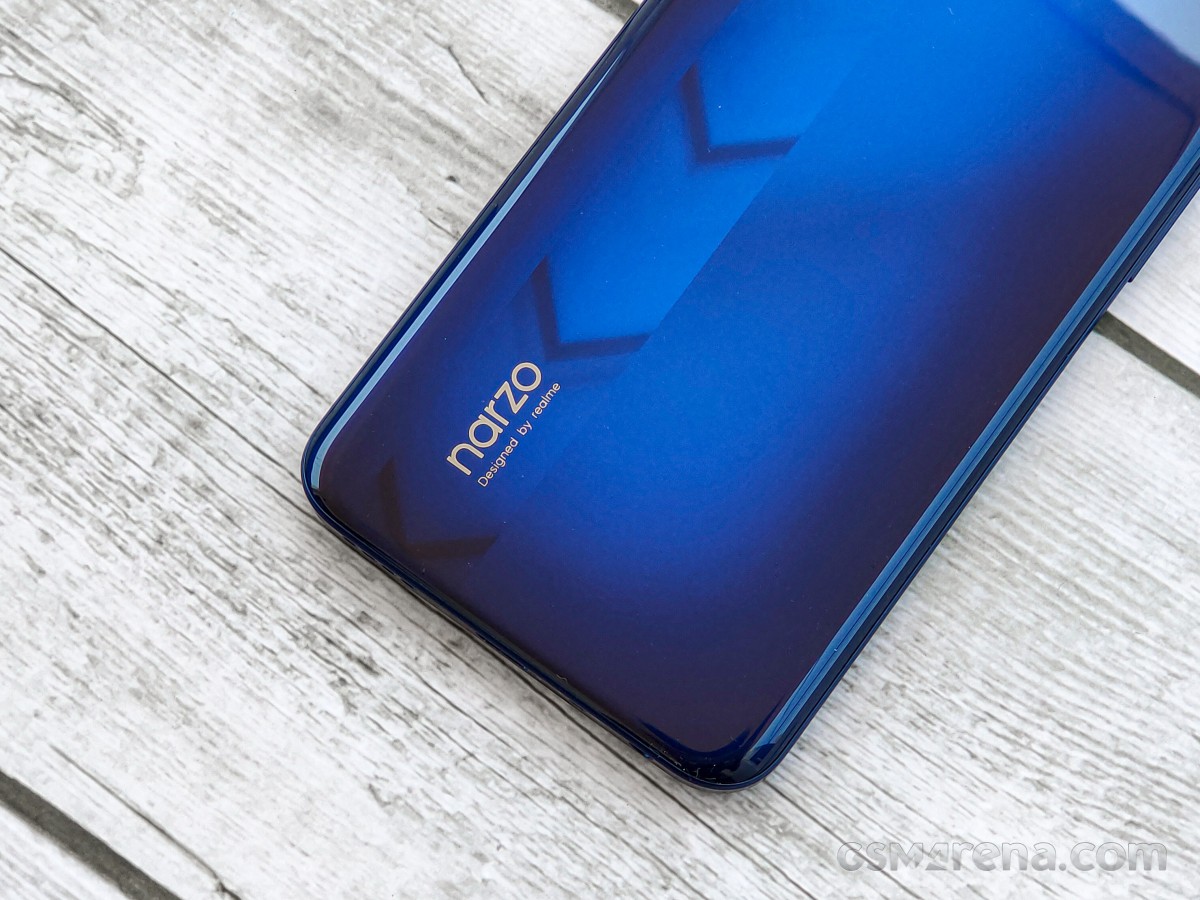 The camera island itself is identical to the one on the Realme 8 5G. It sticks out quite a bit, causing the phone to wobble if you're one to type on it when it's lying down on a table. The included case doesn't entirely solve that either. 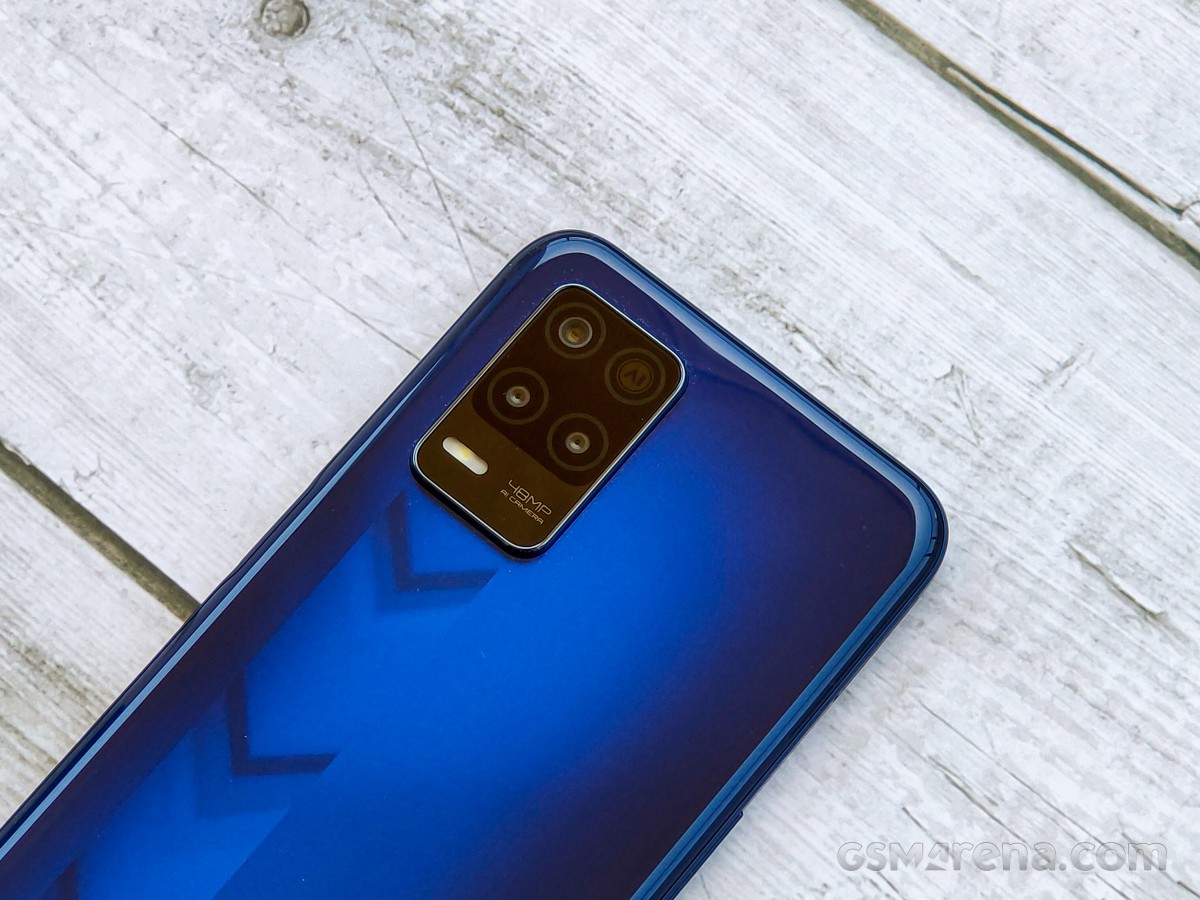 The frame of the handset is made of plastic and is painted to complement the back color. It's finished to a fine satin sheen.

The Narzo 30 5G operates in much the same fashion as the Realme 8 5G. There's a power button on the right side of the phone with a capacitive fingerprint reader embedded in it. Similarly to the 8 5G, we found the sensor to be fast and accurate, and there's a provision in settings for it to require a press if you find yourself activating the recognition by accident.

On the left side of the phone, you'll find the volume rocker, which clicks positively, the same as the power button.

The card tray is on this side as well, and it takes up to two nano SIMs and a microSD card, all three at the same time.

Down at the bottom, you get the USB-C port in the middle, the single loudspeaker to one side and the headphone jack and primary microphone on the other. 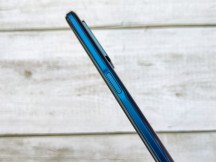 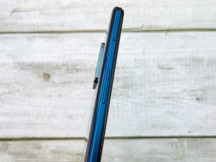 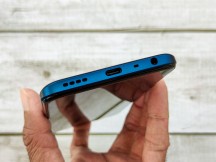 Over on the front of the Narzo, it's the same 6.5-inch LCD as on the Realme 8 5G. Realme says it will do 480nits when adjusting brightness manually and go up to 600nits in high brightness mode (not a specific mode you can enable, it's up to the phone), and those numbers do check out on the 8 5G, so there's no reason to doubt that the Narzo 30 5G can achieve them as well. 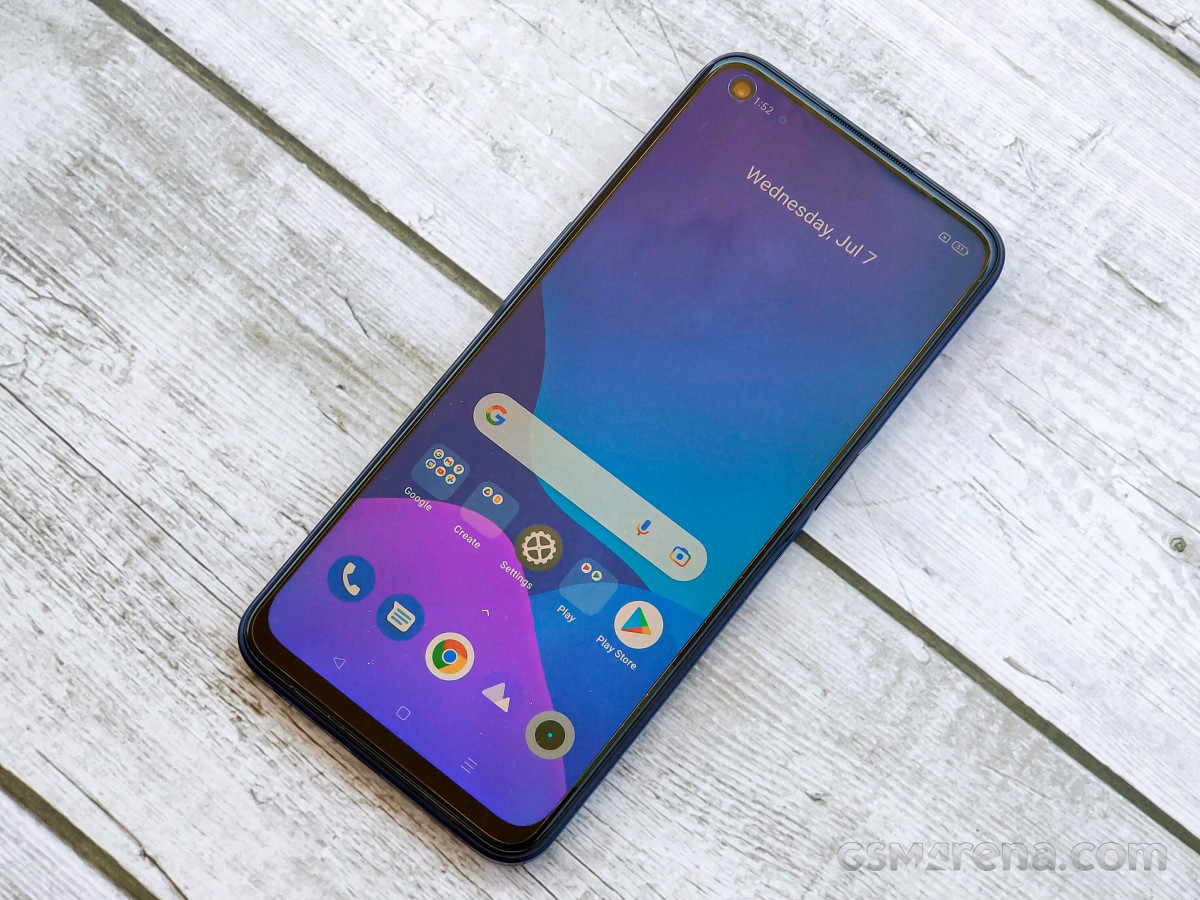 The phone comes with a pre-applied plastic screen protector offering a certain degree of peace of mind, but it tends to get pretty smudged up, and it doesn't feel as nice as swiping on the glass display. 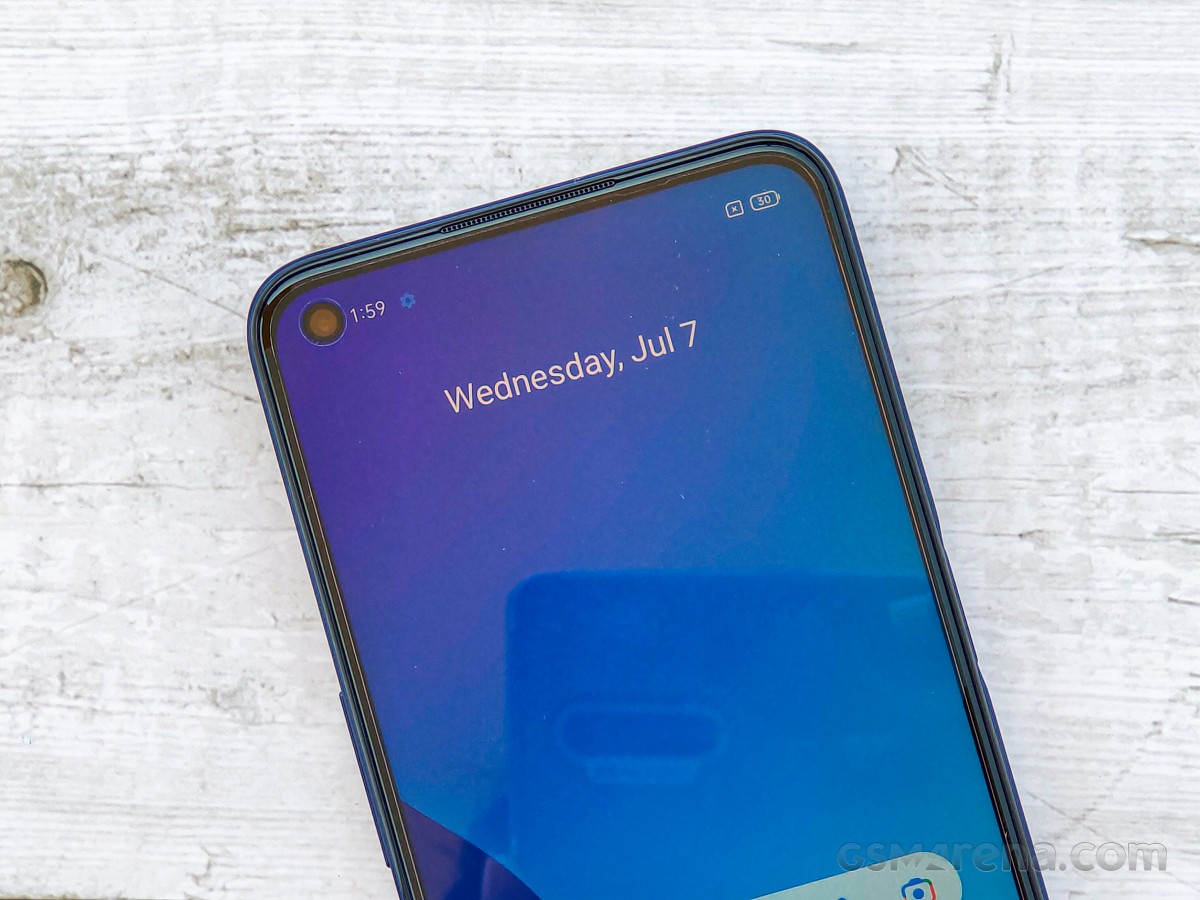 The panel supports a 90Hz refresh rate, and the software offers three modes - 60Hz, 90Hz, and Auto Select. There's little to say about the 60Hz mode - the phone remains at that refresh rate in all apps and use cases.

The 90Hz mode will give you the high refresh rate across the UI and in nearly all apps, as long as you're swiping on the display and will quickly switch down to 60Hz when idle.

Auto Select, on the other hand, will generally maintain the above behavior, but it will directly switch to 60Hz for certain apps, regardless of activity (Quora, Google Photos, the GSMArena app). YouTube, meanwhile, will be stuck at 60Hz regardless of mode. 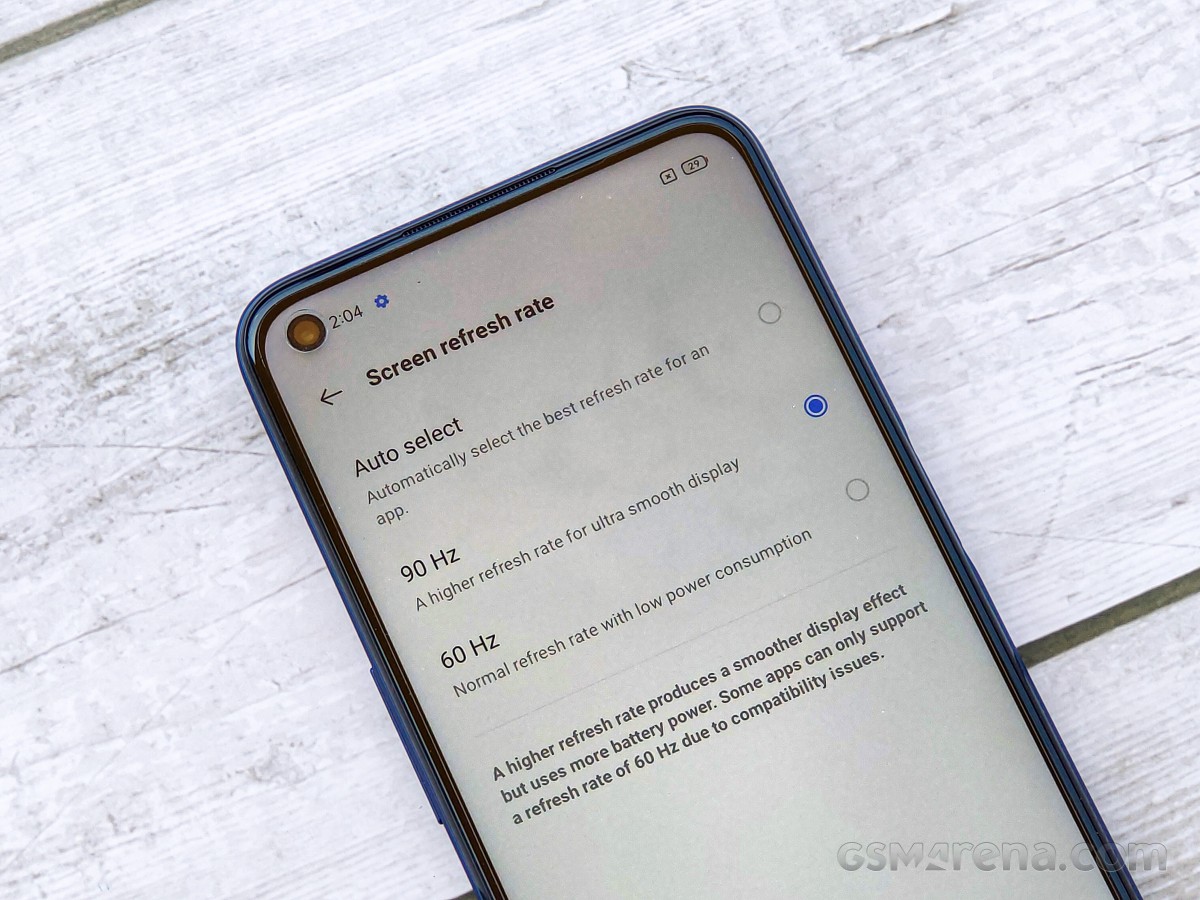 The display does not have HDR support, but the phone does have Widevine L1 certification, so it will play FullHD content in Netflix and Amazon Prime Video.

Is the full Review coming out sometime?

Dimensity 800, 120 hz display, 8MP Ultrawide camera, 4K Video record, Fast Charging 30W, NFC, those looks better BUT, there will be no more mayor updates for him for now maybe I'm wrong by the updates. But is a more powerful phone in all.