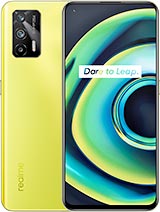 Anonymous, 30 Sep 2021A "Pro" model without NFC. ....okayIt's obviously meant for the Chinese market so why would it have NFC ?

Can someone tell me if spanish si available in this phone?

Carbss, 25 Sep 2021Can this phone play games that are graphically demanding? I... moreYes, I played COD Mobile and this can go the highest settings possible for both graphics and FPS. I can also run Genshin with highest settings and 60 FPS but it needs to have a cooler at the back (model is K4A, if you'll ask the model). Temps while playing it is hovering around 44-48°C with the cooler. But GI sucks battery power so hard though, I can "only" play for around 2.5 hours from 100% to 5%.

Can this phone play games that are graphically demanding? I want to play games at a stable fps at a reasonable graphic level.

Lord, 25 Aug 2021Realme gt neo is better performance if you are gamerWow, can you not be a jerk for the person's purchase? No, GT Neo is not a better purchase especially for a gamer because the Q3's Dimensity 1100 and GT Neo's 1200 literally has the same GPU. The only thing that's different between the two is the 1200 has a slightly higher clock on one of it's cores, resulting in around a 10% performance increase (which is not noticeable IRL BTW).

Is this phone has gorilla glass protection?

Coconut, 23 Aug 2021Guys does this phone has 3.5mm jack? This site says it has ... moreit should have card slot & display protection

Best purchase i ever made for a smartphone at this price range.

I got the Firefly color variant. It is really cool and the Slogan is subtle.
It also has a matte finish and doesnt feel cheap.

I am so satisfied with my purchase.

Guys does this phone has 3.5mm jack? This site says it has but some i visited tells it doesn't so I'm kinda confused. And is this good enough for graphically intensive games? I prefer to play games at 45-50 fps if the graphics is set to high or highest whichever is available.

My experience, 06 Aug 2021When the phone is new, RealmeUI is better because it is lig... moreVery good mobile

XICOR111, 16 Jul 2021is realme ui better or xiaomi miui or poc0 osWhen the phone is new, RealmeUI is better because it is lighter. But after some time like 6 months in use, RealmeUI performance will degrade and become slower. Realme is not that fast at fixing bugs too, and there is chance new bugs will be introduced with each update.

This phone has the exact same camera and display as GT and Neo
This phone dose not have HD BT (greyd out in dev options)
you can add Vram to this with realme update +5GB
120HZ in GUI and limited apps, fits same cases as GT and Neo
Hope that helps

is realme ui better or xiaomi miui or poc0 os