Realme unveiled a whole ecosystem with the introduction of MagDart. It is primarily a system to charge your phone, but it does enable some other features as well. You may have heard about the Realme Flash phone, but that is just a concept device used to demo the system.

Instead, the first phone that users will be able to charge with MagDart is one you may already have – the Realme GT. The company will release a case that adds wireless charging to the GT (which it doesn’t have natively), specifically the new magnetic system. This also means that similar cases can be launched for other models.

MagDart case for the Realme GT

The case for the GT sticks with the sporty aesthetic, it is a carbon bumper case with a built-in MagDart module. The cool thing is that it still leaves you with a fully-functioning USB-C port, so you can charge the phone with a cable or transfer some data. Okay, what can MagDart do for you?

Well, it can charge your phone fast or faster. The hefty adapter you may have seen in leaks is the 50W MagDart charger – the fastest magnetic wireless charger for phones in the world. A 4,500 mAh battery (like in the Flash concept phone and the Realme GT) can be fully charged in under an hour, almost as fast as using a wired 50W SuperDart charger.

A built-in fan keeps both the charger and the phone running cool while the charging occurs. But this charger is not ideal to lug around while traveling, for example.

This is why Realme also unveiled the 15W MagDart charger. The charging pad measures only 3.9 mm, thinner than Apple’s MagSafe. To pull this off, Realme had to be clever with the design and move most of the circuitry closer to the other end of the USB cable, leaving only the coil on the other end.

The MagDart 15W is small, thin and easy to cary

Even though it tops out at 15W, MagDart can fully charge an Android phone with a 4,500 mAh battery in 90 minutes. For comparison with Apple’s system (which also runs at 15W), in our testing we found that the 3,687 mAh battery of an iPhone 12 Pro Max takes three full hours for a complete charge, suggesting that charging gets throttled much sooner than with Realme’s MagDart.

There’s another wireless MagDart charger – this one looks like the stand type, but is actually a 2-in-1 system. The part that supports the phone is a power bank that detaches from the base and can be used to top up your phone on the go.

Realme paid attention to the design and made it fairly attractive with a vegan leather and aluminum. Of course, the magnets of the MagDart system can keep the battery attached while you use the phone.

The company unveiled even more products in the MagDart ecosystem. The MagDart Beauty Light is a case that has a flip up ring light. It has no battery of its own, instead it is powered by the phone using reverse wireless charging. The flash has 60 LEDs and you can control both the brightness and the color temperature.

Yet another accessory is the MagDart Wallet. Like the power bank, this one is made out of vegan leather and aluminum. It can hold three credit cards and has a built-in kickstand, which can prop up the phone while you watch a movie or hop into a video call.

It's not yet clear when the MagDart accessories will be available or how much they will cost. We will let you know as soon as we do. Before we go, here's a summary of all the MagDart products that Realme unveiled today: 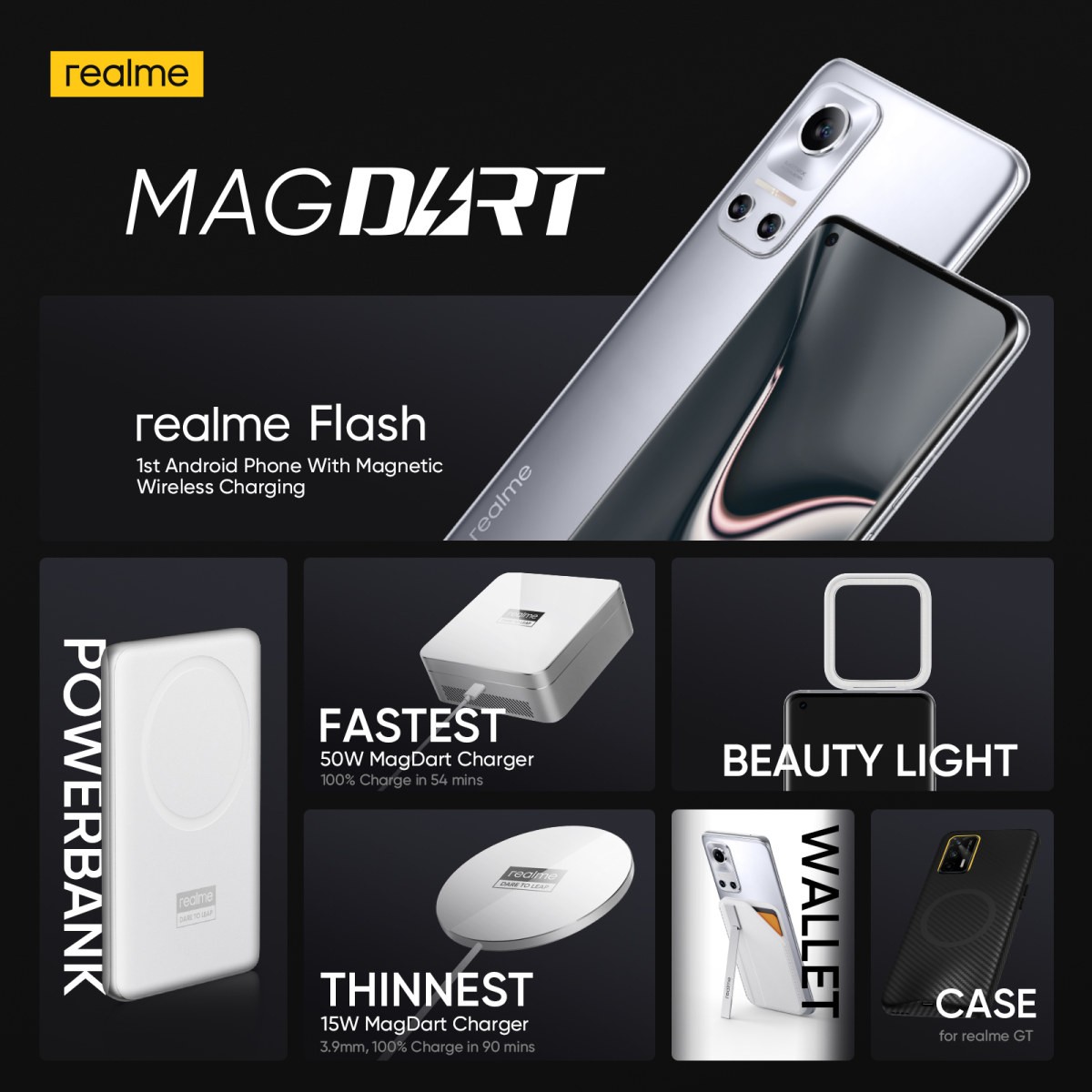 This magsafe magdart is just a lowly gimmick.. No need for wireless actually.. since it already have magnetic alignment just put a pogo pin and u get full wired charging speed without the heft of wireless coil (facepalm).. U also lose the wireless ad...