Realme often has us wondering what's what in its portfolio and where new models fit in the existing lineup. It's a bit more of that now with the X3 SuperZoom - is it an X2 Pro successor, or does it replace the plain X2 while an X3 Pro is planned for the near future? Or is it an interim model to bridge the time gap while a pair of X4s are getting put together? Or maybe it's a step to the side of the X2s, but since it comes out some 7 months after them, Realme felt the need to bump the number? We'll try to find the X3 SuperZoom's place under the sun as we move along with this review.

Let's start with that SuperZoom bit. The moniker is inspired by the phone's telephoto camera, and it's the five times zoom periscope lens setting it apart from all other Realmes - the few of which have a tele cam at all, stick to a standard 2x unit. A standout feature warrants a standout moniker then.

Does zooming out count for SuperZoom? Perhaps they didn't mean it that way, but the handset still comes with a couple of front-facing cameras, one of them ultra-wide. It's not a first for Realme, with both the cheaper 6 Pro and the pricier X50 Pro having a second selfie shooter, but it's not hurting the X3 either.

They couldn't have called it the X3 SuperZoom LCD, could they? While the periscope makes the phone unique in the Realme roster, the non-OLED display does make the SuperZoom stick out among all the other Xs, not necessarily in a good way. OLEDs do have their critics, however, and they'll be pleased to learn that this Realme's LCD is 120Hz-capable - we'll talk more about that later.

Alongside the display panel, another decision that has budgeting and market segmentation written all over it is the choice of chipset - last year's Snapdragon 855+ comes in cheaper than the current 865 and leaves enough ground to justify the X50 Pro's price premium while being plenty powerful still. 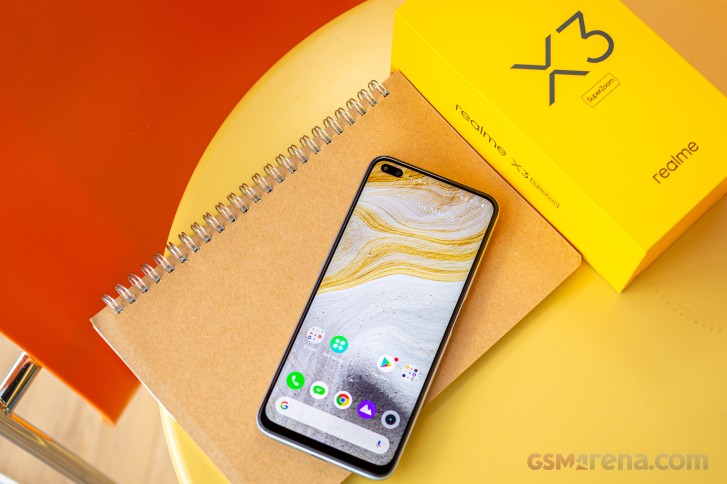 Here's what the rest of the key specs look like.

Perhaps you'll notice some other peculiarities in the above list. The X3 SuperZoom doesn't have a memory card slot, while the vanilla X2 did have one, but not the X2 Pro or the X50 Pro. It's not a Pro thing either - the 6 Pro lower in the lineup does have the feature.

Speaking of, much like the 6 Pro, the SuperZoom only has a single speaker - the higher-ranked Xs have stereo setups. Only 30W charging support has made the cut too, while faster versions come with the X2 Pro and the X50 Pro, though 30 isn't half bad in this context.

The X3 SuperZoom arrives in the same immediately recognizable yellow box as the last batch of Realmes we've had in for review recently. The contents are in line with what we've come to expect, too.

You get a 30-watt fast charger that Realme calls Dart and a cable to go with it - you need both pieces to charge the SuperZoom quickly as they have proprietary wiring. Additionally, Realme is bundling a soft silicone case for protection. There are no headphones in the box.