Realme has a thing for this segmented, "two-tone" design for its back panels lately. The X7 Max 5G is no exception. The "DARE TO LEAP" slogan is also present, which is a naturally polarizing aspect of the design. However, compared to, say the Realme 8 and its back, the Realme X7 Max 5G's back design is markedly "tamer". The text is a lot smaller and also less, for that matter, with our unit lacking the CE markings. 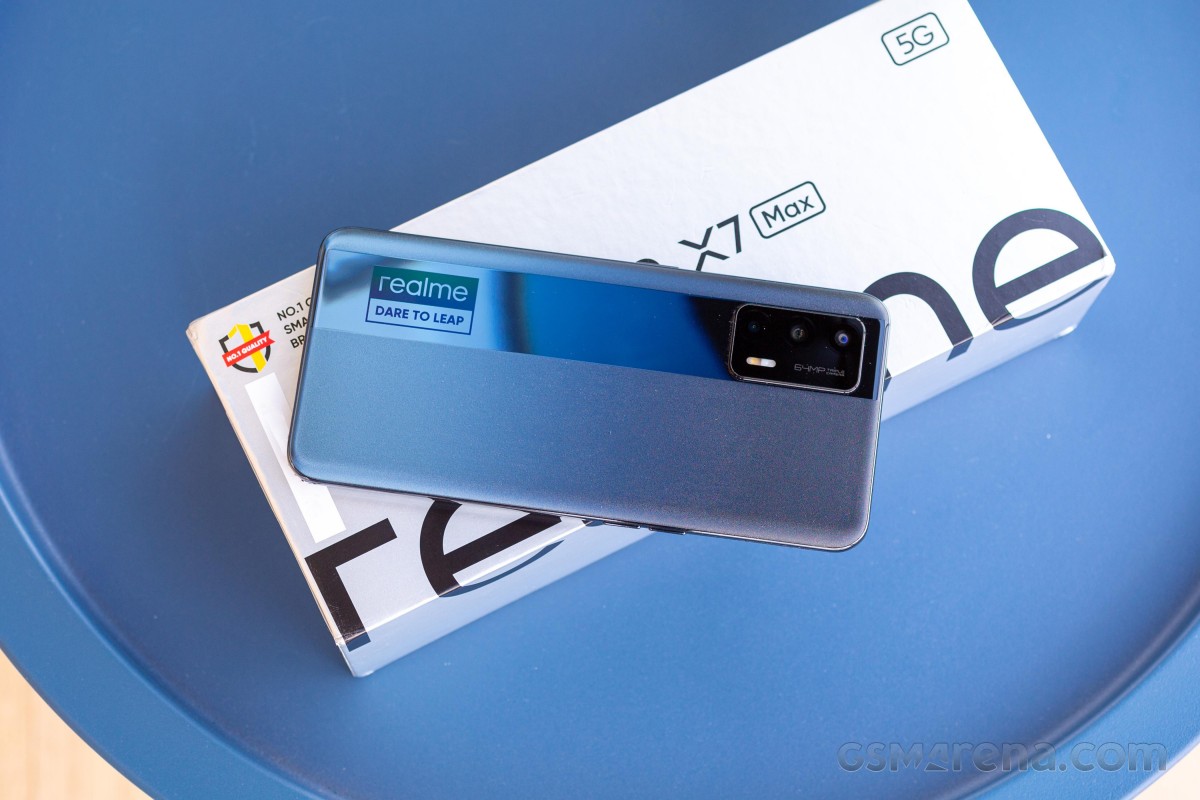 In terms of the look and feel of the finish on the back, the Realme X7 Max takes some inspiration from other Realme designs like the Realme 8 we already mentioned, as well as the Realme 8 Pro. The main part of the panel has a fine "sand-blasted" finish to it, similar to the Realme 8 Pro. The strip is a lot glossier and akin to that on the Realme 8. Though, it doesn't have nearly as strong of a rainbow reflection effect to it. We count that as an overall positive in our mind, since it contributes to the less flashy overall nature of the design. Though, this is not necessarily a universal point. Many Realme devices tend to target a young demographic likely to appreciate a more eye-catching look. 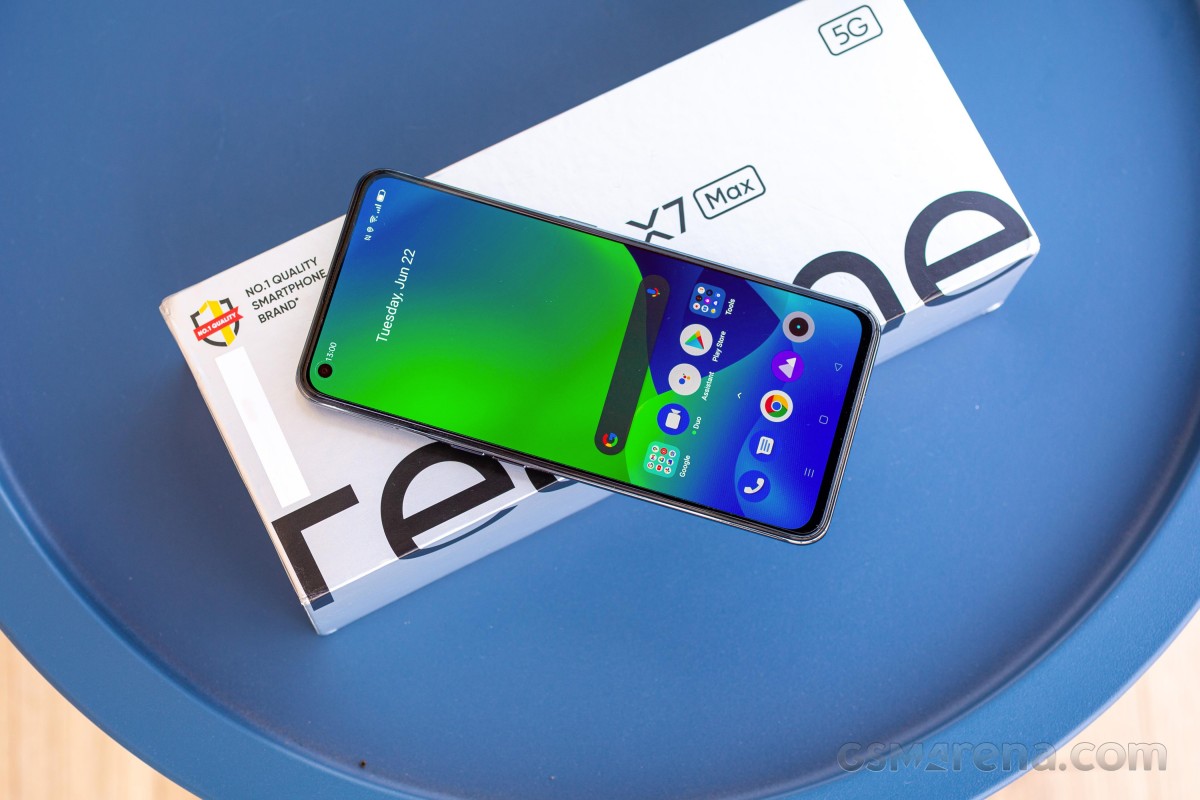 Regardless of your standing on the look, you will, unfortunately, find that both surfaces on the back of the phone are hard to keep clean. The texture of the main surface gathers dust and skin flakes easily. This is particularly noticeable on our Asteroid Black unit. We imagine the Mercury Silver and Milky Way variants will show less dirt overall. To Realme's credit, though, the surface is nice and grippy. 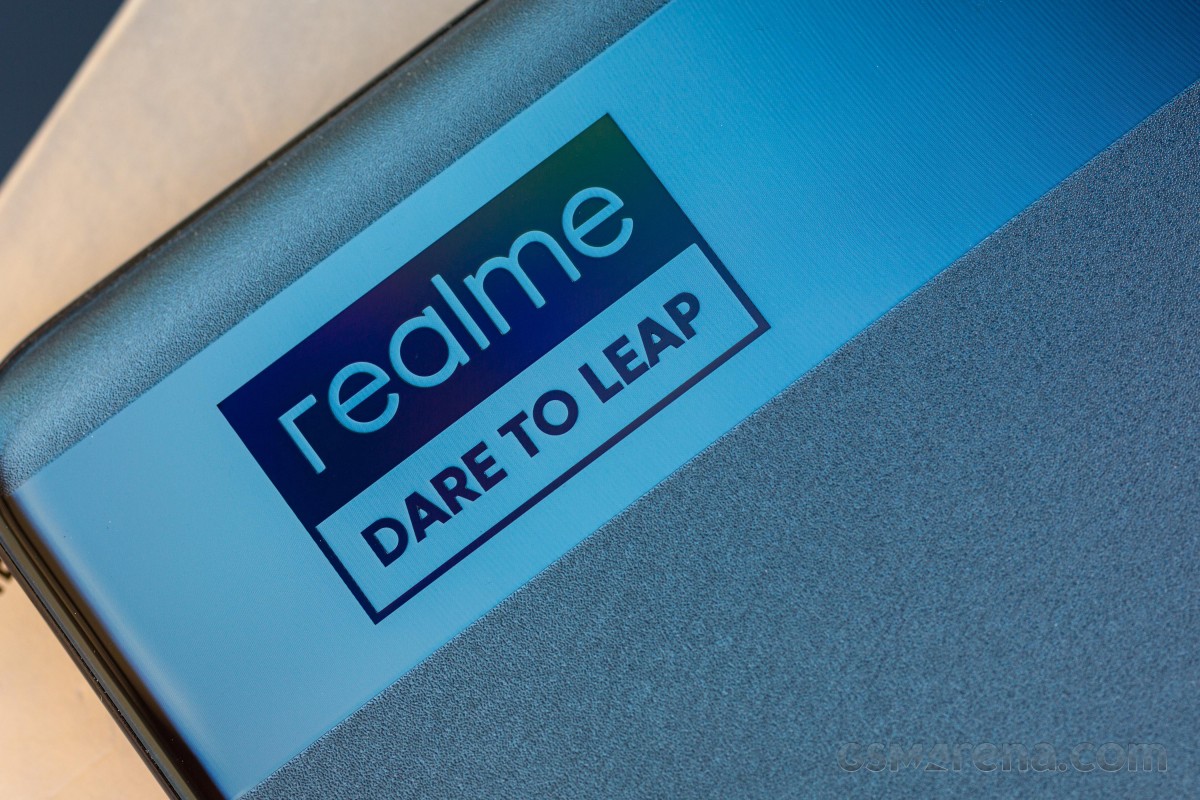 In contrast, the accent strip is very shiny and polished. It's where all of your finger grease and fingerprints end up. Since the Realme X7 Max 5G lacks any formal ingress protection rating and just advertises splash protection, we were also quite hesitant to clean it with water. Frankly, having experienced the flagship eco leather back on the vanilla Realme GT, we found ourselves missing the option on the Realme X7 Max 5G. 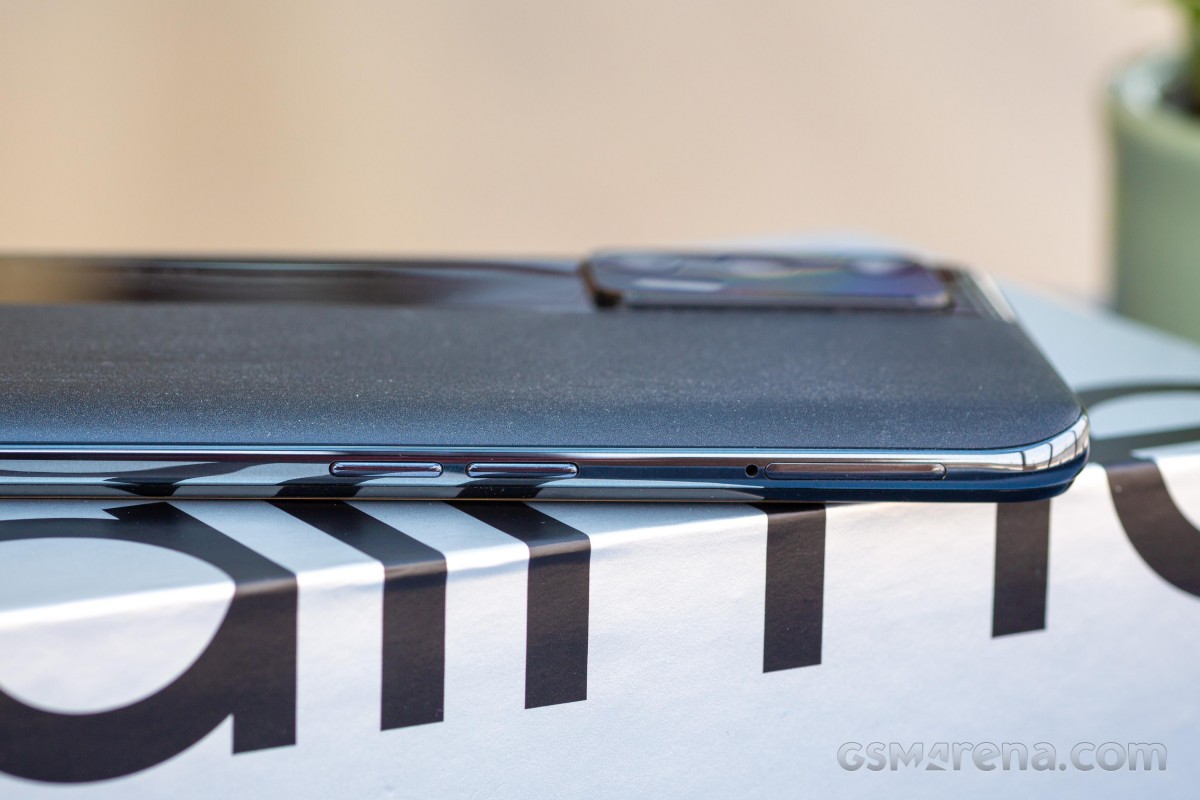 Speaking of materials, the Realme X7 Max 5G relies heavily on plastics. Both the middle frame and the back panel are plastic. Realme says it used high-density polycarbonate to keep weight down. The overall build on the phone feels solid, with little to no flex. The phone is also filled up nicely on the inside and feels dense. Yet, in part due to the plastics and in part because of the relatively tame 4,500mAh battery capacity, it is on the lighter side, especially for a 5G phone at 179 grams.

Unlike the Realme GT Neo, the specs sheet on the X7 Max 5G is a lot more forthcoming when it comes to materials and specifically describes Dragontrail Glass for the front of the phone. We'll take the extra peace of mind any day of the week over wondering if there is just plastic protecting the display. That being said, the oleophobic coating on offer here is not stellar and there is a fair bit of resistance when scrolling. Not experience-breaking, but noticeable. 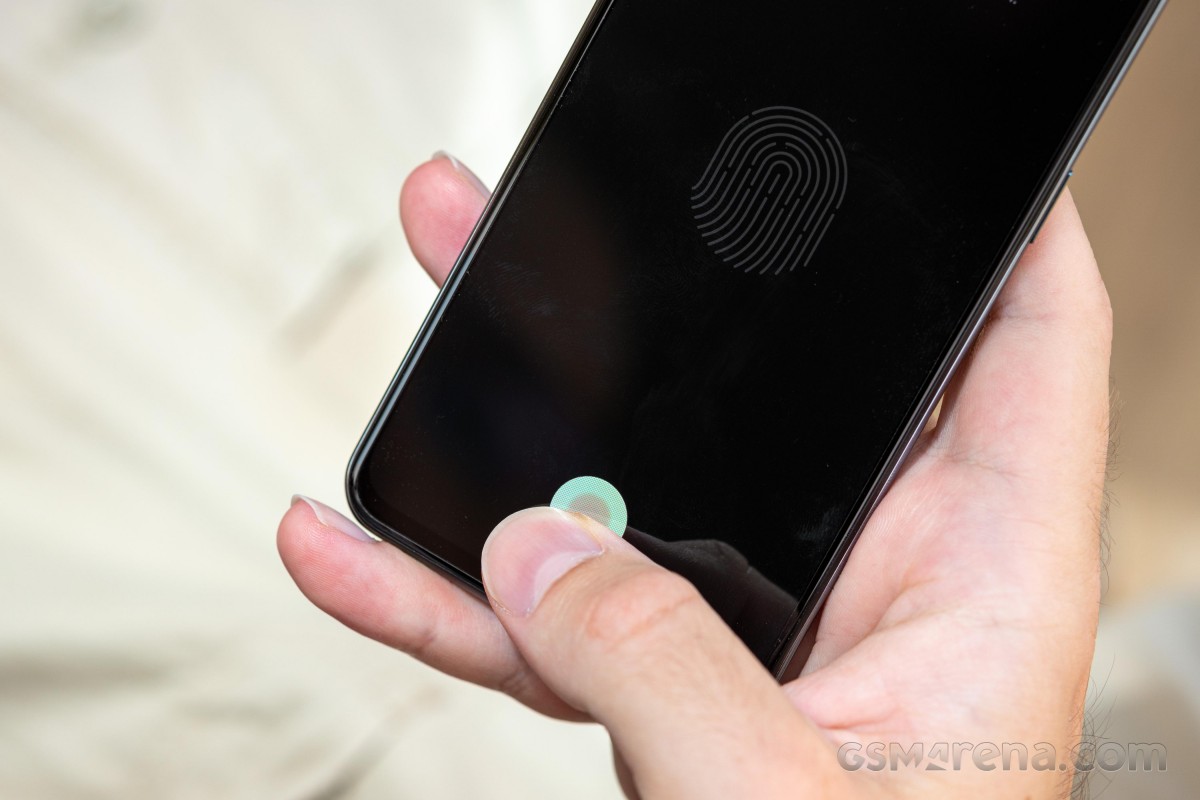 Speaking of the front of the Realme X7 Max 5G, it has a fairly modern design, as does the rest of the phone. Bezels are reasonably small and so is the punch hole for the selfie cam. Not exactly flagship-grade, but then again, the X7 Max 5G is sort of in "flagship-killer" territory. In any case, Realme still found enough space to fit a bottom-firing main speaker, as well as an amplified earpiece on top of the display for its stereo setup.

In no particular order, a couple of other bits we like about the design of the X7 Max 5G include the relatively small height of the camera island. Also, the nifty color accent on the power button.

Speaking of buttons, we have no complaints regarding the ones on the X7 Max 5G. The power button on the right side, as well as the volume ones on the left, are nicely positioned height-wise and offer good tactile feedback. 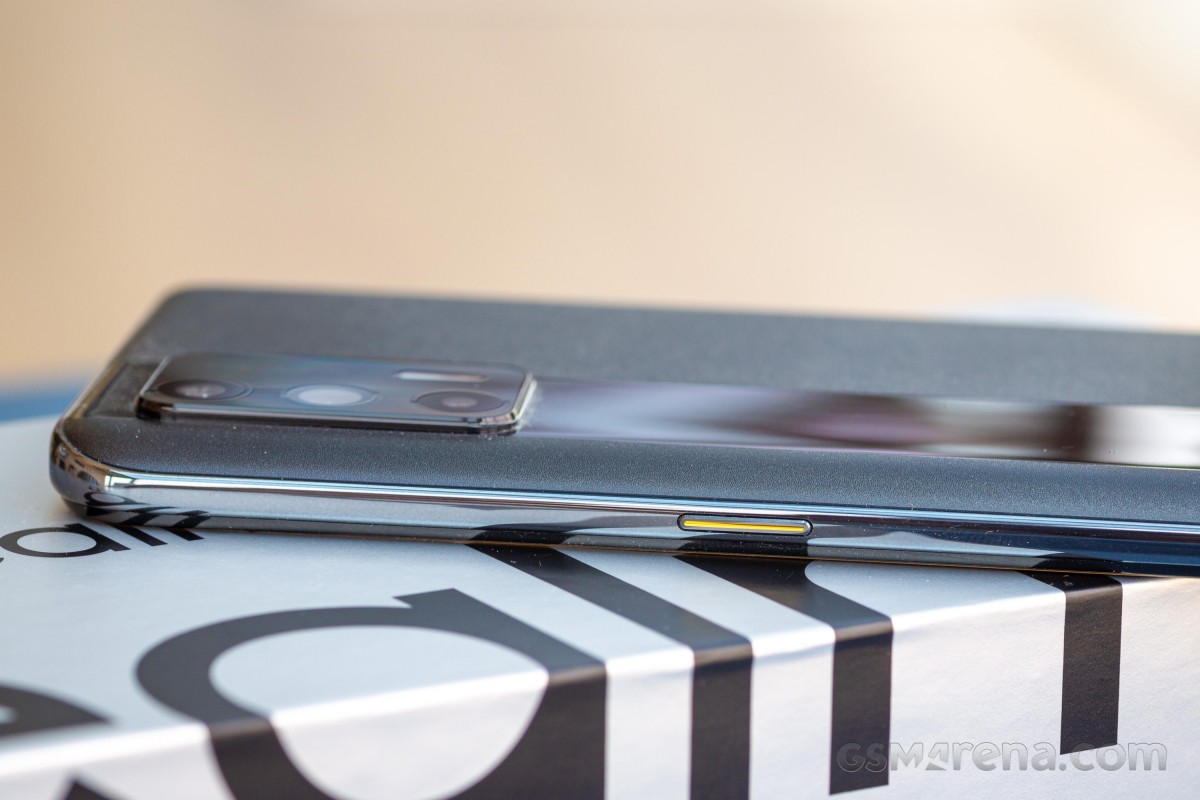 The SIM tray sits above the volume buttons. It can hold two Nano-SIM cards, but lacks support for microSD. The top bezel is mostly empty, except for the secondary microphone. 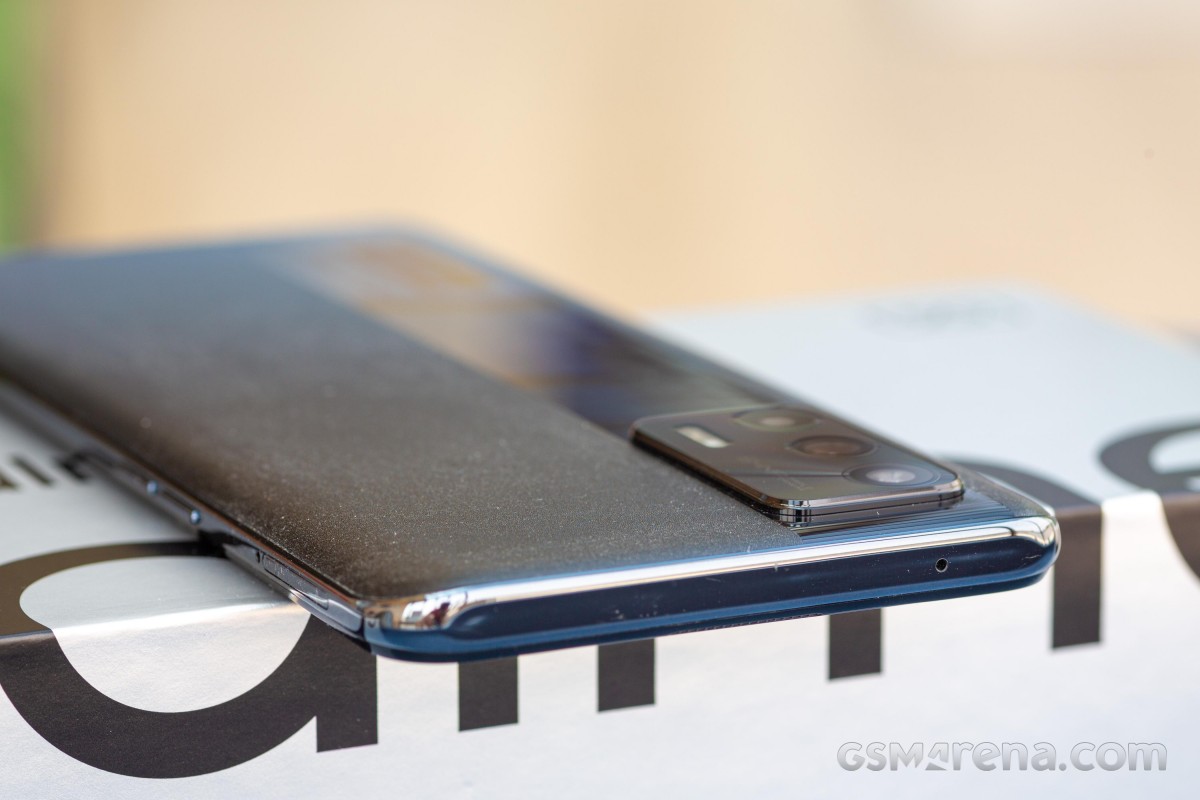 In contrast, the bottom is quite busy. You get the Type-C port in the middle, which has a USB 2.0 controller behind it, with OTG support. Next to that - the main microphone and then the trusty, old 3.5mm audio jack. Realme advertises 24-bit/192kHz audio output from that jack, as well as Dolby Atmos support. On the other side - the main bottom-firing speaker. The second channel of the stereo setup is handled by the amplified earpiece above the display. 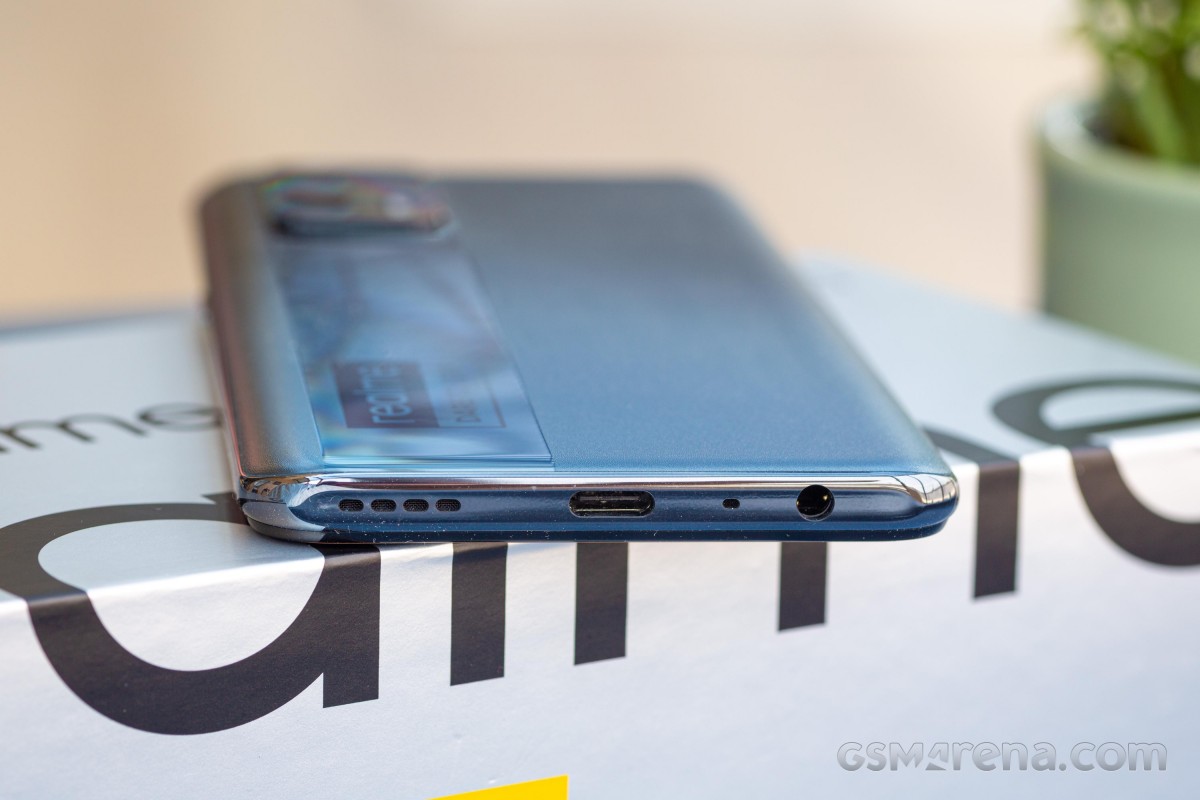 The X7 Max 5G has an under-display fingerprint reader. It is a standard optical one and one of the speediest and most accurate out there. Pretty typical for Realme phones. One thing we did notice is that at times the reader refuses to trigger when the display is off and the phone is on a surface. Likely the phone lacks sensor inputs to properly wake it up. 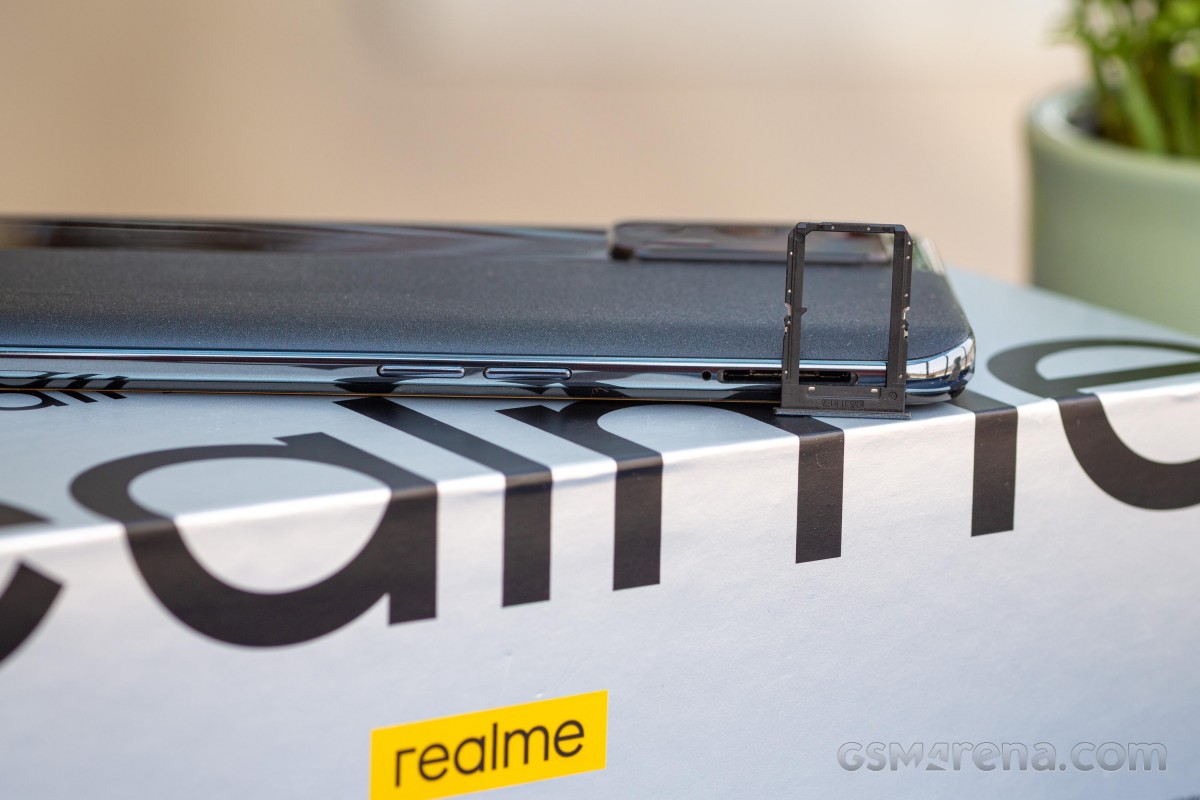 Even when that happens, however, all it takes is a second try to get it to work p no big deal. You can also use the fingerprint reader for the App lock and Private Safe features built into the OS.

No, Realme capped all games at 60Hz. You can read about it in the Conclusion.