The Redmi K30 coming on December 10 will be powered by the freshly announced Snapdragon 765G SoC, which is the GPU-boosted variant of the Snapdragon 765 chipset.

Qualcomm is yet to detail the Snapdragon 765G SoC, but we know it will come with the Snapdragon X52 multi-mode 5G modem integration, offering download speeds up to 3.7 Gbps. 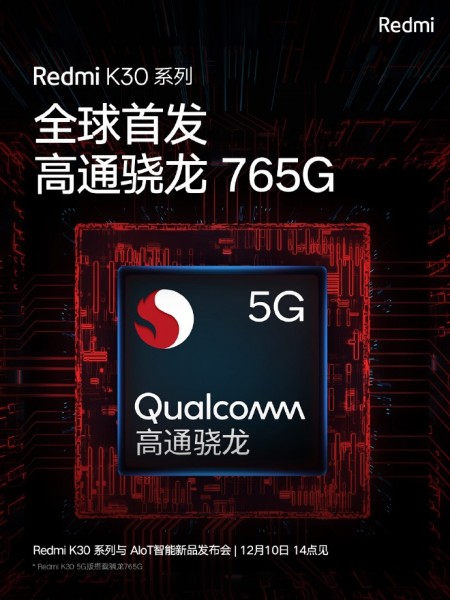 The company also posted an image on Weibo confirming the Redmi K30 will boast a 6.67" display with a 4.38mm long cutout in the top-right corner for the dual selfie camera.

Additionally, the company confirmed that the back of the Redmi K30 will be made of frosted glass, and there's also text on the left side of the cameras confirming the phone will come with a 64MP main camera, which according to an industry tipster is the Sony IMX686 paired with 8MP, 5MP, and 2MP modules. 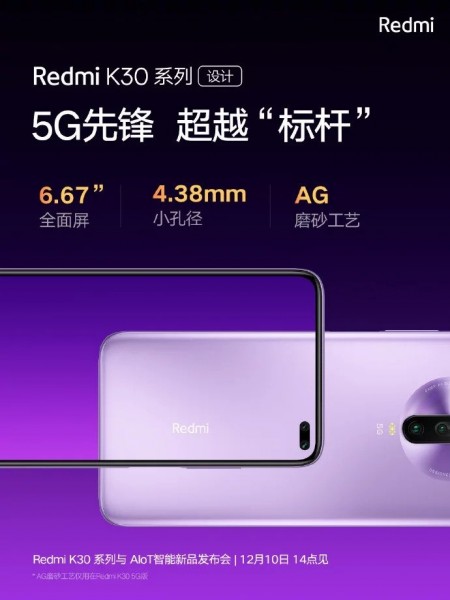 Redmi also shared a promo video of the Redmi K30. You can check it out below.

We don't have the official full specs sheet of the Redmi K30 yet, but the company has already confirmed that it will come with a punch-hole display, a side-mounted fingerprint reader, and a total of six cameras - two on the front and four at the back.

The smartphone's officially confirmed to come in a purple shade, but a live image that has surfaced reveals the phone will also be offered in a red gradient. Is this the price of having a 5G chip? All I want is an OIS for the main cam and instead they added not 1 but 2 depth camera which frankly is just wasting money. They pick LCD, probably because they want that headline grabbing 120Hz display, which ag...