Xiaomi sub-brand Redmi will soon get its own Snapdragon 888 powered device with the launch of the upcoming K40 lineup. The top device in the new series likely called Redmi K40 Pro will sport the Snapdragon 888 chipset as Redmi GM Lu Weibing took to Weibo to reveal some of the key specs for the K40 series. 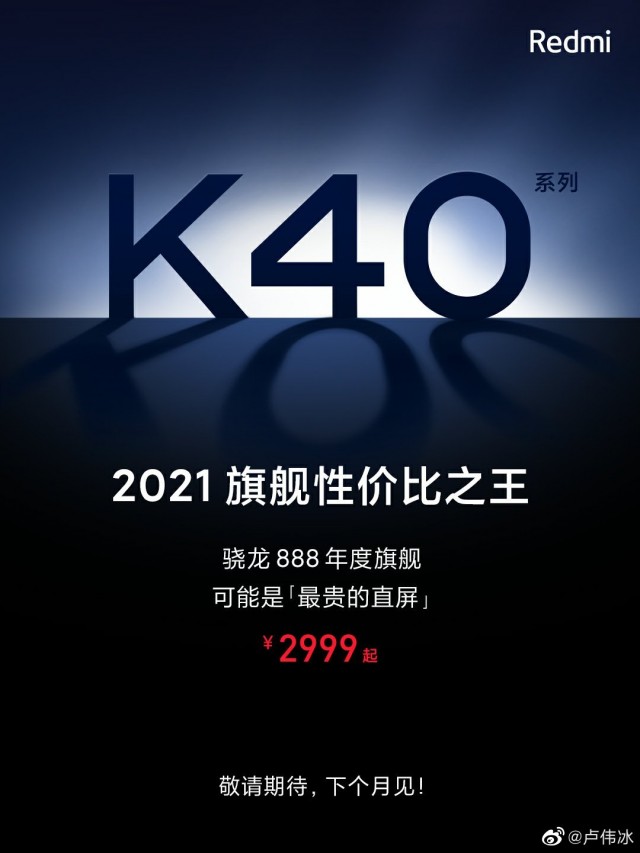 Like last year’s K30 Pro, this year’s marquee K40 model will pack Qualcomm’s latest flagship chipset– the Snapdragon 888. It will be coupled with a flat display which is touted as “the most expensive flat screen” though we’re not completely sure what this entails. Based on previous rumors, all K40 series phone will come with high refresh rate screens but we don’t yet know if it will be an LCD or AMOLED panel.

We also get confirmation the battery on the premium K40 will be larger than 4,000mAh even though we don’t have an actual capacity. Previous leaks suggested 33W fast wired charging support. Lastly, the Snapdragon 888 powered Redmi K40 will launch for CNY 2,999 in China which equals to about $463. We should be hearing more official details on the Redmi K40 series soon so stay tuned.

Xiaomi Redmi K40 surfaces in a set of live images

The Redmi K40 will be a 5G phone, MIIT listing confirms

I bought the K20 pro in August 2019. I got a killer deal and bought it brand new from China for $300 USD. That said, I'm not digging this price of $465 USD for not a huge upgrade and a punch hole camera. I'll likely be skipping this and wai...

It's not going to have any stupid holes just like k20 and k30 right? Right???