TENAA published details of a new Xiaomi phone – model number 21091116AC – and now the first Geekbench result is out. Is this the Redmi Note 11? The Poco M4 Pro? The model number has been associated with both, but we’ll get to that. 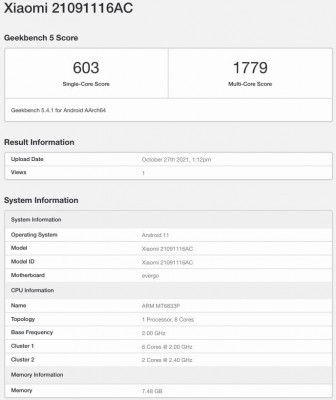 The phone was equipped with 8GB of RAM, only one of the many possible configurations listed on TENAA (though the FCC only tested 4/64 GB and 8/128 GB). Additional details include a 6.6” display, 4,900 mAh battery with 33W charging and a 16 MP camera. Though we’ve seen rumors of a 50 MP camera about the M4 Pro.

Okay, what’s going on? The 21091116AC was identified as the vanilla Redmi Note 11 by Digital Chat Station. However, other leaks have named this model number as the Poco M4 Pro. There’s no reason both can’t be true – for example, the Poco M3 Pro 5G is basically the same phone as the Redmi Note 10 5G, save for difference in the exterior and the memory configuration.

A related device – the 21091116AG – will definitely be marketed as the Poco M4 Pro 5G in some regions. The G should stand for “global” while “C” is for China and Xiaomi often uses different model names for the domestic and foreign markets, which may be what is causing the confusion. Also, according to DCS the data listed on TENAA is not 100% accurate, which could explain some discrepancies (e.g. the camera). 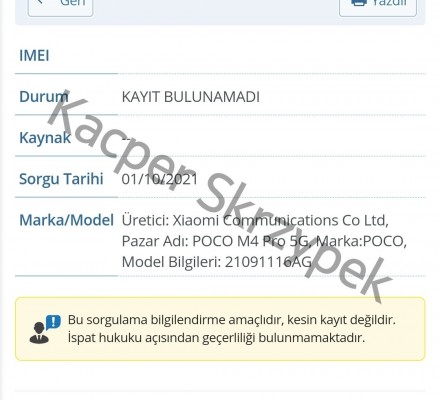 The Redmi Note 11 series is getting unveiled tomorrow, which will hopefully clear up some of the confusion. The Poco M4 Pro is expected in early November.

Poco M4 Pro 5G will be announced by early November

Xiaomi Poco M4 pops up on FCC, the launch date could be close

I didn't know this , learned something today I always just looked at the name of the cores and just say well this must be better

that's the only reason that Xiaomi is moving toward MediaTek: they can get a better chip for the same or even less cost. if it wasn't for that; Xiaomi would go for SnapDragon.