Redmi Note 7 Pro to be announced next week

The Redmi Note 7 is arriving next week in India, but many fans are waiting for the Pro variant of the hit smartphone. The Redmi CEO finally confirmed on Weibo the device is still coming next week with a 48 MP camera, but this time the sensor will be Sony IMX586 rather than the GM1 by Samsung. 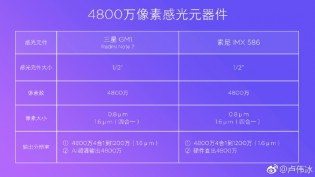 The upcoming phone is expected to upgrade the chipset to Snapdragon 670 or 675. We also think it might have a fingerprint scanner under the display, but images released by the company CEO Lu Weibing see a sensor on the back panel. Other rumors point to 6 GB RAM and 128 GB storage.

Our Xiaomi Redmi Note 7 video review is now up

samsung trying to survive i think

At last, it's worth the wait. With sony imx sensors, it's the best buy for a budget. I refrain buying RN7 because i waited the RN7 Pro.