According to a new report out of Samsung's home country of South Korea, the company is aiming to sell around 60 million units of its upcoming Galaxy S flagship smartphone (likely to be called the Galaxy S8) in 2017.

"The tech giant has requested its partners to supply (parts) based on the tech giant’s 60 million shipment goal," the report quotes industry sources as saying. 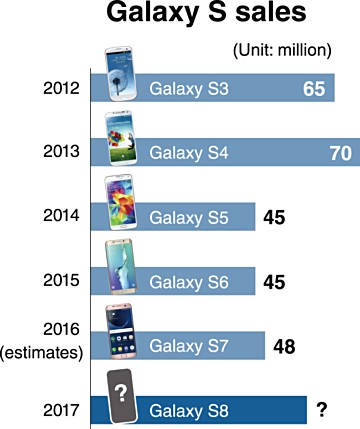 The report also notes that the Galaxy S8 will be launched sometime in April (which is inline with what we've been hearing recently), adding that the mass production of the device will begin a month prior - in March.

Changing the background and icons is one but a small part of customising on Android, you cannot even do that on an IOS machine!It is a common misconception of IOS fans that customization is tinkering with backgrounds and icons, but of course they spe...

Agree with you up to the S6. I upgraded from the S3 to the S6edge and the difference both in performance and build quality was there for all to see. Still using it and awaiting to see what the GS8edge has to offer.

They can't sleep at the same price as in the US they need to pay for patents and also the US government does not want Chinese manufacturers to sell in their country as they think it will be used for spying...