The smartphone image sensor market grew to $15 billion last year, up 13% year over year, according to data by Strategy Analytics. This is despite an 8.8% decrease in smartphone shipments compared to 2019.

Sony remains the market leader with a 46% share. The company improved its numbers compared to the first half of 2020 when it had a 44% share. However, its dominance continues to be challenged by Samsung. 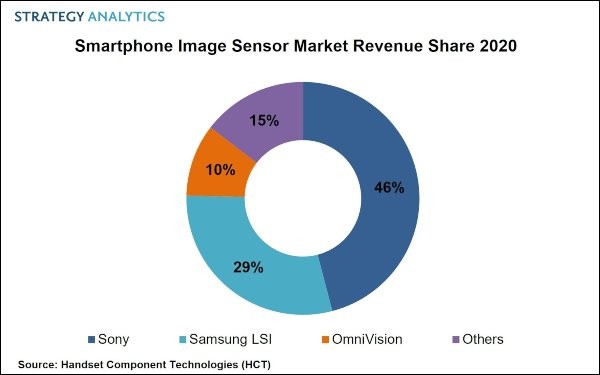 Sony suffered collateral damage as it is a key supplier to Huawei, whose shipments fell sharply last year (the company dropped out of the Top 5, the split with Honor didn’t help the situation). The analysts predict that Sony’s position will be increasingly under threat by its rivals.

Last year smartphones had a higher camera count on average with higher resolution sensors to boot. However, while the pandemic didn’t decrease demand for sensors, SA warns that the global semiconductor shortage could cause issues.

“The demand momentum for smartphone CIS, driven by the expansion of multiple cameras and superior photography capabilities in smartphones, will propel the image sensor market growth. However, the semiconductor shortages could create challenges in meeting the CIS demand,” said Stephen Entwistle, Vice President of the Strategic Technologies Practice at Strategy Analytics.

Agreed, Samsung sensor's are real shit. Those points that you have mentioned on image quality of Samsung's sensor is utterly true and I can confirm it, as I currently am using a phone that uses Samsung's Isocell HM2 sensor. Sony is S...

I currently am using a phone that uses Samsung's Isocell HM2 sensor which is a utter shit sensor and I can confirm it.

"Other brands are way ahead of Sony." - that is not fact. In some areas they are ahead, in some not. So it still sounds childish. Almost no one offers RAW support for all 3 (or 4) lenses. Most just offer it for the main lens. And yes...