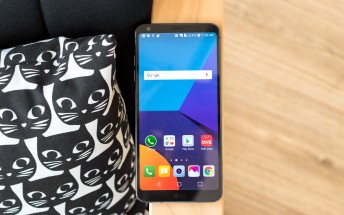 Back in April a report surfaced claiming that LG was working on a G6 Mini smartphone, though it did stress that wasn't a confirmed name. Today famous leakster Evan Blass (a.k.a. @evleaks) has revealed this handset's actual commercial moniker.

It will allegedly be called LG Q6 when it launches. Its model number is M700, and it's already hit the FCC certification process. The Q6 will come with a 5.4-inch 18:9 touchscreen, which is smaller than the G6's 5.7-inch panel but keeps the 'tall' aspect ratio. The Q6 will apparently have a screen-to-body ratio of "just under 80%". For reference, the G6 scores 78.6% in that area.

There will be a single 13 MP camera on the back, and only 3GB of RAM inside, compared to the G6's dual cam arrangement and 4GB of memory. Other specs haven't leaked yet, unfortunately, so there's no telling if LG will use the same Snapdragon 821 chipset that's in the G6 or opt for a mid-range part.

0.3", although not significant, will make a big difference in handling. Check the Z3 compact 4.6 vs they Z3 5", for example. Also, if the screen to body ratio remain slightly under 80, then they are slimming the Bezels a bit. I really hope the...

if LG do, you won't buy it either