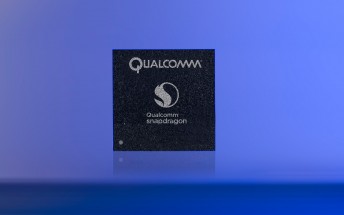 Qualcomm should announce the Snapdragon 845 chipset by the end of the year but some unconfirmed info is making the rounds.

The new flagship chip will be built on a 10nm Low Power Early process (from TSMC rather than Samsung). So we cant expect performance gains due to the process.

Gains will be had, however, as new chip will use 3rd gen Kryo cores  four of them, based on Cortex-A75. Those will be paired with four A55 cores for efficiency. The graphics will be upgraded to Adreno 630, though little is known about it beyond further AR and VR optimizations.

The Snapdragon 845 will allegedly support dual cameras up to 25MP both on the front and back (four total). No word on 2160p @ 60fps video recording, however.

The new X20 modem will push theoretical download speeds up to 1.2Gbps, up from the 1Gbps speeds we saw demoed earlier this year with the 835 chip (X16 modem).

Makers are already lining up for the Snapdragon 845. Samsung reportedly bought up the initial supply for the Galaxy S9 (and will also use the 10nm Low Power Plus for Exynos 9810). Xiaomi also wants to use the new chip in the Mi 7. LG may adopt a two-tier approach with both Snapdragon 845 and 835.

Qualcomm likely to announce the Snapdragon 845 in early December

It *has* stagnated. 2 latest generation of phones *same* single core performance: http://www.androidpolice.com/2017/03/22/qualcomm­­-snapdragon-835-first-benchmark-results-com­paris­ons-pixel-oneplus-3t-galaxy-s7/ If you go further back it's actua...

You asking the wrong person.I would prefer to have Apple A chipset power than battery life, you still have to charge your phone almost everyday, does not matter which brand or phone you use, so better more power than battery in this case. You right a...

In all honesty the 835 is a beat of a chipset, there is literally nothing it cannot deal with. Not only that but it remains extremely cool during all of this and lastly it's stamina is unbelievable. If the 845 can improve on any of this the...