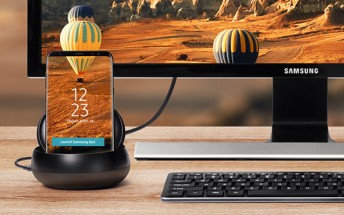 Samsung multimedia docks allowed you to hook up a large screen and accessories up to your flagship Galaxy device, but the Android UI just didnt cut it. After a lull, Galaxy docks are back - meet the Samsung DeX.

The dock looks like a puck and is reasonably portable. The top tilts to hold your phone at an angle. DeX features a full-sized HDMI port, two USB 2.0 ports plus a USB-C for charging. It lets you use the biometric authentication on the S8 to log in.

Its really the software that makes the whole thing impressive. When you plug in a Samsung Galaxy S8 you get a completely custom desktop interface, rather than a stretched out Android UI. You can run multiple apps in resizable windows, just like on a PC.

Samsung has partnered with multiple companies to bring better software. Adobe contributed Lightroom, so that you can edit those RAW photos with the convenience of a large screen and keyboard/mouse controls.

You can get a full-blown Windows too - well, a virtual one, anyway. A remote desktop app lets you use the full Microsoft Office package and the best part is that you can mix in apps from the phone. For example, you can reply to a text without breaking your workflow. You can even yank the phone from the dock to answer a call and then go back to work with no hassle - the desktop apps will be as you left them.

The Samsung DeX software is optimized for 1080p monitors (16:9) over HDMI, but it will work with other resolutions too. The Galaxy S8 uses DisplayPort to send video out to the dock, but it doesn't seem like DisplayPort monitors are supported by the dock itself.

Interestingly, the dock has a fan to keep the phone cool under more demanding workloads.

I will translate your question: But, will it run CRYSIS !!!???