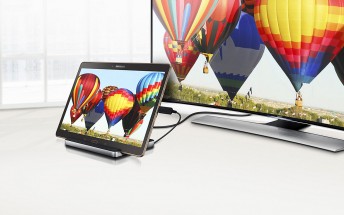 Samsung has made it clear that it thinks AI will be the killer feature of 2017 flagships, but could desktop mode prove to be a dark horse? Weve seen leaked slides about Desktop eXperience (DeX for short) that will turn the phone into the heart of a desktop workstation. Yes, basically Continuum, but based on a more popular OS.

The Galaxy S8 and Galaxy S8 Plus should come with USB-C ports that are just the right port for a one cable workstation - power, video out, high-speed data and so on. There are USB-C monitors that double as USB hubs so you can hook up your peripherals to them.

However, it sounds like Samsung DeX will use a dedicated dock, a DeX Station, instead of relying on relatively rare monitors. Such things are hardly new - remember the Smart Dock for the Galaxy Note II? Here's hoping Samsung gets the software execution right this time.

Samsung has perhaps the biggest experience in running Android apps in split screen and floating windows (it has been doing it long before Google added it to Nougat). It has been doing it since the Note II in fact, so we wonder what Samsung has improved to make it more successful now than it was then?

I am wondering what technology is Samsung using - Slimport or MHL? Can't find any information on their sites either...

This isn't the same continuum, this will offer similar features but it will in fact be running on android which works a hell of a lot better for multitasking than windows mobile.