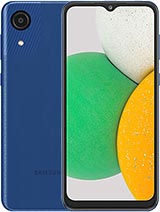 I'm not sure
should get this phone over the a3 core

The back of the a03 core looks like an iphone xr while the screen looks like the average a01. Weird combination but alright

Narazumono, 15 Nov 2021This phone is clearly a time traveler because it came from ... moreIt clearly looks like these older htc devices

MilesPrower1, 03 Dec 2021People on this site dont seem to understand that low end ph... moreThis is the magic of Android. You get access to all Google tools without ruining yourself

Anonymous, 12 Dec 2021This phone is good enough for people that don't need a... moreIndeed. This phone could be used as a 4g Hotspot which doesn't require high end processor.

For someone like me who is used to 4gb ram on phones like the galaxy a12, oppo a53, Huawei y9 prime and redmi 9, there's no way in hell that I would make this phone my daily driver, but for Hotspotting it would be fine.

2gb ram is pretty horrible to use, unless you're making phone calls or just the basics, then it should be fine

This phone is good enough for people that don't need all those social media nonsense but need newer phone software to run some messaging apps like whatsapp or telegram. You all often forget that not everyone in this world is a heavy phone user

This phone will age like milk. I don't see why anyone would buy it.
Better to spend a little more and buy a decent phone that you can use for 2-3 years instead of this garbage that will start acting up in less than a year making you wish you never bought it

MilesPrower1, 03 Dec 2021People on this site dont seem to understand that low end ph... moreExactly, low-end phones are meant for basic daily use, and if those people think they're getting a good phone for gaming, they aren't.

DevWarehouse, 26 Nov 2021This phone is for calling and texting mainly, not gaming. I... morePeople on this site dont seem to understand that low end phones need to exist as well as not everyone can afford to spend even $150 on a phone

they couldve atleast made the battery removable on this low low end phone. now its just garbage.

This phone is for calling and texting mainly, not gaming. If you're getting this for gaming, prepare to be disappointed. Other than that, not a bad phone as it seems reliable for just calling, texting, watching some videos etc.

Apple is the best, 23 Nov 2021🤣🤣 Samsung poor with 2GB RAM Unisoc processor and 8MP??? re... moreSamsung is doing this to make cheap phones for daily usage
And not gaming....