The Galaxy A12 is made mostly out of plastic - a very good-looking and nice feeling plastic. It's not really a rear panel and frame type of build - there's no exposed 'frame'. Rather, it's a unibody construction where the back cover also envelops the periphery of the handset. 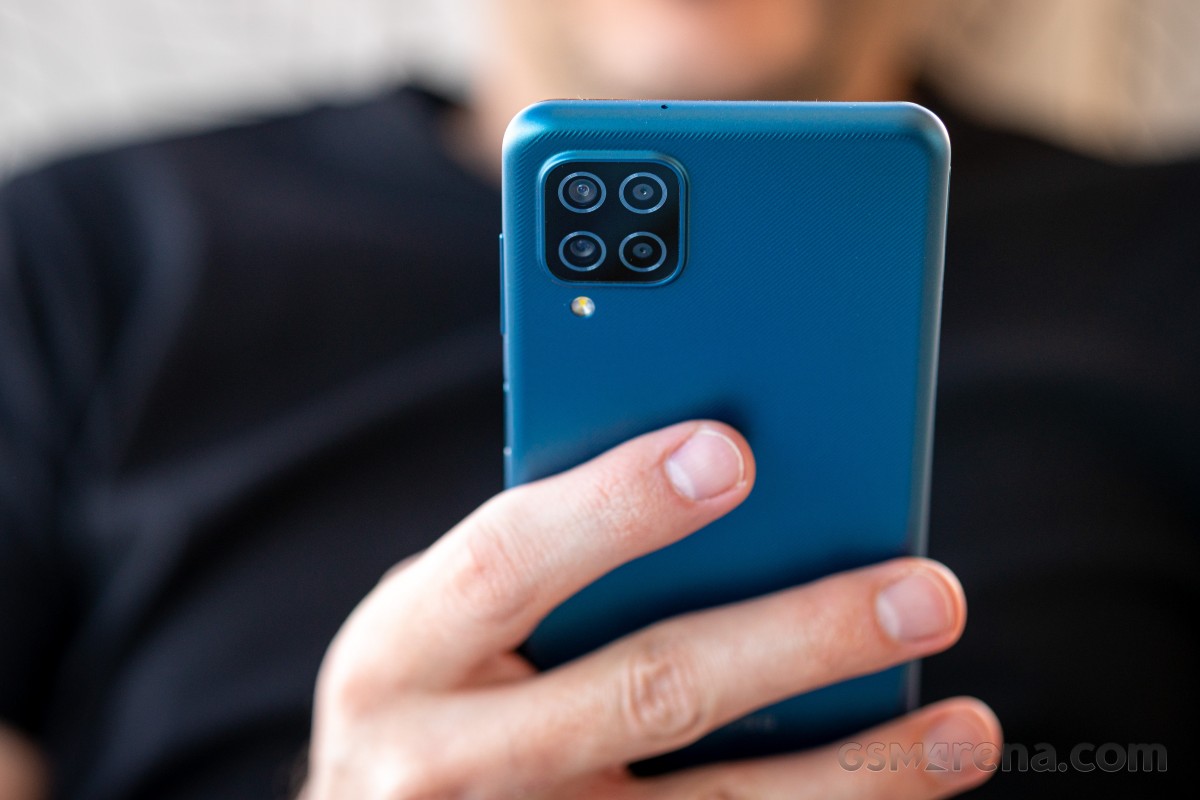 The back is split three-to-one with the larger top portion treated to a diagonal stripe texture. We wouldn't say it improves grip, but it's not detrimental to it either. It is pleasing to the eye, though, and that's a win.

Down in the bottom quarter, Samsung's logo is joined by some regulatory markings, the latter in a less contrasting print, thankfully. 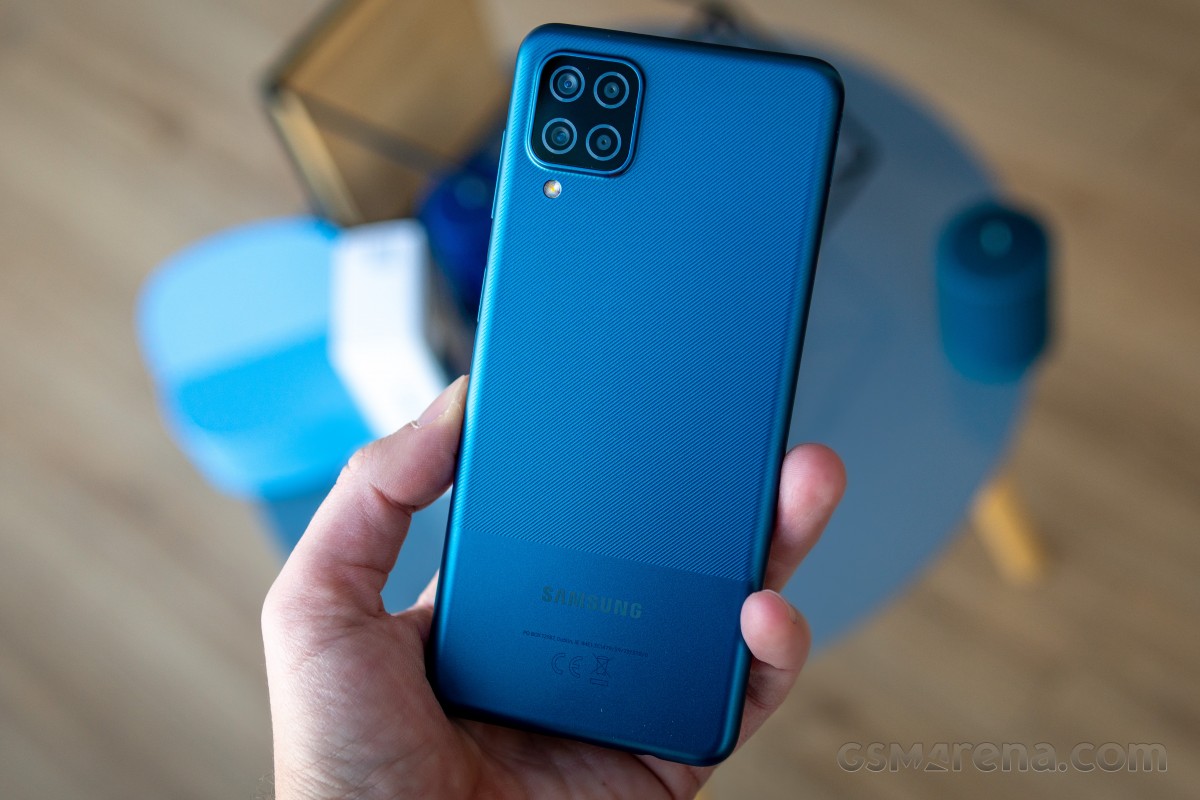 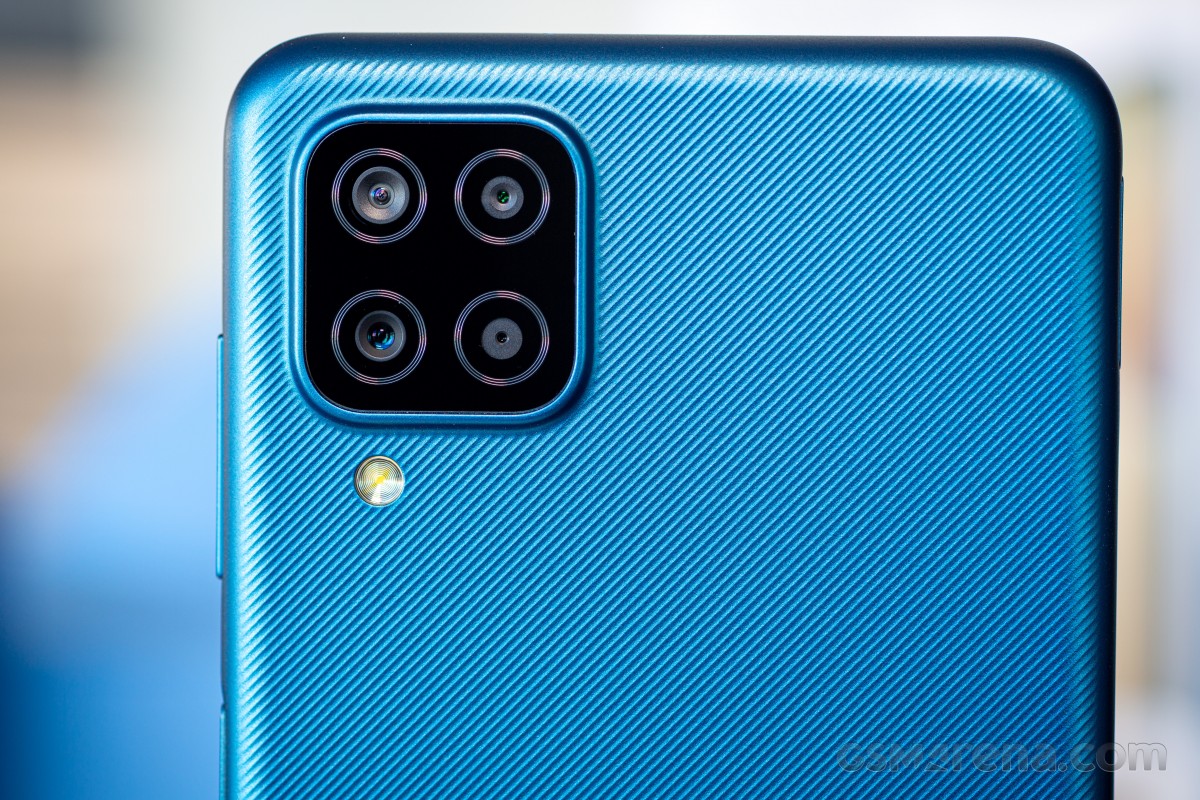 The front is home to the Infinity-V display, a small notch up top making way for the selfie camera. A almost invisible slit above it is where the earpiece's sound comes out of. 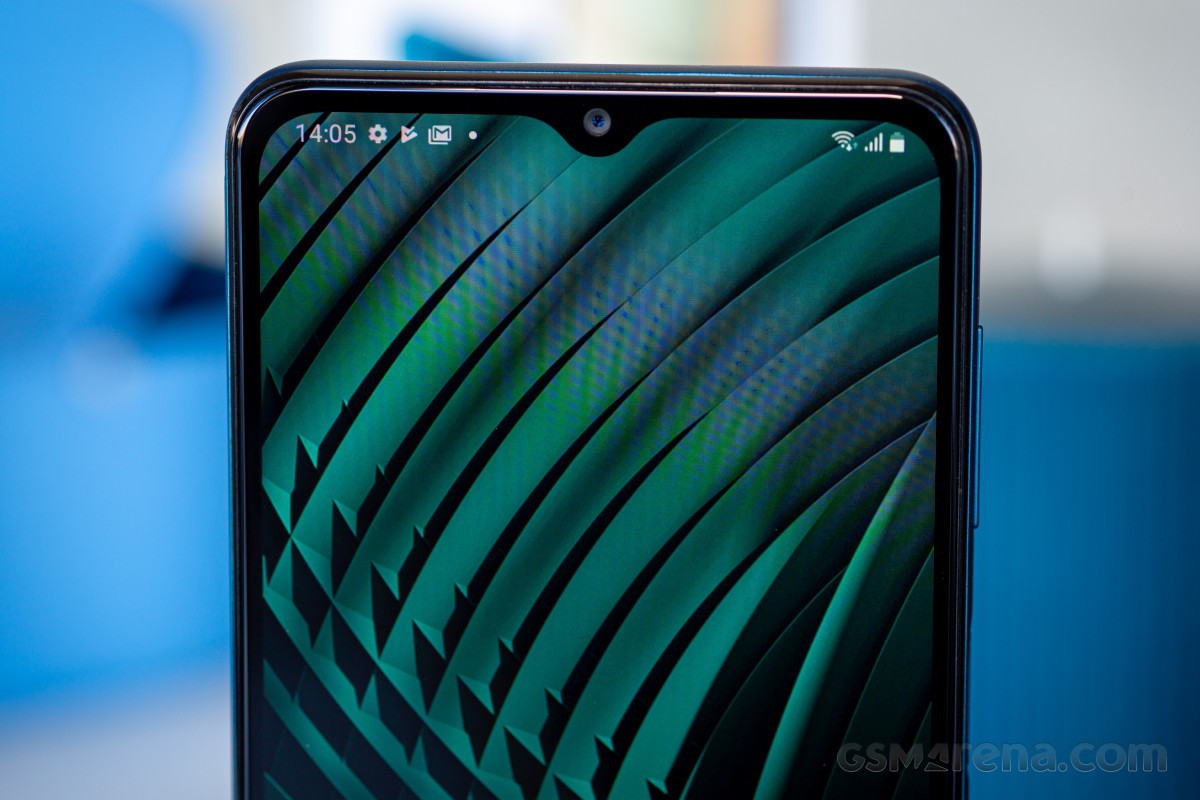 Surrounding the display are reasonably-sized bezels. It's not a premium phone, so a bit of extra black frame all around is to be expected. The chin, in particular, is a bit chunkier, but it's well in line with competitors in the class, like a Poco M3 or a Realme 7i. In any case, we'd say the Galaxy A12 isn't looking dated or cheap on account of its bezels. 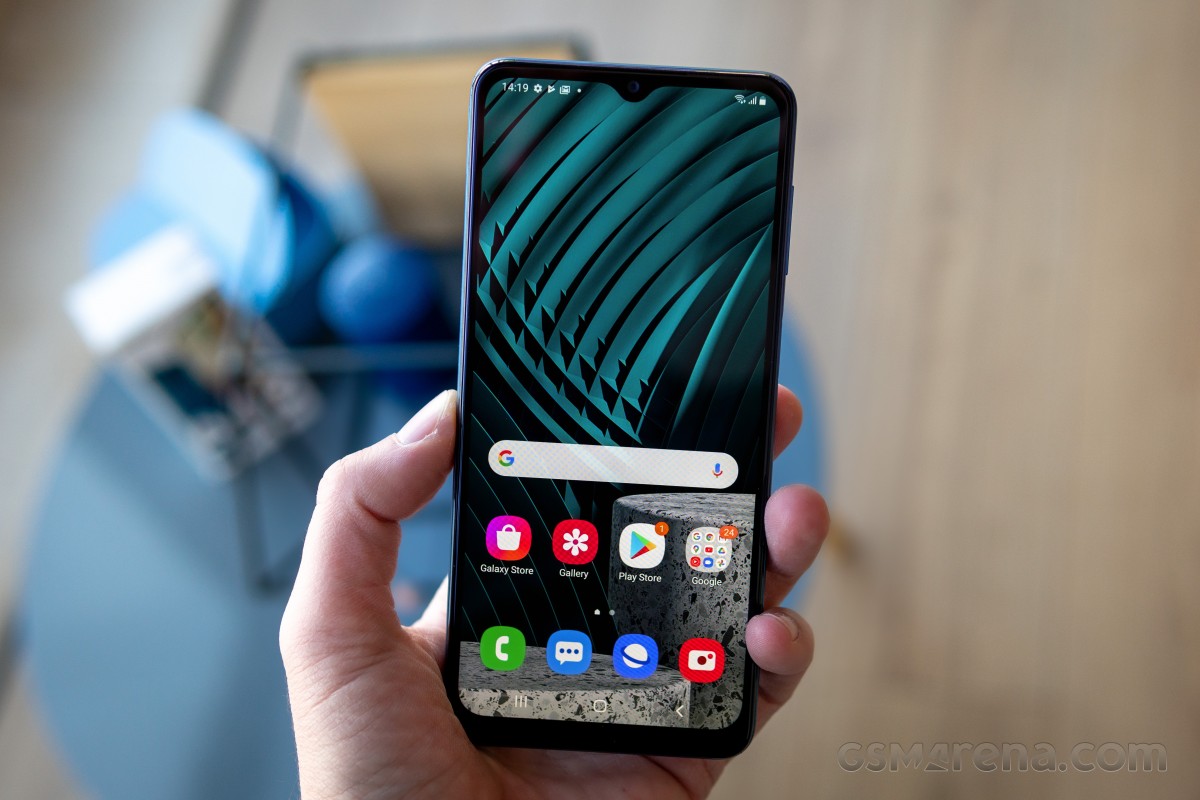 We're not huge fans of the display's coating; however - it's among the more prone to grease accumulation ones we've handled lately. Granted, we mostly handle flagship phones, and there is nothing a glass screen protector with oleophobic coating can't fix.

As for the glass itself, Samsung doesn't say anything about the type used on the A12, and Corning doesn't mention it in its database either. 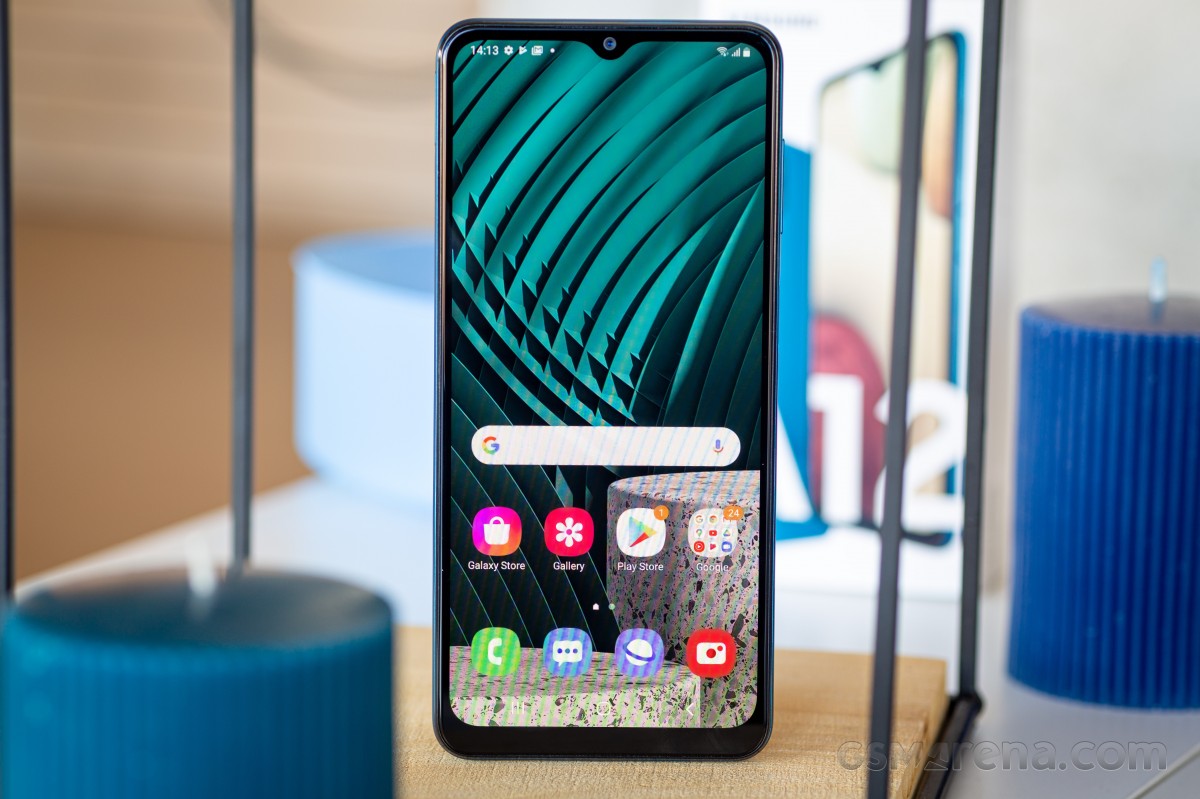 Touring the sides of the phone, we find the fingerprint reader/power button combo on the right. Positioned a bit above the midpoint, it's ever so slightly too high for an 'average' left index finger to reach, but a minor adjustment of grip gets you there. No issues for the same average-handed person's right thumb either.

The volume rocker above the fingerprint reader is a bit harder to reach but hardly a dealbreaker.

High up on the opposite side of the A12 is where you'll find the SIM slot. It's our favorite type, letting you use two nano SIMs and a microSD card for storage expansion all at the same time.

Down on the bottom of the Galaxy A12, you'll find the USB-C port - thankfully, microUSB has been replaced on all Samsung models, but the absolute least expensive A02 and M02 ones.

The other bits that belong in this region are around as well - the 3.5mm headphone jack, loudspeaker and primary mic.

A lone pinhole up top reveals where the secondary mic is.

The Galaxy A12 measures 164x75.8x8.9mm and weighs 205g. It's about the same size as most major competitors, and while they're all in a similar weight ballpark, the A12 is a few grams heavier. 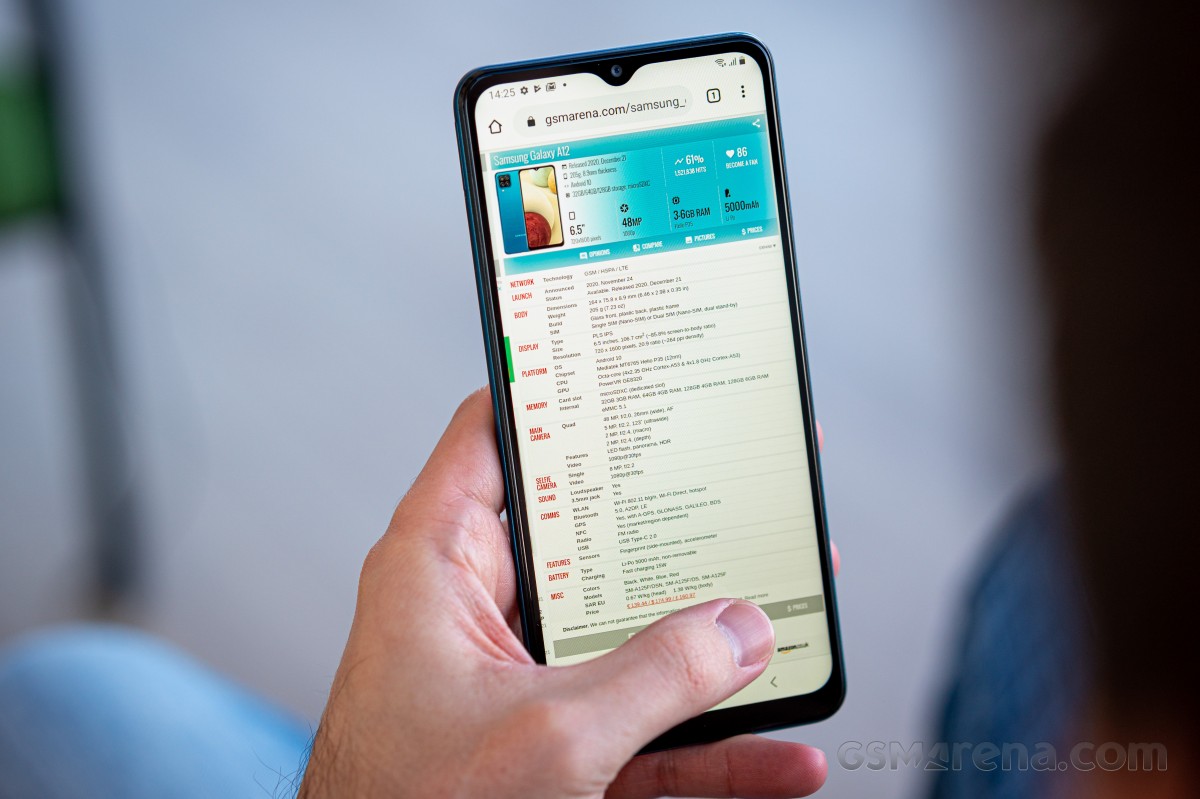 Overall, we like the build of the Galaxy A12. The textured back is a breath of fresh air, the plastic is pleasing to the touch, and the triple card slot wins points for versatility. The screen's coating leaves a bit to be desired, but that's about it.

magnetometer and gyroscope : not disponibles Camera Front and Back: not a good quality

Had this for 1 week now...great budget phone. Battery lasts for 1 day after a full day of heavy use.

How good is the product... Because it's beginning to entice me a lot...