Samsung currently has a few different "looks" within its lineup. This design language, particularly the camera island with the separate cameras and no islands dates back to the Galaxy A32. Though, now that the Galaxy S22 Ultra brought that look to the very top of the company's range, the Galaxy A13 gains a few trendy points. In contrast, the Galaxy A23 sticks to the more traditional Galaxy A series island painted the same color as the rest of the back. 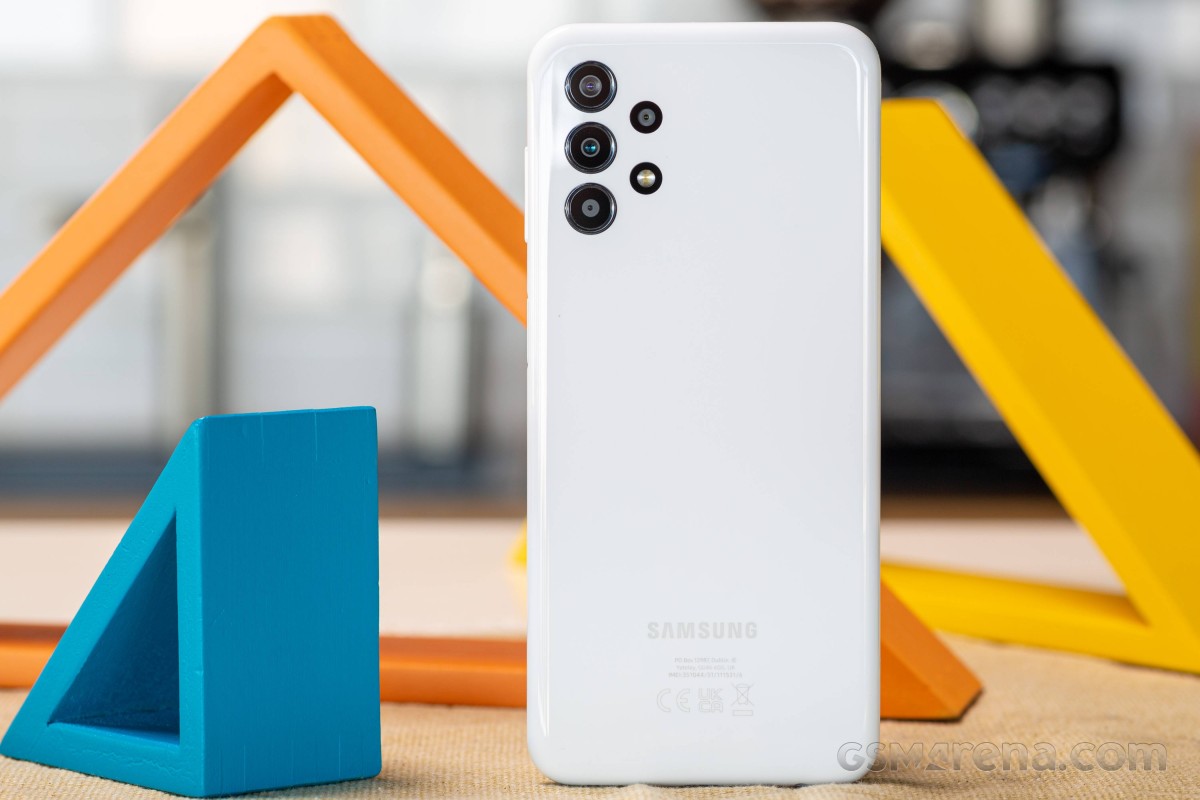 Unlike the Galaxy A32, though, the A13 has a simpler overall body construction. Instead of using a three-piece design, the A13 has a plastic unibody, which was all the rage a few years back but very rare these days. It is made of plastic, which makes it lightweight and also can't really shatter or dent. It can scratch and chip, though, and the material Samsung is using on the A13 isn't the sturdiest. In fact, our review unit managed to pick up a nasty black blemish and a chip in the frame during the review without us doing anything particularly harsh to it. 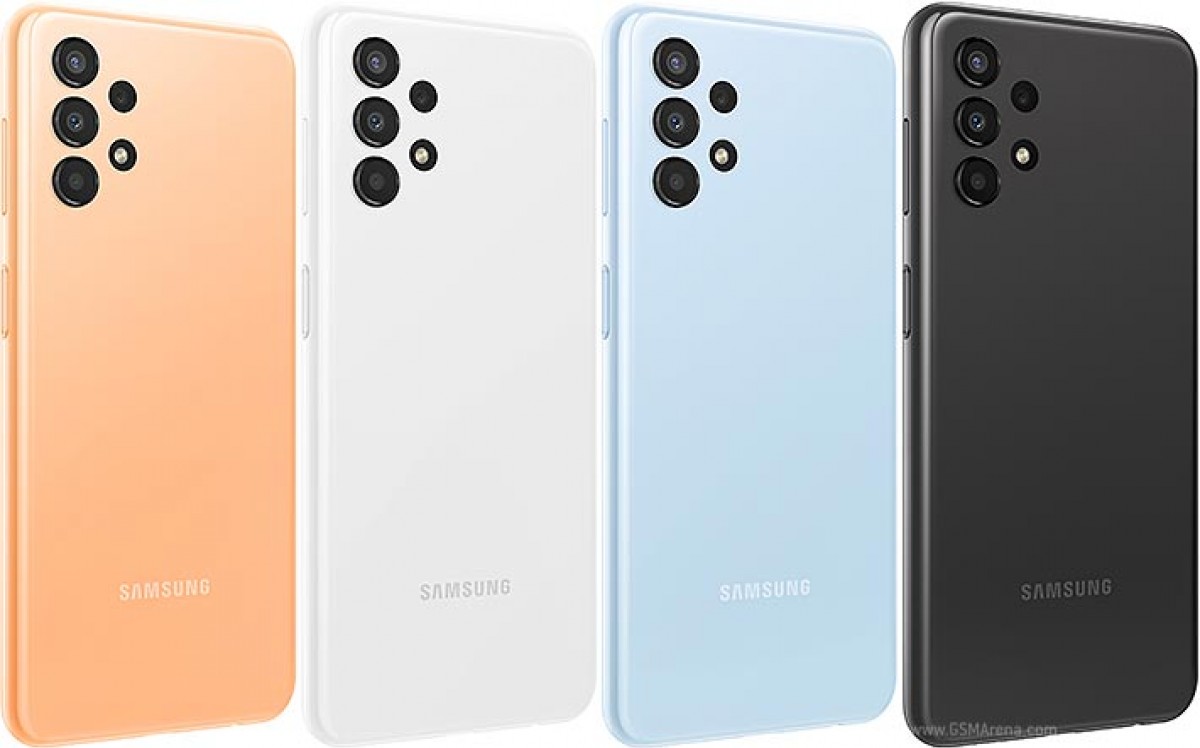 You can get the Galaxy A13 in Black, White, Peach and Blue. The latter looks fresh and "youthful" and might be pretty popular, given the Galaxy A series is mostly geared towards a younger crowd.

Our white Galaxy A13 looks good from a distance, but it loses a lot of its charm up close. The finish looks pretty cheap and while the glossy surface doesn't show dirt and grease, it still accumulates them and can quickly get kind of nasty to the touch. 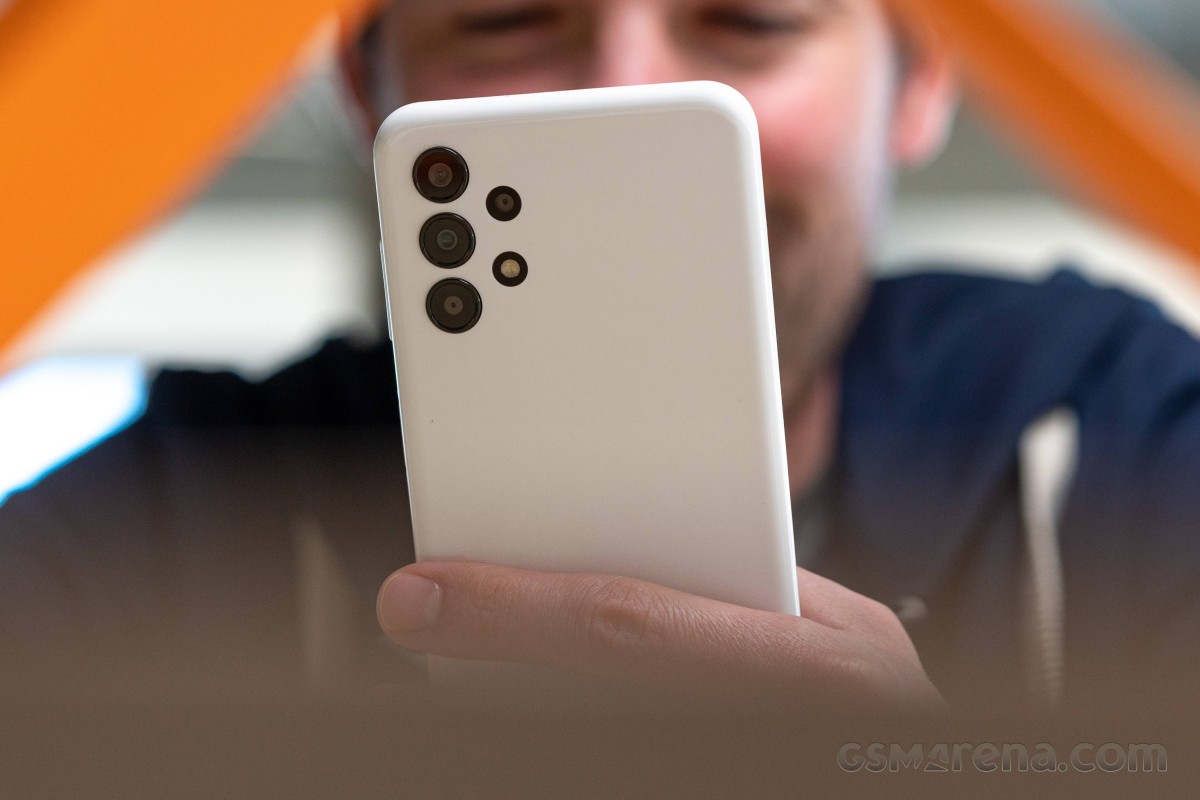 The surface isn't particularly grippy either, which makes the A13 slippery and diminishes its handling a bit. The shape is ergonomic enough but does need a case to fix handling.

As we already mentioned, the particular plastic on the unibody of the Galaxy A13 isn't particularly sturdy and doesn't feel particularly good either. There is also noticeable flex to the pack panel with an air gap between it and the battery on the inside. A hollow feeling is never great. 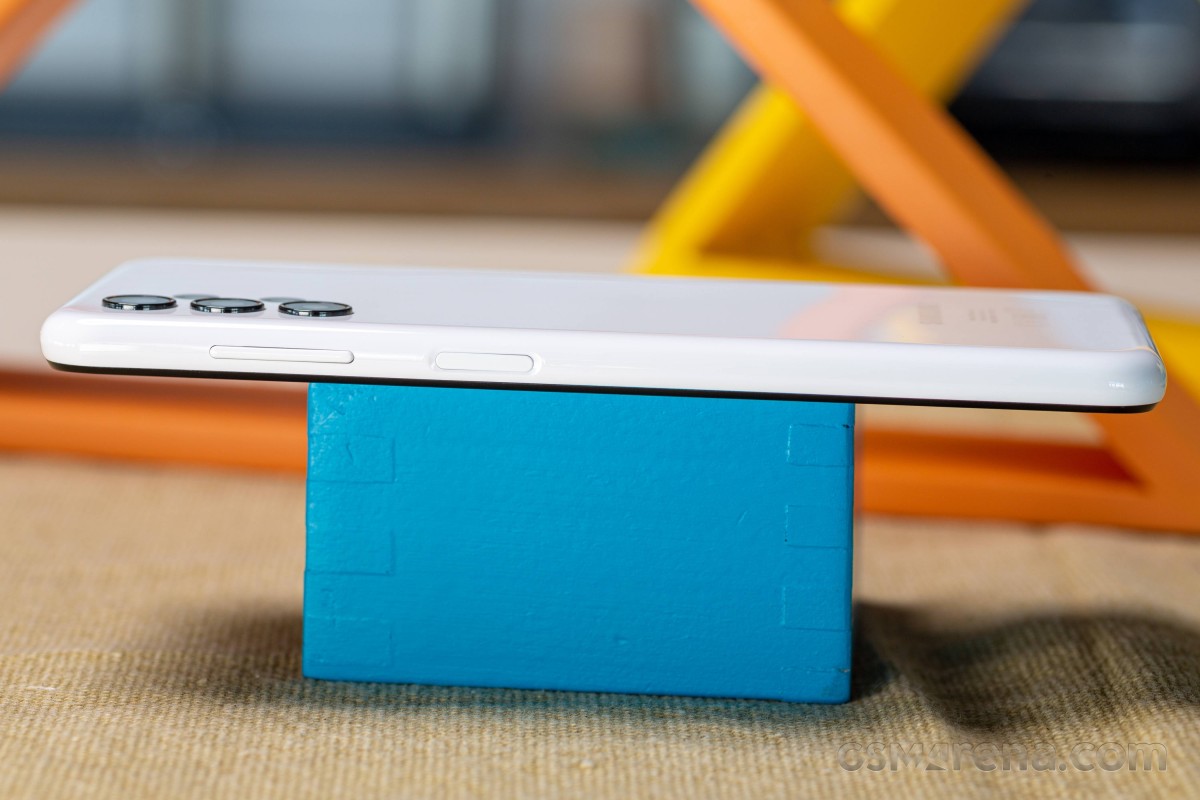 On a more positive note, the way the display is slotted into the unibody is reassuring and there's a protruding black plastic frame on all sides. That means that a fall should mostly get absorbed by this frame and not the glass and display. 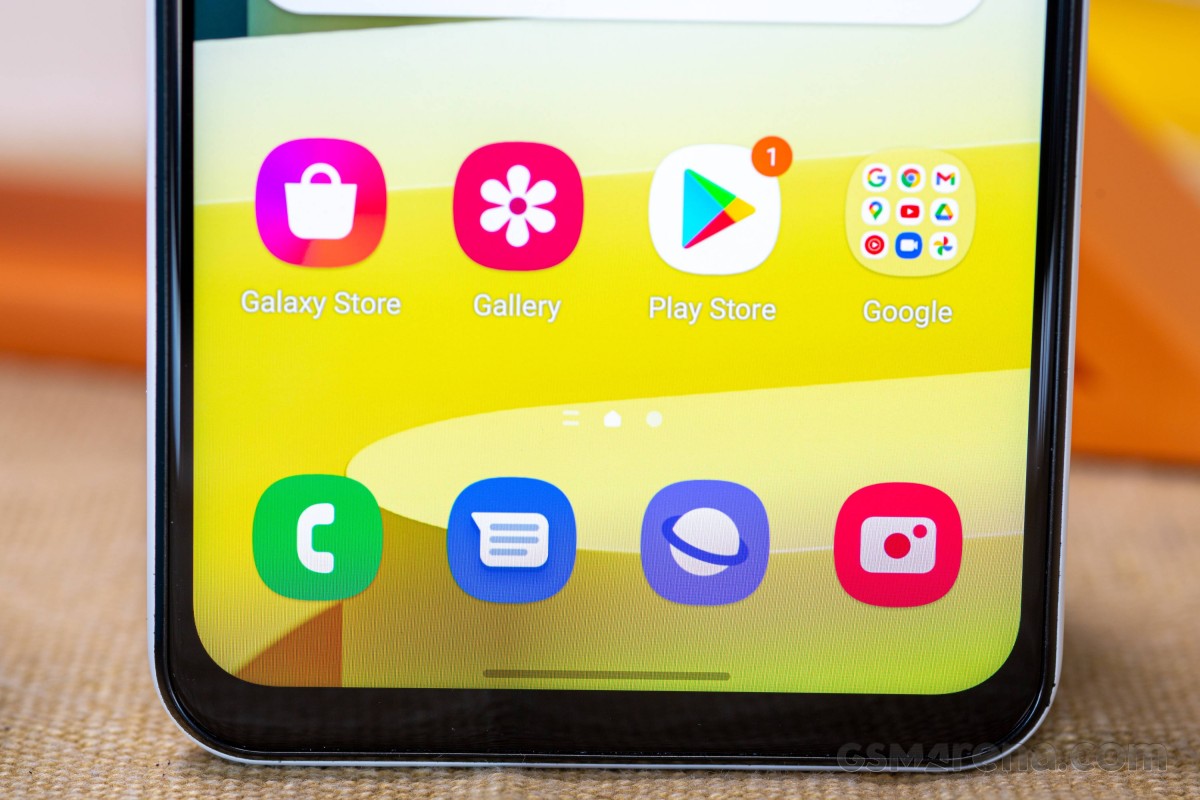 The Galaxy A13 actually has a name-brand Gorilla Glass 5 protective finish on the front. That definitely instills a lot of confidence. Much more so than the, say, the Galaxy A12 or the A03, which just have an undisclosed glass protective surface. The display surface itself is almost perfectly flat for the actual display bit and the reasonably-sized display bezels, which means that applying a glass screen protector for even more peace of mind should be easy.

The Galaxy A13 has a standard control scheme. The volume rocker and power button are on the right-hand side and well-positioned in terms of height. Neither feels quite right when pressed, though as they are a bit mushy and without much tactile feedback. The volume rocker is also on the thinner side. Making it a bit wider might have helped the situation. 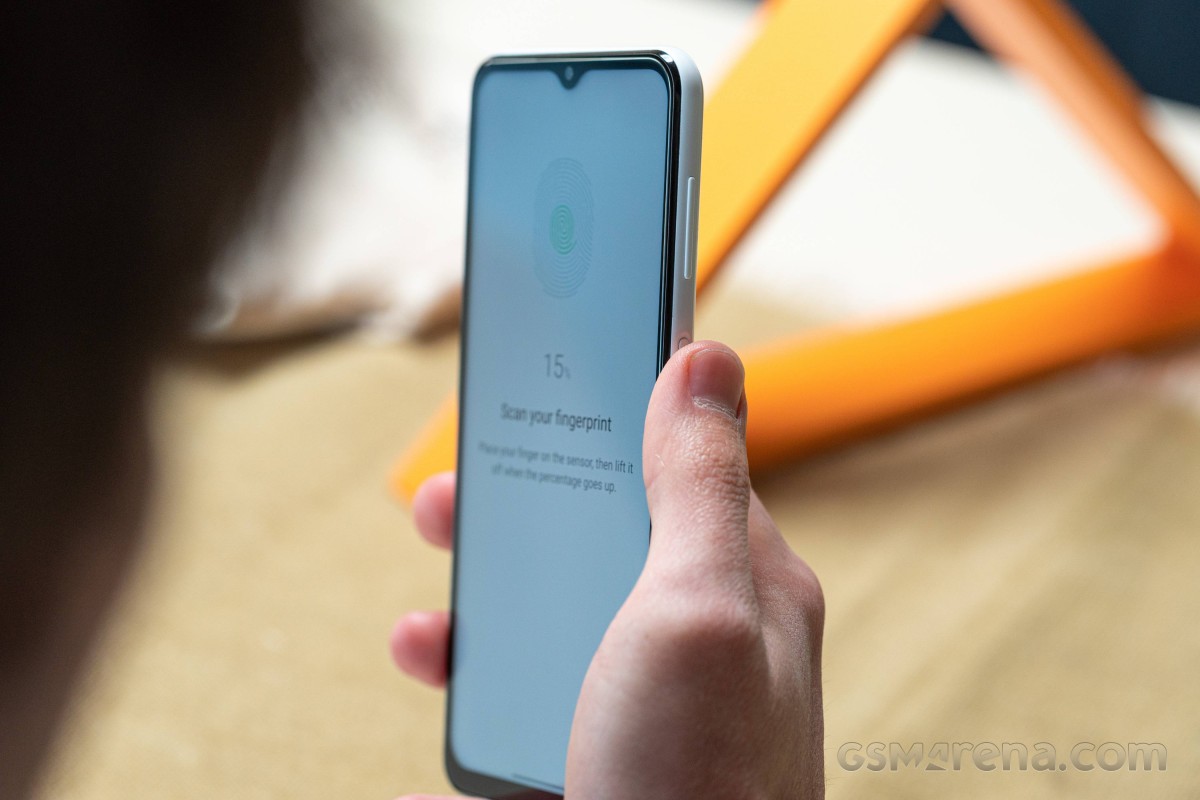 The power button on the A13 doubles as a fingerprint reader. Snappy and perfectly reliable - we have nothing to complain about. 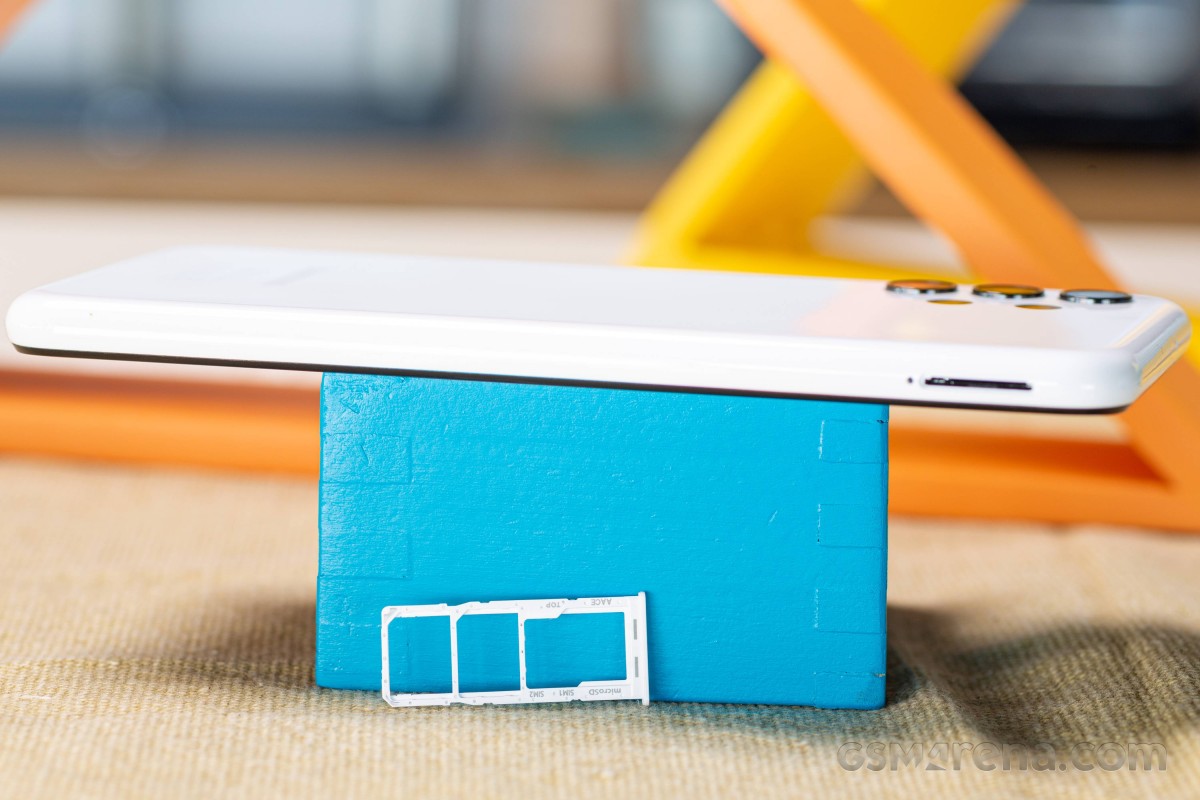 The left side of the flare just houses the triple card tray. It includes two nano-SIM slots and a separate microSD slot, so no picking and choosing needed. 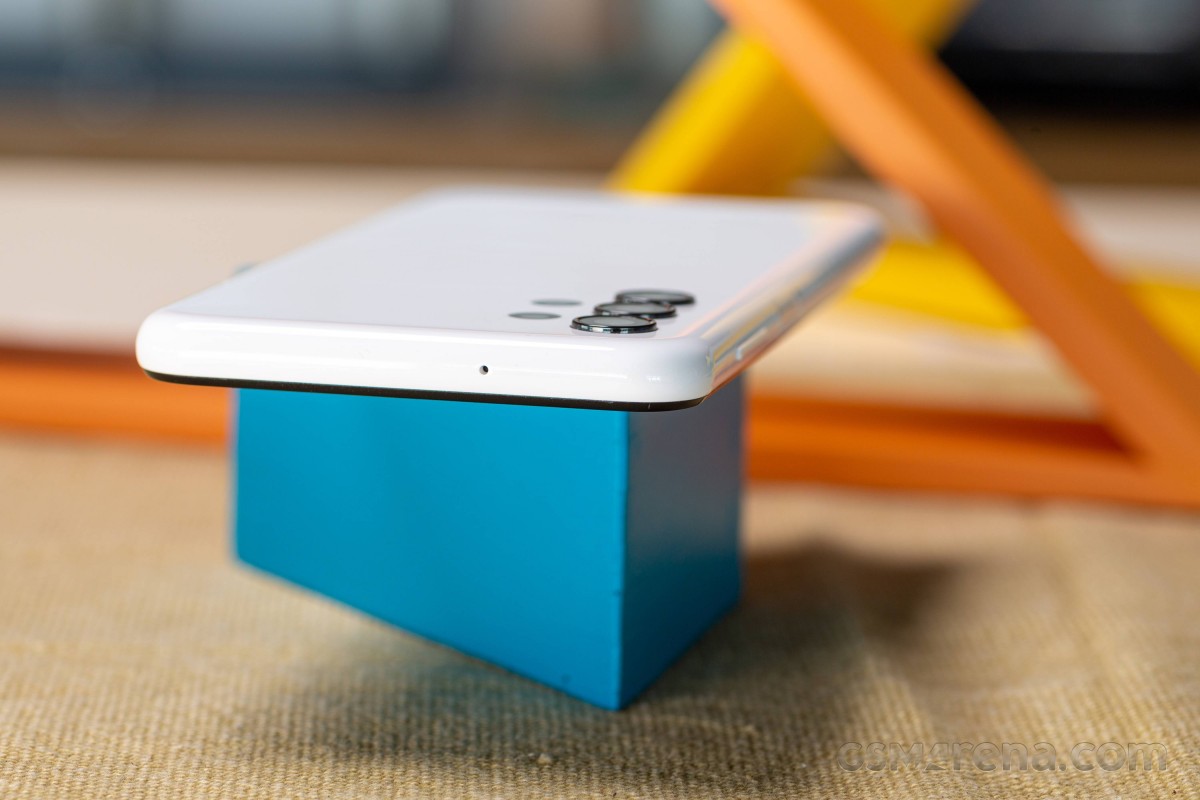 The top of the Galaxy A13 is pretty much empty. It just has the secondary noise-canceling mic inside a small hole.

The bottom of the phone has the bottom-firing speaker. The Galaxy A13 doesn't have a hybrid setup with the earpiece or anything of the sort, so that's the only speaker there is, but you do get a 3.5mm audio jack. And the main microphone is here as well. 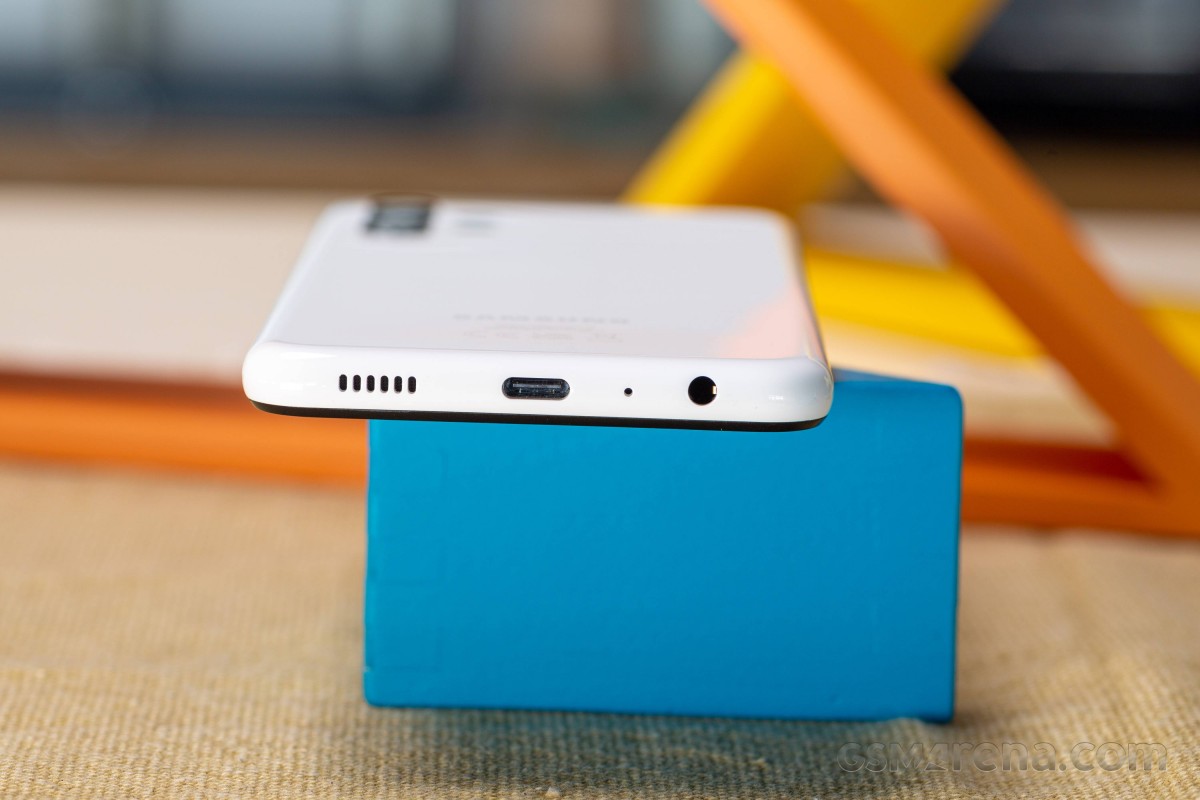 Rounding off the controls tour, we need to address the sensor situation. The A13 has an accelerometer, magnetometer, rotation, compass, orientation and motion sensors. There is no full-featured hardware proximity sensor. It is a virtual unit recognized by the OS as a Samsung Ear Hover Proximity Lite Sensor (ProTos Lite). That means that it uses a combination of data from the phone orientation sensor and the selfie camera to turn off the display during calls but does not provide an actual proximity readout. It is not particularly accurate in practice and frequently does not turn off the display during calls. 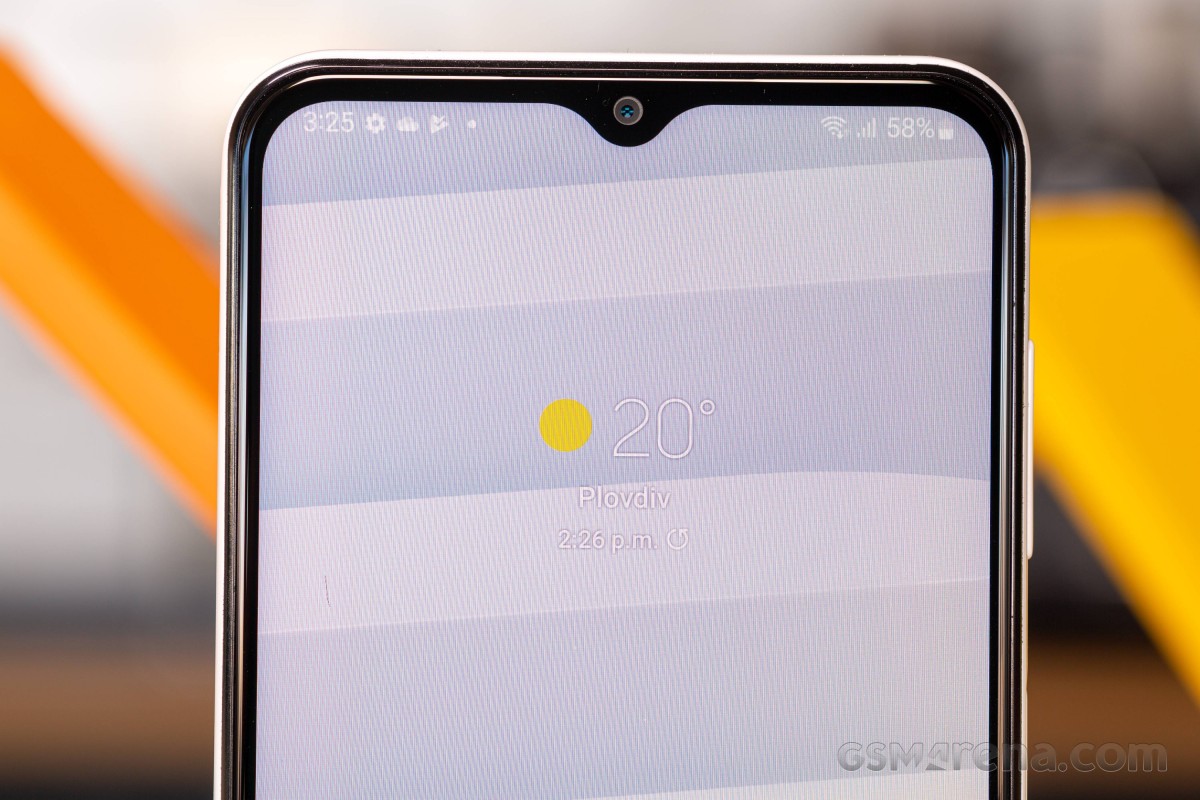 Arguably worse still the A13 also lacks an ambient light sensor. It uses the selfie camera to measure ambient light. This is a very much flawed and inefficient system. Not only is the reading not nearly as precise, but the phone can't afford to take measurements too often since the camera wastes a lot of power. That makes the A13 sluggish and inaccurate when responding to external light changes. In practice, it took a very long time for the A13 to respond to bright sunlight. Oftentimes the brightness wouldn't even boost after taking the phone out of a pocket at all. And bringing it indoors afterward rarely resulted in automatically lowering the brightness. We found ourselves turning auto brightness off and managing it ourselves as the auto was downright infuriating in its unreliability.

In case anybody was wondering, there is no notification LED on the A13, but that's the norm, rather an exception.

The two nano-SIM slots on the Galaxy A13 are both capable of Cat.7 speeds of up to 300 Mbps down and up to 150 Mbps up, with 2x (2CA) carrier aggregation. There is dual standby as well. 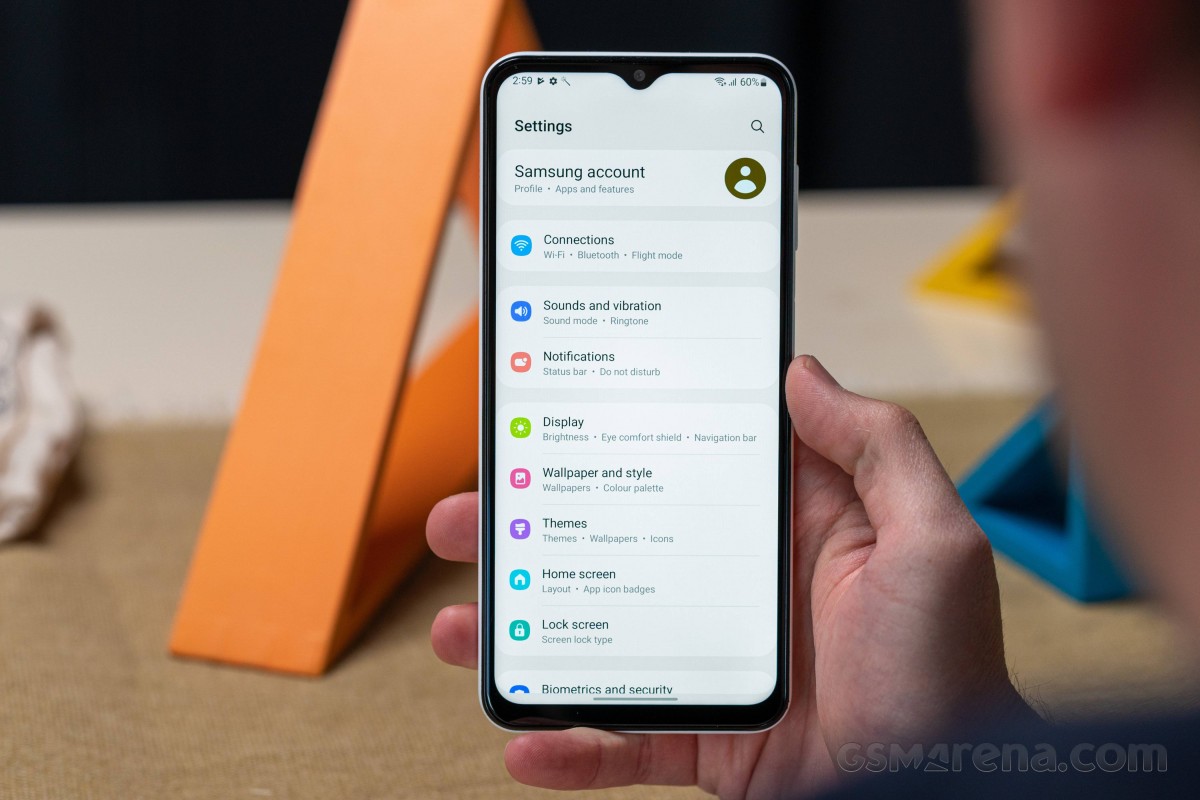 In terms of local connectivity, the Galaxy A13 maxes out at Wi-Fi 5, along with Wi-Fi direct and hotspot support, as well as Wi-Fi Miracast . You also get Bluetooth 5.0 with LE. Our unit has NFC, though that seems to be market-dependent, so check with your local retailer. The A13 has GPS with A-GPS, GLONASS, GALILEO, and BDS for location.

Interestingly enough, the Galaxy A13 lacks an FM radio receiver, even though the official specs for the Exynos 850 claim that there should be one on board.

All this u guys are saying isn't true. How do except a phone of about #120000 here in Nigeria to have an extremely good specification. Let's be realistic guys. The phone is actually very good at the price. Samsung 💥

radio is only available in certain markets...mine doesn't have fm radio but I don't mind as I use internet radio

my texts don't dissapear on mine....thats an odd one