The Samsung Galaxy A21s employs a large 6.5-inch PLS TFT screen with 720p+ resolution and 20:9 aspect ratio. It has a punch-hole cutout around the top left corner to make way for the selfie camera and its corners are trendily rounded as usual. 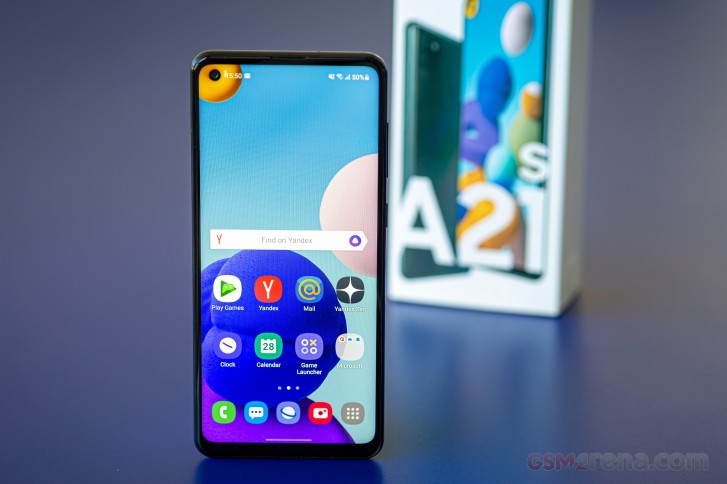 The exact screen resolution is 1,600 x 720 pixels or about 270ppi. That's not exactly sharp, but you will have a hard time finding pixelated content. For the budget class, 720p is the acceptable resolution and it is in line with most of the A21s competitors.

The maker of the protective glass on top of the LCD was not specified by Samsung, though.

You will probably notice the uneven backlight around the punch hole at some point. It is annoying only on bright backgrounds, but it was to be expected as the LCD's LED backlighting can't be perfect. 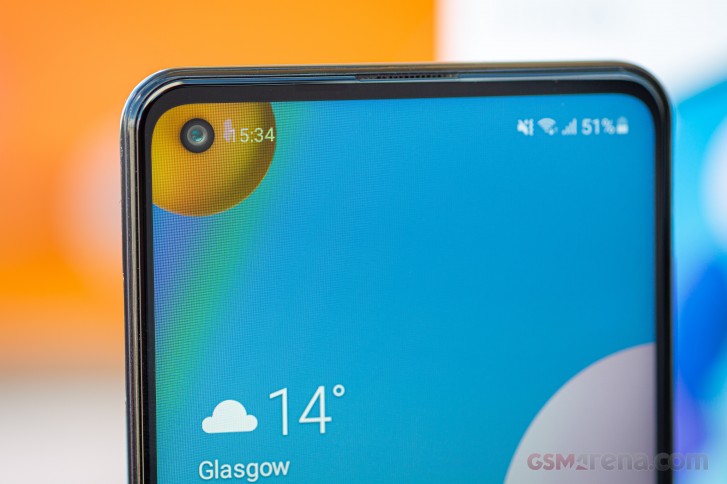 We measured a maximum brightness of 408 nits in manual mode, and 491 nits in auto mode. That's an average result for an LCD screen, but it is okay for a budget phone. The Redmi 9, for example, has an even dimmer screen at max brightness.

The black levels of the Galaxy A21s display turned out about average, too, and overall, the panel offers a good contrast ratio of about 1300:1 - we've seen worse, but we've seen better as well.

The minimum brightness at the far left of the scrubber is 4.8 nits, which is a good for reading in the dark but not outstanding.

Color reproduction is consistently off on the Samsung Galaxy A21s. There are no contrast or color options, and the screen shows colors within the sRGB gamma. We measured an average deltaE of 6.8 and maximum deviation of 10.5. There is a noticeable blue tinge over the white and gray hues, while the rest of the colors appear the be rather muted and the picture often looks washed-out.

The Samsung Galaxy A21s is powered by a massive 5,000 mAh Li-Po battery. It supports 15W quick charge and the phone ships with such charger. Unfortunately, it's not that 'quick' - it will replenish about 26% of its dead battery in 30 mins.

The Samsung Galaxy A21s posted an outstanding endurance score of 119 hours in our battery life test. The phone shows impressive times across the board - talk time, video playback, and web browsing. The standby performance turned out rather good, too. 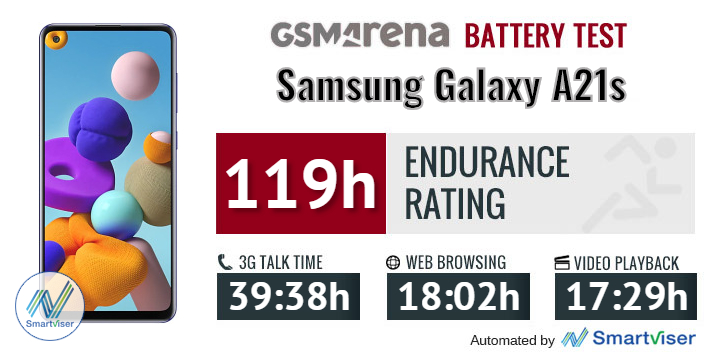 Our battery tests were automated thanks to SmartViser, using its viSerDevice app. The endurance rating above denotes how long a single battery charge will last you if you use the Samsung Galaxy A21s for an hour each of telephony, web browsing, and video playback daily. We've established this usage pattern so that our battery results are comparable across devices in the most common day-to-day tasks. The battery testing procedure is described in detail in case you're interested in the nitty-gritty. You can check out our complete battery test table, where you can see how all of the smartphones we've tested will compare under your own typical use.

The Galaxy A21s has a single bottom-firing unit, and it is tuned well with good presentation of mid-tones and bass. It posted an Average result for loudness in our seven-track music test, though, and no matter if it's a game, music, or video - everything sounds quiet.

This phone is cheap GARBAGE - why take away the NFC feature so can no longer use Google Pay? A20 had NFC but not A21? Make it make sense! Nah the Optus brand mobile has the NFC feature and does exactly the same as an Samsung A21 for much less in pric...

I've been using this phone for morethan a year now. My only problem is the low touchscreen sensitivity on some portions, and the below average loudness of its speakers, but everything else works great for me, and I really love its battery endura...

Are you professional user?