The cheapest 5G smartphone any given manufacturer currently has on the market has become sort of a weird competitive category in itself this year. For Samsung, that used to be the Galaxy A32 5G, which was released back in January, alongside the A52 5G and A72 5G. Now that title has officially been transferred over to the Galaxy A22 5G. Like its higher-tier sibling, the A22 is available in both a 5G variant and regular 4G. And once again, cramming in 5G, without deviating too much from the original price point has necessitated some major downgrades, compared to the LTE model.

For the Galaxy A22 pair goes, in particular, some of the major advantages the LTE model has over its sibling include its Super AMOLED display - slightly lower resolution, but otherwise better all around. Also, slightly better cameras, including an 8MP ultrawide, 2MP dedicated macro and a 13MP selfie cam. As of writing this review, all of this will set you back €209 for the base 64GB/4GB model.

On the flip side, the Galaxy A22 5G has an MSRP of €230, which will require you to settle for a 90Hz LCD display, a 5MP ultrawide, no depth camera and an 8MP selfie cam. However, the Galaxy A22 5G also has quite a few redeeming qualities. One thing that stands out, in particular, is its FHD+, 90Hz LCD display, which is notably better than the basic 60Hz, 720p+ LCD on the Galaxy A32 5G - a device that technically stands higher in the lineup and is still a bit pricier than the A22 5G. That's what half a year's worth of developments on the budget mobile scene can result in. Impressive stuff.

Samsung Galaxy A22 5G specs at a glance:

There are plenty of other interesting aspects of the A22 5G to examine beyond that as well, like its Dimensity 700 chipset, which on the surface sounds like just a slight downgrade compared to the Dimensity 720 powering the Galaxy A32 5G, yet has some particular limitations of its own, like a 2K maximum video capture resolution. But, we'll get to all that in due time.

Circling back to the important bits, just like its siblings, the Galaxy A22 5G is part of Samsung's new and ambitious plan for the best-selling Galaxy A family. The new "Awesome is for everyone" tagline fits like a glove. The value proposition is a clear priority on all of these devices.

Offering both 4G and 5G versions of all of the handsets is another way of making the lineup as appealing as possible. Speaking of which, budget or not, the Galaxy A22 5G still gets all the benefits and goodies that come with One UI 3.1, on top of Android 11, as well as Samsung's better and longer-term software support commitment, as of late.

As a budget offer, the Galaxy A22 5G understandably comes in a rather plain box. Perhaps Samsung can do a bit better for protection during transit.

On a more positive note, at least the A32 5G itself comes well wrapped in plastic all around, including thin strips stuck along the plastic frame, for extra protection. 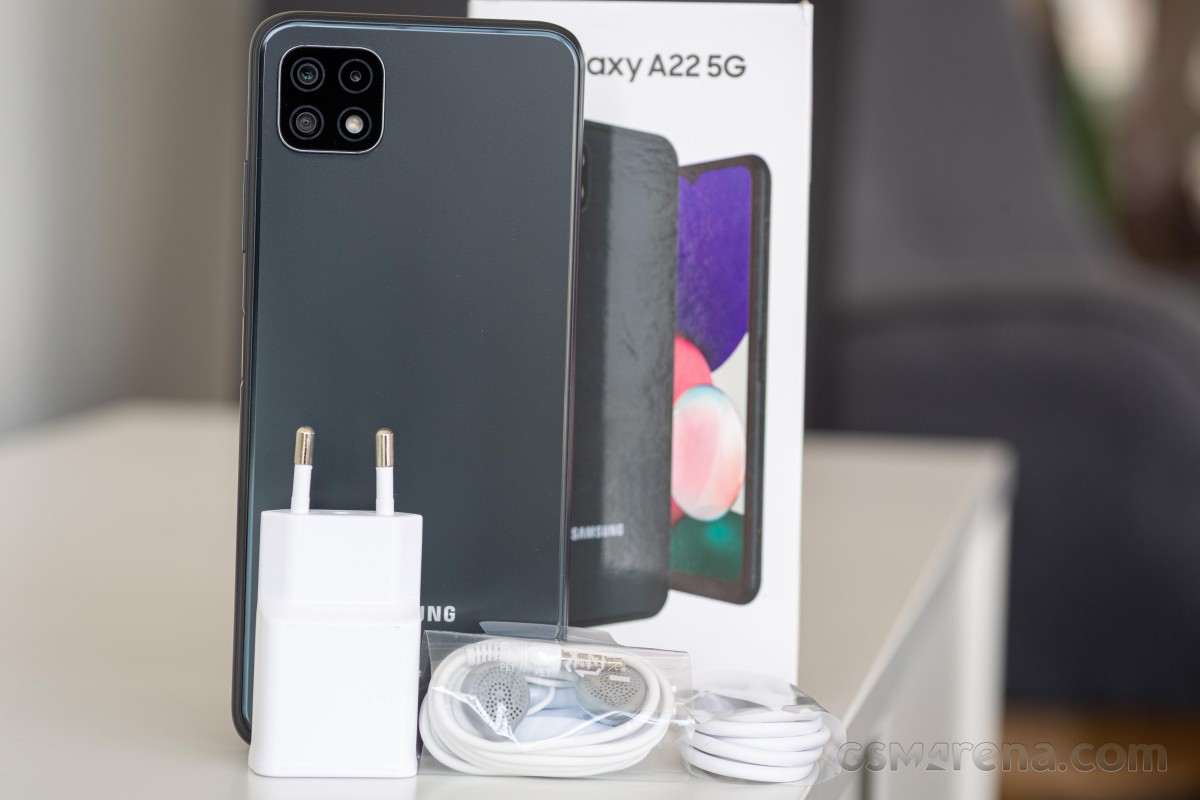 Speaking of protection, or lack thereof, the Galaxy A22 5G does not have a pre-applied screen protector, nor is there a case in the box. Both are common with budget phones from other manufacturers. What you do get is a basic 15W wall charger (9V@1.67A or 5V@2A) and a simple and fairly short USB Type-A to Type-C cable. At last, there is no proprietary charging scheme at play here, so you don't necessarily need to stick to the included cable to get the full 15W.

Our Galaxy A22 5G unit also came with a wired handsfree (buds with an inline microphone) in the box. This is a fairly basic Samsung-branded unit, nothing too fancy, though you do get an inline button as well. It is worth noting that this might be a regional accessory that not all packages get because we didn't get buds with the higher-tier A32 5G.

I am really disappointed with the A22 5G model I acquired just 2 weeks ago. I previously had the A8 and it was a gem of a phone. I don't need anything fancy with 4 different types of cameras or whatever. The fingerprint sensor on the side now is...