The Galaxy A41 looks a lot like its fellow Galaxies - a large AMOLED at the front, a plastic frame around the sides, and a mesmerizing rear panel that Samsung once referred to as "Glasstic". It has nice subtle geometric patterns and lines - enough to be intriguing, but not as flashy to be annoying. 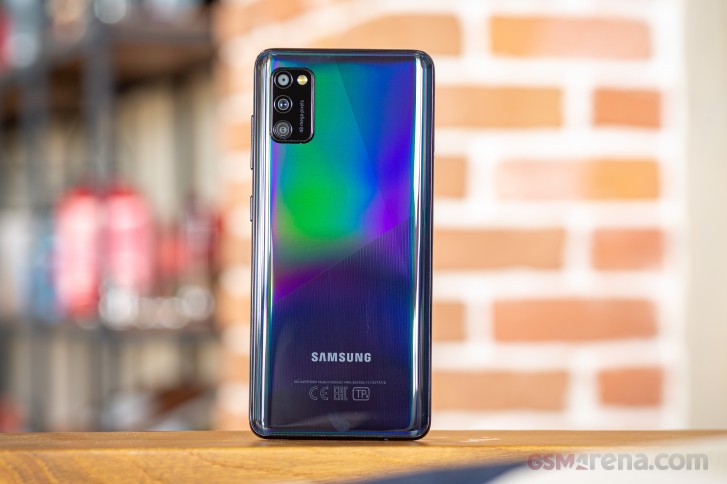 Making a budget phone requires some clever cost-cutting process and that's probably the reason why the Galaxy A41 is made of plastic. We do appreciate the extra efforts Samsung has made to make the whole thing look nice, and indeed - it has worked well for the A41. The gradient colors are mixing gently under different light, the not so random lines of different thickness look somewhat mystical, then the two lines that break the patterns are a very nice touch, too. Overall, a job well done.

Back to the front, there is a 6.1" Super AMOLED screen with a droplet-shaped notch for the 25MP selfie camera. The relatively small screen has extended 1080p resolution making for one very sharp 431ppi density. The bezels are amazingly thin, making for this premium feeling when using the A41. 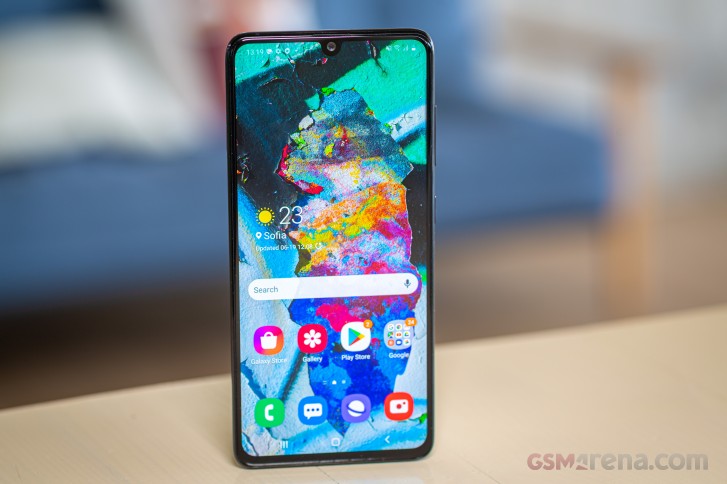 The earpiece is on the frame, just where the screen glass ends. This way it doesn't make for one more distraction around the screen notch. 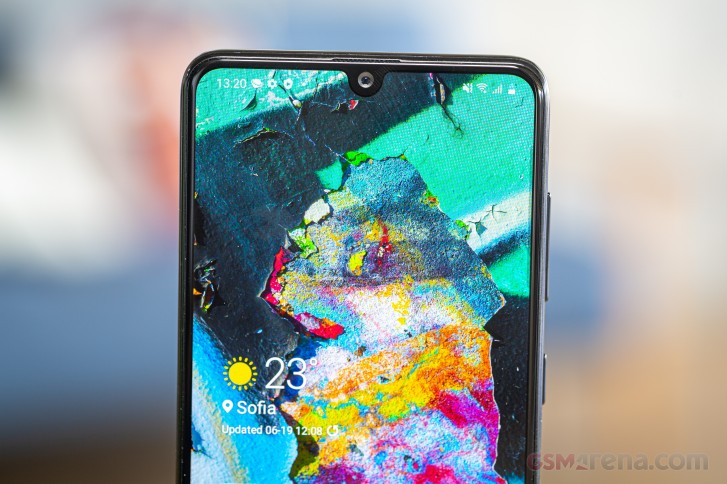 The screen hides the optical fingerprint scanner, another premium feature that made its way onto the budget Galaxy A41. Unfortunately, it's not that fast and not as accurate as some of the latest in the business. It works fine, but you need to hold your finger for a bit longer than usual, about 3 seconds, and if you didn't cover the whole surface - then maybe do it twice. 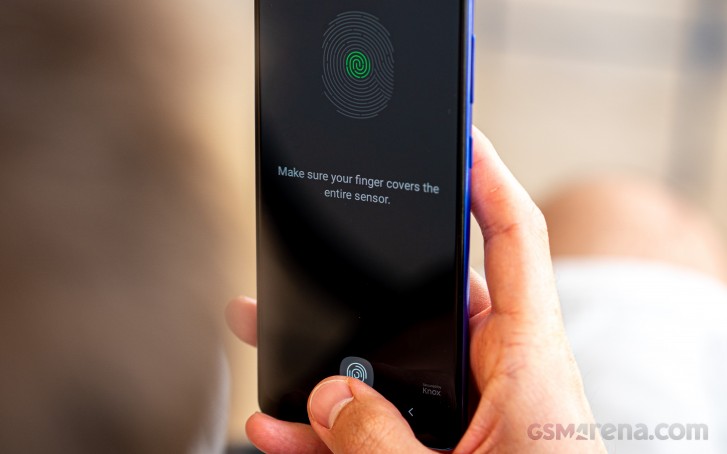 Luckily, Samsung also offers Face Unlock, and while it is not the most secure option, it can be configured to work simultaneously with the fingerprint reader and speed up the whole unlock thing.

If you are wondering about the screen glass source, well, we are, too. Samsung used Gorilla Glass on the Galaxy A30, A40, A50, and so on, as well as on the A51 this year, so we bet that A41 also features a Corning-made piece. If not, it is still some sort of tempered glass, so you shouldn't worry too much about that.

The Galaxy A41 is quite thin at 7.9mm, but you will find uncompromised essentials around its plastic frame - the 3.5mm jack, the USB-C port, and the speaker are on the bottom; the hybrid SIM slot is on the left, while the volume and power keys are on the right. 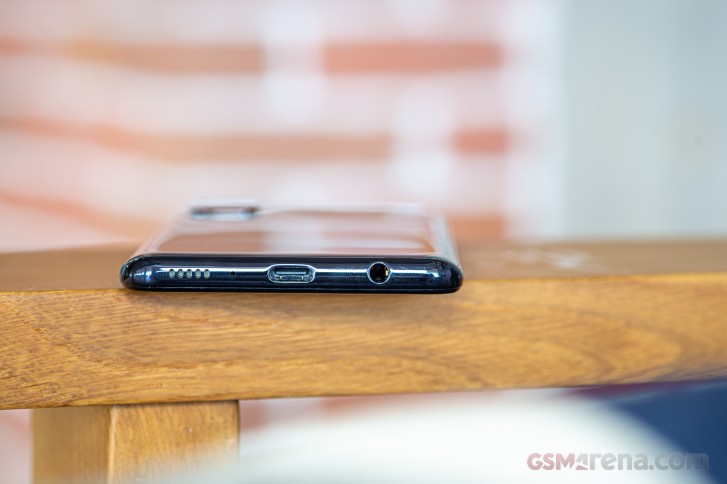 The camera module on the back isn't protruding much, though it is responsible for some wobbling. 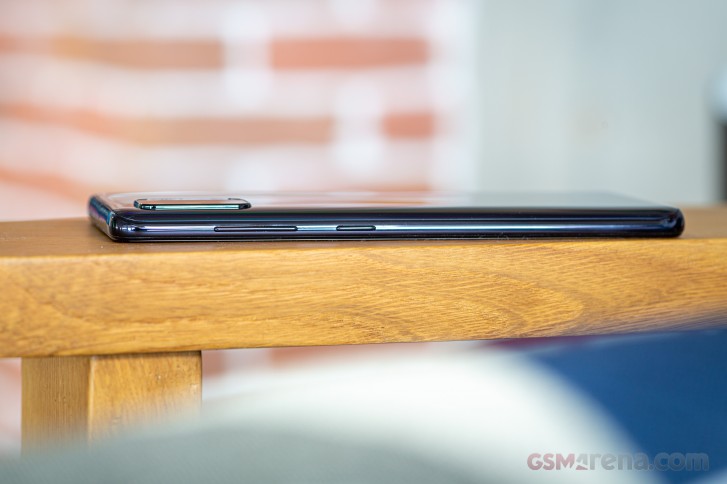 The triple-camera setup is the only feature of interest over at the back. It contains the 5MP depth sensor, the 48MP primary shooter, and the 8MP ultrawide snapper. A single-LED flash is also around. 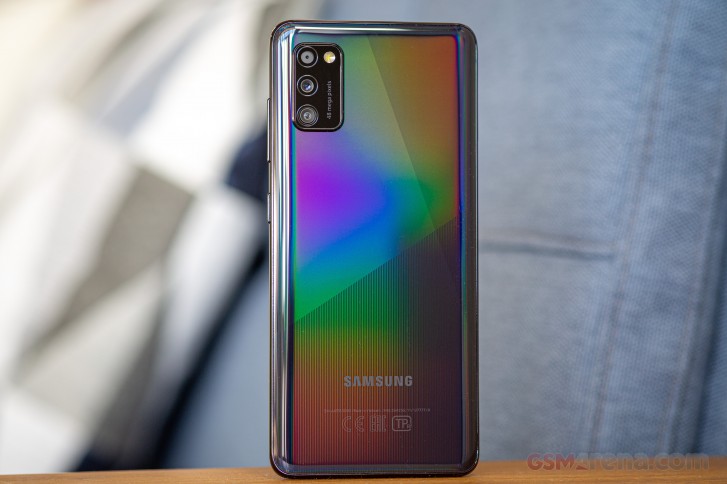 As we said, we are fans of the chameleon-like back and its shapes. It may not be everyone's cup of tea, and it is a rather big fingerprint magnet, but we think it is a nice touch by Samsung. It is also a match to other recent Galaxy A phones.

Samsung Galaxy A41 measures 149.9 x 69.8 x 7.9mm and weighs just 152g. This is 1cm taller than the iPhone SE (2020) and the same footprint as the Mi 9 SE, which we considered as one of the most compact recent droids. And indeed, the A41 is one of the smallest phones we've handled in a while - it's very light and pocket friendly. This alone will sway a lot of people into buying the A41 even before they consider its Super AMOLED or, say, camera. It is just so rare to find a compact phone these days. 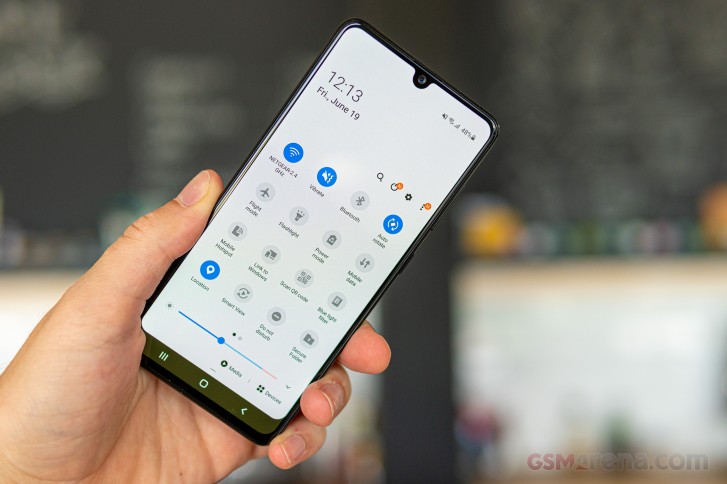 Handling the Galaxy A41 is a breath of fresh air, especially when it is coming from the maker that probably started the whole phablet thing with the Galaxy Notes. It is a small phone, easily operated with one hand, and your fingers will not be annoyingly stretching all the time. Its plastic frame provides for a good grip, and you won't continuously fear dropping it, even if it is a slippery phone.

So, yes, we liked the Galaxy A41 for its build and size, and we think many others will like it as well.

i have this phone and after every update the camera quality and phone speed gets worse. i can't take good photos of my homework for school. i have had it for almost 10 months now and i think its slowly dying. microphone in calls sounds quite wei...

I got samsung A41, for games its perfect. PUBG runing on 45 fps Brawl Stars 60 fps and more stuffs. Camera is good but sometimes its shit idk why. I recommend u to buy it.

I actually like this phone. Its small and compact, great super amoled screen, the chipset is ok, camera is good, and the macro photos are also good. Not everyone can afford a premium flagship Phone all the time.