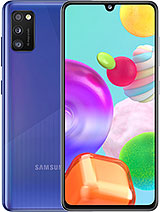 Anonymous, 23 May 2020Why there is no global version for this? Even A 40 was not avail... moreSamsung has been a such company like that for long time. If certain model does not make good profit, they push it away and concentrate on those that make good profits. For example, they did not have fun with S10e which is a decent compact phone, and I believe they would not put too much weight on A41 as long as Samsung trust that phones with bigger screen dominate the market. I am also hoping A41 to be released globaly. Would be best if they release a phone like S10e with a bit larger battery in near future though.

How is the battery life?

EIS not mentioned in spec sheet.also watched some early videos on youtube and all of them looked shaky.if this is the fact its a big let down for me.been waiting very long time for a compact midrange phone.and when i mean compact doesnt mean light on features.

Faisal Jan, 29 Mar 2020Samsung is competing with chinese brands, but in this comptetion... moreWhere you get a7 phone. I like the look of it but worry about the memory?

Why there is no global version for this? Even A 40 was not available globally. Samsung thinks that small Phones are required only by certain parts of the world? Every one is not in a position to buy high end Phones like S 10 , S 20. This kind of marketing strategy looks partial. I used Note 2, Note 3, Note FE, but now I have shifted to Huawei.

Does someone have it already? Could you describe first impression, maybe short review. Mostly I am curious about battery life but itÂs too early I guess

Adul Al Salami Kebab, 20 May 2020A Mediatek chip? In a Samsung phone? What?! Well now they just n... moreAt least it's better thant that exynos 7904 garbage.

One of the best phone.

matthew, 14 May 2020I am looking for compact phone with good battery life and I real... moreNo, only a small footprint. Will get below avg. performance.

Disappointing to use eMMC instead of UFS storage.

A Mediatek chip? In a Samsung phone? What?! Well now they just need to make one with a G90 or G80 and I am willing to consider buying one. :D

Guys, any info regarding gyro-EIS for video?

ABC, 17 May 2020Only in Japan version : ( Global version without IP68.No IP68? Good to know, will buy something else, because was waiting just for this information.