We are fans of what Samsung is doing with the Galaxy A series design. It surely knows how to make each Galaxy look not only look pretty but also unique. We don't think we've seen another phone that looks anything like the Prism Dot Black pattern on the Galaxy A42 5G back. 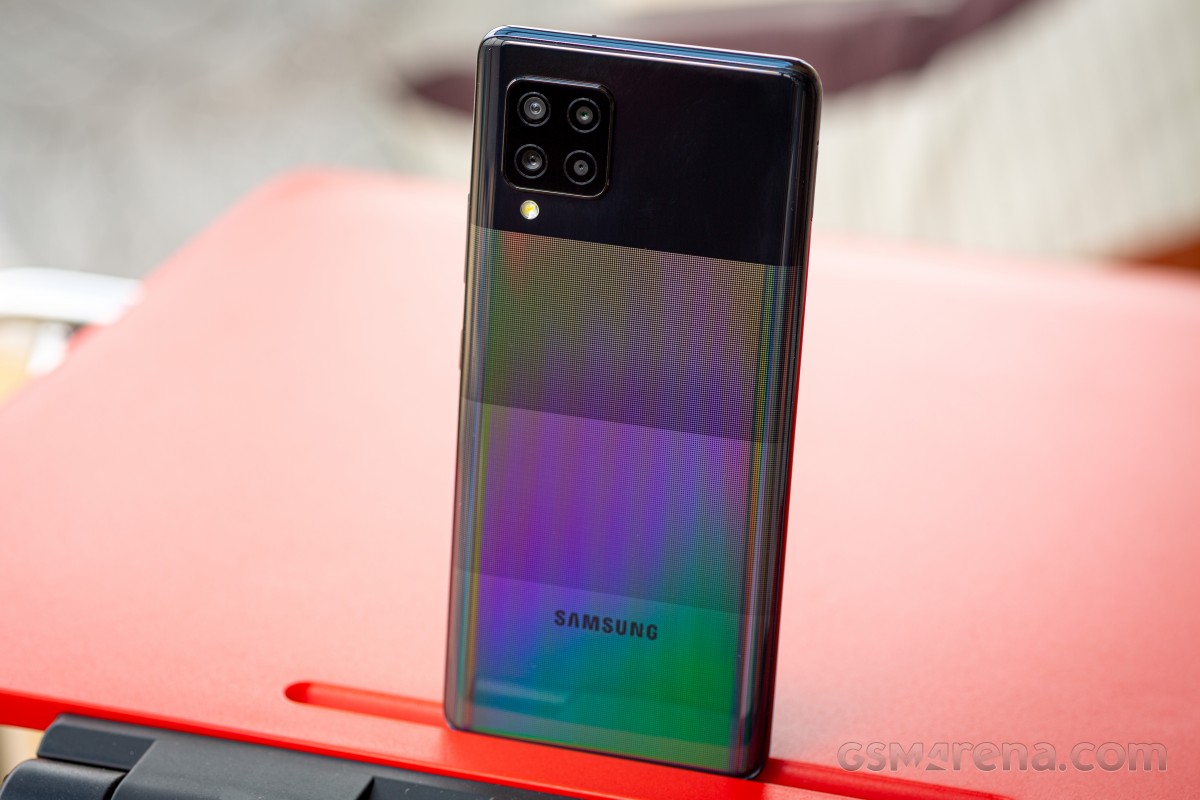 The back is an enthralling geometric masterpiece. No matter which Prism Dot version you get, the panel will be separated visually into four parts, starting with darker white/gray/black color at the top and going towards lighter hues to the bottom. All but the top stripe have this cool dotted pattern and refracts light in a rainbow-like fashion. We are fans of this design. 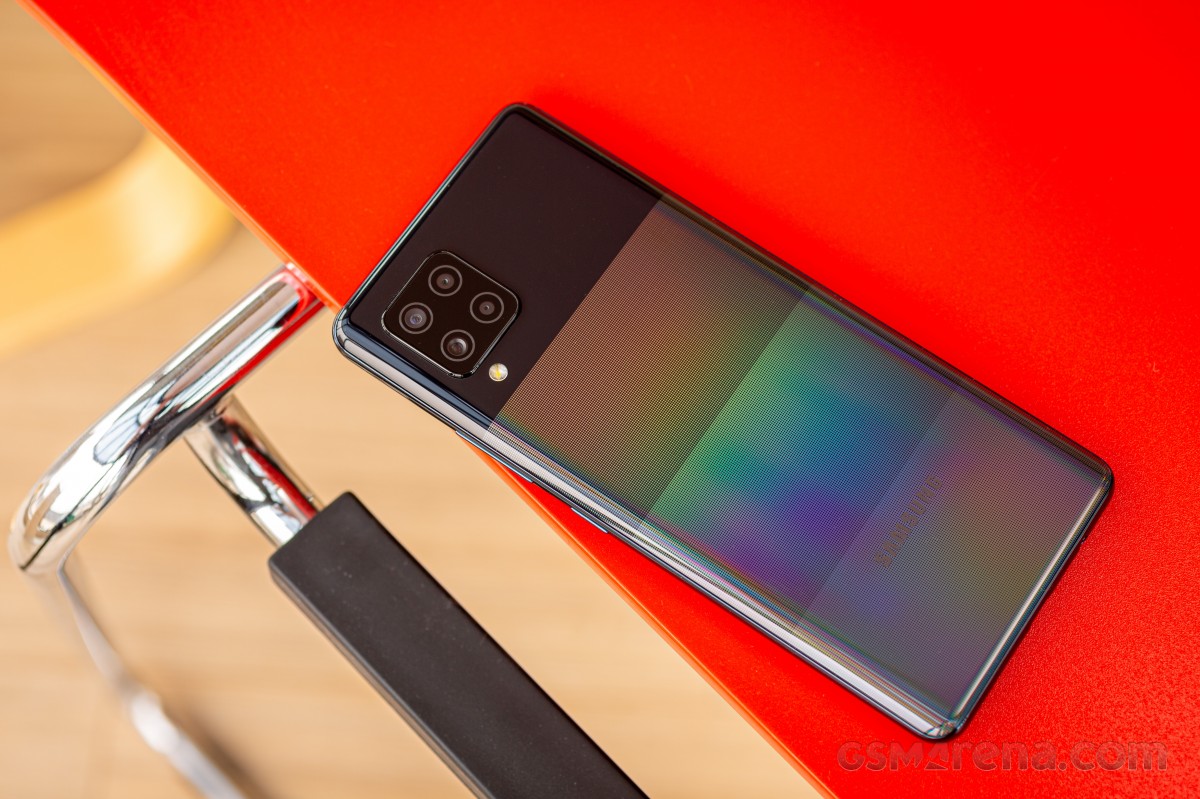 The cool back panel aside, the Galaxy A42 5G is a traditional smartphone through and through. There is a large flat screen at the front, a thin curved glossy frame on the sides, and a slightly curved and glossy rear piece of plastic. The frame and the back are made of plastic. 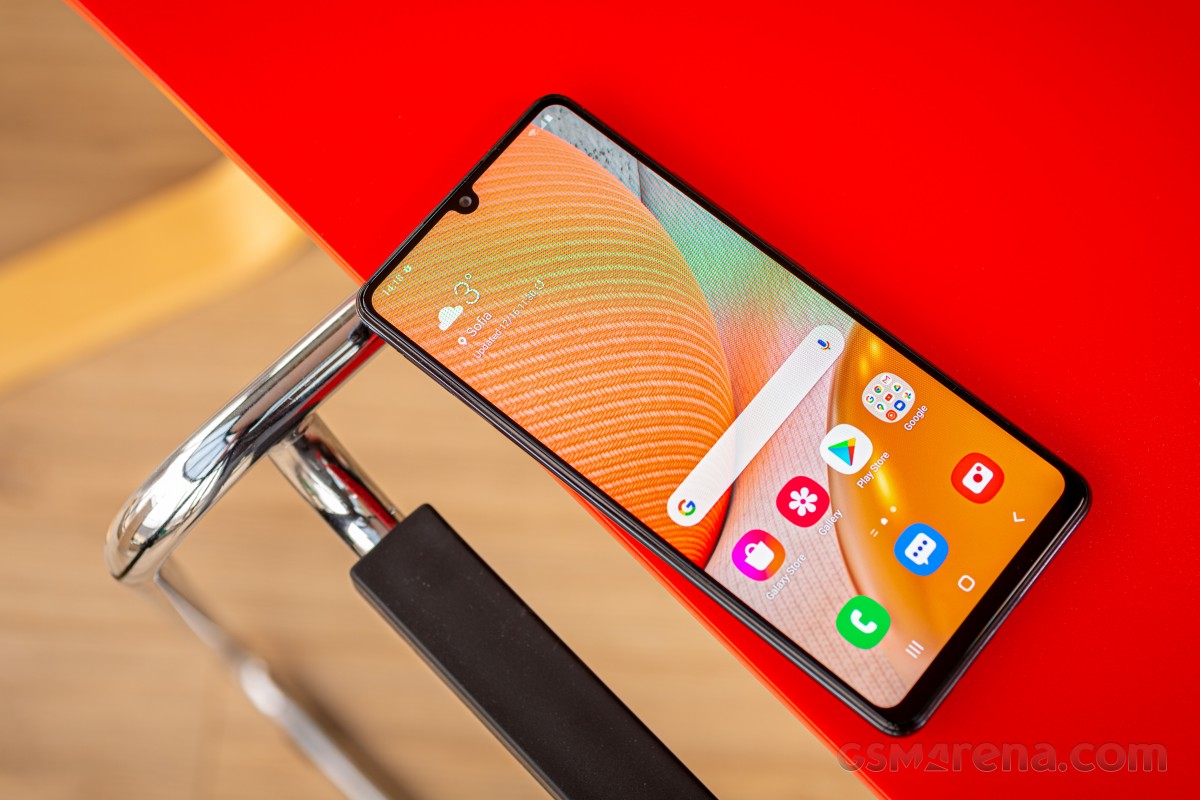 The 6.6" Super AMOLED screen is one of the big changes since the A41 and A40 models - it is much bigger and yet with lower HD+ resolution. The waterdrop-shaped notch stays the same, making way for the selfie camera. 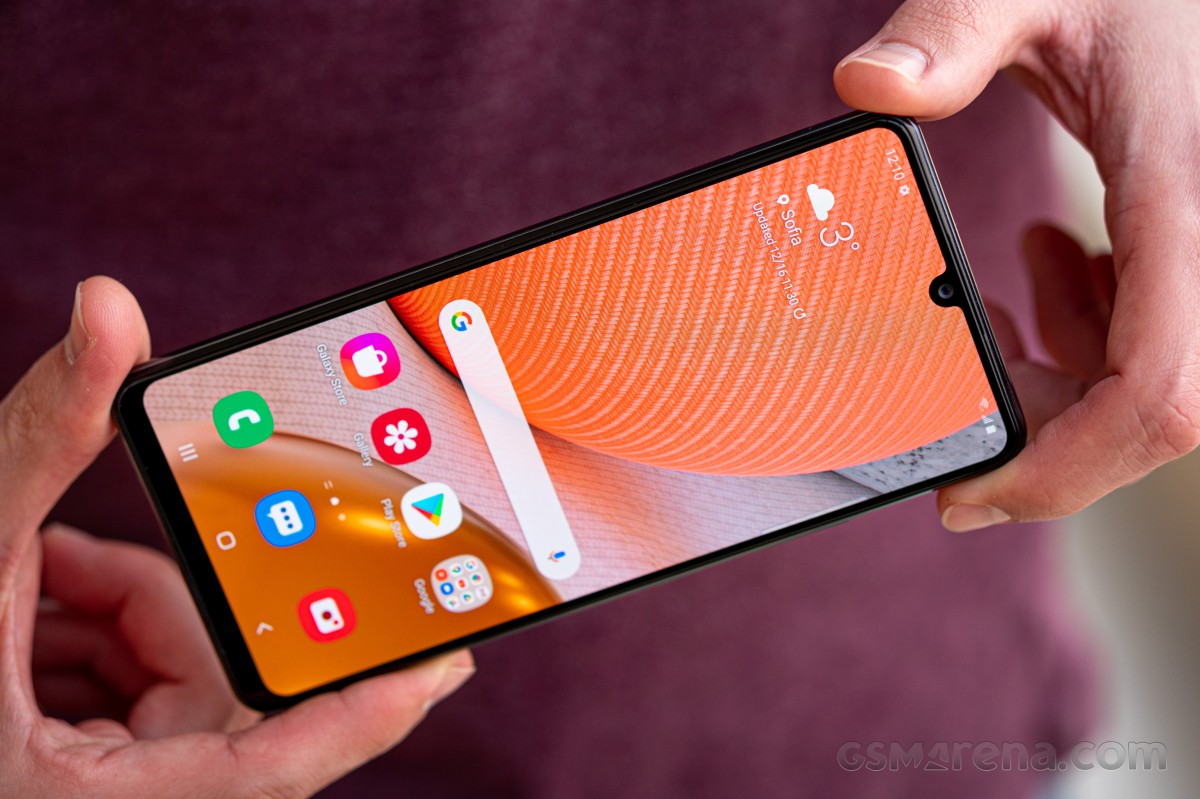 The earpiece grille is almost invisible above the front camera, etched on the frame itself. 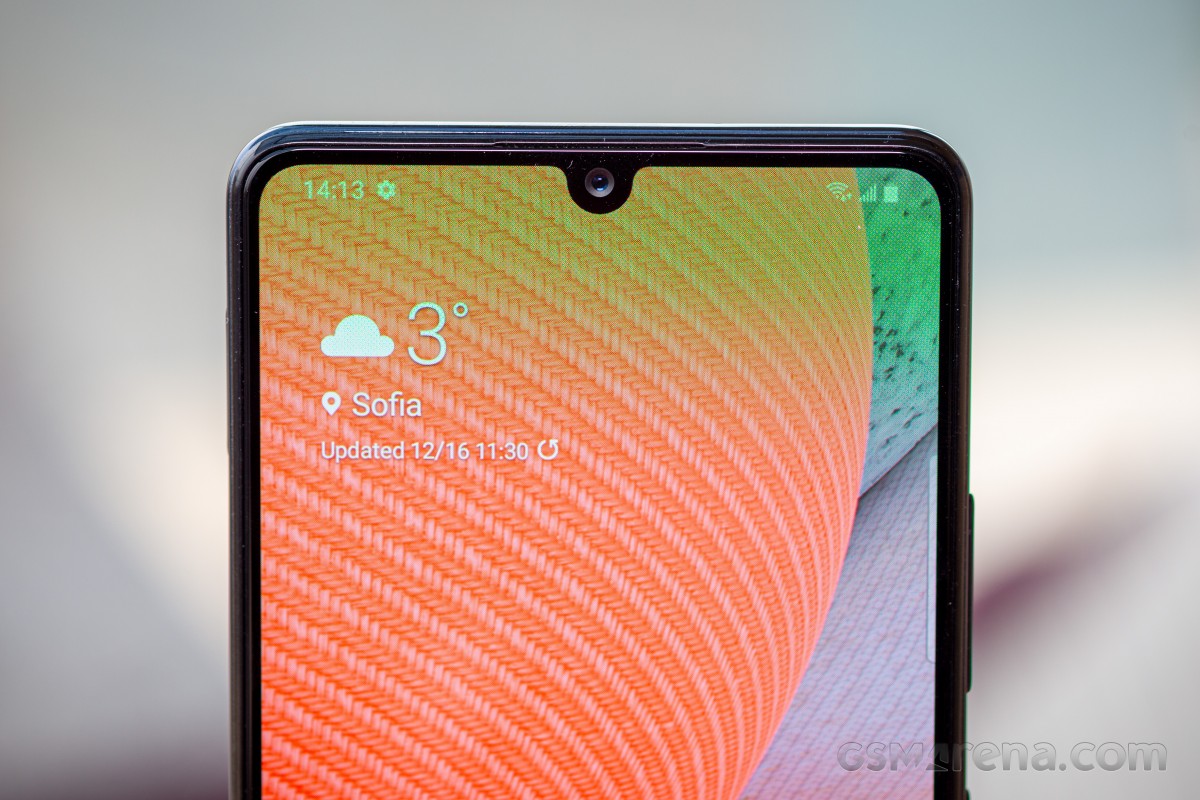 The screen has nicely thin bezels though the chin is a bit unusually thick for an OLED. Still, for such an affordable phone, we won't be making that an issue.

The fingerprint scanner is hidden under the screen, around the bottom part. It's working pleasantly fast and is as accurate as this type of sensors go. We didn't have any issues using the piece. 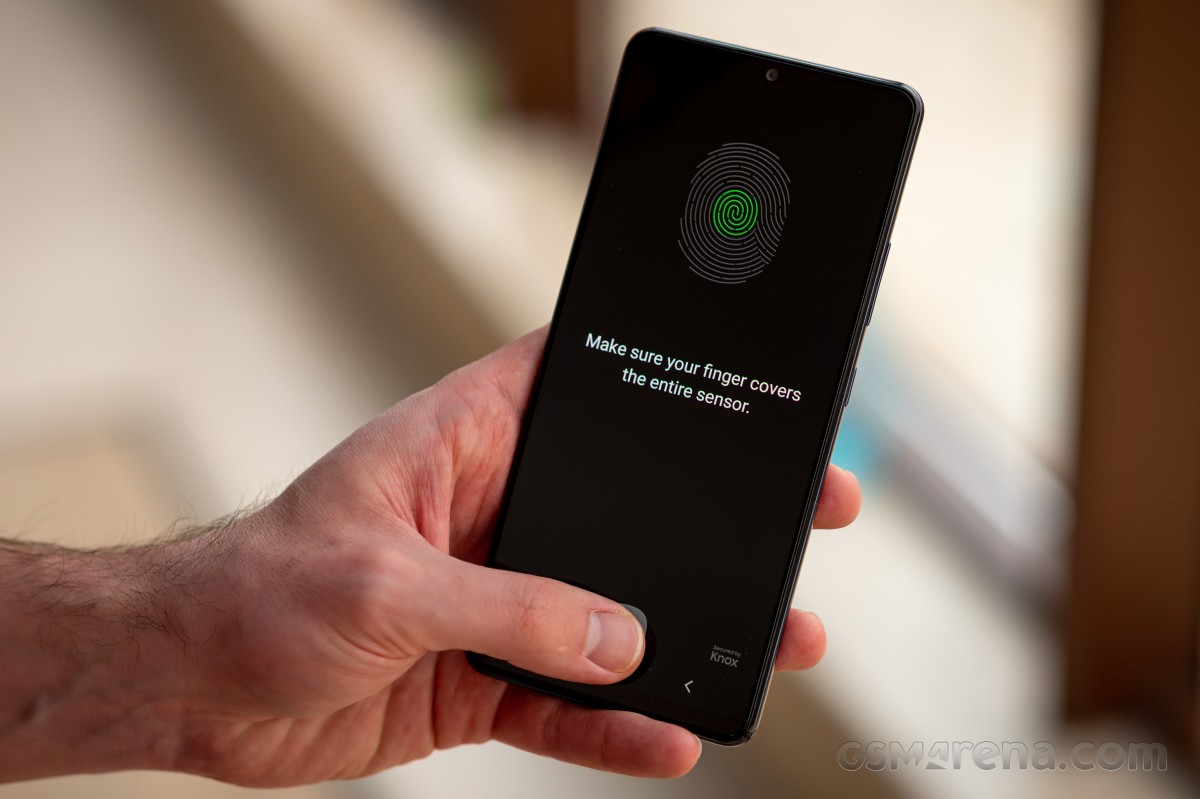 The back panel is slightly curved, and besides its cool look, the square camera setup is the only thing of interest here. It contains the 48MP primary, the 8MP ultrawide, the 5MP macro, and the 5MP depth sensor. The LED flash is outside of this arrangement. 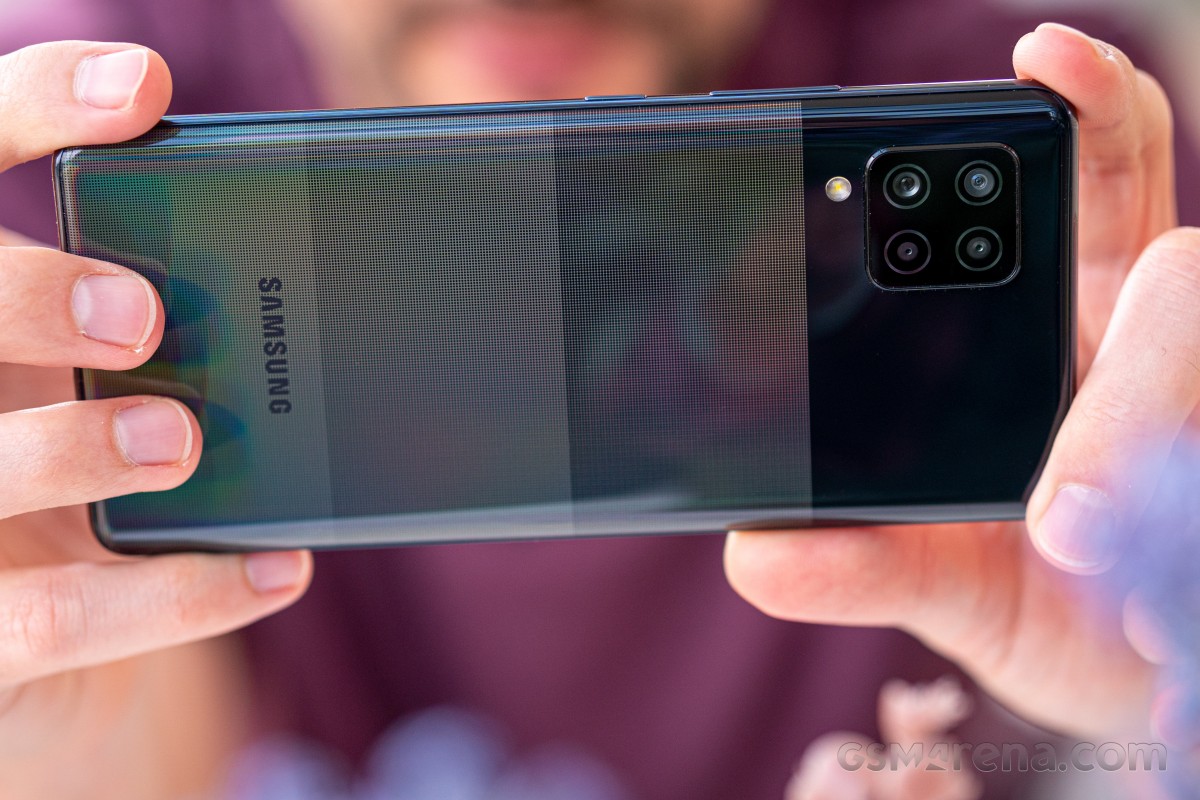 The camera glass is jutting out a bit, but it doesn't make the phone wobble when lying on a desk.

The frame is a bit curved around the longer sides, and this shape isn't our favorite as it hurts the grip, but it's actually fine. 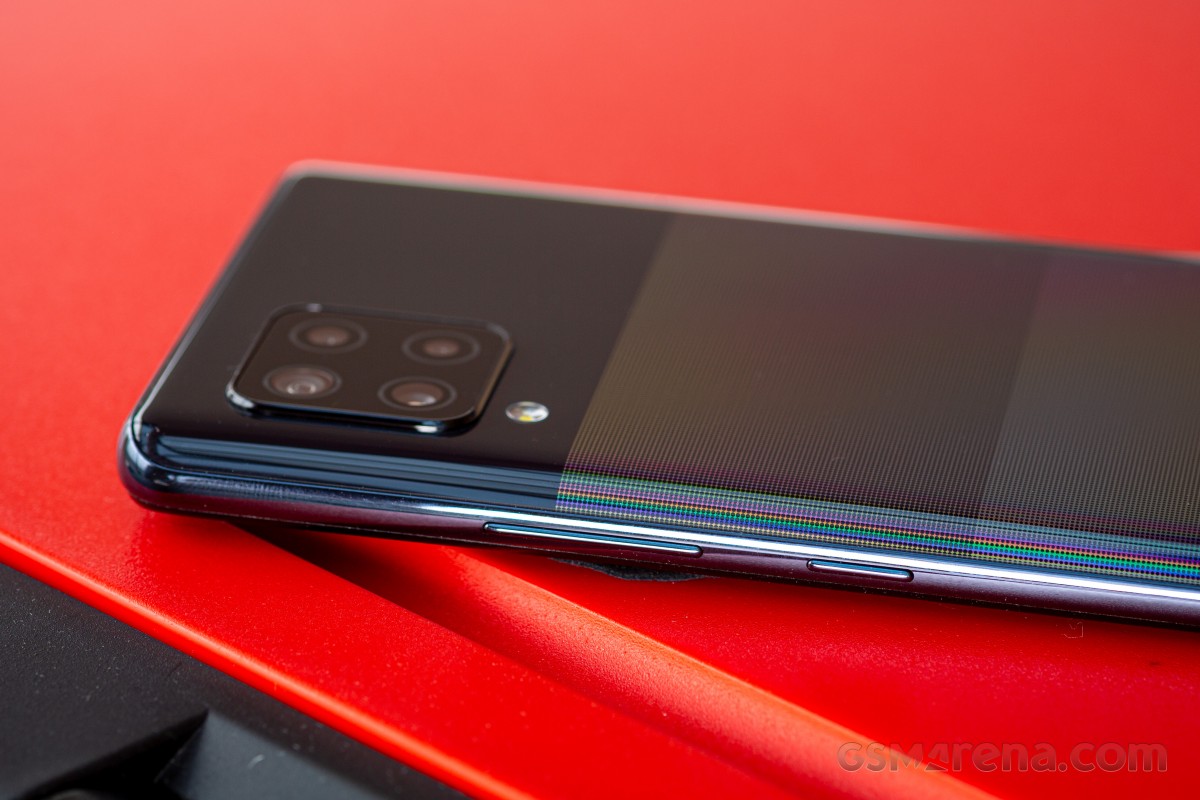 The left side of the Galaxy A42 5G contains the hybrid-SIM slot, while the volume and power/lock keys are on the right. 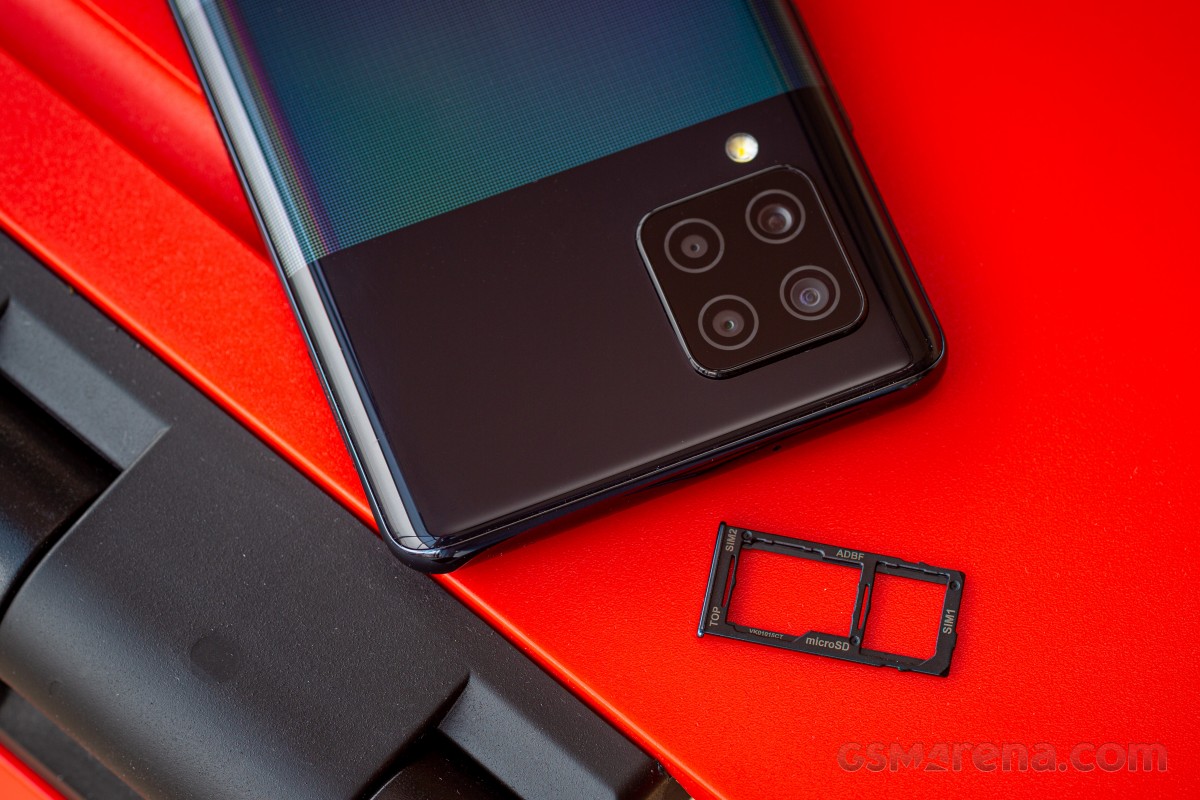 There is nothing but a mic on the top. The bottom houses the 3.5mm jack, the USB-C port, the mouthpiece, and the speaker. 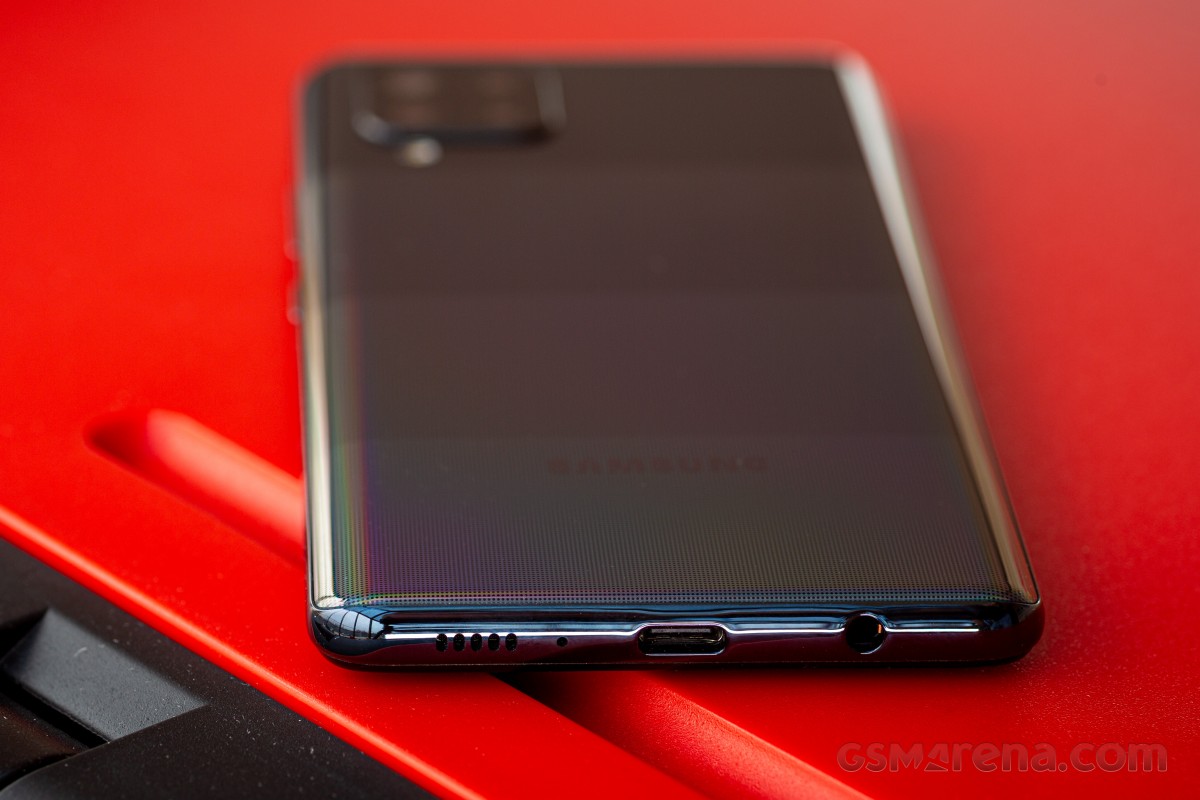 The Galaxy A42 5G phone has fascinating looks, and many will appreciate them. The grip isn't that bad as on some competitors, even if the phone is all glossy. Despite the curved frame and back, there is just enough adhesiveness to make the phone feel safe when handling it, no matter the orientation. Unfortunately, the all-glossy body is a massive fingerprint magnet. Everything sticks on the Galaxy A42 5G, and the good looks are ruined quite fast. The phone is easy to clean, and you'll need to do it often or the smudge fest becomes unbearable eventually.

I didn't get a protective cover with mine

Hardware isn´t everything yes. But I have to agree. This is ridiculous. At least they could`ve changed the 720p Screen with an 1080p one...

I like this 5G configered/4 camera, 128G phone and plan to buy two more as gifts for relative who are being ripped off in the States. Thank you Samsung.