Samsung Galaxy A50 gets improved battery charging with latest update

Samsung is pushing out a new firmware for its Galaxy A50 which brings an improved battery charging algorithm paired with refined fingerprint reader performance and the usual stability tweaks. The new firmware bearing the A505FDDU2ASH3 name weighs in at 320MB and also brings the August security patch. 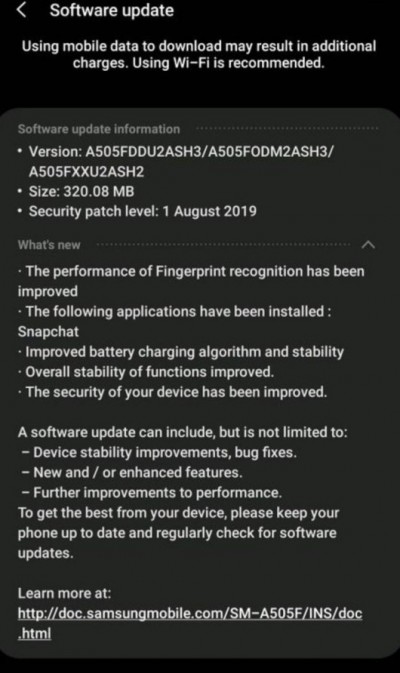 In a surprising twist, Samsung also appears to be pre-installing Snapchat as part of this update. Recently, the Galaxy A70 also got some third-party apps with an update to the surprise of users. It was reported that the apps could be uninstalled but we’ll have to wait and see if the option is available now.

The new update is currently available in India and is expected to make its way to more countries in the coming weeks.

Watch the Samsung Galaxy A50 get tortured on video

Samsung Galaxy A50 gets camera improvements and July security patch

My charging speed become slow ....after patch update can any one help in this regard

after this update my phones charging speed has become slow..it takes more than 2 hours to charge up...and before this without fast charging option it was charging up quick..approx 1hour 45 minutes can anyone please help me out..whats going on?