Samsung Galaxy A50 gets Wi-Fi certified, inches closer to launch

Samsung's upcoming Galaxy A50 is getting closer and closer to its release. It's now been certified by the Wi-Fi Alliance, with the model number SM-A505FN/DS. That's the dual-SIM version of the phone that went through Geekbench last month with an Exynos 7 9610 chipset on board, paired with 4GB of RAM. 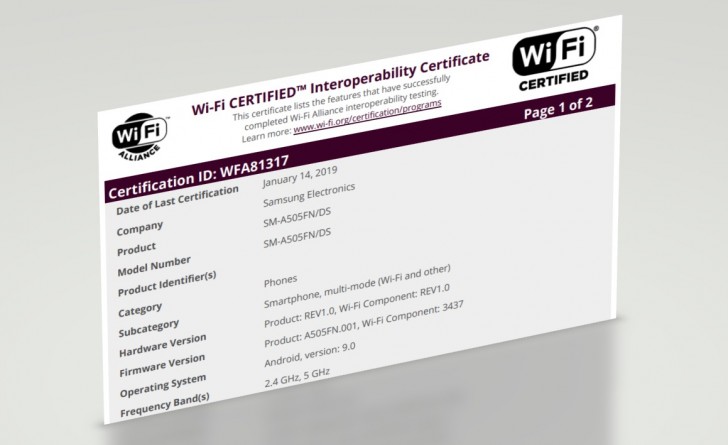 The A50 should have 64 or 128GB of storage as well as a 4,000 mAh battery and launch in blue, pink, black, silver, and white. The Wi-Fi certification has confirmed that it's running Android 9 Pie. This means it may be released after the S10 family, since Samsung usually preloads new Android versions on its flagships first.

The A50 has been rumored to pack a 24 MP main rear camera, and it may also get wireless charging and an in-display fingerprint sensor. Speaking of the screen, it is said to be of the LCD variety.

That is something I dont know

Yeah, but why though? Other companies don't cut as much corners, like Oppo, Vivo, Honor, and Xiaomi. Granted, Xiaomi and Oppo both always have been going for the lower end, but Samsung is gonna need something to set it apart from the rest

They are cutting cost because of rising competition