The Galaxy A51 5G might be just one G up from the A51, making it sound like it's got upgraded internals only, but in fact Samsung's improved the build quality as well. Where the original A51's frame was plastic, the 5G model swaps that out for aluminum. And since we have a bunch of lower-end Ax1 handsets around for immediate comparison, we can tell you that the A51 5G does have a more upmarket look and feel than those. 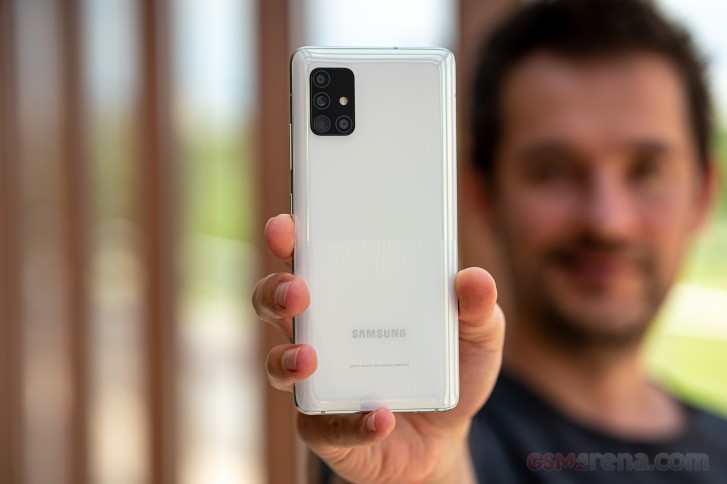 Samsung doesn't specify the material used on the back of the A51 5G, and we're inclined to call it plastic. The A51 5G's rear panel has less flex than, say, the A31's and if we were to have Mohs picks handy (and if we did destructive testing in the first place) we could have placed the different A-series phones on different levels on that hardness scale. 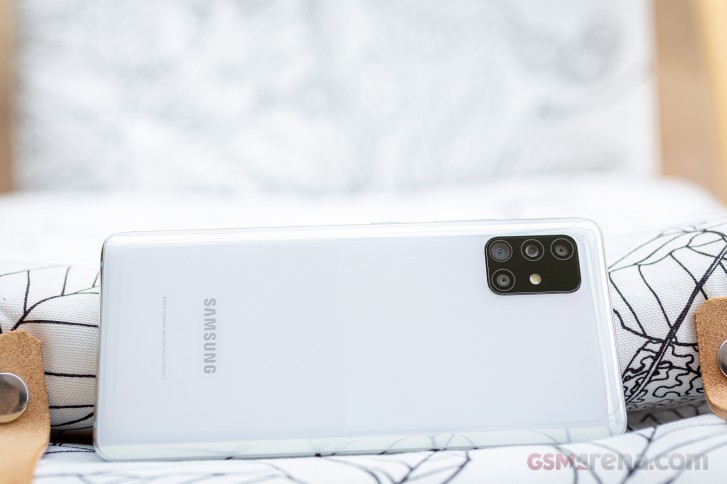 The A51 5G's back comes with a reimagined finish too. What were seemingly arbitrary intersecting diagonal lines splitting the rear into 4 distinctly textured areas, have now been aligned parallel to the X and Y axes. A vertical border divides the back 4-to-1, the right having a solid color, the left vertically striped.

Then, somewhere below the midpoint, the angle of reflection of light changes, and under the right conditions, you can see once again four ever so slightly different portions on the A51 5G's back. It's all a lot more subtle than we can ever manage to put into words. Our review unit is in the Prism Cube White colorway, but the Prism Cubes also come in Pink and Black, with the same underlying design. 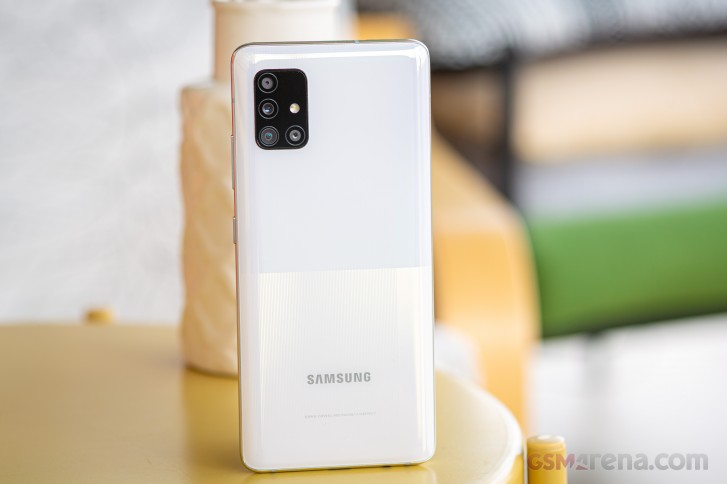 As is typical for 2020 Samsungs, the camera cluster is in the top left corner, all the modules and flash nestled behind one big window. The whole assembly sticks out ever so slightly, not enough to cause any significant wobble if the phone is placed on a flat surface. 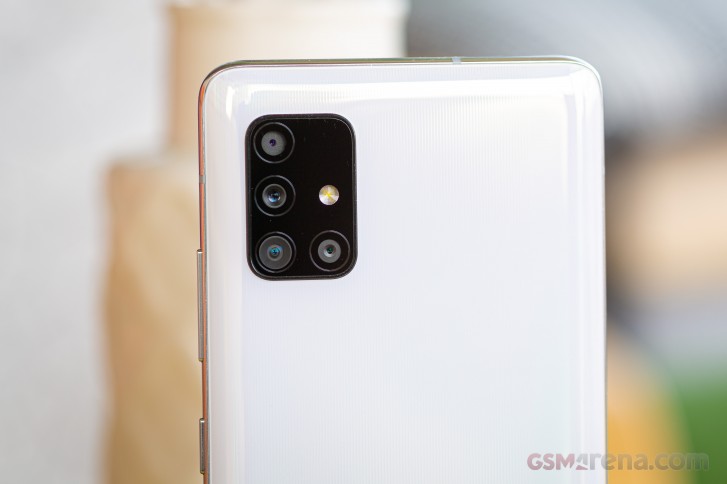 Flip over to the front and there's barely any change compared to the A51. A 6.5-inch Super AMOLED is the star of the show and it's of the Infinity-O variety - so a punch hole for the selfie cam as opposed to a notch. Perhaps the reflective ring around the cam draws unnecessary attention to an already not universally liked design element, but as punch holes go this one is on the small side. 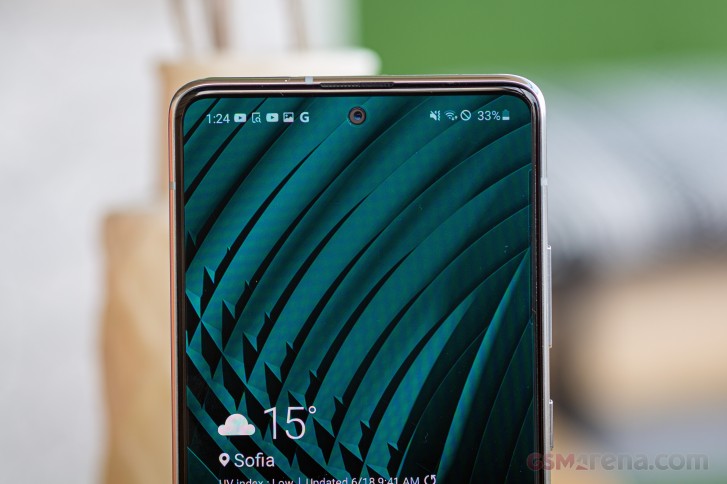 The bezels around the display are nicely thin, not Galaxy S20 thin, but thin anyway. It may bug a particular type of person that the chin is slightly meatier than the top bezel, itself somewhat thicker than the sides, but we're trying to move past such petty complaints. 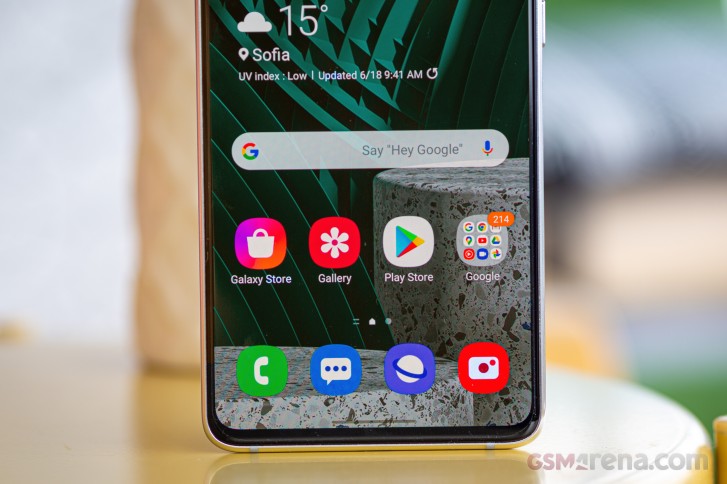 The control layout is the same one that Samsung adopted after scrapping the dedicated Bixby key. The power button is still technically a 'Side key' and can have some Bixby functionality, but you can disable that in settings. On the A51 5G, it is placed on the right, just above the midpoint, the volume rocker above it. The buttons are well-positioned and have a very solid click action. 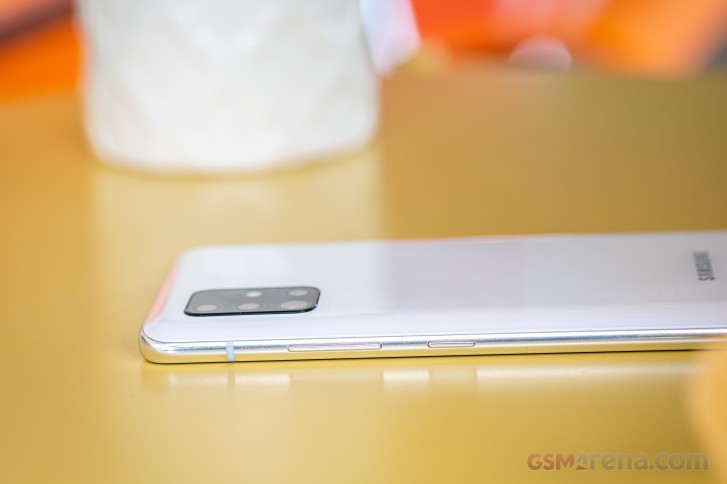 The top of the A51 5G is home to the card tray, and, unlike the 4G A51, the 5G version doesn't have a dedicated microSD slot. Well, ours is a single SIM unit, so the memory slot is dedicated in a way, but on dual SIM variants, you'll be forced to choose whether to put in a second nano-SIM or a microSD card. Also here is the secondary mic.

Down on the bottom of the A51 5G you'll find the USB-C port, the headphone jack, loudspeaker and primary mic - typical bottom-of-a-phone stuff. 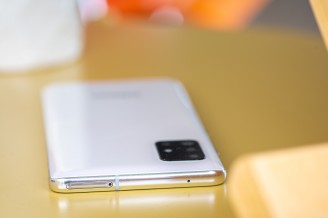 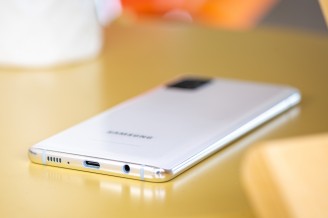 Card tray up top • The usual accoutrements on the bottom 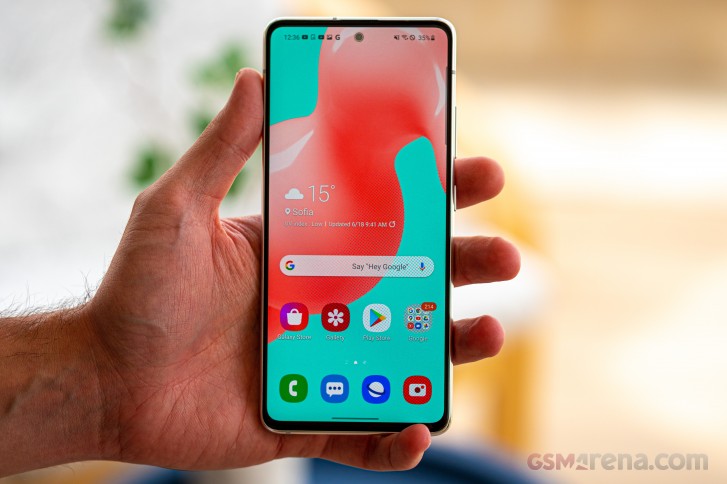 a link to the price please thanks

None of the rear cameras have optical image stabilization ois

Well, you're right Exynos doesn't even belong in the league. As for S20's 865 version, I can attribute this to battery saving attempts by Samsung, given that they're already having a tough time with 120Hz displays and battery li...