Samsung is really working hard to make the Galaxy A series desirable, not just as a better value proposition but also visually. Hence, the trendy new re-styling, spearheaded by the Galaxy A72 and A52. These devices' marketing is clearly targeted to the young Gen-Z crowd, mainly with a creative and social angle. 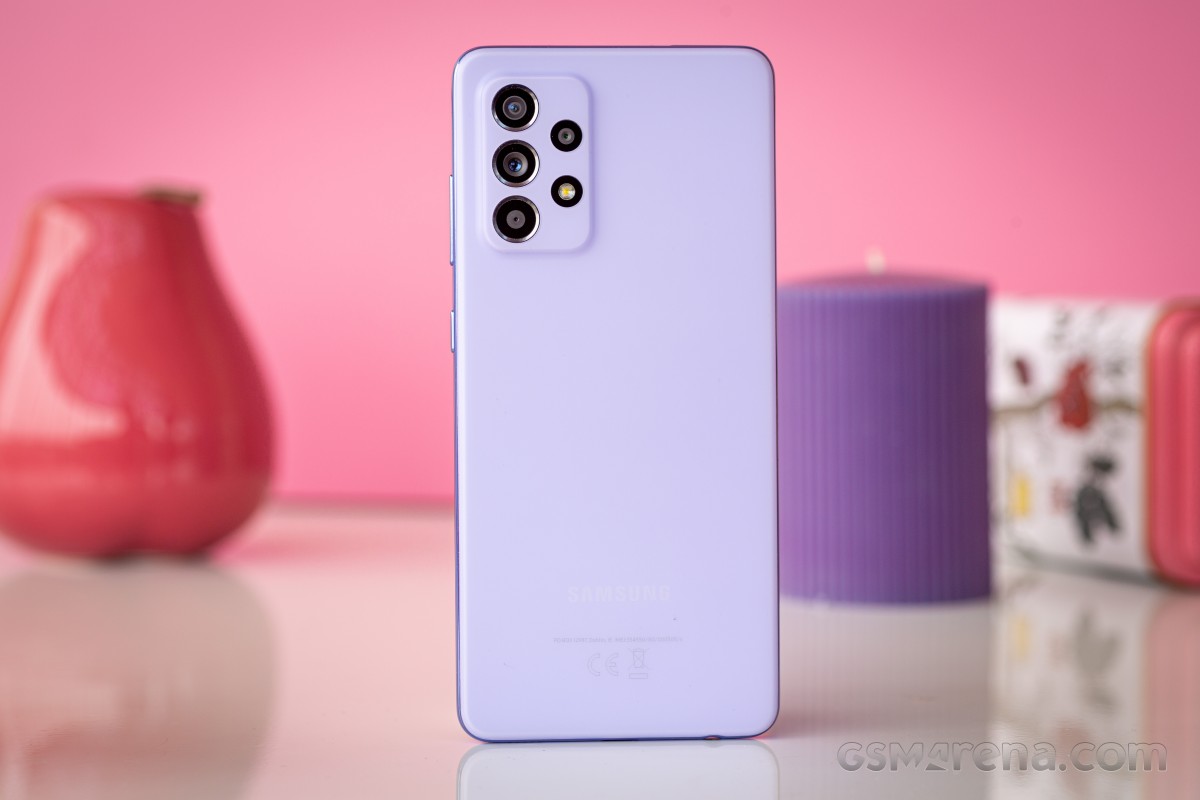 The new design mainly focuses on the rear panel, which now features a soft and silky finish, almost like a vinyl skin. It is available in Awesome Black, Awesome White, Awesome Violet and Awesome Blue.

"Awesome" is sort of a marketing cornerstone for the A32, A52 and A72 with Samsung really hammering-in the models' "awesome battery, display and camera" and the "Awesome is for everyone" slogan. But, we digress. The Violet unit we have is both quite eye-catching and manages to leave a lasting impression when held in hand. The actual feel is sort of smooth and rubbery but also slightly silky. It is very particular, and we recommend trying it out for yourself before committing since the reactions around the office to it were varied. 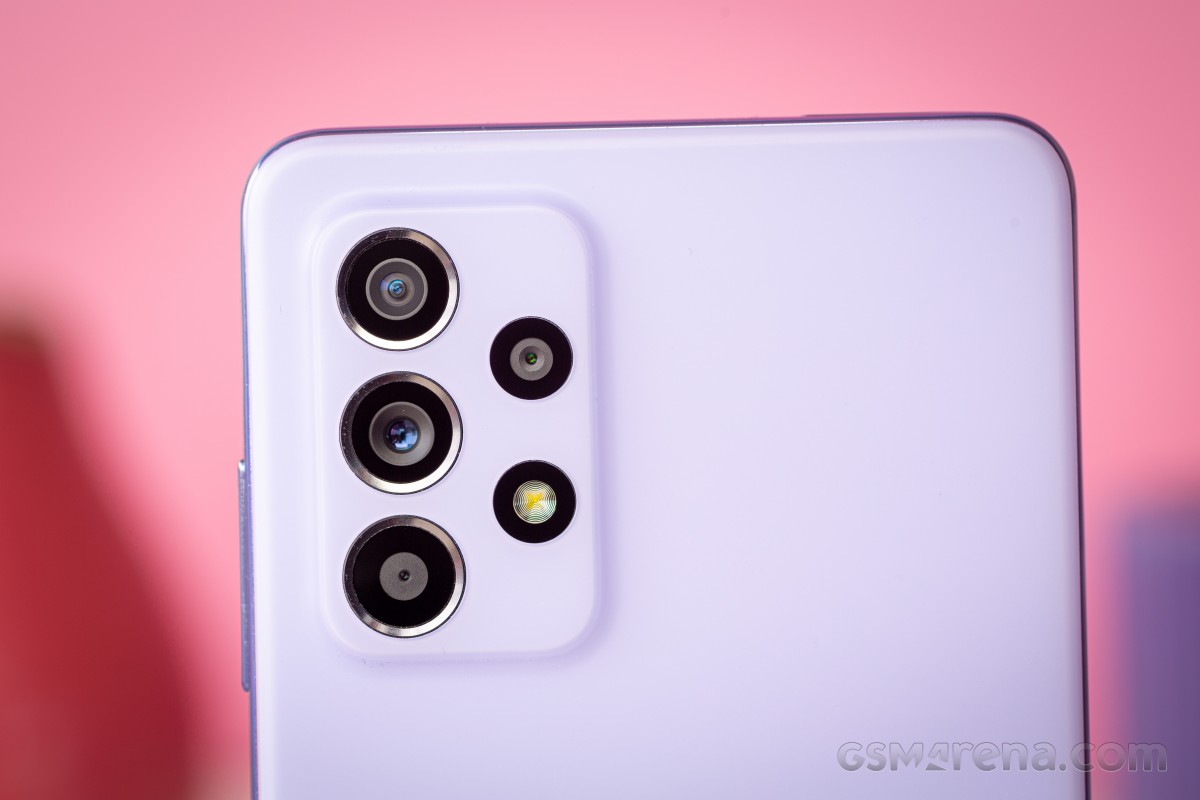 The shape of the rear panel is also a bit particular. It sort of tucks into the phone's middle frame at a slightly more-aggressive angle, leaving behind a bit of a lip. It's neither better nor worse than the gradual slope found on most other glass or plastic back handsets. Just a bit different.

Despite its particular outline, the main camera island on the Galaxy A52 is clearly inspired by the original design language of the Galaxy A51, with clear inspiration for accents also being drawn from the Galaxy Note 20 family.

In terms of construction and materials, the Galaxy A52 feels well-made and solidly put together. It's not a particularly hefty device, but it is still a bit thicker than its predecessor, measuring 159.9 x 75.1 x 8.4 mm and a bit heavier at 189 grams. The middle frame is plastic and that's our best guess for the rear panel, as well. The display gets Gorilla Glass 5, which is upgraded from the Gorilla Glass 3 on the Galaxy A51. Another major upgrade in this department is the IP67 ingress protection rating. This is a first for the Galaxy A family and very much appreciated.

There is nothing particularly special or unorthodox about the control layout on the Galaxy A52, which we can't complain about. It's great to see that the 3.5mm audio jack is still present and accounted for on the bottom of the phone. Next to it - a Type-C port, with a USB 2.0 controller behind it, with OTG functionality. And next to that - a single bottom-firing speaker. 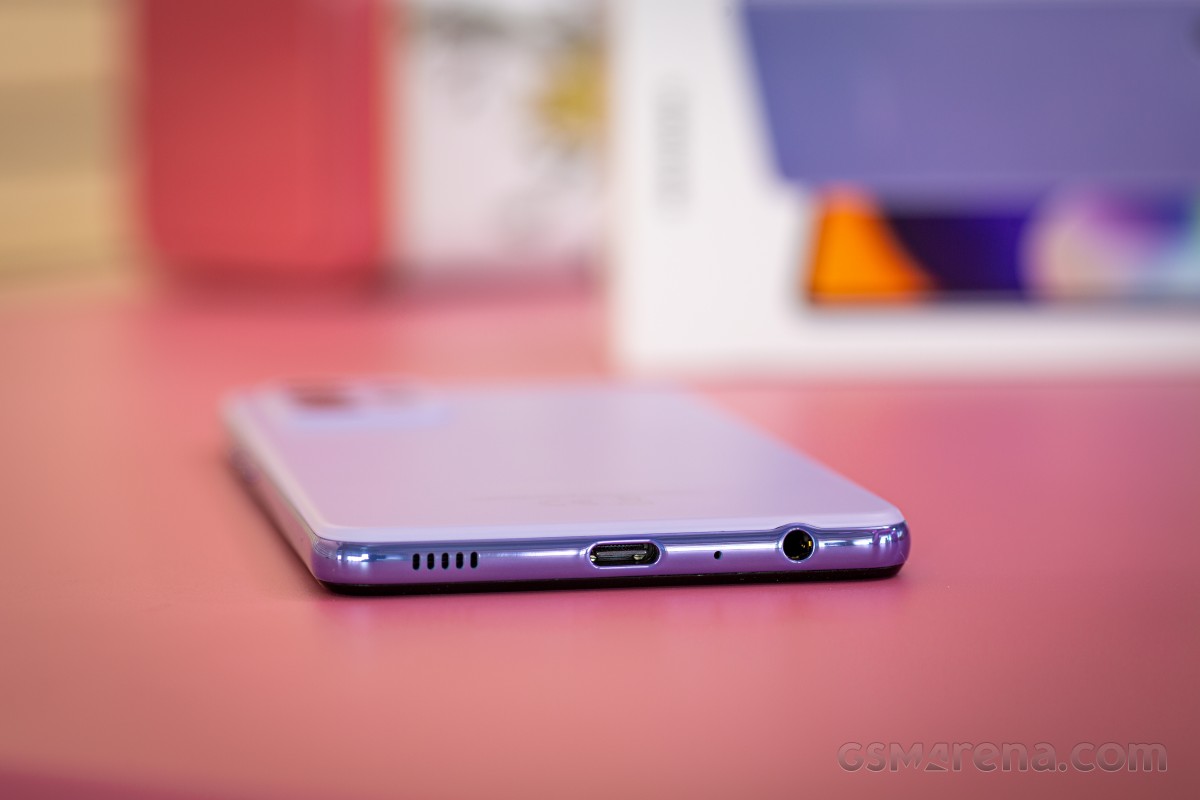 The newfound stereo loudspeaker setup on the Galaxy A52 is a hybrid one, with the earpiece pulling double-duty as the second channel. That leaves to top side of the device mostly empty, only housing a secondary noise-cancelling mic and a Dual Nano-SIM card tray. It is also a hybrid affair, with the second slot doubling as a microSD cradle, so you have to pick and choose. 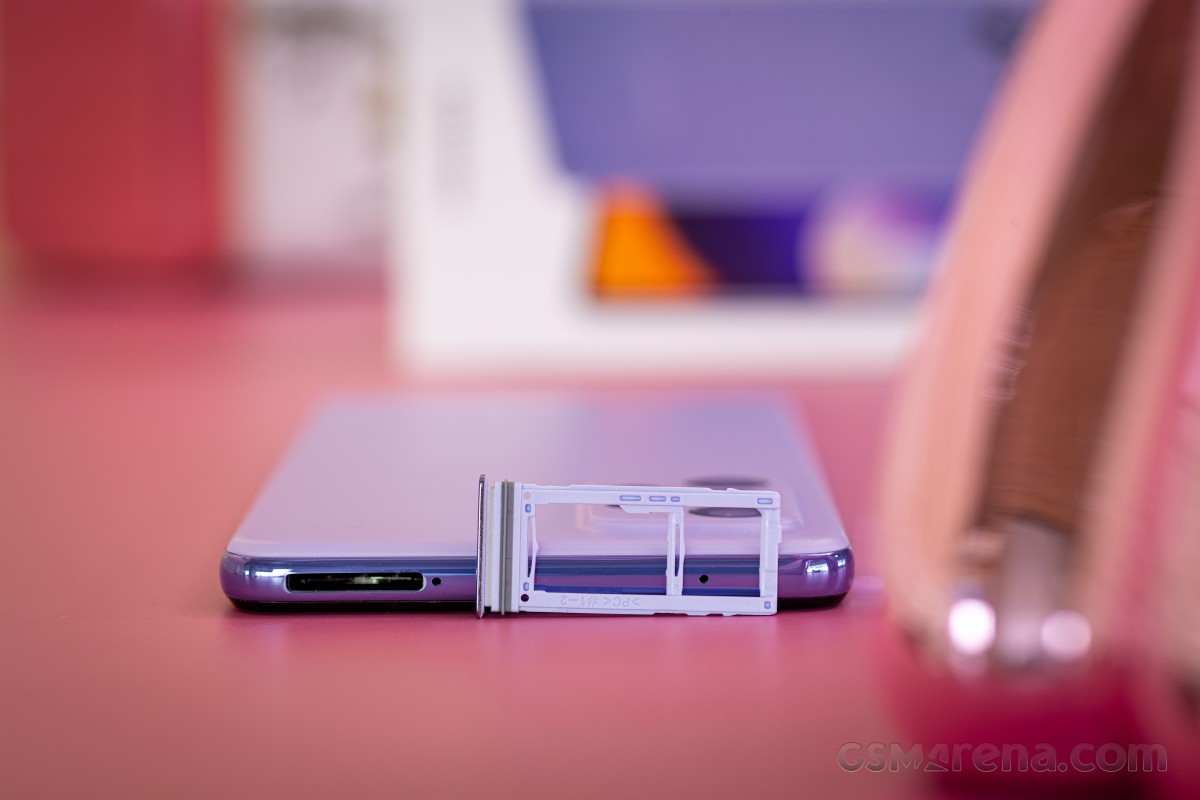 The left side of the Galaxy A52 is absolutely uninterrupted. This is one area where you can most-easily feel the plastic material of the frame itself. If you don't specifically focus on it, though, we have to say that the finish feels good and doesn't come off as cheap in any way. It is not trying to imitate metal, though, either. 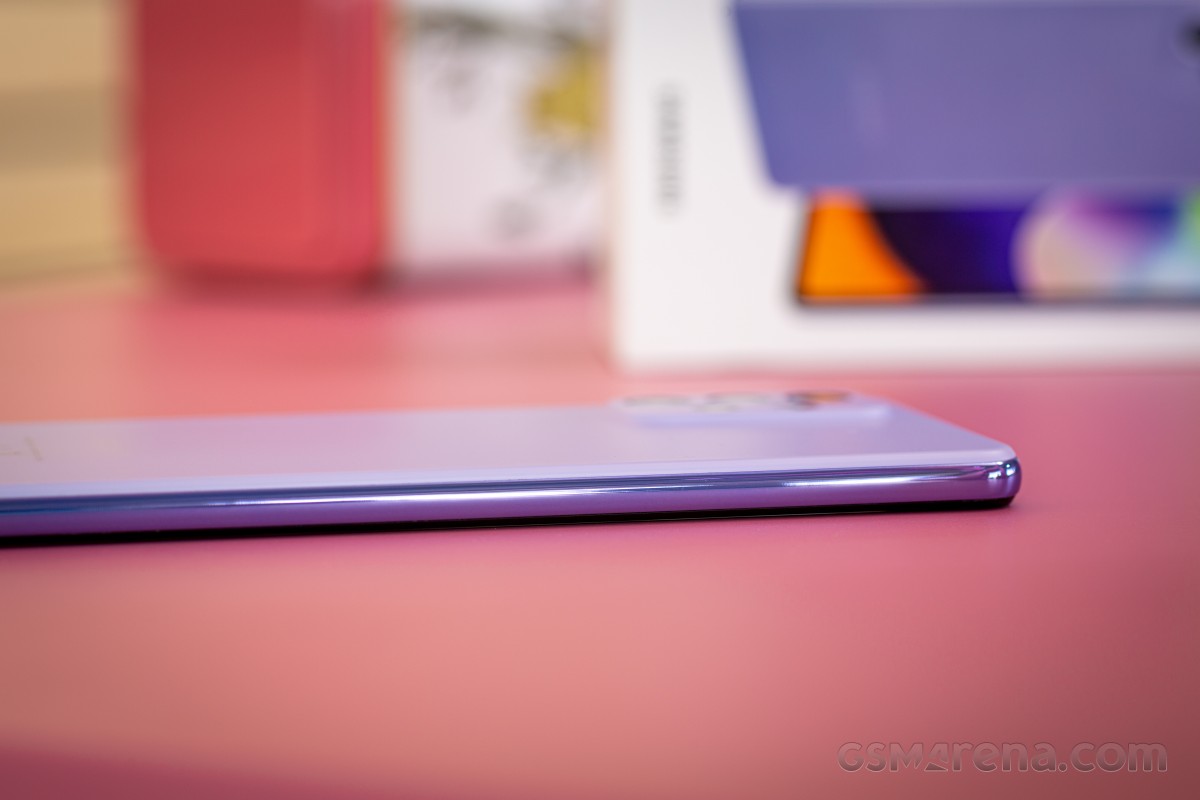 The right frame houses the power button and volume rockers. Both ergonomically positioned, "clicky" and responsive. No complaints there. 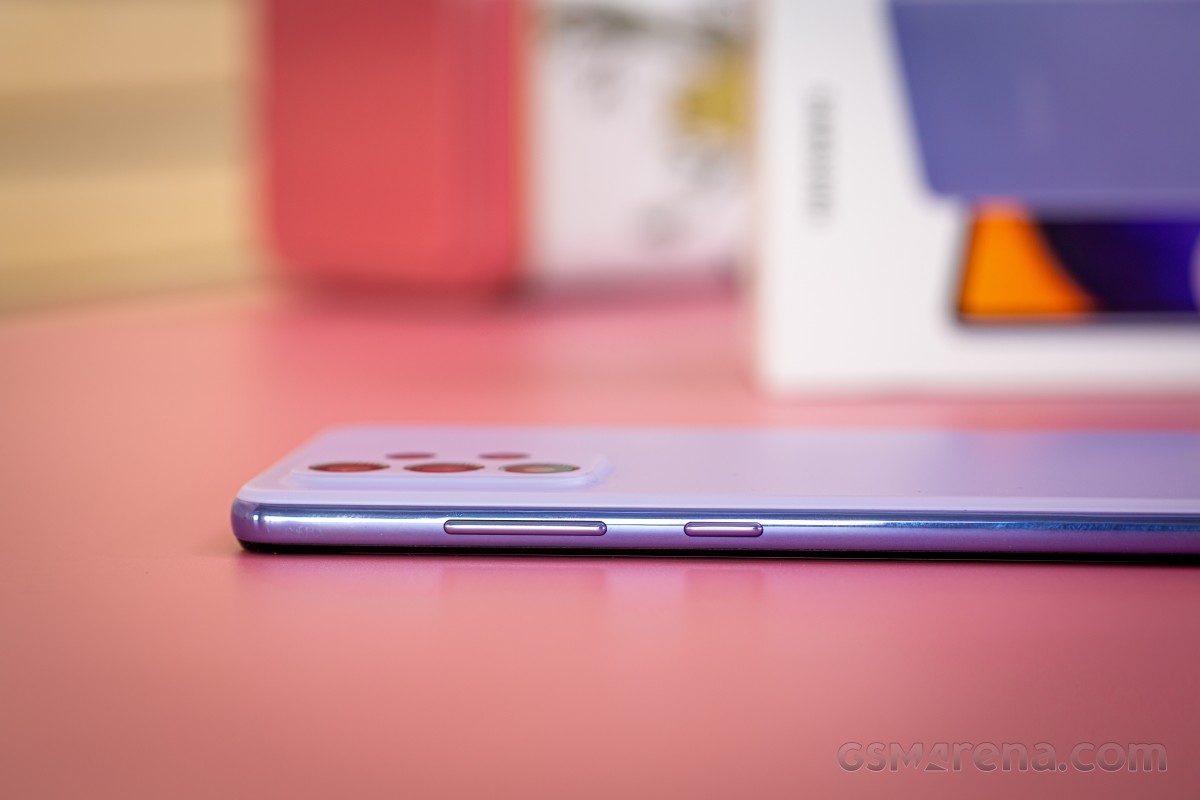 The bezels surrounding the 6.5-inch display on the front are nice and thin. They are not quite as thin as those on the Galaxy A51, but the difference is marginal, at best, in person. Plus, the amplified earpiece might have required some extra room. And also, the tight selfie punch hole makes for a modern look. 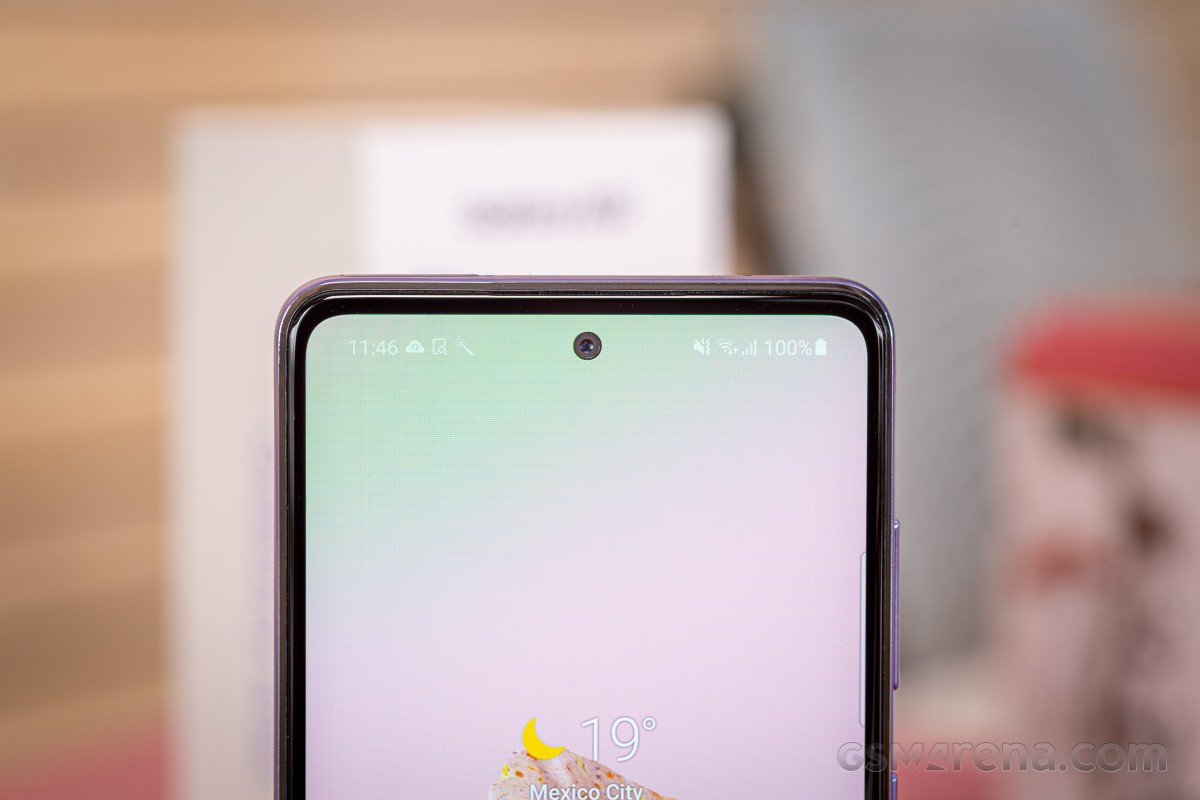 The under-display fingerprint reader on the A52 is pretty consistent, though a bit sluggish by today's standards. Still reliable enough, though. 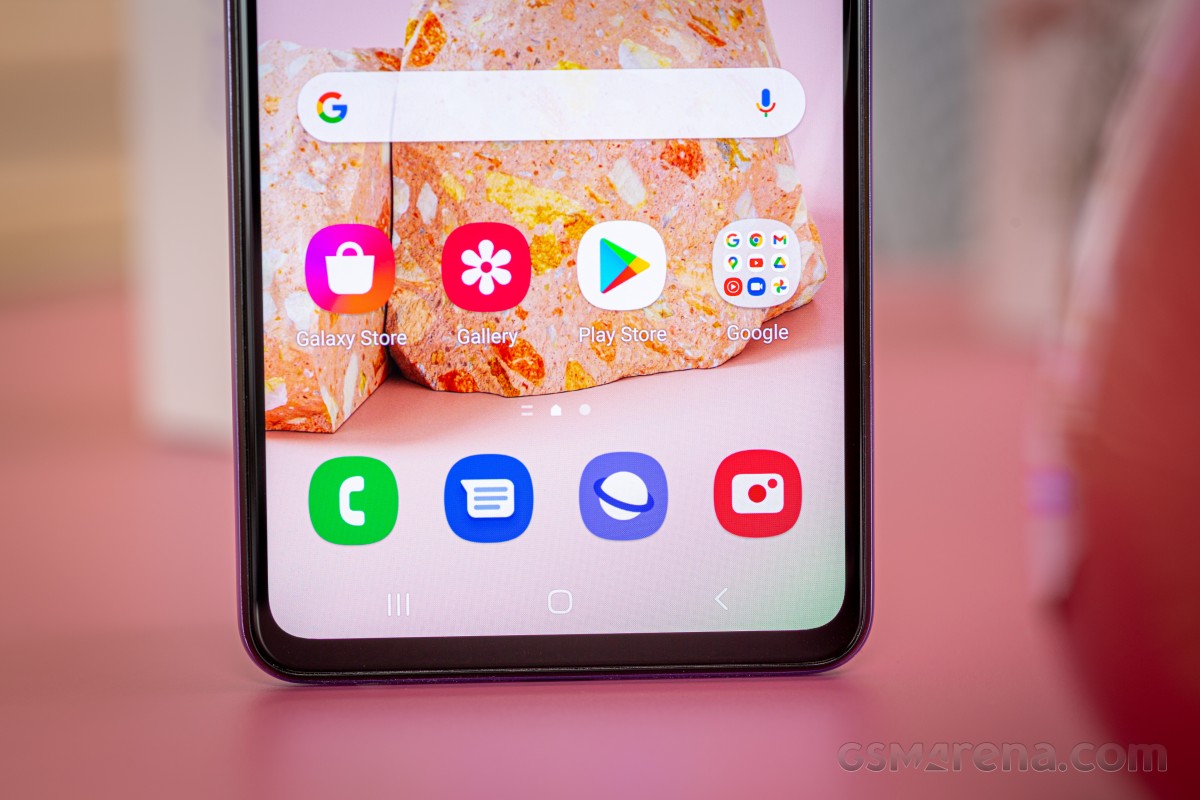 The only complaint we can think of here is the lack of a notification LED.

Mime to also after 1.5 years the back glue is melting and can open , the bad thing is yesterday i got notification ask me to update phone but after i update the new version my phone cannot start alrdy it show running at the 1st page Samsung and and...

Try the one plus 9

After being convinced with my friend, i was approaching to buy A52,but after seeing these contravecial comments,am so disappointed and forced to wait and re-think again about my choices since am not good on selecting phones (what to be my guidelines ...