The Samsung Galaxy A52s 5G was unveiled last week as a Snapdragon 778G-powered upgrade over the original A52 5G. It’s first launch market is the UK, but Samsung has sent out promo posters to Indian stores too, suggesting that it won’t be long before the new model arrives in the country.

That is not a huge surprise, a support page for the “s” model went up on Samsung India before the phone was even officially unveiled. The poster that was spotted in India does not list a price, but in the UK the phone costs only £10 more than the original, so we don’t expect a major price hike.

That said, the 5G version of the A52 never made its way to India, just the SD 720G-based 4G model. The upcoming A52s 5G will be pricier than that one (which starts at INR 26,500 at the moment), but it will also provide an even bigger boost to performance. 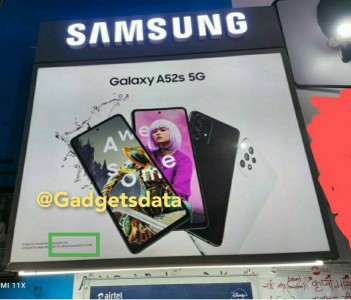 Note that besides the new chipset, the “s” phone also upgrades the 6.5” Super AMOLED display to 120 Hz refresh rate (up from 90 Hz) compared to the 4G model. The colorway selection may be limited as only the Black and White options can be seen in the poster (the A52s 5G also has a Violet and a Mint version).

Anyway, if this phone proves too costly for you, check out the Galaxy M32 5G, which will launch on Amazon India on August 25 (this Wednesday). And there is a Galaxy M52 5G in the works too (with a Snapdragon 778G, just like the A52s).

YouTube videos aren't always reliable. Most of them shoot everything on auto mode in default settings. On lot of Chinese phones, things like AI which may be turned 🔛 by default, give rise to oversaturated pics. Just tweaking these se...

They made a gud decision...i bought realme mi redmi oppo vivo...but all suck they will not survived for a year n lots of adds n bugs... Samsung ui far better n clean.. Chinese brands only show gimmick...i will never buy any of them anymore...back to ...

agree... but just that REALME on-paper specs are so enticing for a common man...