The Samsung Galaxy A60 doesn't surprise with particularly premium build but it's exactly what you'd expect from a mid-range device. Then again, a couple of Chinese competitors are going for more premium materials like glass for roughly the same price.

But on contrary to the expected mid-range build quality, it's hard to tell that this is a Samsung phone when looking it from the front. Only a handful of devices from the Korean company feature an Infinity-O display with a punch-hole camera. 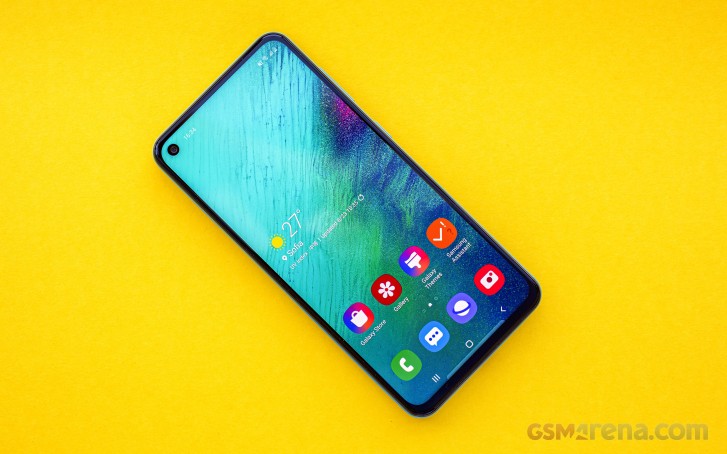 To be fair, the phone has a pretty small hole for the front camera - considerably smaller than the one on the Honor 20-series, for example. But not as small as on the Note10+. It's not obtrusive as one would think but for aesthetic reasons, not all users will like the solution. Heck, some even prefer the notches to the punch-hole camera design so unless you try it out, it's hard to make a decision which one suits you best. 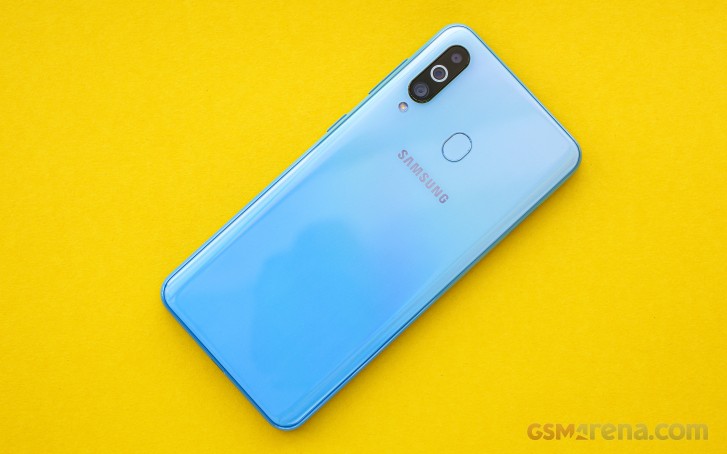 Anyway, aside from the camera hole, the phone impresses with thin side bezels, which are also thinner than the top one and the chin. It starts to get too much for OCD freaks at this point but we do appreciate the skinny bezels, nonetheless. In fact, the top bezel is so thin that Samsung decided to go with a Sound on Display technology instead of cramming an earpiece there. We talk in detail about the implementation of the said technology in the next page of the review. 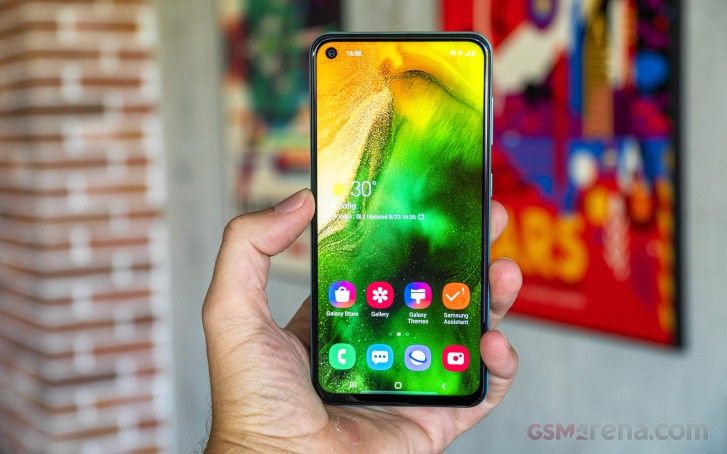 Flipping the phone around reveals a pretty nice gradient called Seawater Blue. The device also comes in Cocktail Orange, Daybreak Black and Peach Mist. To be honest, the color we got isn't the best one around - it feels like most of the Chinese competitors are doing a better job. 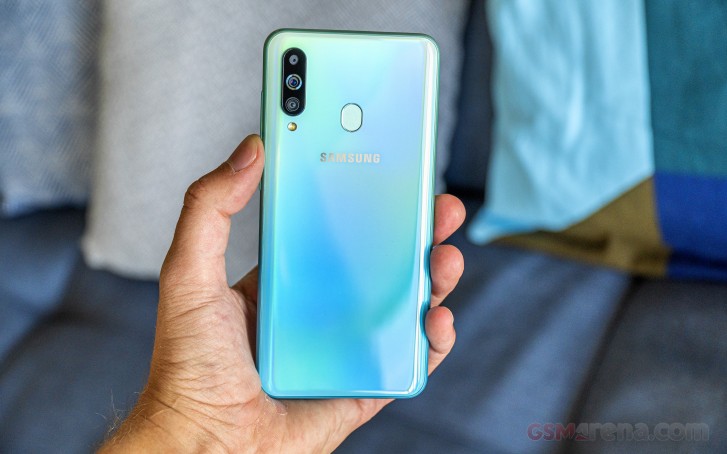 As we already pointed out, the phone doesn't use premium materials so the back and the side frame are made of plastic. Only the front features glass and Samsung says it's the good old Gorilla Glass 3. You can definitely feel the body being plastic, though, we can say it's one of the successful imitations of glass. The curve to the sides is a nice touch as it improves the grip by a bunch.

There's also small camera bump in the upper-right corner and the fingerprint reader right above the Samsung inscription. The scanner, on the other hand, needs just a little adjustment - maybe a bit lower placement wouldn't have hurt as even average-sized hands have to do some finger gymnastics.

Going around the sides, we find the SIM card tray on the left and all the buttons on the right. The power key is adequately placed and it's pretty comfortable to reach with one hand. The bottom houses the USB-C connector and the loudspeaker grille. No 3.5mm audio jack, unfortunately.

The Galaxy A60 from the sides

All in all, the device is well built with negligible drawbacks like the rather high fingerprint placement and the asymmetrical front design. But this is just us nitpicking at this point. There are no real issues to talk about here. You can still find a handset with better materials and feel from the Chinese camp for the asking price.

Take a look at the phone from all angles using our 360-degree view tool.