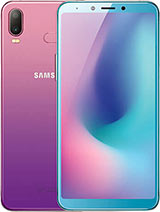 I m using that phone n it has google play store....

1. Pop ups appear again and again:
Google Play want to turn Bluetooth on. Allow / Deny
2. When a photo is taken, it takes around 5 minutes to appear in gallery, prior to that nothing is shown in the gallery. Any solution, please...
3. A number of spelling mistakes around. Strange to know. Is it really Samsung...

ThatBoyEddy, 29 Mar 2019I recently bought one in China.Love the UI and speed its sm... moreHey Eddy, did you fix it yet? My situation is same as yours. Desperate for a solution.

Anonymous, 11 Jun 2019Its notSomeone said yes but some said no. Please let me know how can i ensure the A6s equipped with google play store before i place order. Thanks.

Anonymous, 11 Jun 2019Its notDoes it means some equipped google play store n some not? How can i know it is equipped with play store b4 i place order? Thx

ThatBoyEddy, 29 Mar 2019I recently bought one in China.Love the UI and speed its sm... moreuse WiFi for first time to update your phone.

Ace., 29 Mar 2019Does it have always on display?... how good is battery life... moreOf course. It's an amoled display as mentioned above in the specsheet.

B4 i buy Samsung Galaxy A6s from 'Taobo', please let me know whether the phone has already equipped the Play Store app? Thanks

Does it have always on display?... how good is battery life and camera?

I recently bought one in China.Love the UI and speed its smooth.I hate one thing however i cant seem to install google play store on the device,its been a pain as most apps are not even working including the default browser,each time i get the notification "install/update google play services on your phone to start using Samsung Internet Services" but the phone wont even install any google store app.That sucks so much.When i try to install the play store apk at times i get the notification "Google services not supported by device' ...wasted my money

Its Looks Like Oppo a83 or vivo y71 for me
But i guess it just have a dual camera...
Naiss

dann, 20 Jan 2019This phone is a bit strange. They have always had original ... moreI guess, thats because cuting cost.. Not only this A6s phone, but also A8s, and M10, M20. They all looks like Chinese phone (Honor, Xiaomi), if there is not Samsung name on the back, and Samsung UI, nobady will know who made those phones. Originality for Samsung will stay only in flagship Samsung phones phones.

guys lets be honest. that xiaomi is cheap cuz the distribution and flash sales and they don't use ads on anywhere except online. and Samsung just advertise their phones almost everywhere. im not trying to fanboy or something. but ppl have their own opinion. so for this price range its actually a bargain (not counting xiaomi). also poco have downsides too, like it gets slow after just several months and the quality of the phone like the lcd (probably they did this cuz they wanna make this really that cheap). and if u want a better phone. why not buy oneplus 6t or note 9 instead, these phones are just way better than poco and has a lotta features.

SYED MEE, 26 Jan 2019poco have lot of problam this price range Still a lot less than Samsung phones.
Specs compared to price are worst along with Samsung UI which is nothing else than a bloatware.
If you get inside your phone tons of viruses and malware it will be a lot better than having a Samsung UI.