We knew that Samsung is prepping to launch its first ever triple camera smartphone but we didn't expect it to be so soon. Behold the Samsung Galaxy A7 (2018) - a smartphone with three cameras on the back that should only cost a fraction of the Huawei P20 Pro's price. 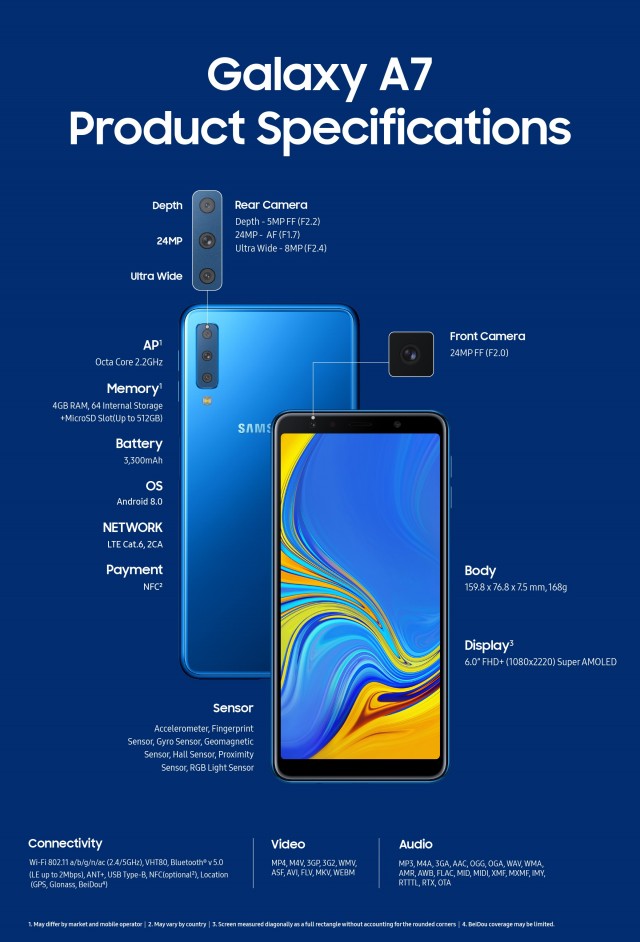 Obviously, the centerpiece of this year's Galaxy A7 is the triple camera setup on the back. You get a 24MP primary sensor behind an f/1.7 lens, an ultra-wide 8MP f/2.4 module with 120° viewing angle and a 5MP depth sensor.

The smartphone is powered by a 3,300 mAh battery and runs Android 8.0 out of the box with Samsung Experience on top. As far as biometric security is concerned, the Korean giant takes a different approach this time by integrating the fingerprint reader on the right side of the frame.

Back design and colors

Keeping up with the trends, the Samsung Galaxy A7 (2018) offers slightly curved front and glass back while the side frame isn't specified, but seeing that it has no antenna lines it's likely made of plastic. The available colors are blue, black, gold and pink.

The handset will initially launch in select European and Asian markets and will gradually expand this Fall. Samsung is hosting an event on October 11 at 5:00 PM (MYT), where we should learn more about the phone itself while the pricing has been officially disclosed by Samsung as €350 ($410) and will be just about the same for all regions.

Good Move Samsung, all you have to do is be little aggressive in pricing. 24K is good amount for a mid-ranger, especially with heavy competition. Samsung software easily beats the likes of Mi, Oppo, Vivo, 1+

Perhaps they want to pick LG phone user interest (such as me). The super wide angle camera is a very helpful tools for my daily work.