The Galaxy J3 (2016) comes in an ordinary white box, which doesn't contain much other than the basics. You get an AC adapter (5.0V/1A) and a USB cable. The charger is even less powerful than the 1.5A one in the J5 (2016) for some reason. You do also get a pair of headphones.

The device is quite compact with a footprint of 142.3 x 71 x 7.9mm and tipping the scales at 138g. Bear in mind that this includes the 2600mAh battery as well. And even better, it is easily user-accessible by simply popping the plastic back cover - a useful feature that is becoming less and less common with the push towards slim, metal, unibody designs.

The Galaxy J3 (2016) shares the same overhauled and modernized design of its bigger and more expensive siblings. However, in terms of materials, it is much more reminiscent of the previous generation in that it relies entirely on plastic. 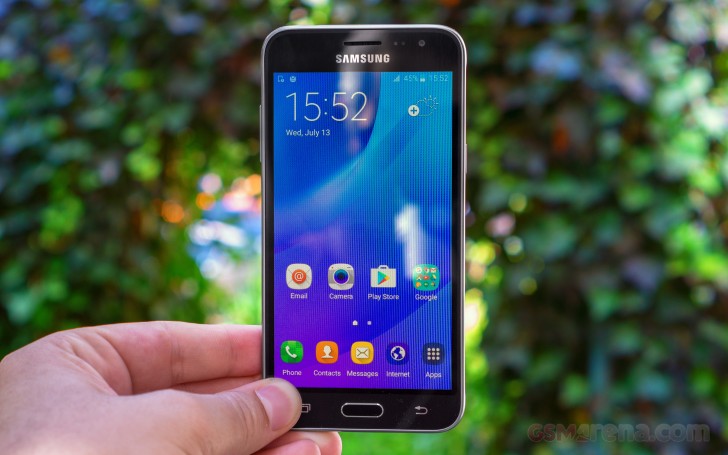 Plus, thanks to clever coatings and painting techniques, the body does give off a metal look. Other than that, the small details are taken straight from the new Galaxy J design manual. The frame is chamfered at the front and back while the sides are finished in the phone's main color. They're also flat, for better grip.

At the back, the plain plastic cover of yesteryear is replaced by one that imitates brushed metal. While there's a camera bump, it's not irritating.

As for the main speaker and LED flash, they are still where you would expect them, on either side of the camera. These two are rather reminiscent of Samsung's older design language.

Up front, the Galaxy J3 (2016) display is not afraid to flash some oversized bezels but it's actually alright. Below it, there's Samsung's traditional Home button, which feels nice and responsive and gives pleasant feedback. It's surrounded by a capacitive Task switcher on the left and a Back button on the right. A quick double press of the Home key would start the camera.

Above the display, there's a front-facing camera on the right. Unlike the J5 (2016) and J7 (2016), there is no front LED flash, just the earpiece and proximity sensor. The phone lacks an ambient light sensor as well so the brightness level can only be adjusted manually.

The power button is on the right while the volume rocker is on the left.

Power/lock on the right, volume rocker on the left. No surprises here

At the bottom, you'll find the microUSB port and the main (and only) mic. The top houses the 3.5mm headphone jack only.

Bottom and top of the device

Removing the back cover reveals the 2,600mAh battery as well as the microSIM and microSD card slots.

The battery is removable

Overall, the Galaxy J3 (2016) manages to punch above its budget in terms of look and build quality. Everything is nicely finished, tightly put together and just feels sturdy. The weight distribution is a little uneven, but still, the phone feels nice in the hand.

About the J3 2016 not having Sound Alive and thus not a sound EQ is wrong. There is a bypass for it. Go to spotify > settings > sound EQ and you get the sound EQ back. Now how silly samsung is to remove the feature in their stock settings,...

My Samsung J3 does not save media files on gallery