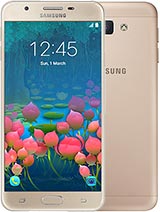 They r releasing this phones because they lost many money on note 7 explosion...thats why tft screen.. low camera.. no sensors...and too much price

Waiting for this update now I have used each night every handset of Samsung it's really awesome please release it soon it gives awesome look too waiting for u j5 prime.....

j5(6) must be better then...mby a bit slower processor but bigger battery +Amoled

If you consider fingerprint is essential, buy this. If you compare it with J5 (2015) I see no other reason.