The Galaxy J7 (2017) comes packed within a paper box accompanied by a cheap-looking pair of headphones, a regular microUSB cable, and a 5V/1.55A wall plug.

The Galaxy J7 (2017) measures 152.5 x 74.8 x 8 mm - close to the Galaxy J7 (2016) footprint but slightly narrower thanks to the impressively narrow bezels. The new J7 has gained 11g of extra weight though, attributed to the solid aluminum unibody.

Samsung has been trying out the premium metal build across different segments of its portfolio. The J series finally gets a taste, and hopefully we'll see it in even more of Samsung's midrange devices. 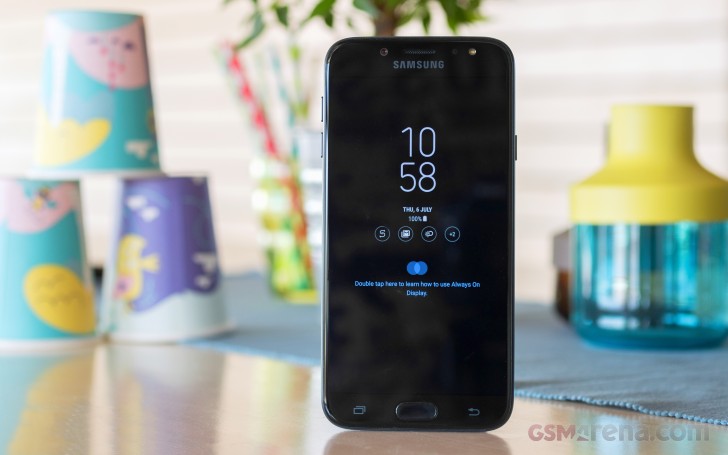 The Galaxy J7 (2017) is a well-built device with a sturdy 2.5D glass at the front and metal all across the rest of the body. The seamless aluminum unibody is an instant eyecatcher, along with the signature antenna strip design which Samsung has gone for. Instead of trying to hide those as most manufacturers do, the designers here have decided to turn them into a prominent design feature for the back. 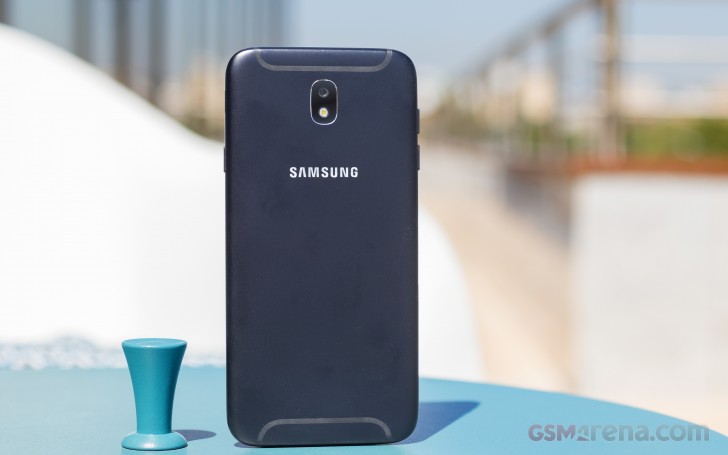 For this to work, the designers even chose contrasting colors for the antenna lines on some of the color versions of the phone. Only on the black model are the lines black too, so they are less noticeable.

The display glass on the front gets easily smudged with fingerprints and is tough to clean, so there is no oleophobic coating there for sure. The back, however, is not only fingerprint resistant, but its smooth matte surface actually makes for a secure grip.

A curious fact is that this "black" version we have here for review actually looks indigo or navy blue under certain light conditions. 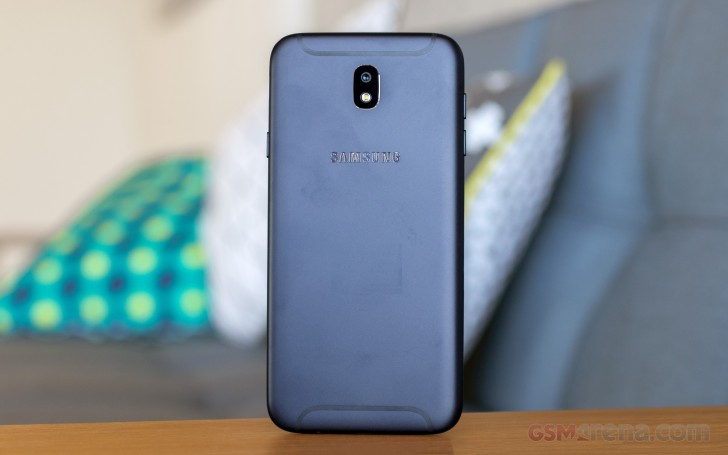 Handling the Galaxy J7 (2017) is a fine experience - the phone feels sturdy, fits well in hand, and won't slip in spite of its round edges. Sure, the J7 may not be the best device for single-handed use, but it's a very reasonably-sized phablet with a solid claim for a premium build.

Above the 5.5" AMOLED screen is the earpiece flanked by the new 13MP selfie camera and the front LED flash. A couple of sensors are also placed nearby, but those are barely visible on the black model.

Samsung brought back the good ol' clickable Home key for the Galaxy J7 (2017), while the Task Switcher and Back keys are touch only. The always-on fingerprint scanner is incorporated within the Home key surface and works quite well.

The left side of the Galaxy J7 (2017) is quite busy - there are two ejectable trays below the independent volume keys. The first one holds the primary nano-SIM card, while the one to follow has places for another nano-SIM card and a slot for expanding the storage with a microSD card. We are glad Samsung found a way to fit all three slots in to the Galaxy J7 (2017) instead of choosing the hybrid option.

The loudspeaker grille and the power/lock key are on the right side of the Galaxy J7 (2017). While the speaker placement isn't that new - the 2017 A series has the speaker at the same spot - you have to be mindful of it so that you don't muffle it accidentally, especially in landscape orientation.

The speaker is on the right • the power key

There is nothing of interest on the top of the Galaxy J7 (2017). The bottom has the microUSB port, the audio jack, and the mouthpiece. We wonder why Samsung went for the older microUSB port, while it has already phased it out in the A-series and the S-series for the newer reversible USB-C port.

The top is bare • the bottom • the audio jack

Finally, the new 13MP main camera with f/1.7 bright lens is on the back coupled with a single LED flash. Unfortunately, the new J7 has lost all access to the battery due to the design change towards unibody. Honestly, we don't mind the trade-off.

The 13MP main camera is on the back

Amazing build quality. bought in 2017, using daily for 3 years now. The phone is working like the 1st day I bought it. Buttons, USB, head phone jack, no tiring of the materials whatsoever. The battery lasts forever, about a week with power savings on...