The Galaxy M31 has a pretty simple and minimal design. The front of the phone has the display going right up to the top edge with a notch for the front camera. At the bottom is a small chin that's not too distracting and serves as a place to rest your thumb while watching videos in landscape mode. 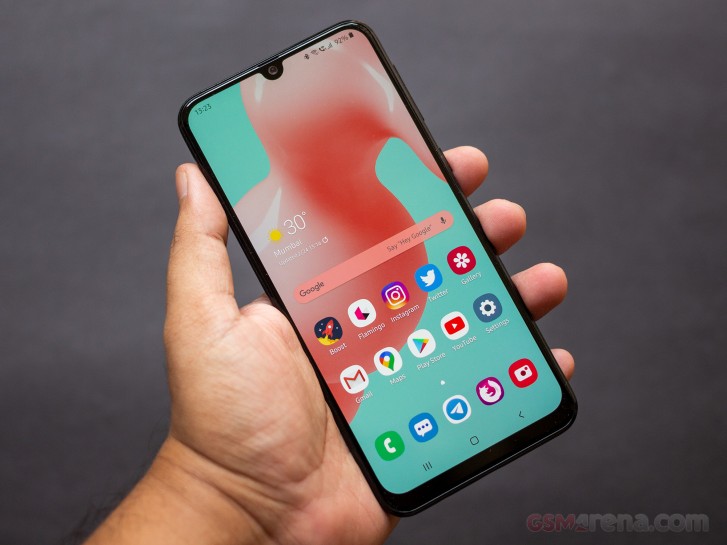 Samsung recently rethought its strategy when it comes to side buttons. The extra button for Bixby is gone and the volume button is now on the right above the power button. Whether you prefer this layout is up to you but we did find the volume buttons placed far too high up to be used comfortably. The only time they are easy to access is while holding the phone sideways. On the plus side, the buttons are firm and feel good to operate.

On the left side is a tray that holds two nano SIM cards and a microSD card slot. It's good that you don't have to sacrifice one of the SIM slots if you wish to use a microSD card.

The bottom of the phone houses the headphone jack, a USB-C port and a single loudspeaker. 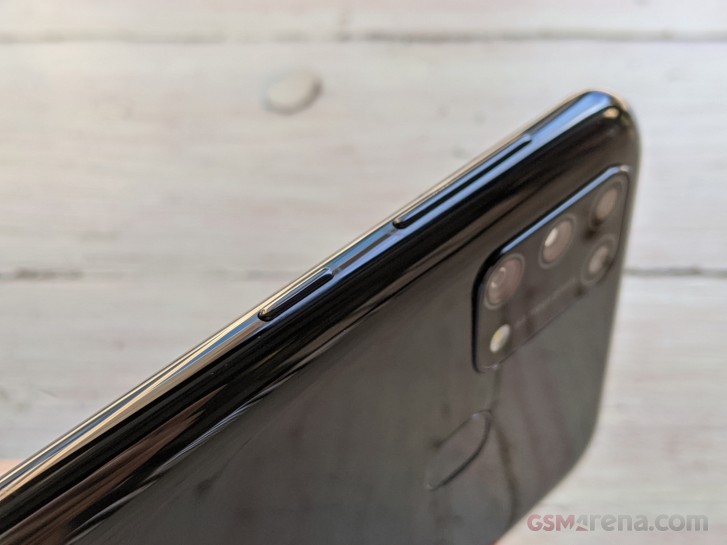 The back of the phone houses the camera in the top left corner. The design is similar to that of the M30s but with an extra lens thrown in there. The camera cluster is the only major visual difference between the two phones. Next to the camera module is a fingerprint sensor, which, like the volume buttons, is placed a bit too high. Perhaps Samsung things people hold their phone in the middle, like they do in product shots, and not at the bottom supported by their pinkie finger, as they generally tend to do. 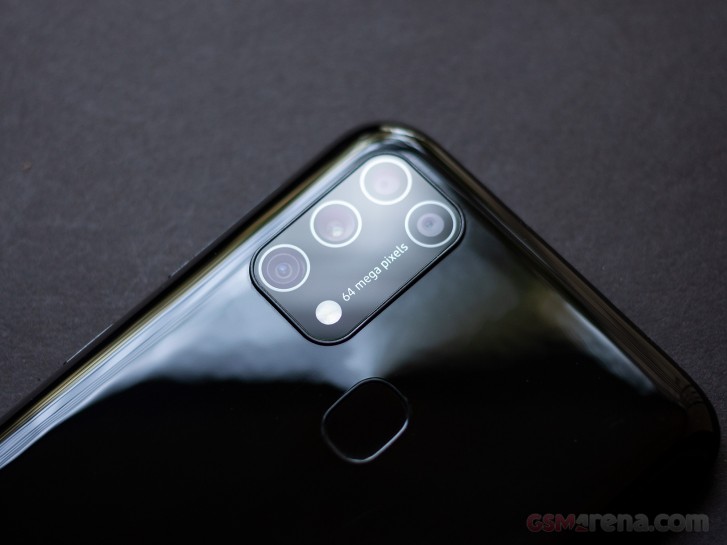 We mentioned in our Galaxy M30s review that the fingerprint sensor on the back was substandard. It required you to swipe your fingers to register your print and the phone took much longer to unlock than expected. The fingerprint reader on the Galaxy M31 is excellent. You can just tap the finger to register your print and the phone unlocks lightning fast with just the lightest tap on the sensor. It's good that Samsung chose to take feedback on the lackluster sensor on the M30s and implement a better one on the M31. 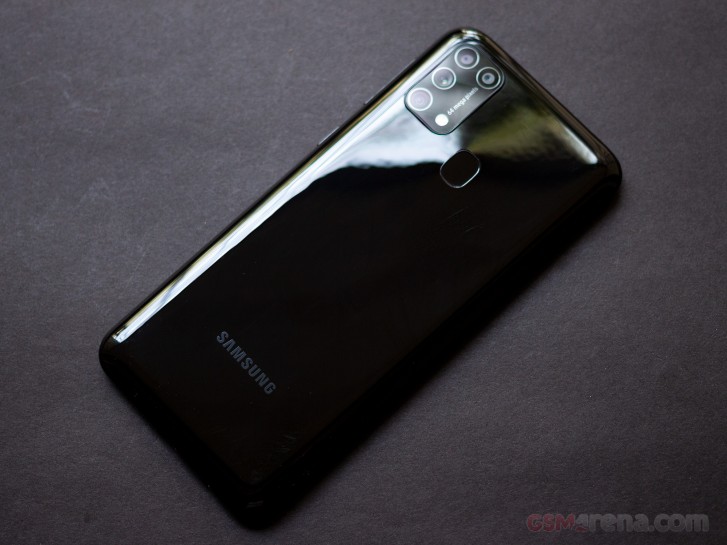 The back of the phone is a massive fingerprint magnet, especially on our black model. You can clean it but it never cleans thoroughly and it only takes seconds for it to get greasy again. The plastic is also soft so every time you wipe it it also picks up hairline scratches.

The other annoyance with the plastic is that the surface of the back is uneven. You can see this when light hits it and just gets warped. The plastic is especially bumpy around the fingerprint sensor and the area between the camera module and fingerprint sensor was also slightly raised on our unit, which doesn't look very pleasing. This is not a premium-looking device by any means and if that's something that matters to you then you will be disappointed.

The Galaxy M31 has a 6.4-inch, 2340x1080 resolution Super AMOLED panel. Samsung likes to call this their Infinity U Display, due to the U-shaped notch at the top.

The display on the Galaxy M31 is good, if not perfect. Out of the box, it comes set to the Vivid preset, which has wildly oversaturated colors that throw color accuracy out of the window and makes you feel like you're on psychedelics if you are used to calibrated displays. We prefer to use the device on the aptly-named Natural mode, as it tracks the standard sRGB color space more accurately. 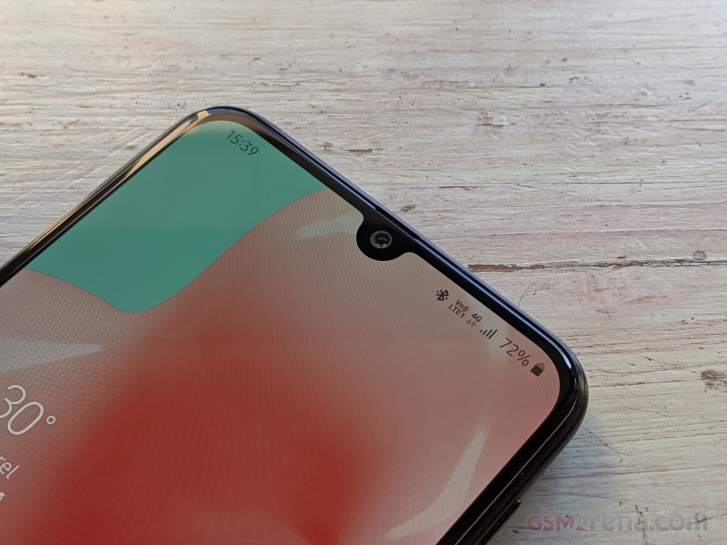 The viewing angles are adequate but not as good as what we see on AMOLED panels on more expensive devices. Even when viewed slightly off axis, the colors tend to lose their warmth as the reds in the image desaturate. The image also gets a very distinct green tint to it, most noticeable in the whites. This isn't easy to notice outdoors or in bright light but in the dark it's hard not to notice. 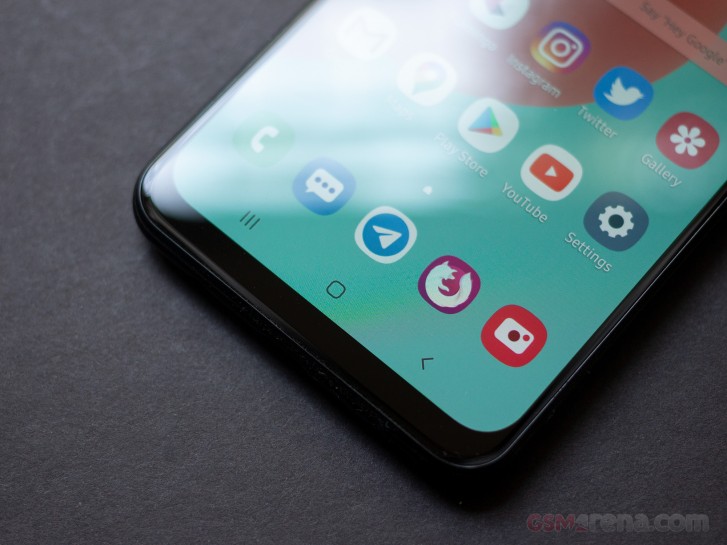 The display on the Galaxy M31 announces itself as an HDR panel in software, even though Samsung doesn't market this feature. YouTube and Amazon Prime Video apps switch to showing HDR versions of their content wherever possible but Netflix doesn't see the device as HDR. However, the HDR performance isn't good, not just because the display doesn't get bright enough for HDR but also because it lacks wide color support. Due to this, HDR content just ends up looking like SDR content, and at times even worse because it's dimmer. Samsung should not have set the screen to announce itself as HDR in software.

These issues aside, we were generally pleased with the display on the Galaxy M31. It's a great display for the price and most people would just be satisfied with the fact that they are getting an AMOLED panel instead of a LCD.

Stop lying, it's a hardware issue.

Phone is a mid ranged budget phone that meets your needs.